It hadn’t rained in the night, which made a change, but the night time temperature had been the coldest yet. I had worn two shirts, plus a fleece, plus a windbreaker beneath my sleeping bag, but had only slept in fits and starts. I desperately needed to buy some warm gear when I next reached civilization.

It was sunny in the morning. I brewed coffee at the picnic table next to my tent and watched the water of the Tyenna flow past. Soaking in the sunlight I could put the cold night behind me and I began to look ahead to the day’s fishing. The river was clearer and lower than yesterday and I thought there was a good chance of catching it at a very good time. Falling rivers are an excellent occasion to encounter hungry trout.

After breakfast I drove to the spot where the day before I had seen five fishermen standing around their cars. It was a railway crossing in between private property signs, meaning I could gain access to the river from here. It was a good thing that I had seen the fishermen beside the road yesterday, otherwise I would never have known about this access point.

I followed the rail tracks for a while and when I reached the river I walked downstream. The Tyenna wasn't as heavily stained by tannins as the Styx and Florentine were. I watched the water as I went and, failing to see any rising fish, I cast a GRHE into a pool, catching two trout. It dawned on me that Tasmania’s brown trout possessed the most wonderful red markings as a general rule. 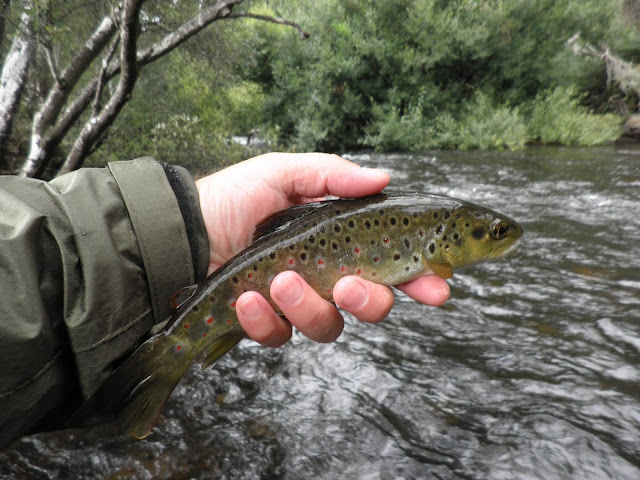 I moved downriver and continued to catch trout with a black tungsten nymph (the extra weight was needed in the swift flowing water). After a while I then retraced my steps to new water upriver. I fished above a disused railway bridge where I caught a trout with a parachute Adams, and then followed it with a portly 12" trout in prime condition.

I entered a very bushed-in and secluded section of the river, which I imagined to be hardly fished given that there were few places to cast a fly with ease. It was here that I hooked a trout of around 16” and would’ve landed it if I had a landing net. It was defeated, lying on its side, but I just couldn’t retrieve the fish close enough to my hand in the strong current. When I reached down and clutched the tippet with my hand - unable to move up or down the bank because of trees - the fly popped out the fish’s mouth and it bolted to freedom. It was so agonisingly close to being my best fish of my trip to date!

I saw four platypuses in this tree shrouded section of the river, and they came quite near to me as I waded midriver. It was mesmerizing to be so close to such an iconic Australian animal, and without any fanfare about it. Still, I was a little uneasy in their presence. I'd read that platypuses are among a select few mammals which are venomous. Males secrete venom from a spur in their hind legs which, whilst not fatal to humans, is said to be so excruciatingly painful that victims are temporarily incapacitated. I made sure to keep a reasonable distance from them just in case.

By then I had caught 12 trout and was thoroughly enjoying myself. I decided to return to my car so that I could explore another section of the river. Along the way back downstream I spotted a splashy rise ahead of a large rock in a deep pool. The river was completely covered by low hanging trees and it was a difficult place to wade and cast to the fish. I snuck up behind the trout and managed to flick my dry-and-dropper flies into its path. My efforts were rewarded when a 14” trout took the parachute Adams and came to hand. It was a very well-conditioned trout and it made my day.

I drove towards Karanja to fish another section of the river, where I caught three more trout whilst high sticking with the tungsten bead nymph. I lost a very fat trout here, quite possibly the largest of the day. The trout took the fly very close to me, and I had to stretch on to my toes to lift the rod to set the hook. I lost my balance in the fast current and, overcompensating, I fell into the water face first. The fish was all the while stripping line like a freight train. Just when I found my footing and emerged drenched from the water, the trout ended its run and turned back towards me. In that instant I could see its sheer size, and I began to pray. Of course, I hadn’t set the hook very firmly in the strike, and after a few head shakes, the trout was off. It was bitterly disappointing but I did see the funny side of my ignominious fall. 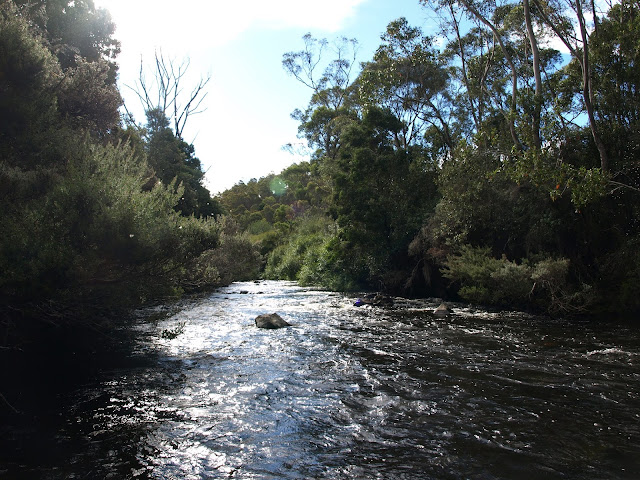 I also hooked a lost a rainbow trout in this section, a single outlier among a day of Tasmanian brown trout.

It was an excellent and most engaging day's fishing, made all the more memorable by a few hauntingly near captures of larger trout. I could now see why the Tyenna was described to me as the most popular river to fish near the island state's capital.

The weather was never quite sunny. It was mostly overcast, with a few spells of rain showers, but despite that I could feel that my face was a little sunburnt. I hoped it was a sign that the weather was at last beginning to turn.

And with that, my fishing visit to the southern central region of Tasmania had come to a close. I had barely scratched the surface, but I needed to move on, to explore other regions of Tasmania in my all too brief visit. Tomorrow I intend to drive to Tasmania's central region where its world famous lakes and lagoons are found. Tasmania if you aren't aware is most famed in a fishing sense for the quality of its lake fishing where large brown trout may be stalked in clear waters. But, to coin a phrase from the Scots poet Robert Burns, the best laid plans of mice of men often go awry...