In January and February 2015 I spent three weeks in Tasmania. It was the first stop on what would become a year's trip of trout fishing around the world. This sojourn was my first real experience of camping and also of travelling alone, so in many ways it was a seminal occasion. I look back on it with much fondness for those reasons. At the time, I only wrote a single report about my trip, a summary, which glossed over many of the events and details. I have long felt that I should return to my handwritten notes and do the trip justice. A catch-up series is to follow.

On 20 January 2015 I flew overnight from Johannesburg to Sydney, and then caught a connecting flight to Tasmania’s capital city, Hobart. I would stay in Tasmania for 20 days before moving on to the South Island of New Zealand. My plan was to spend two days looking around Hobart and then collect a rental car on Saturday 24th. I'd then spend two weeks on the road with the freedom to explore the island state’s famous trout fishing. I brought along a tent and a sleeping bag to camp out on the island along the way.

The weather was good on my arrival. Over the next two days I took in the sights of the city, dominated of course by Tasmania’s convict history. I enjoyed my visit to the Convict Penitentiary and learned much about the absorbing history of this island. The locals I spoke to seemed very proud of their heritage. I also visited a fly fishing store and bought a state fishing licence, some local flies, and Greg French’s masterful guide book ‘Trout Waters of Tasmania’. At an outdoor store I bought a pair of gaiters to protect my lower legs from snake bites. Tasmania has just three species of snake, but all of them are venomous, and they're quite prolific.

It was the first time I had ever travelled solo. It felt slightly odd at first and, admittedly, a little lonely. But I would soon get used to it and come to enjoy it.

I spent three nights in a stuffy, windowless hostel dormitory in Hobart. I was itching to go fishing, to break free from the shackles of the city and my soulless dorm room. I walked to the offices of my rental car company and asked if I could bring forward my rental by a day. ‘Unfortunately not, mate’ said the attendant with a shake of his head. On the final night in the hostel I almost had the entire dorm room to myself, but then two Spaniards arrived in the night. I was gone the next morning before they had woken up.

I felt an unbridled sense of liberation as I watched the city recede in the rearview mirror of my almost new Toyota Camry. I followed Highway 1 and then the A10 in a north direction. My destination was a trio of rivers in the Southern Central belt – the Styx, Tyenna and Florentine. I had helpfully been given directions to a place to camp in the North Styx Forest Reserve by an attendant in the fly fishing store in the city. I was excited but also slightly nervous. ‘Are you sure I can just camp anywhere I want in the forest? Is it safe?’ I am, after all, originally from South Africa and camping alone in the woods wouldn’t be the most sensible thing to do in my homeland. ‘Of course, mate. Go on and enjoy yer’self. Just watch out for the snakes.’

Along the way I stopped in at the Salmon Ponds Hatchery on the Plenty River which in the 1860s was the first place where trout ova were reared in the southern hemisphere. It was from here that the ancestors of every brown and rainbow trout in Australia and New Zealand today were raised. I paid $2 for a tub of pellets and had fun feeding the trout and the somewhat grotesque looking salmon. It isn’t very politically correct in these enlightened times, but I offered thanks to the Victorian acclimatisation pioneers who put so much effort into transporting precious trout to the southern hemisphere. If it wasn't for them, I wouldn't be here.

The attendant in the fly fishing store in Hobart had also helpfully given me the exact distance to travel along the gravel Styx Road before I should look for a discreet gravel track leading away from the main road. ‘Blink and you’ll miss it’ he had said. The track was rough and ran for about 100m downhill through the Styx Forest before it ended abruptly at the Styx River. Nobody was present. The river was dark, its waters tea-stained by tannins leached from the buttongrass plains in its headwaters. Perhaps its dark colour was the reason it was named after the dreaded river in Greek mythology (the boundary between Earth and the underworld). The river's edge was heavy with rainforest, including sassafras, myrtle, dogwood and manferns. The place had a primeval feel to it.

After setting up my tent I went fishing. I caught nine brown trout in a few hours of glorious evening sunshine, saw a platypus, and went to sleep content and flushed in new adventure, awfully proud of myself for cracking this solo camping whizz. It was so warm that I wore only a t-shirt and shorts to bed…

I woke up at 1.00am shivering and chilled to the core. I didn’t have a camping mat because I had wanted to travel light and thought I could forego one. I was sleeping on the cold ground with only my tent’s waterproof base between me and the earth. I am now very much alive to the importance of a base mat when camping! By 5.00am I was sitting in the car with the engine on and the heating at full blast. It had started to rain by then and little did I know at that exact moment that I wouldn’t see a completely rain free day for another ten days.

When preparing for my visit to Tasmania I made the error of lumping in its climate with the rest of Australia. I thought I would arrive to sun and heat, because January is the height of summer in the southern hemisphere. In January 2010 I had camped my way up the east coast of Australia in sweltering heat. Sleeping in a tent past 6.00am proved all but impossible because of the heat. I had therefore only packed a single lightweight fleece jumper for this trip, and a very lightweight sleeping bag. It was a big mistake. Tasmania is much further south in latitude than the mainland and it has a cooler climate which is influenced by the surrounding ocean - typically variable and prone to gales and rain. Looking back now, the first ten days of my camping trip in Tasmania could have been spent back in the UK, then gripped by winter, for all I knew. It was cold and mostly wet, and the wind blew a tremendous gale most of the time. Even the headline of a local newspaper cried “Where has our summer gone?”

I was committed by then and thought I’d stop at a town on the way north to buy some warm clothing. Little did I know that there is quite simply nothing in between Hobart and Launceston but lakes and rolling hills covered in grey-green eucalyptus forests and farm pastures. Tasmania is the proverbial land that time forgot.

My plan for the day was to fish the Styx River at a spot north of Diogenes Creek bridge, said by Greg French to be one of the most productive places for fishing. The river was fairly wide with lots of boulders and pocket water. A shame then that the weather was very bleak. It was cold and a strong wind blew downstream, and the fishing was difficult for it. I fished for around 2.5 hours without seeing a fish or feeling a bump. I decided to head upriver to where I might find a section of the river more sheltered from the wind. 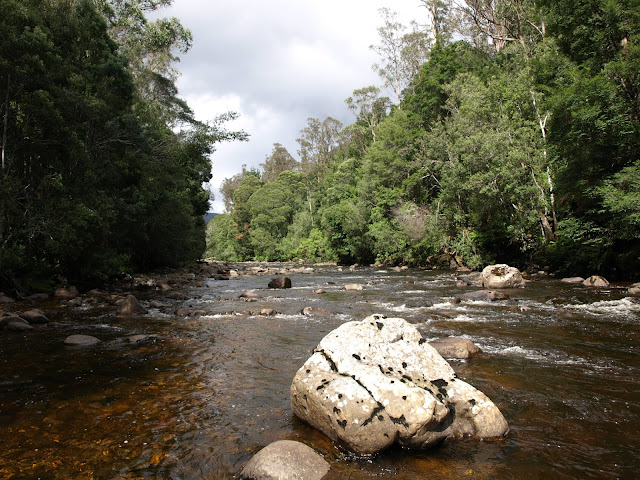 I drove to the Big Tree Reserve, which French suggested was one of the most scenic sections of the river. He was right. The forest was exceptionally mossy and lush. I stopped several times to admire colourful fungi growing on the trees, unlike any I had seen before. On the walk down to the river I spotted an echidna for the first time. It took fright at my presence and buried its head under a pile of sticks, leaving the rest of its prickly body exposed, which amused me.

I left the path and entered the water. The uniform persistence of the wind had diminished but the rain had increased in intensity. Notwithstanding the showers, I enjoyed immediate success, catching a 10” brown trout with a CDC & Elk fly. 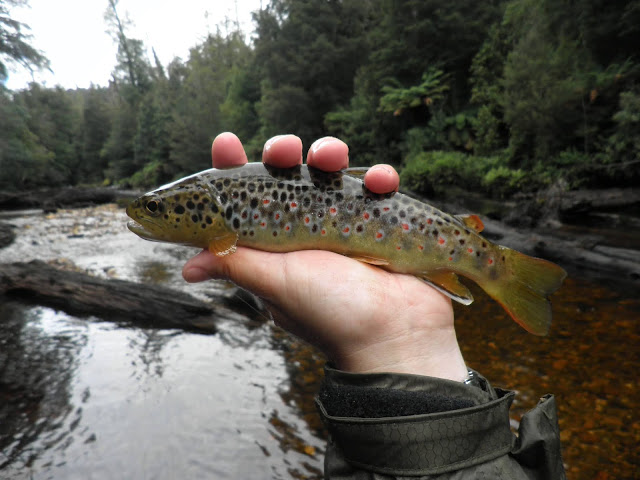 I watched for rises whenever there was a lull in the rain and managed to catch three more trout. The best of them was the last, measuring 11”. I spotted it rise against the left bank just before a torrential downpour which lasted several minutes. I stood stock still while the rain pelted down noisily on my raincoat and the water around me, all the while marking the place where I had seen the rise. When the squall passed, the clouds parted and the sun briefly emerged. I cast a CDC & Elk to the left bank and it was snatched by the trout. 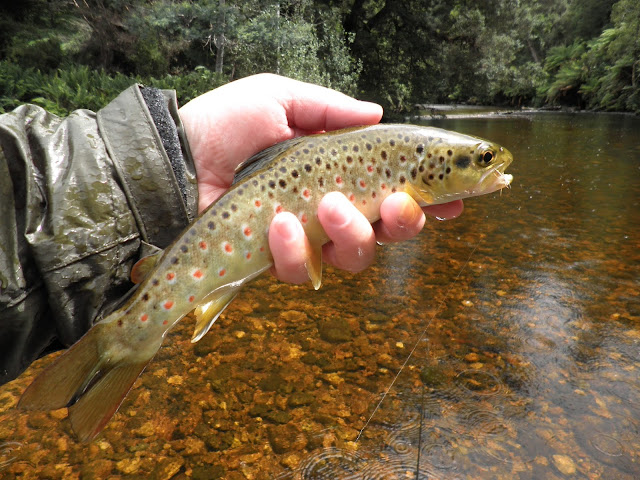 I stepped out the river onto a wooden boardwalk which the Tasmanian Parks and Wildlife Service maintains for visitors who wish to see the towering Eucalyptus regnans which give the reserve its name. It's not just their height (the tallest is almost 90m high) but the girth of these remarkable trees which render them among the largest and tallest eucalypts on the planet. They played a significant role in Tasmania's controversial environmental history and after a bitter campaign – fought by the likes of Greenpeace – were saved from the logging industry and added to the forest reserve system in 2013. They are seriously impressive trees and deserve to be protected.

I drove back to my campsite in the early afternoon, stopping along the way to watch a lone wallaby in the middle of the road. It stood very still and I wondered if it was displaying normal behaviour.  I hoped drivers of other vehicles would see it. I drove slowly so as not to damage my rental car but other vehicles went a fair clip on the gravel surface.

I decided to site my tent a little further up the bank because I was worried about the river flooding in the night given the continued rain. I tried to start a campfire, but the wood was too wet to ignite. I sat on the bank off the river and watched the dark water of the Styx flow past, enjoying the solitude. I was enormously happy to be on the other side of the world, next to a wonderful trout river, and making a success of it.

A small white mayfly dun began to hatch from the river and trout began to rise to them. I retrieved my rod from the car and selected a Light Hendrickson from my fly box, which was instantly consumed by a brown trout. It was the first of six trout that I caught in short order, and I packed it in by 3pm. By then it was just too cold and wet to continue. I enjoyed a hot pasta meal cooked on my gas stove, to which I added slices of salami, then read a book in my tent until nightfall, when I drifted off to sleep.