My final foray to a chalkstream in 2021 was to the River Wylye in Wiltshire, once again at the kind invitation of my friend Steve who is a member of the historic Wilton Fly Fishing Club. The club's trout season closes on the 15th of October, half a month later than most, and we took advantage of a fine weather forecast to hunt for trout mere days before the season's end. Despite a near cloudless sky and bright sunshine, the autumnal air was cool. A persistent wind plucked the yellowing leaves from the poplar trees which proliferate along the banks of this river. Winter is coming. I savoured this day in the knowledge that half a year will pass before I fish a chalkstream again.

The beat I fished was deep. My waders were pulled all the way up to my chest and at times I had to tip toe. On one occasion the icy water spilled over their rim, and trickled glacially down to my feet, the sensation quite unpleasant.

Soon after entering the water I hooked a hefty trout with a nymph from beneath the low hanging branches of a hawthorn tree, its boughs thick with red berries. The trout leapt from the water and my leader wrapped itself around a branch. Hawthorn is a hardy, unforgiving tree. The fish leapt again and then was gone. I was disappointed because it would've been my best fish from this river, but it was early in the day, and its interest in my nymph suggested that the trout might be primed to a late season feast before the winter famine. I was wrong.
The fishing wasn't easy. I thought that the grayling would be active, but other than a single 4 inch fingerling which took a nymph, they studiously ignored my flies. The trout were very spooky and seemed to be a little pre-occupied. Perhaps their instincts had already turned to the matter of procreation. As I progressed up the river, I could tell just by observing their static behaviour that they weren't in any great hurry to feed. No side-to-side movements or the swish of tails, usually the tell tale signs of feeding trout. They typically lay dead still, hugging the gravel bed. In one break from routine I witnessed around 30 trout swim from upriver into my pool, the school very animated, as if frightened. I have never seen such schooling behaviour in brown trout other than in visits to a fish farm.

I went an hour without any success and was never really happy that my fly was sinking fast enough in the deep water. Larger nymphs in sizes 12 and 14 - which did sink - were ignored. Smaller nymphs of the size I typically favour failed to sink deep enough. I eventually found a nymph in my box which seemed to possess the right balance between weight and size (a #16 jig hook nymph with a tungsten bead that dropped like a bomb in the water). I caught 4 trout with this fly, three before lunch and one after. 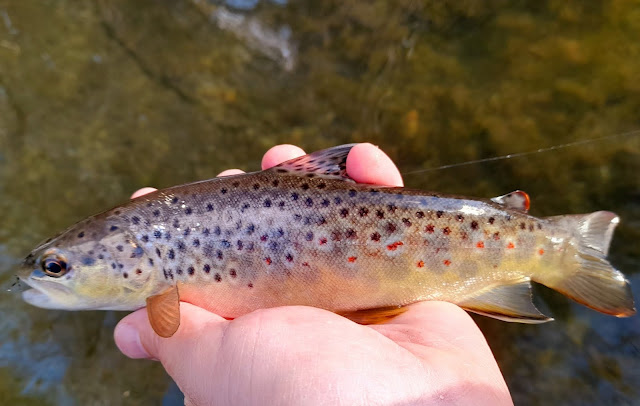 Steve explained that when a nearby road and power line was constructed, the club received a grant for river improvement works (perhaps flood defence is a better term). The club took a digger and canalised the river beside the road, creating a uniformly deep and slow flowing stretch of water. Seems a shame. The upside is that large fish enjoy this type of water and I witnessed several in the clear water. I went on to hook and then lose three more very good trout.  They all ran into the reeds, all very strong fish. I was powerless to stop them, and my heart sagged at the inevitably of their loss. The constant tension on the line even after they'd ploughed into the reeds offered false hope until the final confirmation, when the fly was unhooked from the reeds or the tippet snapped. The 4 trout I did land were between 10 and 12 inches long, and were those I was able to keep from fleeing to the sanctuary of the reeds.

One of the trout had another hook in the roof of its mouth, with around three inches of tippet still attached to it. The hook was bare, the passage of time obviously doing for any tying material that may once have adorned it. I used my forceps to try and remove the hook but it wouldn't budge. The line parted easily though. The fish jumped from my hands and for a second I held it only by the forceps clamping the hook, unyielding, before the fish was gone, back to the deep with the hook intact. I felt a little sorry for it. 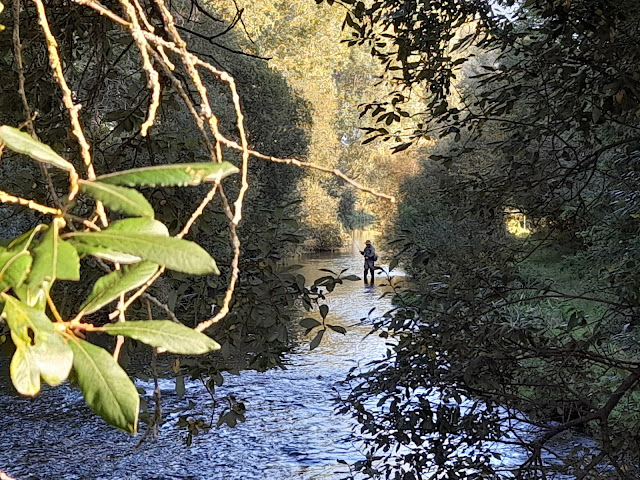 The highlight of the day came when I spotted the dark silhouette of a very large fish in the water. At first I thought it must be a pike, but then I could see it was a salmon with a very pronounced kype. It was huge. My initial thought was that it must weigh at least 20 lbs. To be safe, I'd say it was 35 inches long at a minimum but I think it probably went to 40 inches. According to the Atlantic Salmon Federation's chart a 35 to 40 inch salmon would weigh between 17 and 24 lbs, thus supporting the snap judgment I made of its weight. It was very exciting to see and I was thrilled that a salmon had travelled from the south coast, unimpeded, this far upriver. I returned with Steve after lunch to show him the fish, but it had moved and we couldn't find it. A little further upstream we saw another salmon, this one around 27 inches long, lying astride a clean patch of gravel which may have been a redd. I tread much more carefully when wading in the river after that.

The Wylye offers wonderful wild trout and grayling fishing. In three visits I have come to learn that it holds some impressively sized trout, thanks, I believe, to the tremendous variety of habitat and the keeper's light touch. I have failed to catch any of the larger specimens though, which have proven difficult to land when hooked. As with my visit at the end of the 2020 season I have once again been left to rue the escape of some very good trout.

For now, my season on the chalkstreams of Hampshire and Wiltshire has come to an end. I choose not to fish for grayling in the winter season. I dislike fishing in the cold. There's also something to be said about giving trout - and salmon - a break to get on with the job of making babies.