I was woken up at 03.00am by a noisy animal determined to enter my tent. I had some dried banana slices in the tent with me and it must've been attracted by their smell. It circled my small tent, growling loudly, and brushed up against the sides several times. Instantly awake, I shouted and banged my fist against the tent, and the animal retreated. Once the initial shock passed, I was intrigued to think it was a Tasmanian Devil, but they are rare, and I have since realised that it was likely a possum. I learned a valuable camping lesson that night, and from then on all food remained locked in the car boot.

It was another cold sleep in the tent, even though I wore multiple t shirts and even my jeans inside my sleeping bag. It had rained all night and was still raining when I woke up in the morning. I walked down to look at the Styx which was running high. The pebble stone beach in front of my campsite was only about a quarter of the size it was yesterday.

I decided to take a drive to see the Tyenna and Florentine rivers, the two other rivers in the area that I wished to fish. I suspected they too would be running high, but I was curious to explore the local area. I drove through the small settlement of Maydena to go and look at the Tyenna. From a few vantage points next to the road the river looked to be flowing fast and high. I concluded that it looked downright uninviting, and it was still raining. I spoke to two other fly fishermen along the way. One was rigging up a fly rod at his car but confessed that he had yet to check on the river’s level. The other seemed to think the river was fine but said that he hadn’t caught a fish or seen one all morning. I saw five more fly fishermen standing in a layby at another spot and then it dawned on me that today was a public holiday – Australia Day. It explained the crowds of fishermen.

I went to go look at the Florentine River, following a gravel track for 25kms, ever deeper into the mountains and forest. French’s book said the Florentine needed to be low for it to fish well, and I kept this in the back of my mind as an intermittent rain fell against my windscreen and I navigated around puddles of water in the road. I wasn’t hopeful, but when I reached a bridge and saw the river for the first time, it looked much better than expected. As with the Styx, the Florentine was also stained the colour of dark roast coffee, but even then, and even after the rains, I could see the substrate in the river in places. I decided to fish it. 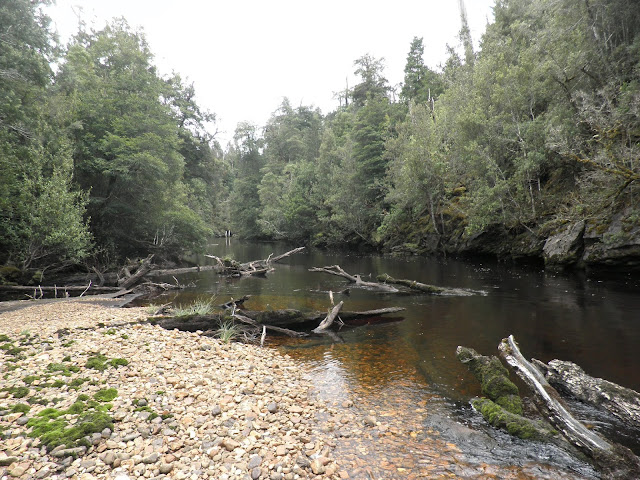 It was approaching 1pm when I set off, rod in hand, upstream of the bridge.  The river flowed through a low gorge with a series of very deep and slow flowing pools, far too deep to wade through. Large fallen trees lay scattered about the river. The forest beside the river was eerily quiet, making the dark depths of the river seem rather sinister. Fishing was a hard slog because I had to beat my way through the bush to get around the deep water and stone cliffs. The trees were so thick I had to dismantle my rod to make it through them.

I saw no rises or other signs of trout along the way, and I became careless whilst wading. Of course, what should happen? I almost tripped over a very large trout which I sent fleeing in panic. That renewed my interest for a while but eventually I felt that I must turn back because I was growing exhausted by the bushwhacking. Every step I took forward I'd need to take back through the bush to my car. I was hot and bothered and felt a little disappointed. When I did stop, rather than follow the river back to my car I took the decision to beat my way back through the thick tangle of bush in a straight line to where I knew the road must be. It was further than I thought and I was relieved to eventually stumble out onto the gravel road, vindicating my decision.

Crossing the bridge to where I had left my car, I looked downstream and noticed several trout rising to a hatch. My spirits instantly lifted. The water downstream was quite different to that which I had just explored. It was shallower and I could wade without any issue. Helped by a burst of afternoon sunshine the water was clear enough to spot trout lying between rich green trailing weeds, where they were rising to little olive mayflies. With much imagination I thought to myself that the river downstream of the bridge almost possessed the characteristics of a limestone river. I got a little carried away and even imagined that I could have been on the famous Derbyshire Wye!

I missed the first four rises to a #16 olive CDC fly. The first, a big fish, took my fly but the hook didn’t set. The second was hooked only for around 5 seconds. It was also a large, fat trout, certainly the largest I had yet to tussle with in Tasmania. The third was on for even longer before the hook came loose, and the fourth was pricked and spooked. How incredibly frustrating! I then watched a fifth trout react to my fly in minute detail. It finned backwards and upwards, effortlessly in time with the drifting fly, inspecting it for seconds, before it suddenly darted away upstream.

There were only a handful of rising trout left to target. I changed my fly to a #20 F fly and at last enjoyed success, catching two brown trout of around 12 or 13 inches each. I was delighted because I had already resigned myself to going home empty handed from this river. Even then, it had been a lot of fun casting to sighted fish and watching them react to the fly.

I found a national park campsite (Mount Field) on the banks of the Tyenna for the night and enjoyed the pleasure of a hot shower for the first time since Saturday morning. I cooked pasta on a picnic table overlooking the river which had dropped slightly and looked much clearer. I was very excited for the fishing to follow in the morning. As the evening fell, I watched mayflies dance above the water before the females dipped to the surface to lay their eggs. Surprisingly, no trout rose to eat them.