A diary of my visits to my club's section of river, somewhere in deepest, darkest Sussex.

I hadn't visited the river in 3 months and wanted to fish it at least one more time before the end of the season on 30 October.

When I arrived at 9.00 am, another angler was rigging up a rod in the car park. It's the first time in five visits that I have seen another angler, but then I realised that this was the first time I'd been on a weekend. All my prior visits had been in the evening after work, in the hour or two before nightfall. I met and spoke briefly with Gary before he chose to venture downstream. I was pleased, because I wanted to go upstream.

A lot had changed since my last visit in July. There was more water now and the summer growth on the banks had died away. The wildflowers were gone, except for one or two red campion which still held out. The land had been blanched of the rich green of summer. Trees were turning yellow and their leaves drifted to the ground in a constant fall. The temperature was reasonable, warm enough to only wear a shirt.

As I always do, I walked slowly and observed the water and fields. A flock of around 20 ducks erupted into panicked flight when I was seen. Sadly I saw a dead hen duck floating in the water, snagged against a fallen tree. Later I saw a dead goose on the bank. Something had been at its entrails. Many other geese flew west in a series of v-shaped waves, honking as the heralds of autumn. A pair of snow white egrets stood out like sore thumbs in the margin of a small farm pond, set 50 yards from the river. A heron flew gracefully upriver, and a buzzard mewed as I startled it into flight from an oak tree beside the river. Pheasant were ubiquitous, as they always are here, and fat grey squirrels busied themselves in the trees. A farmer was using a large motorised machine on the field on the hill to the north of the river, with long booms protruding from either side. I think it was a sprayer.

There were no signs of rising trout, but that was expected. With the extra water, I liked the look of a section of the river at the very top of the Stables beat. I hadn't fished it before. The water tumbled over a weir and for a while flowed swiftly, causing frothy bubbles. I slid down the bank and into the water, and methodically worked my way up the river. I used a parachute Adams as an indicator with a #20 flashback pheasant tail nymph tied beneath it, in the New Zealand style. No luck in the slower flowing channel, but my dry fly slowed just a fraction in the turbulent water near the weir, and I lifted my rod into the pleasing resistance of a colourful wild trout. Finding such delicate life in a sandy spate stream provides inordinate joy. 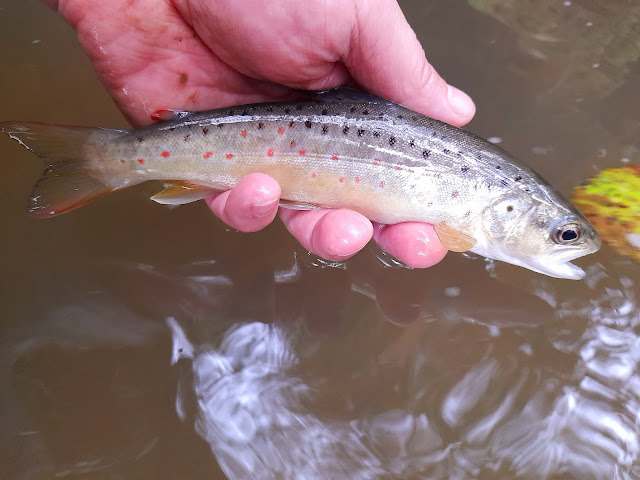 I walked past the Huts beat without seeing any reason to trouble the water. Into the Yurts beat, I slid down the bank to fish through a section of water I hadn't fished before. It was a series of three bends, with a good variety of water. I was disappointed not to connect with a fish. The water became too deep to continue wading in the channel, so I pulled myself up the bank by using a conveniently placed rope.

I turned to look back through the field and saw the chairman of the club and another member approaching, as they performed their regular Sunday morning inspection of the river. We spoke as they continued their inspection, pointing out recent tree falls and logjams which needed to be cleared by the winter work parties. We approached the most upstream pool of the club's water too hastily and spotted fleeing bow waves, the displacement suggestive of a large fish. The member said it was probably a pike, but that a substantial trout had been caught from that same pool several years before. I marked the spot for later.

I said goodbye to the chairman and member and doubled back, approaching the final pool from behind. The water was new to me as I hadn't fished this far upstream before. I worked a deep gutter along the far bank with a nymph to no avail, and then came to the pool where the large fish had moved earlier. The water had very little flow and resembled a pond. I had to impart a little movement to my nymph. From the head of the pool, I hooked a 6 inch trout, but the hook was thrown in the ensuing seconds. I cast to the head of the pool once more and hooked another 6 inch trout. This time the line stayed firm and I cheered inwardly as I brought the fish towards me. I was about to reach for my net but the trout wasn't done. It darted towards the opposite bank where tree roots offered it sanctuary. In a flash, a large fish emerged from beneath the roots and ate the trout. My tippet snapped. The attack was over in less than a second, and its ferocity and precision was truly something to behold. I processed what had just happened. The shape, seen for a brief moment only, was a pike. Long and streamlined, it had white spots against a dark body (unlike a trout). It was thrilling to witness, but very savage. I felt sorry for the little trout but with such a monster lurking in the same pool, it was probably living on borrowed time.

This will probably be my last trout outing of 2021. I still pinch myself when I realise my good fortune in finding trout in a river so near to my home in Sussex. Wading in the river is difficult and it isn't the most ideal to fish, but therein lies a challenge. The trout don't seem to be very prolific either. I averaged one fish per visit this year, but my visits were all fleeting. Most pleasingly, four out of the five trout were wild. I look forward to seeing what this river looks like - and how it fishes - in spring next year.