A few days ago I broke my Orvis Battenkill large arbor reel. I reached down to wind in my line and instead of finding a reel handle I clutched at thin air. Somewhere along the river the handle had parted ways in a clean break of plastic and metal. Coming off the back of two broken rods in the same week the demise of my reel was a cruel blow. I used the small protrusion of the counter weight to awkwardly reel in the excess line and then prematurely began the three hour walk back to my car. It had been a spectacularly poor day's fishing, momentarily interrupted by two rises to my fly, both of which I missed. To say I was a tad grumpy as I trudged back to civilisation is putting it far too lightly. If anyone reading this is planning an extended fishing trip to New Zealand I would strongly advise that you bring along a spare of everything. Find the space, it's worth it.

I bought a new Redington reel in Te Anau the next day, with a Rio line to go with it. The store owner had taken a real shine to me by now. I'd also hooked up again with Takahiro by this time. By coincidence we happened to be staying at the same camp site in Te Anau and I recognised his blue tent. It was a happy reunion if a little uncanny, given that we'd waved goodbye to each other hundreds of kilometres away. But then the South Island is a small place in a fishing sense. I often run into familiar fishing faces, all of them transient trout bums, just like me.
Takahiro and I went fishing the following afternoon. We chose one of the closest rivers to the town but it still needed a fair walk to reach from the nearest road. It was a pretty river in a wide basin of verdant farmland. The mountains of Fiordland stood tall in the distant west. 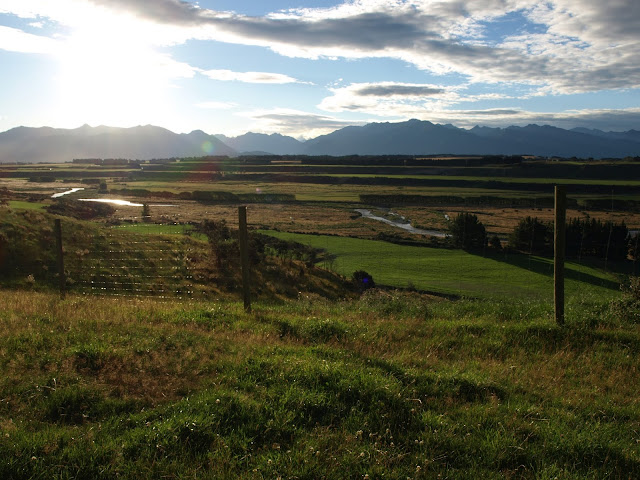 We went our separate ways, agreeing to meet again at a designated time. Shortly after venturing off on my own, I spotted a good sized trout, albeit I saw it late when it was only about two rod lengths away from me. I froze on the spot and was relieved when it continued to feed contentedly, rise after rise to prey on something miniscule in or on the water's surface. The trout refused nine of my suggested patterns but kept feeding happily nonetheless. I was amazed that it hadn't spooked. After around 45 minutes of futile effort, with some desperation I went for the hail Mary option, tying on a large Royal Wulff. The Royal Wulff is an incredibly successful pattern for me, but I have never seen anything which comes close to resembling it in nature. The pattern must possess a powerful attraction trigger somewhere in its design. The trout rose ever so slowly in the water on a collision course with the Royal Wulff - surely not I thought - and sipped it in as gently as a dandelion falling on the grass. I waited a second for the fish to turn down before I struck, as you have to do with these browns if you don't want to see your fly ricochet past your ear, and that's when the fireworks started. Moments like these make New Zealand such a rewarding place to fish. In the net the trout weighed a good 4 lbs. 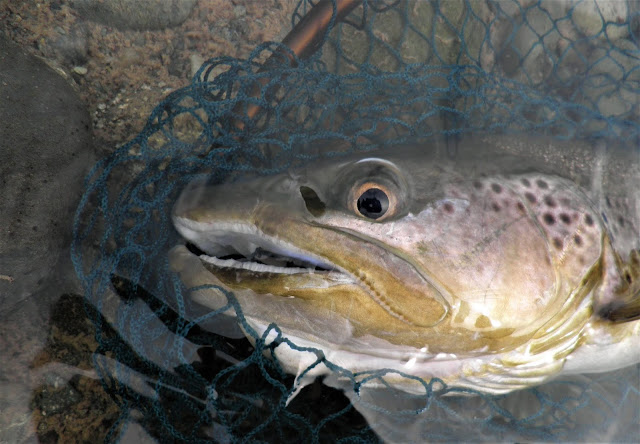 My guide book suggested rainbows were the predominant species in this river but I caught another brown trout shortly before it was time to leave. This trout weighed 2½ lbs. It was long and slender suggesting its best days were behind it - but it still provided me with enormous pleasure.
Not bad for a couple of hours spent on the water. Takahiro had enjoyed success too. I'm growing rather partial to these unheralded rivers, because you're almost always guaranteed to have them all to yourself and the trout seem a lot more forgiving.
Labels: New Zealand