A Bit of a Shambles

A report of my trip to the remote west coast river I mentioned in my last entry. This is what the author of a well known printed guide of the South Island's trout fishing has to say about this particular river:
“Only active, fit anglers should attempt this river, as there are no huts, tracks or roads in this valley. This remote, bush-lined, rough, bouldery, clear river offers great sight fishing for the fit angler who is unafraid to camp out. The best fishing lies well upstream where crystal clear greenish pools and runs hold a good population of medium and large brown trout. Wear overtrousers and take insect repellant for the sandflies. The upper reaches are now designated as a wilderness area so helicopter fly-ins are no longer permitted.”


Sounds great, doesn’t it? I decided to give it a go with my new Japanese fishing friend, Takahiro. We packed for 3 nights and 3½ days of fishing up this 20km long river. A small annoyance an hour into the walk upstream when I realised I had left my SLR camera in the car but no matter, I had my compact with me and I was grateful for the lighter load. Perhaps it was a portent of things to come. We pushed on upstream, with Takahiro, eagerly saying “we go up and find big fish in every pool”. I happily agreed with his obvious enthusiasm but the full meaning of his sentiment would only be understood later that day.
It was hard graft and slow going, but made a little easier by someone with the foresight to mark a rough track for us with intermittent pink ribbon and pink spray paint. Initially the path was quite noticeable and level, obviously fairly well used, but later on it became a little more steep and difficult to follow in the undergrowth. Quite often we would stray from the path then double back until one of us would spot the small splash of pink spray paint on a tree or fern and yell out “pink”. In some places the path had been washed away by landslides and we had to make a detour up the face of the mountain, balancing like mountain goats, and then precariously sliding and scrambling back down the slopes. It was energy sapping. We made it about 7 or 8 kilometres upstream in 8 hours, stopping for lunch and for Takahiro to rig up his rod and cast to a trout of about 3lbs which had risen to sip an insect from the surface while we watched it (he had no success).

We found a small gap in the trees to set up our tents for the night and decided it was as good a place as ever to stop for the day. Someone had once had the same idea as us as I found a tent peg buried between rocks in the beach sand, but given how rusted it was, it must have been some years before. Just as I had shrugged off my rucksack and sat down on a rock to rest, Takahiro declared the river to be devoid of big fish. He said he wanted to give up and go back early the next morning. I had just walked for a day with a heavy pack on, in hot, humid conditions, plagued constantly by sandflies, and I hadn’t even unpacked my fly rod. To say I struggled to see the funny side of it is probably an understatement and the ensuing conversation was likely lost in translation.
Takahiro did have a point in that we had only spotted a handful of fish on our journey upriver, and they looked to be around 3 to 4lbs. But we still had half the river to explore and my guidebook was clear that the best fishing lay well upstream. My fishing companion is amiable and means well, but he is quite obsessed with the notion of catching a 10 lb trout - to the extent that he seems to derive much less enjoyment from the vast bulk of fishing where that outcome isn't a realistic possibility. Takahiro explained that a well known Japanese fishing guide visited the nearest main town in 2004 and described many rivers in its vicinity which, after a bit of walking upstream, held trout of 7 lbs plus in every pool. I now understood his earlier reference and expectation. Whether a hopelessly false expectation has been created, or such rivers exist, I didn’t know. I mulled the predicament over in my mind as we set up our tents in a light rain, the rain doing nothing to help my mood. There wasn't an obvious compromise. We either continued with the trip as planned or walked out together the following morning. My rental car was parked in the middle of nowhere. Takahiro would be stranded unless he could hitch a lift. I also wasn't keen to hand over the keys to my rental car to allow him to retrieve his gear in the boot because I worried that our mutual grasp of English wouldn't extend to the intricacies of where to safely leave the keys for me to find later. The last thing I wanted was to return to the car and find myself stranded. But being relatively inexperienced at camping, I mostly didn't fancy going on alone in such a remote location for several days either.
With my tent erected I sat on the shore watching the water, mulling over the issue when I saw a trout leap completely out of the water right in front of our camp. In that brief moment the setting sun filtered through a break in the clouds and amplified the golden-yellow colour of its flanks to a colour which resembled freshly deposited leaves in Autumn. It splashed back into the water with a thwack, audible over the sound of nearby rapids. I called for Takahiro, who was in his tent out of the rain, to offer him the chance to catch it, as he had yet to catch a fish in our time together. I also thought it might change his mind. He poked his head out and waved his hand dismissively. I asked if I could use his rod which was already rigged up and standing on the shore and he agreed before going back into his tent with a squeal of the zip. I quietly entered the water and cast, too wide of the main current where I had seen the fish leap, then again, this time just right, as the dry fly (a mayfly pattern with a deer hair wing and a twist of hackle tied by Takahiro) disappeared in a gentle boil of water only just visible against the low sun. The fished again leaped in the air but this time in outrage and I followed it downstream where I could lead it to shallow water and land it. It weighed 4½lbs. As I was releasing the fish back into the water two eels emerged from the rocks. Ugly looking things. Perhaps they were aroused by the struggling throes of the fish and they curiously investigated the landing net lying in the water, still fresh with the scent of the trout. 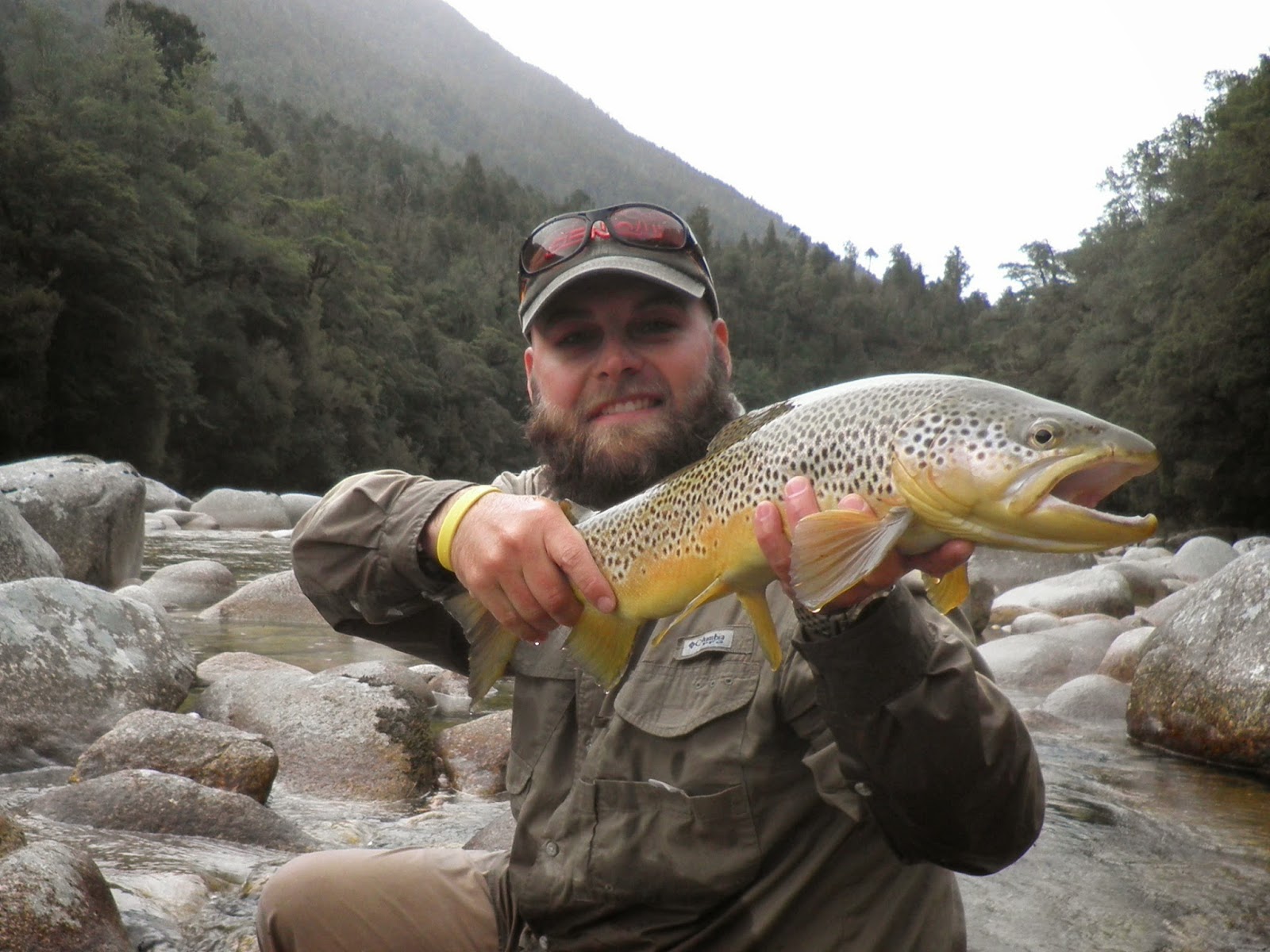 The rain had ceased by then and perhaps sensing my mood, Takahiro said “I’m so sorry but I just cannot go on fishing this river.” I acquiesced - better that than forcing somebody to be someplace they didn’t want to be - but with a compromise. There was still light for 3 more hours, I suggested that we walk upstream as far as we could to see if we could spot any larger fish to target the next day. Agreed, we set off but saw none, the task made a little harder under cloud cover and fading light. It started to rain again, harder this time and the large rocks on the river’s shore became very slippery. I slipped and fell and my rod tip snapped in half. Disaster. That settled the issue of bringing this trip to a premature end. It was my only rod. 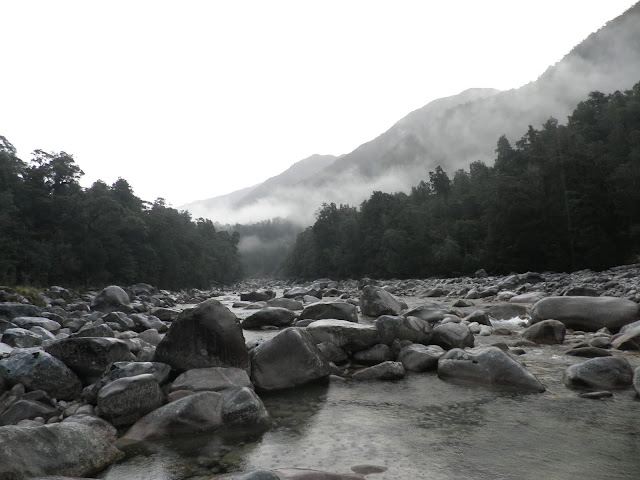 At that point I wanted nothing more than to be home (home being the modest comfort of the holiday park I was using as a base in a nearby town) where I could at least lick my wounds, have a decent meal, a beer and a hot shower unhindered by sandflies. We got back to our tented camp just as it was getting dark, with a mist creeping eerily up the valley, and I boiled enough river water for the hike back out the next day. I hadn’t taken along a lid for my pot and the water resembled a soup of sandflies by the time I was done.
We hiked back out the next morning under our still heavy loads (I’d planned on the weight of the food at least being missing on the walk out) and I was relieved when I saw the road bridge many hours later.

On the drive back to town, my dark mood lifted at the sight of a road sign advertising 'ice cold Coke' at the first cafe we came across. We stopped to buy a cold drink and even cracked smile when I took a refreshing sip. All in all this trip was a calamitous waste of time - the loss of two day’s fishing and a broken rod. At least I got a fish. Now it’s time to test how good the Orvis rod guarantee is!
[I would eventually return to this river, seven months later, to discover what lay upstream. You can read about it here: West Coast Redemption]
Labels: New Zealand