Just the other day I allowed myself to feel a little sorry for the trout of the South Island, well those around Reefton at least, which is probably a bit odd for a fly fisherman to admit. In less than a week I’ve come to realise that the trout here face an onslaught from anglers and those in the more popular rivers probably have flies chucked at them near enough every day. I’ve run in to fly fishermen pretty much daily here, or seen the tell tale sign of fresh boot prints. Seeing boot prints is heart dropping and you quickly start to beat yourself up about the extra 30 minutes sleep, and pray that it might only be a tramper and not an angler. Funnily enough, I’ve yet to meet a New Zealand angler. All the anglers I have encountered have been foreigners just like me - other South Africans, Irish, Norwegians and Japanese and in the local hotel at dinner time I overheard a group of Australians chatting about their fishing efforts.
You can spot a fellow angler a mile away by the sunglass tan, the fishing branded cap faded by the sun, the vented shirt and preponderance of khaki, tan and brown clothing. Cars parked in the town have rods in them, still made up and ready to cast at a moment’s notice and some sport bumper stickers like “Gone Fishing” or "Work is for People who Don't Fish" although these cars probably belong to the locals that fish. All of the anglers I have met have been incredibly cagey, keeping their cards pretty close to their chest like a dog with a bone - “Oh I got a 12lb’er in a river up that way” but in the next sentence they’re happy to provide precise directions to a river where you can catch loads of 3 lb’ers. I even suspect that a bit of deliberate misinformation goes on. There’s only one way to fish out here and that’s to cover ground and find out for yourself.
What all this means is that the fish are incredibly spooky (I’ve even heard that some refuse to eat in daylight hours) and I’ve quickly realised you just about get a maximum of two casts to a fish before something in the wind lets it know you’re there. It then either darts off up river or bunkers down and ceases to feed. I guess you could say New Zealand has become a victim of its exceptional fishing reputation, largely driven by the size of its trout. In the end you just have to adapt and be prepared to walk long distances to get away from the easy access points. Even then there’s no guarantee that you will find fish in the most pristine and trout suitable water you will ever see. Just yesterday I walked a total of 21km with Takahiro, a Japanese student I met at my camp site, and we spotted four fish. Even worse, the dreaded helicopter could deposit a wealthy angler ahead of you after you’ve trudged into the wilderness. I have seen or heard a helicopter every day here since I arrived because there is an airfield nearby.
I don’t want to dwell on the negatives. Indeed there’s just something about seeing large fish and the promise of catching a 10 lb’er that makes it all worthwhile. This has to be the most challenging and rewarding place on the planet to fish for trout (I’m yet to be truly rewarded mind you). Hopefully the above will help anyone intending to come out here for the first time by getting their expectations in the right place. I'm happy to accept that my expectations were largely unrealistic. Get fit and be prepared to walk! Improve the accuracy of your casting and work on spotting fish. You will in all likelihood cast to fewer than five fish a day (especially if you are fishing with a partner) so make your casts count!
On Monday Takahiro and I fished Larry’s Creek, one of the more well known rivers here and easy to access from a gravel road and walking track. We spotted several large fish (about eight in all) but all were ultra spooky and we had no success. Two anglers who came up behind us suggested that 6x tippet was the way to go on these heavily pressured trout. They may have been right, but using 3 lb breaking strain tippet on 8 lb trout seemed about as effective as using cooked spaghetti.


Yesterday we fished the Haupiri. As I mentioned earlier, we only spotted four fish (in about 7 km of river - with the walk in and out we covered 21 km). Takahiro had his chance on the largest, a fish of about 7 or 8 lbs, which came up and took his yellow Humpy. He struck too soon and pulled the fly out of the fish’s mouth. That was his only chance all day.
It was my turn to cast to a fish we spotted in a deep pool. I tied on a heavy nymph 8 feet under my dry and after several casts through the swirling eddy the dry fly dipped and I lifted into one very surprised brown trout. This was someway up a tributary called Cone Creek, a series of tumbling rapids between pools, and the fish used the rapids to its full advantage by heading downstream. I’m not sure I would have been able to net that fish without Takahiro's help, because he clambered down the rocks to net it in a pool some way down the cascade. It weighed 5lbs. That made it two fish in five days of fishing - you really learn to savour them! 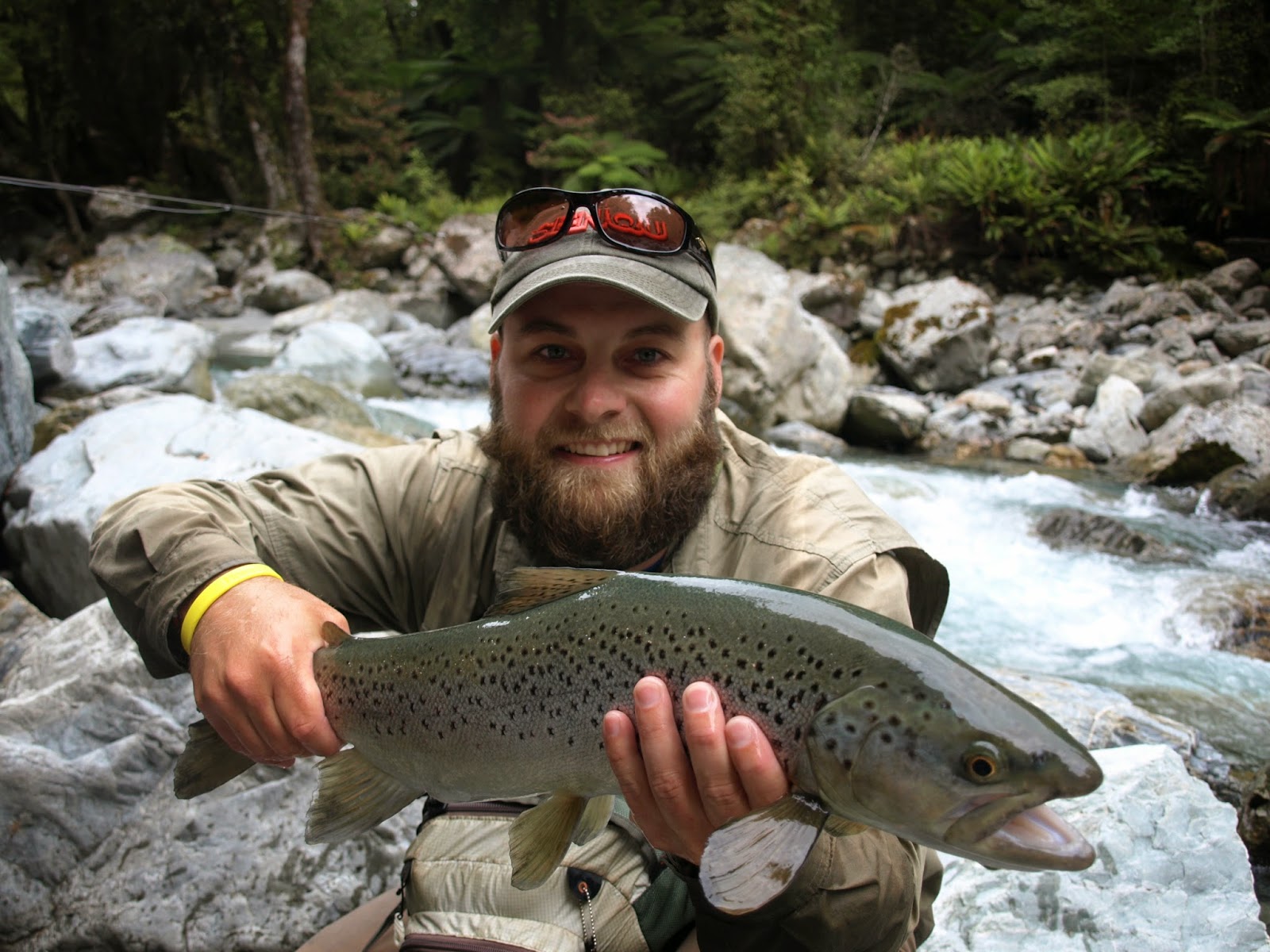 Today is a rest/provisioning day and tomorrow we will hike out to fish a really remote river. The only way to get to it is to walk (it’s in a declared wilderness area so helicopters are not allowed in). We’ll take our tents along and spend 3 nights out there and hopefully get a chance or two at large fish a little less accustomed to humans. The weather forecast looks good and I’m excited! Until next time.
Labels: New Zealand