Visiting Yellowstone National Park was a lifelong dream come true. The world's first national park is gorgeous. I caught it at a time when the meadows and hills were awash in spring flowers and newborn cubs, fawns and calves were shadows to their mothers - my favourite time of year. 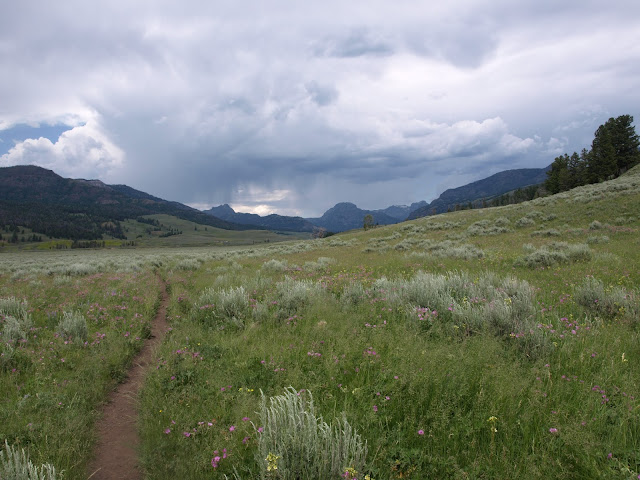 I did the full on touristy thing, stopping along the way to see Old Faithful geyser, the Fishing Bridge and the breathtaking Yellowstone canyon where spray from the thunderous falls formed permanent rivulets on the steep canyon walls. Each part of the park was distinct from the other, the landscape changing subtly from snow covered mountains and cliffs to forested hills, river canyon, open grasslands where vast herds of bison grazed and semi-arid desert.

I kept my eyes peeled for wildlife and saw black bears, bison, elk sporting impressive antlers, pronghorns and deer with spotted fawns. I saw an osprey plunge into a river and emerge with a fish in its talons. I was even lucky enough to see a wolverine on a hiking track. It stood guard over two dead ground squirrels and looked at me ferociously, flattening itself with its hair standing on end, before deciding I was bigger and uglier and it ran off into the grass leaving its meal behind. My only regret was not seeing a Grizzly. I hadn't quite worked out if I actually wanted to have an encounter with one when out hiking. As per the park's recommendations I made plenty of noise when I was alone on a trail - whistling, singing and talking to myself. As I was leaving I met a hiker who said he'd had many Grizzly encounters over the years and with a wink and gleam in his eye he said:

"We all pay the same price when our time comes. It's about the experience before we go right? You can make plenty of noise and see nothing or make no noise and be prepared to use your bear spray. Just watch out for the sows with two or three cubs in their second year because then you will need three or four bursts of bear spray, so use it sparingly."

I nodded along as though a kindred spirit/daredevil. Silently, I promised to keep up my whistling/singing routine when out on the trail. I think he answered my question about whether I wanted to get up close and personal with Yogi. 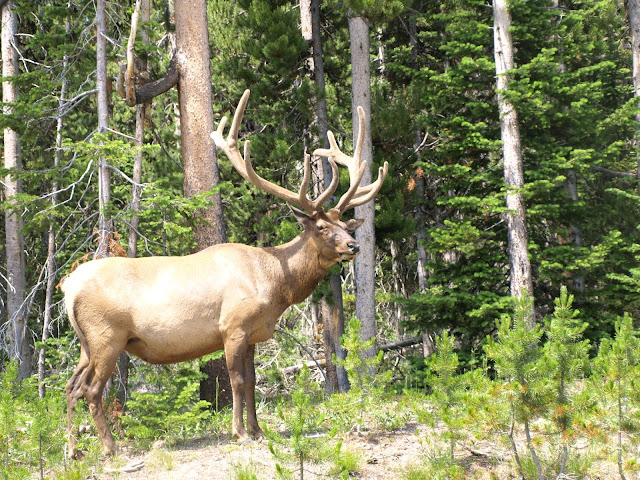 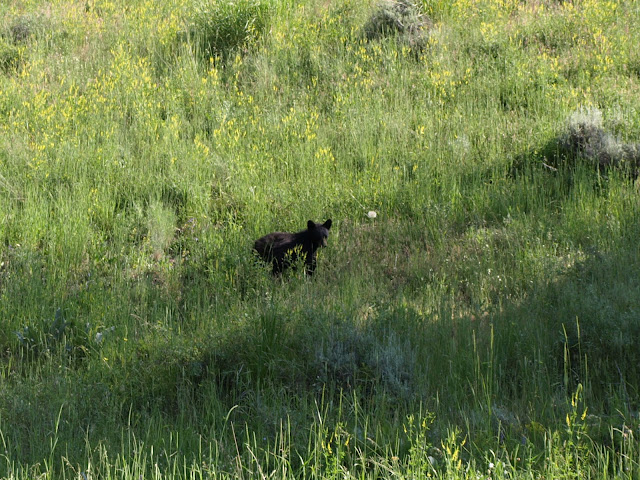 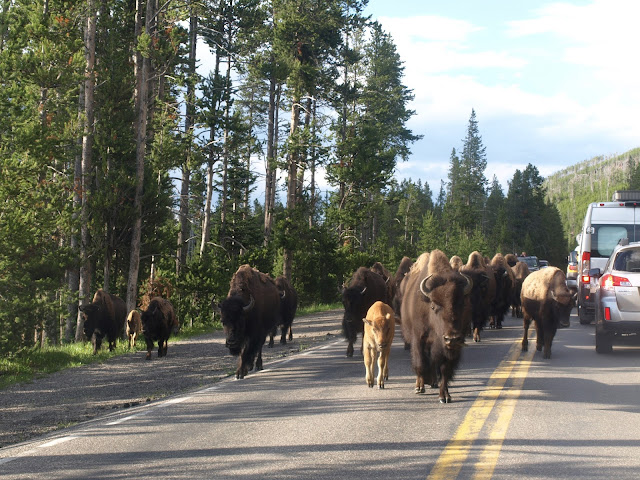 I was staggered by the amount of traffic and people in the park. The roads were busy, at times many tens of cars moving along in convoy. Securing a camp site proved to be a lottery. You cannot make advance reservations and sites go on a first come, first serve basis. Some of the camp grounds had 'full' signs up by 8am. I was told some of the most popular are full by 6am. My plan was originally to drive and fish and explore and only find a spot at the nearest camp site at the end of each day, but this nomadic approach couldn't work. I realised this when I casually arrived at the park just after 4pm on the first day and the lady in the entrance booth asked me where I intended to sleep. 'In one of your camp grounds' I replied. 'Well, they're all full, you need to get here much earlier' was her reply. Twice I had to leave the park and find alternative accommodation because I couldn't secure a camp site in time. So I ended up staying a couple of nights at two sites when I got my foot in the door, and used them as a base from which to see the park and explore the local rivers.

The best way to explore the park is by foot. I saw surprisingly few other people on the trails and the number of fishermen dwindled the further I walked. If you don't hike or fish in the park, you'd have to get used to sitting in traffic and I don't see the fun in that at all.

I arrived at the park early the next morning and after passing a few camp grounds with 'full' signs on display I eventually found a nice, private little spot at Indian Creek. This camp ground is at the confluence of three rivers so I snapped it up and after setting up my tent I walked to the largest of the three, the Gardner River, skirting two large bison bulls along the way. I was very quickly netting a little brook trout, and the fun didn't cease for the rest of the day. I usually get a little bored after about twenty fish but this was Yellowstone and I had an itch to keep going and see what was around each new bend of the river. I caught something like sixty brook trout by the time I decided to turn around and head back to camp. A pink 'Chubby Chernobyl' accounted for at least 50 of them. 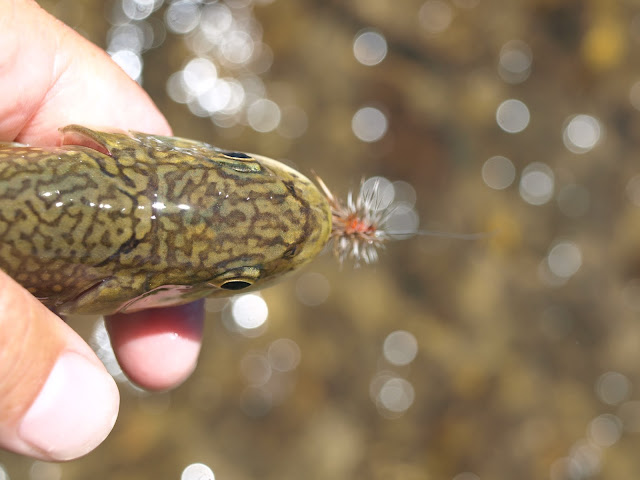 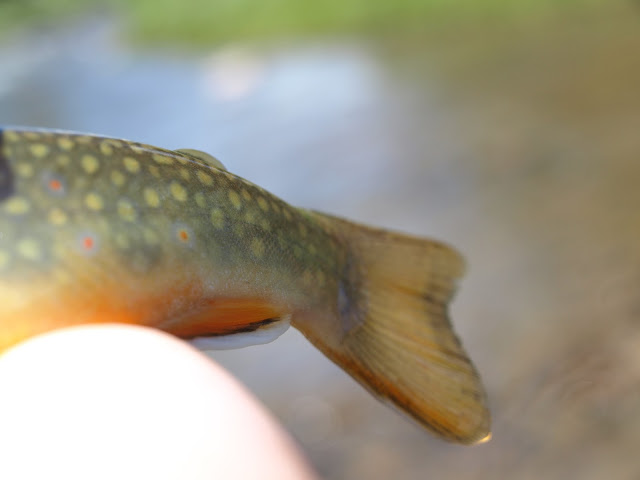 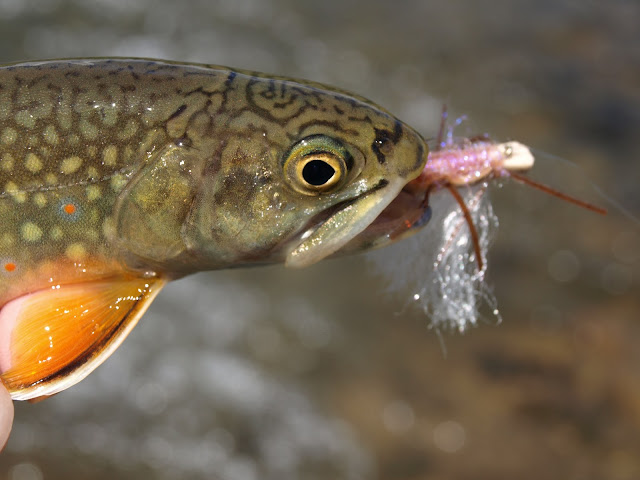 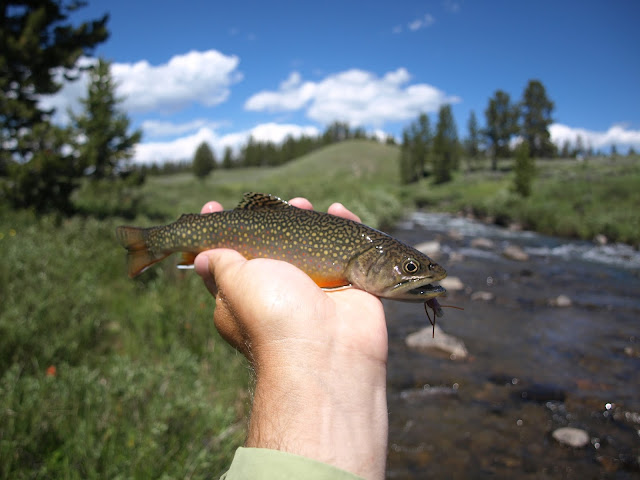 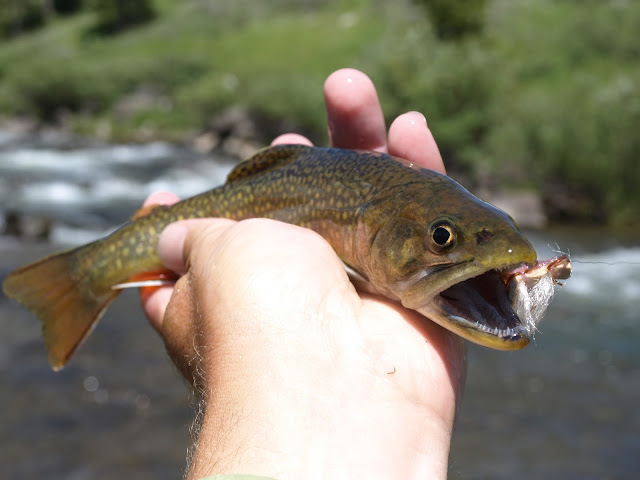 The next day I fished the Gibbon River. At first I fished above the falls where the river follows a serpentine course through lush green meadows and I caught more brook trout and a handful of rainbows. I moved below the falls and started to catch brown trout. Some measured 12 inches and then from a small, swirling pool between two tree logs I hooked a monster brown of about 18 inches which simply ran off under the downstream log and broke me off. I made a schoolboy error when I forgot to pack mosquito spray. As soon as I hit the trees mosquitoes attacked in a swarm and I had to beat a hasty retreat. If I slowed down, say to cross a fallen tree or sip some water, they would nail me. I drove some way downstream, doused myself liberally with mosquito spray, and when I stepped into the river was surprised to feel the temperature hot to the skin. A few metres away hot water bubbled out of the ground, a reminder that I was standing within the caldera of one of the biggest volcanoes on the planet. I stayed for a while and gave my tired feet a good soaking in the hot water. 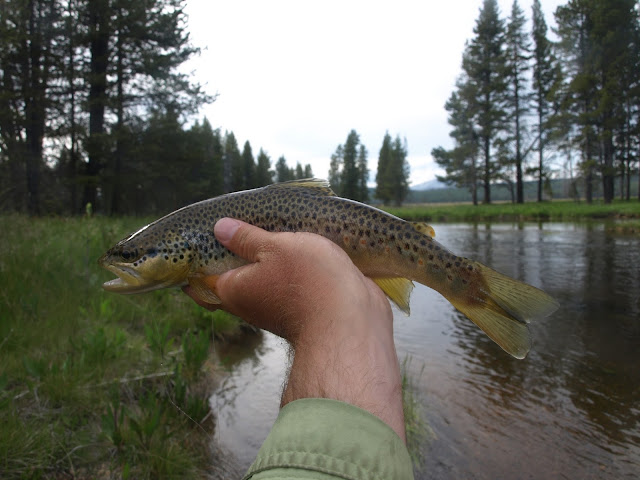 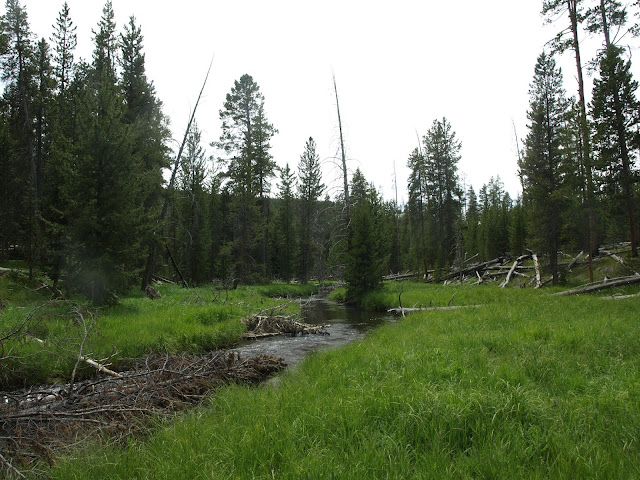 I moved on to the north west section of the park the following day, but not before I missed a turn which took me an hour out of my way and over a mountain pass before I noticed. Not surprisingly when I got to the intended section of the park by midday the local camp grounds were full so I was faced with two choices: either drive back into the park and hope to find another camp site, which was unlikely, or drive the shorter distance to the nearest exit where several other National Forest camp grounds are located. A leaflet given to me when I entered the park listed these camp grounds and confirmed that all of them accommodated tents. I stopped at the first three outside the park but was frustrated to see prominent 'no tents' signs on display at all of them. I had to check in to a motel and it was only then that I heard the grisly reason for tents being disallowed at the local sites - in 2010 a lone, sleeping camper was dragged 25 feet out of his tent and killed by a Grizzly bear. I was suddenly very happy to pay the extra sum for a night in a motel and forego a night in my tent!

That evening I drove back into the park and fished a section of the Soda Butte River and caught my first Yellowstone cutthroat trout (and my first trout on a streamer!). These were beautiful fish with especially bold colours on their jaws and gill plates. 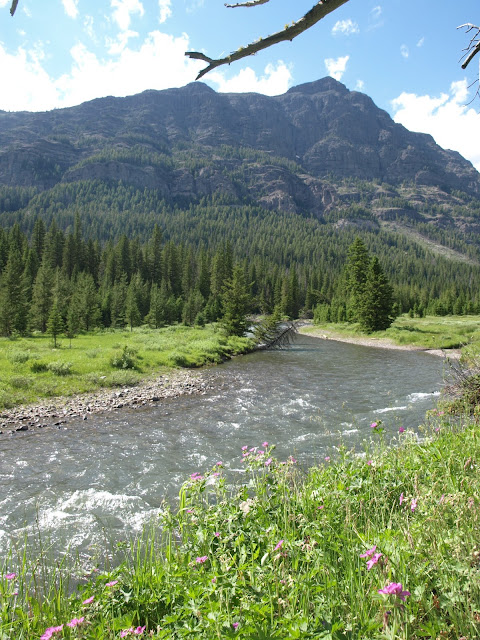 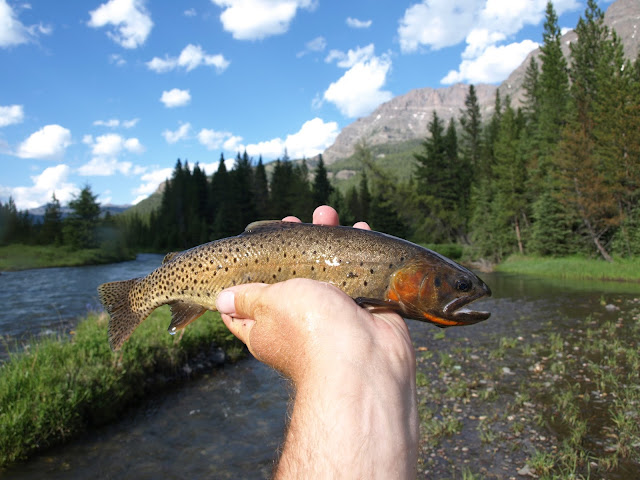 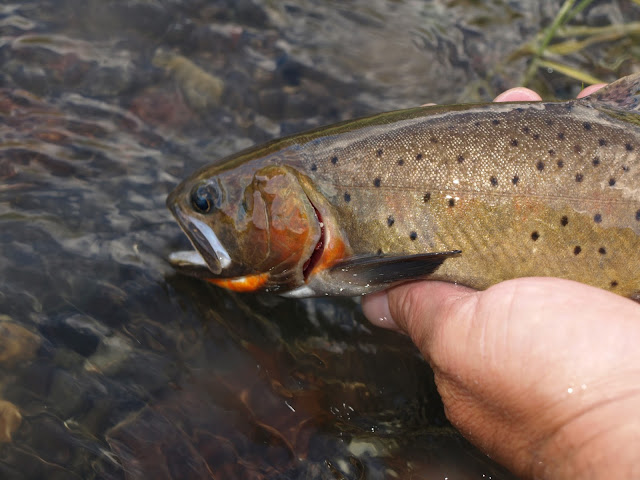 This was just the start of my flirtation with the Yellowstone cutthroat species as the north west region of the park is their stronghold. It felt more appropriate and rewarding to catch native trout within the park rather than the introduced lot. I caught several more from famous Slough Creek (which Americans somehow contrive to pronounce 'Slew Creek') on a day when the fish were in a mood to take the fly. Half were caught on a dry and the other half on an olive woolly bugger stripped through the deeper pools (it hadn't taken me very long at all to grow quite partial to the streamer). I walked five miles in to the river through some stunning meadow scenery and only saw two other hikers all day. That is, until I fished through a bend in the river later in the day and saw two fly fishermen jumping in the water just ahead of me. I reeled in angrily and approached them and shouted across the river to them 'It's a big river isn't it?' It was incorrectly interpreted in a positive way because I received a cheery reply of 'It sure is'. 'So why did you decide to jump in right in front of me?' I shot back. I let my anger get the better of me. Usually I don't seek confrontation when fishing. I fish to relax. But this wasn't the first time it has happened in the US and I guess these two just happened to present themselves as the final straw. One of them was good enough to apologise so they weren't bad people. It was 3pm and I figured I'd had enough for one day anyway and I still had in mind the five to six mile hike back out. As I stormed off, feeling a little better at having vented and shown the two the error in their way, I unceremoniously disappeared down some creature's hole in the ground, unseen in the tall grass, leaving only my rod showing above ground. With some effort I crawled out as they watched from the other bank losing all sense of any shallow victory. I slinked away without looking back. 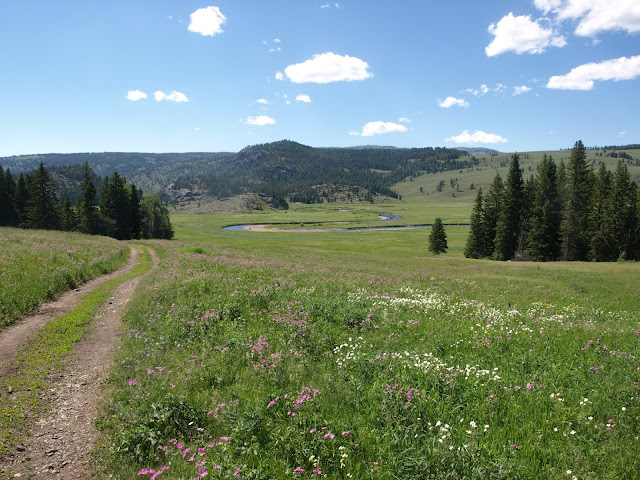 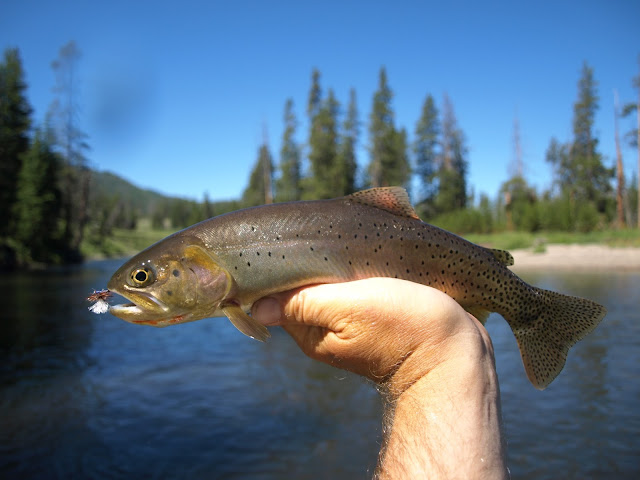 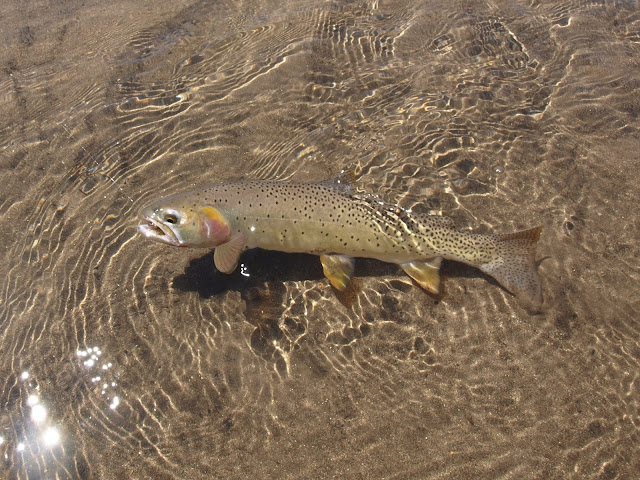 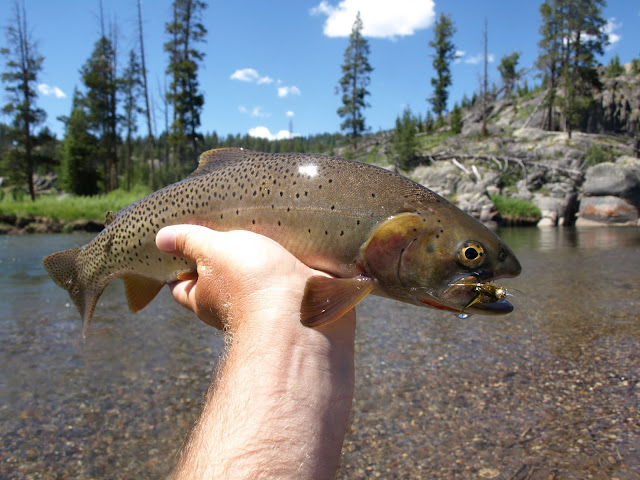 Still, it was a great day, taking in the park on foot, catching willing cutthroat and seeing very few people. I wanted to repeat the experience so the following day I hiked out to Cache Creek, having to depart from the trail to circumvent bison a few times, and fished it down to its confluence with the Lamar which I fished too for a short while. Again it was a day of fine weather and willing cutthroat, only spoiled slightly by the number of biting flies in this valley. Luckily I had packed my buff so my neck, face and ears were covered but my exposed hands got chowed. Bug spray seemed to have no effect on these flies. Their bites could be felt and itched for several days, leaving large pink welts on my hands. 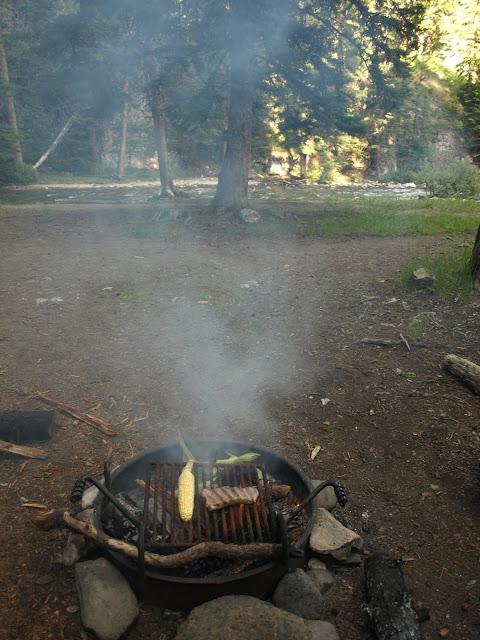 All in all, the park exceeded my expectations. It was an amazing experience and I can see why many of the people I met in the park have returned several times. I'd love to return again some day and make it my mission to see a Grizzly and the park's wolves. The fishing experience was made even better for being in a truly wild place with the threat of danger and even death constantly lurking at the back of the mind. Unforgettable!
Labels: USA