I'm going to go out on a limb and declare the world's most famous trout river to be the Henry's Fork of the Snake River in Idaho. There can't be many fly fishermen who have not heard of it. There are other contenders of course and in the end it's a bit like trying to decide which of Manchester United and Real Madrid is the more recognisable football team. Henry's Fork is steeped in lore and the Railroad Ranch section, or just "the Ranch" as it's known to locals, is its most famous and challenging. References to this section of water abound in angling literature. Here the fish grow big and they do it by outwitting anglers through their ultra selectivity and talent for spotting drag. My guide book describes the experience as "graduate school fishing for Ph.D. trout" and I couldn't pass by and not accept that challenge. 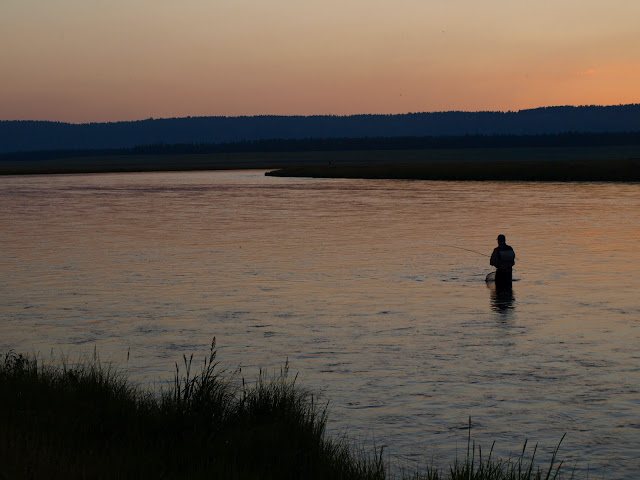 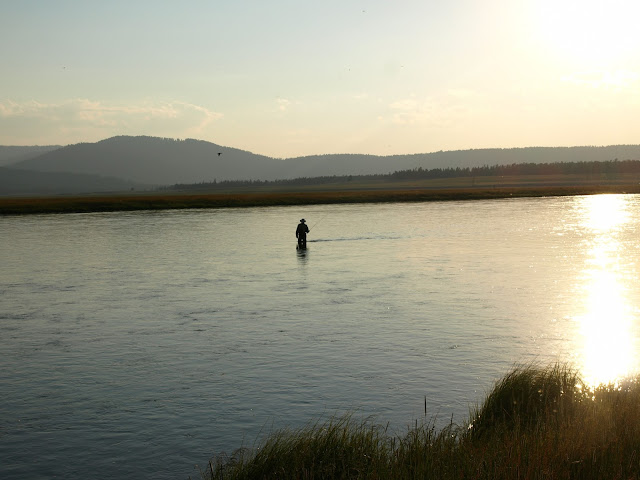 I fished the Ranch for a day and an evening and boy, I can confirm it is tough! The weather was hot and the skies were bright and those are probably the toughest conditions to fish in. As a result, the best fishing, when things started to happen, was in the cool evenings as dusk settled in. Trout rose as the skies darkened but even then were difficult to tempt. During the heat of the day I saw no rises and when my team of nymphs drew no interest I sat on the treeless banks and waited for the evening, snoozing through the hottest part of the day when the river banks were eerily quiet and devoid of anglers. 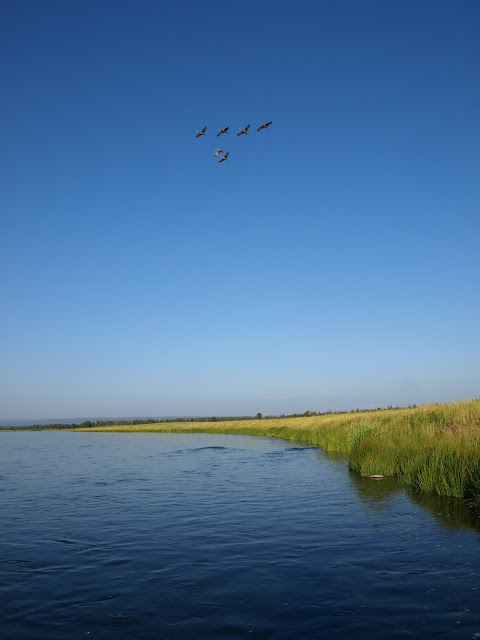 I got skunked on that first evening. I had about four small fish snatch at my dry fly but none were hooked. I saw two large trout in the eighteen to twenty inch range feeding on the surface but both melted away and disappeared after my fly drifted over them the third time. Both banks were lined with fishermen and women and I didn't notice much action from them either. "It's a good place to be taught a fishing lesson" said one. "I'm off somewhere else where I can actually catch a fish" said another.

It's a huge river through the Ranch section, where it contours through a vast meadow, but in most places the river is shallow enough to wade across. The meadow setting, with hills to the west, makes it an attractive place and wild flowers along the banks add to its charm. Gulls appeared en masse in the early afternoon to snatch mayflies from the air. It was still too early for the trout to show an interest but it was a sign of things to come. 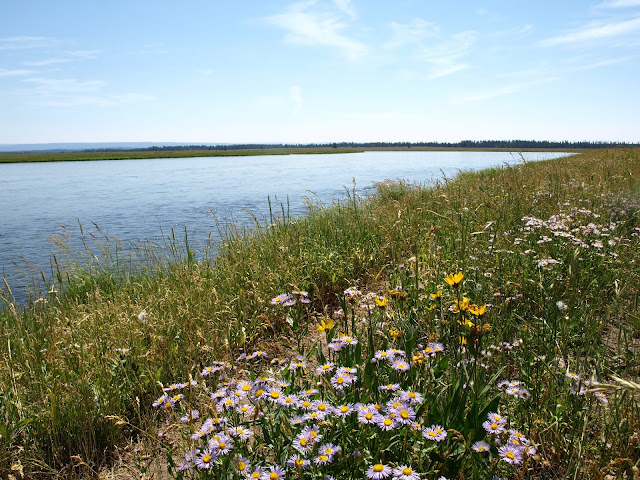 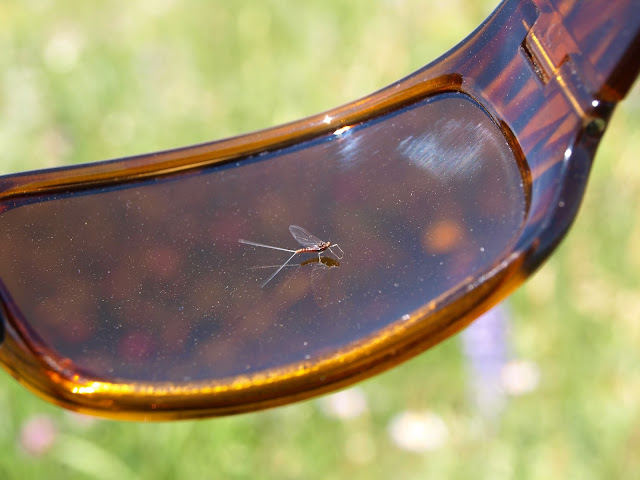 After that first evening I promised to hit the river early the next morning but I slept in and enjoyed a few cups of coffee at my camp site in the trees while I finished a gripping novel. I arrived at the river just before 11am, when there were still a good few fishermen about, but most were finishing up and making their way back to their cars. I felt a little guilty about my lazy morning but I soon began to feel better about it when the general consensus from the fishermen I passed was one of frustration. "There's just no bugs" said one. "I've been here since 7am and had one take which I missed, that's it." I started to feel quite glad about those extra few hours of sleep and then reaching the climax of my novel.

I hadn't seen a single rise since I had arrived so I tied on two small nymphs and fished them unsuccessfully for a while. One of the river's old boys passed me and we got speaking. He told me he fishes this section of the river every day and I told him how lucky was he was to do so. "It has been tough" he said, "there just ain't any bugs for them to rise to, but don't worry they're there feeding sub surface." I agreed and said "yes that's why I've tied on two nymphs" which I showed to him, hoping with all his experience he'd tell me if I had the appropriate patterns on my line. He looked at me in horror and disgustedly exclaimed "Nymphs! This is dry fly only to rising fish here!" He turned his back on me dismissively, the conversation over while I tried to ask him when last he'd seen a fish rise and I heard him mutter as he walked away "we don't fish nymphs here." Had I just encountered Frederic Halford's ghost? Of course there is no such regulation - it's fly fishing only but you can use any fly you want - and the way I see it, it's a bit like religion. You're free to follow any religion you want but don't preach it to me or get angry if I don't follow suit.

It's a good thing the old boy wasn't around to see me fish a streamer later that day. Dries and nymphs had not worked so I figured why not. I cast out a black and purple sculpin and on it's first retrieve, strip, strip, strip, it was smashed by a very large fish. I saw its tail leave the water and smash down on the surface causing a large splash of broken water. My heart raced. This was one of the Ranch's big fish. And then... nothing... my fly had broken off and I exhaled a great breath of air which I had unknowingly been holding in. That was my one chance and it was missed.  A little part of me, admittedly only a tiny speck, was grateful that I wouldn't have to explain to the old boys that I had caught one of their prized denizens with a lowly streamer! 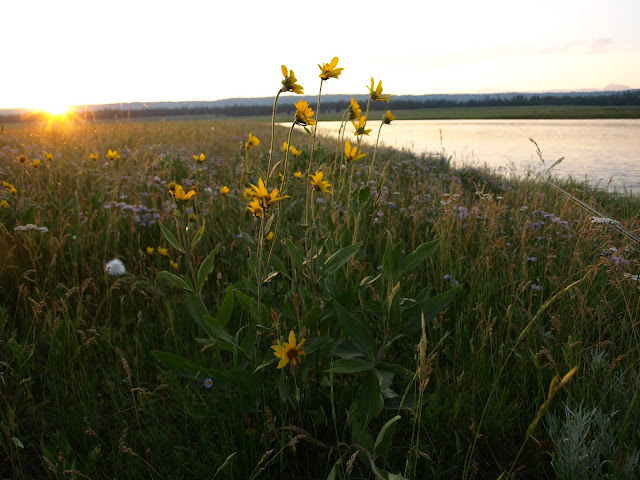 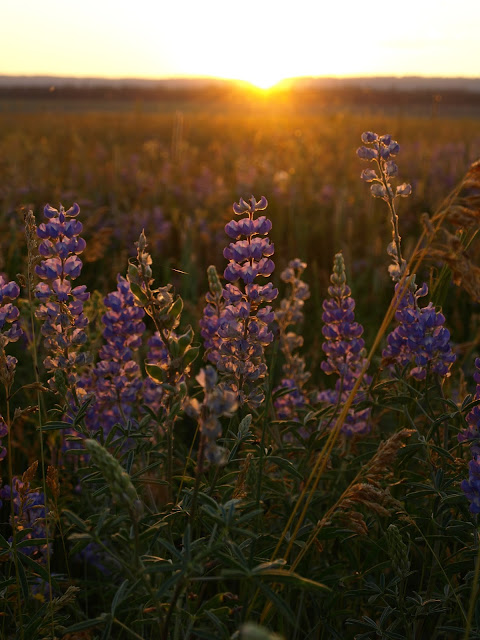 I waited out the heat of the day, fearful that I would leave the Henry's Fork without a fish to show for my time on this famed water but as the evening wore on, I finally hooked one of the little guys which had for the past hour been snapping fruitlessly at my dry fly. As it came into the safety of my net I breathed out a sigh of relief - I'd finally caught a trout from the Railroad Ranch and I didn't care what size it was! And the old boys who frequent this river could look on with approval and be satisfied that it had taken a dry fly. 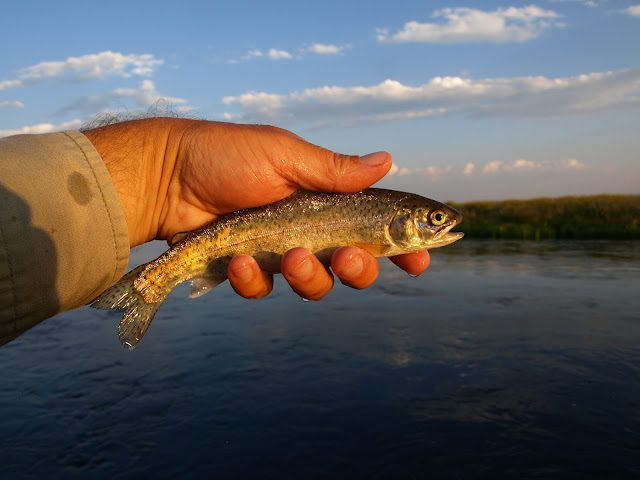