If I could create the perfect day of fly fishing it would go a little like the day I describe here. I was following up on the last of Norm's tips, still roaming in Wyoming. My destination was the head of a long valley where the mountains finally came together and brought an abrupt end to the gravel road I was driving on. I doubt I would have come by the place if it wasn't for Norm. I parked my car at the end of the road and followed a trail for about a mile, skirting a fence and private ranch. The fence ended along with all other sign of humans and National Forest - with open fishing access - extended for mile upon mile up the remote valley. The day, a Sunday, was hot but a gentle breeze added some relief from the heat. Being a weekend day I expected to see more fishermen but I encountered only one. I guess the lack of road side access and the short hike in puts off the lazy legion. I contrasted this pleasing isolation with the North fork of the same river in the next valley over. That fork has a road running all the way along it and cars were parked in most of the pull out areas and fishermen crowded the water. 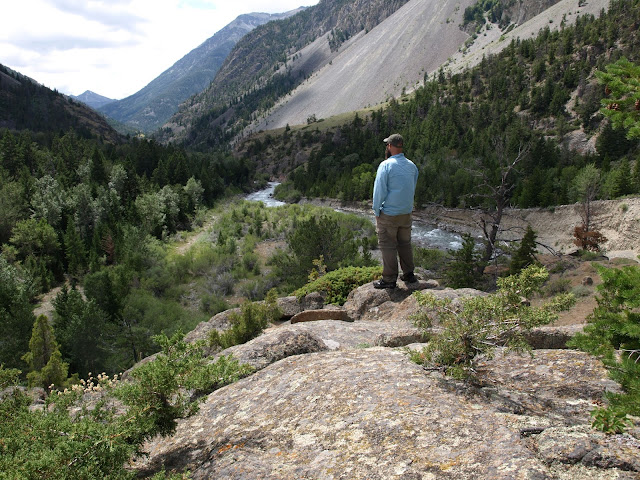 I pause from describing my near perfect day of fly fishing - in keeping with my American fishing experiences the only other angler arrived after me and jumped into the water about 100 metres upstream. I reeled in when I was finished with my pool, having caught three brown trout and two whitefish from it on a stonefly nymph, and stepped out of the river to overtake the rude chap. I was there first and had right of way, and I sure as hell was not going to take his sloppy seconds all day. As I approached him he left the water and briskly started to walk upriver, leaving untouched some pretty good looking pools while stealing furtive glances at me over his shoulder. It became apparent he was trying to stay ahead of me! I resolved not to lose this war of will and we both trudged on for some distance, eventually seizing the advantage when I cut across a wide bend after he made the mistake of following it. I left him trailing in my dust and was tempted to yell out 'sucker!' or something to that effect but thought better of it. I did the polite thing - I kept on walking and left him a lot of water to fish, but I also did it to reduce the chance of him catching up to me. I never saw him, or any other person, for the rest of the day.


I'd set up my tent at a nearby camp ground the night before. Grizzlies were meant to be in the area but I had a peaceful enough sleep with my bear spray within reach. I didn't pause to think how I'd get at the spray from deep within the folds of my snug sleeping bag if a bear were to attack my tent. It takes quite an effort to unzip my sleeping bag when the hood's drawstring has been pulled tight to leave the cold out and only a slit to breathe. When I was some way up the valley I heard an unseen animal move in a thicket. I made noise and moved on swiftly. Some hours later as I was making my way back down the valley I again heard a rustling sound from the same thicket. This time I noticed two detached deer legs with the fur and meat still on them very nearby. Odd. Grizzlies are meant to be very unpredictable around animal carcasses and I quickened my pace without stopping to investigate why there were loose animal parts about. Later that night after I had settled in to my tent to sleep I heard an animal cracking twigs beneath its feet while it moved nearby. My torch beam hardly penetrated into the then eerily quiet woods. I took no chances and slept in the car, even though it was probably just an elk. 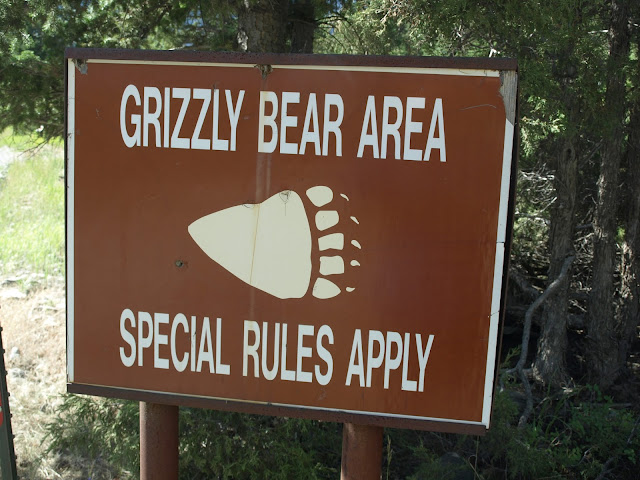 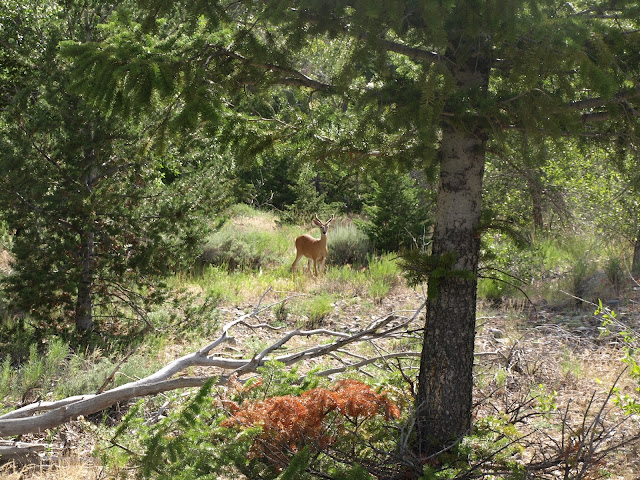 Back to the fishing, trout were eager to take a nymph and for much of the morning I caught brown trout of a very good average size. Any drop off where the water darkened in colour to an opaque green could be relied upon to cause my indicator to dip below the water, although not every take resulted in a solid hook up. 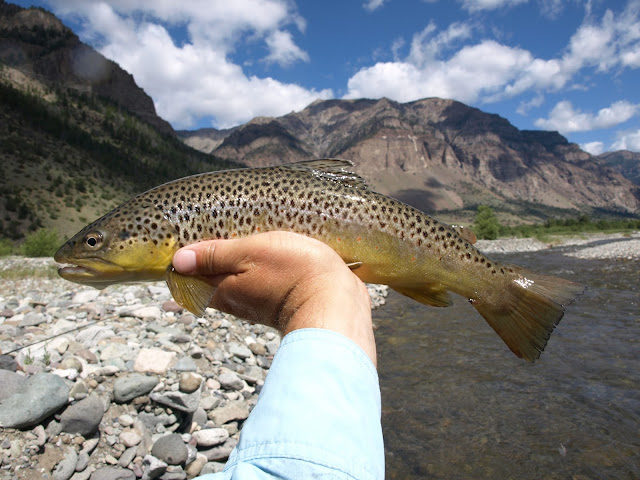 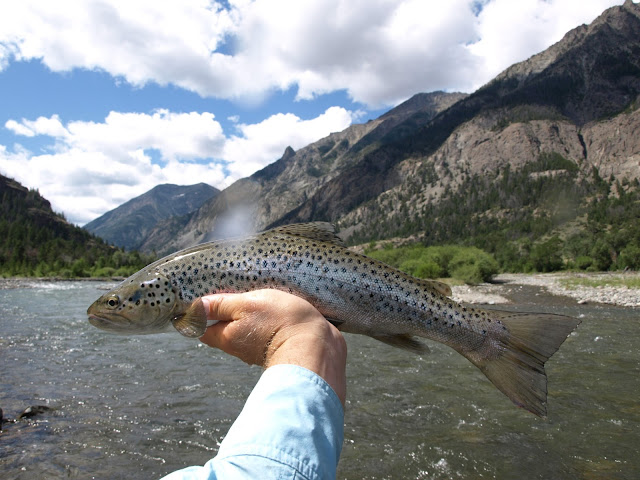 I swear I caught the same cutthroat trout within a matter of about five hours separating events. The fish was caught from the exact same lie each time and was very strikingly coloured in hues of yellow and pumpkin orange. It was the only cutthroat I caught that day, albeit twice, when I was expecting to encounter more [I verified it was the same fish by comparing photos later]. I later learned a huge flood in the valley some years ago decimated the cutthroat population but strangely had much less of an effect on the browns. The cutthroat took a Parachute Adams second time round, when a hatch of grey drakes had the fish looking up. 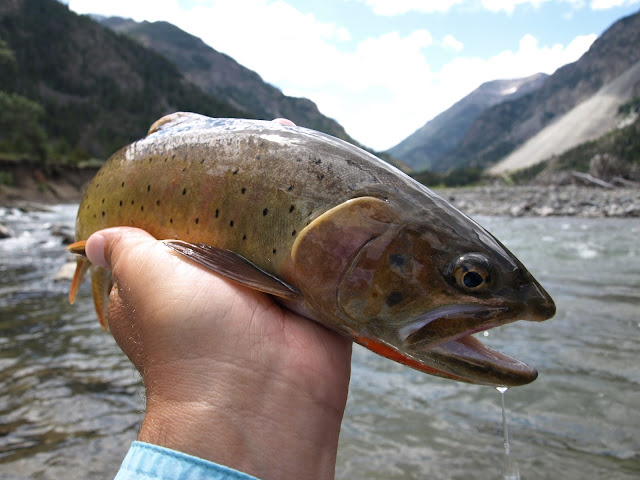 With the dry fly accounting for several fish in the late afternoon this day started to tick almost all the boxes. It was made complete when I caught the final fish on a streamer. The best was saved for last. I vividly recall the spike of adrenalin which surged through my body when the trout hit my streamer with a ferocity I have never witnessed from a trout before. It moved out from a drop off downstream of me with such furious speed that when it hit my fly I actually got a huge fright. It tore away in the fast current and I followed it gingerly down the rocky bank, praying for my tippet to hold. I only truly appreciated its larger than average size when I saw it in the net.


I will savour this day in the knowledge that it will take some beating. The scenery, the solitude, the quality of the fish caught, their willingness to attack a fly and the exhilaration of hooking and netting the last fish, the best of them all, made it a heady mix.

I played around with my camera that evening, making use of the evening light as the sun set over the ranches of the lower valley. 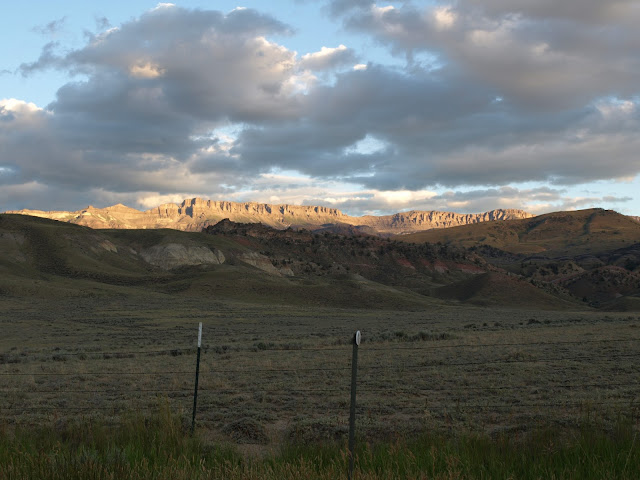 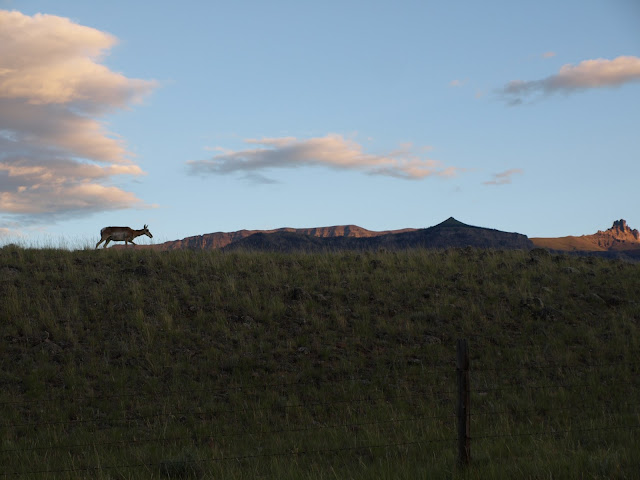 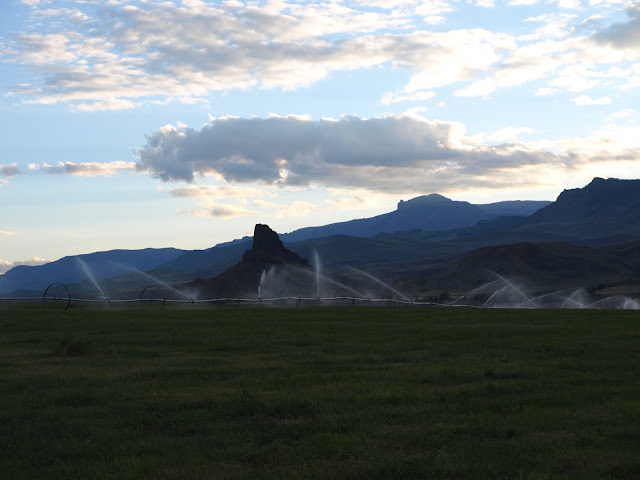 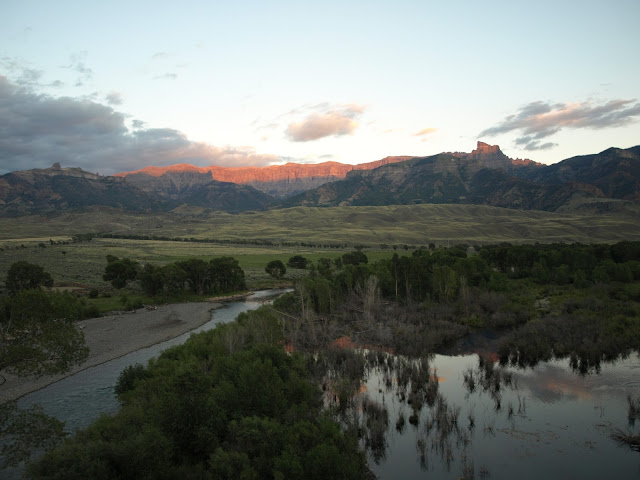 For anyone from South Africa, there's something of the Drakensberg in those mountains, isn't there?
Labels: USA