I spent just over a month travelling around Montana, fishing its big, famous rivers. Rivers I had grown up reading about and couldn't miss even though most of them were much larger than any river I had fished before. It took some getting used to, but even then it was fun and rewarding. I've banked enough fishing memories from Montana alone to last a life time. Wyoming arguably doesn't have rivers quite matching up to the worldwide fame of those in its neighbouring state. I guess that could be a good or a bad thing depending on which way you look at it. The place is still a trout Mecca for sure, with trout rivers, fishermen and fly shops a dime a dozen, but that lack of an elite set of blue ribbon waters allowed me to approach Wyoming a little differently. I decided to focus on the smaller creeks and to give my 3 weight rod an airing after it was mostly left in its tube in Montana. At the same time I thought it would be pretty fun to attempt the "Wyoming Cutt Slam" - the aim of which is to catch four of Wyoming's cutthroat subspecies from their native ranges. 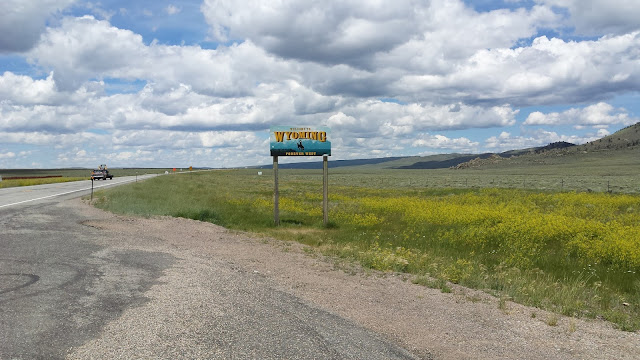 I should also point out that Wyoming's access laws are nothing like the open access residents and visitors to Montana enjoy. Private land means private in Wyoming. To fish the rivers of Wyoming public land needs to be sought out - National Forest areas are a good place to start - and you cannot stray from them onto private land unless you're in a boat and even then you're not permitted to drop anchor or leave the boat.

After a brief trip to Denver, Colorado to swap hire cars I returned to Wyoming in the south east corner of the state with the North Platte River my goal. This is one of Wyoming's world famous trout rivers but one look at it - high and flowing fast - made me decide to fish one of its tributaries instead. I may yet get back to the North Platte a little later this month or next when it should be lower. I camped out on the banks of this tributary and fished it over two days, catching browns and rainbows. This part of Wyoming is semi arid desert, very similar in appearance to the Karoo of home, and it was somewhat different catching trout amongst that dry scenery and prickly cacti. Garter snakes lined the trail next to the river and I wondered if there were rattlesnakes about. It was at the camp site that I met a great character, a man in his sixties from Kansas who used to be known as Norman but now goes by Norm. He shortened his name when he gave up his old life and material things, telling me Norman is far too boring a name. We drank red wine from camping mugs while Norm told me about his life, his lost love, his many nomadic travels and his happiness. Two kindred spirits with the same passion for fly fishing and travel wanderlust. He told me more than once that he threw a snowball at a monkey in Morocco, and I could imagine his transformation from staid research scientist to thrower of snowballs at monkeys. Norm's eyes lit up when he spoke, his earring probably acquired at the same time he lost two letters from his name. Norm is in the process of writing a book about his life and I will look out for it. I fetched out my map of Wyoming and Norm circled the rivers and creeks where I could achieve the Cutt Slam. Without this info I would have been a little lost.

Back to the Cutt Slam. Wyoming used to have six subspecies of cutthroat trout but the greenback subspecies is now extinct in the state. The westslope cutthroat, the same subspecies I had caught in Montana, is found only in a very small part of Yellowstone National Park, in the north west tip of the state, and doesn't count towards the slam. The slam is made up of the Yellowstone cutthroat (which I had already caught within the state in Yellowstone National Park), Bonneville cutthroat, Snake River cutthroat and Colorado River cutthroat. At some stage in the past these fish diverged from a common ancestor, separated by high mountains and different catchments. Divergent evolution my sister was quick to tell me, using her just completed school biology knowledge. With this evidence before my eyes I listened with interest to a radio sermon denouncing evolution on one of Wyoming's long, straight roads. The chap doing the eloquent speaking proclaimed the world was only something like 5,000 years old and that the Grand Canyon was scoured in a single day by some biblical flood. If you can't pick up any decent music radio stations in Wyoming you can be sure to find religious or country music stations. Sometimes you just need some noise in the background on those long open roads and can't be fussy.

To seek out the trout you have to have an idea of their different catchments, some headwaters separated only by a few miles as the crow flies but hundreds of miles by roads around the mountains. Here are the results - the three subspecies I needed were caught in three days.


At first I tried dries and nymphs but only had interest from these chub looking fish. 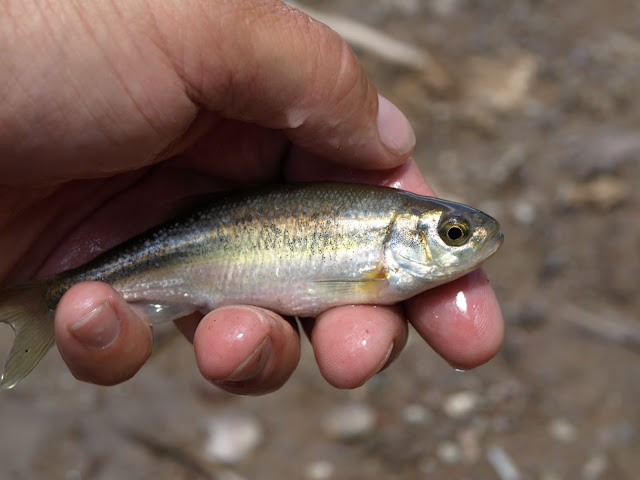 I switched to a streamer and soon had my first Bonneville within a matter of three casts. 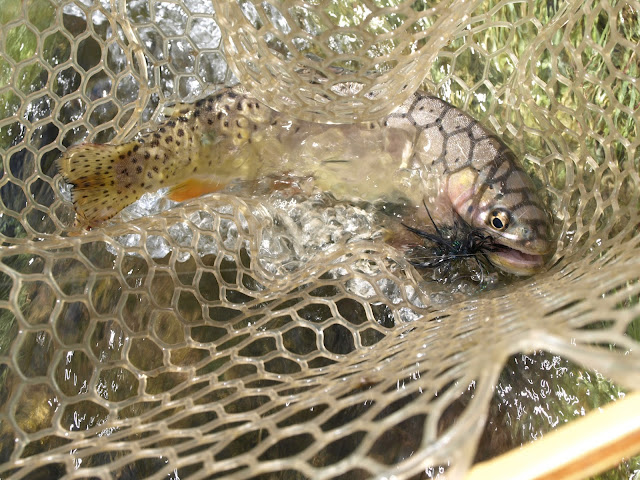 These fish couldn't resist my streamer. I later read on Wikipedia that Bonneville cutthroats primarily eat other fish and it all made sense then. 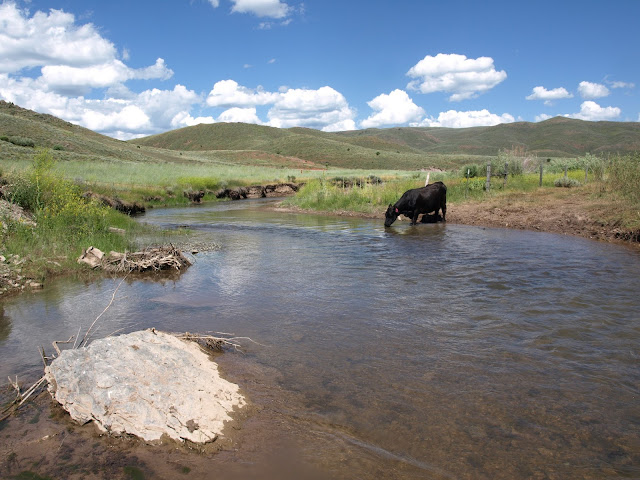 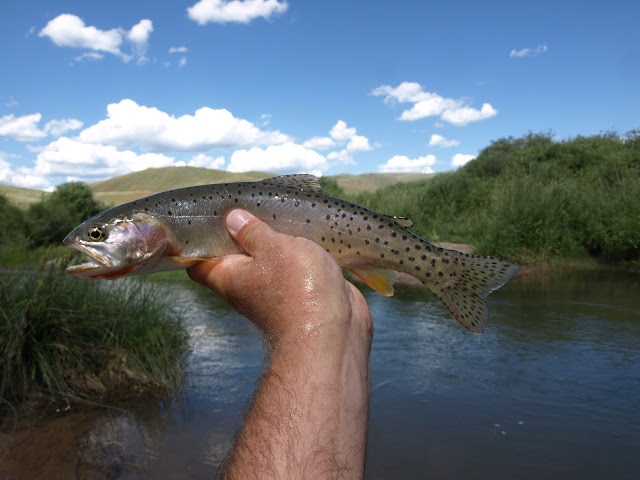 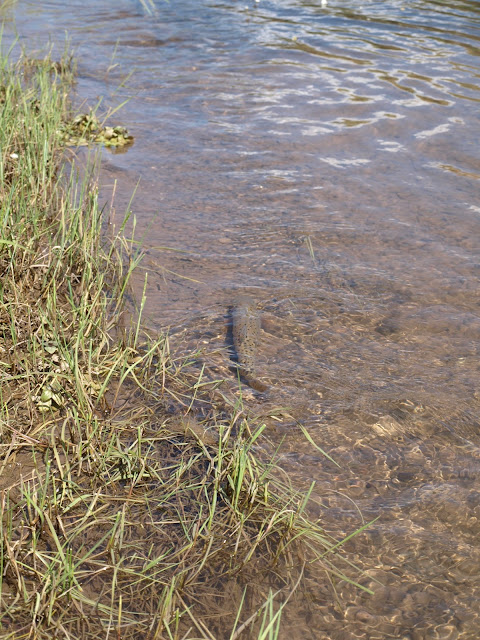 I pushed on north, following the western edge of the state into the Snake River drainage. I took a dirt road into the forest for 11 miles and fished a small canyon section of a beautiful river. At first I struggled through a very 'trouty' looking stretch with only one small cutthroat to show for it, but an osprey's nest perched on a dead pine tree leaning precariously over the river probably explained that. 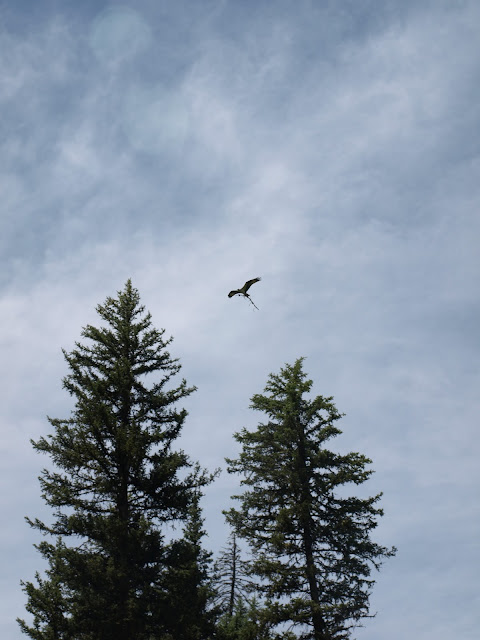 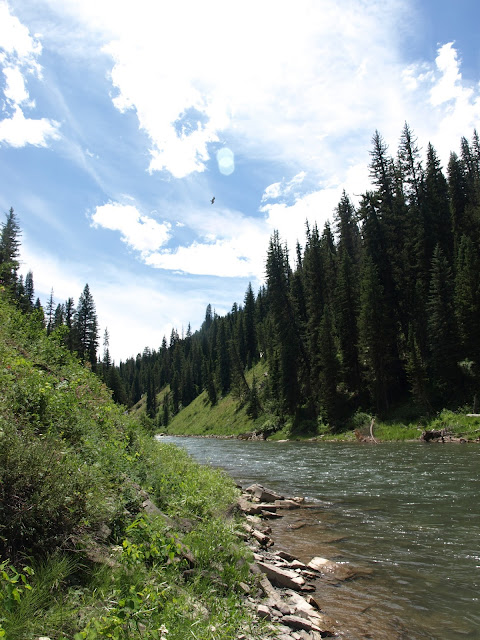 Again, it was the same streamer that accounted for all the fish that day. Streamers have allowed me to fish water I would normally have passed up. I caught the best fish of the day from a deep depression formed by rapids. 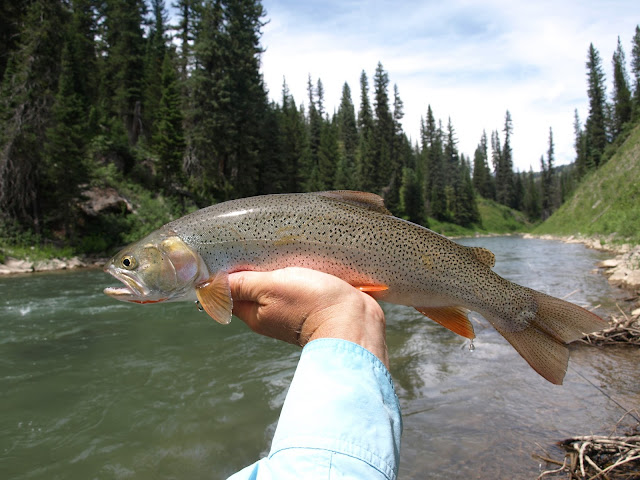 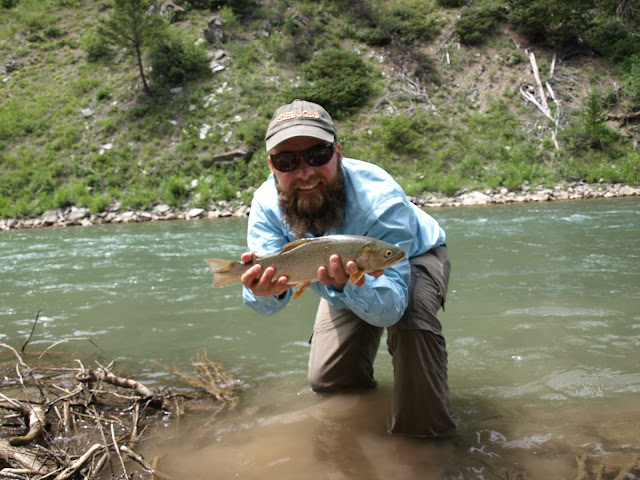 This subspecies is characterised by fine spotting, and some people refer to them as 'fine-spotted' cutthroat.

I crossed another mountain divide into the centre of the state and the Colorado River system. I initially planned to fish a little creek only for a day but I found the going tough and only caught one cutthroat (and three brook trout).


With that solitary cutthroat I had achieved the slam but I couldn't help feeling I hadn't seen the best of this creek so I set up my tent on its banks and stayed the night. It hadn't helped that I'd hooked and lost what appeared to be a brute of a 20 inch cutthroat which took a streamer stripped past an undercut. I'm glad I stayed and fished the river again the next morning. 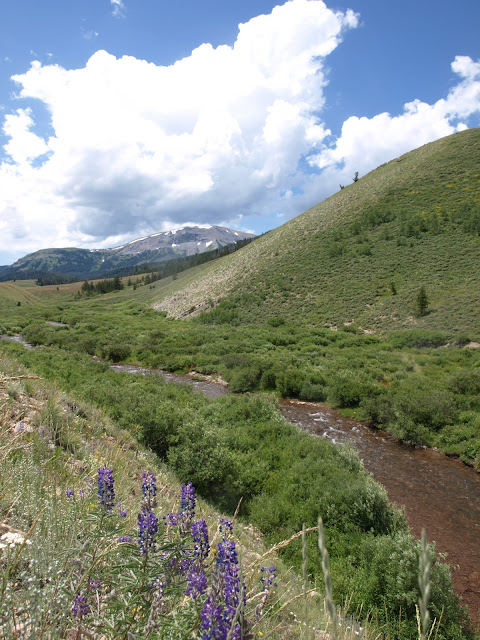 It had rained overnight and again in the cold morning as I lay wrapped in my sleeping bag. When the rain passed I cleared camp and hit the river. I caught a few typical looking Colorado cutthroats but then caught a much larger fish, around 16 to 17 inches, which looked like no other cutthroat I've seen. Curious. 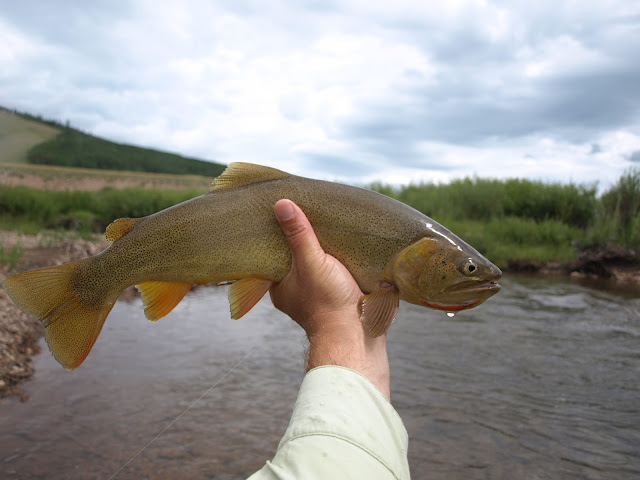 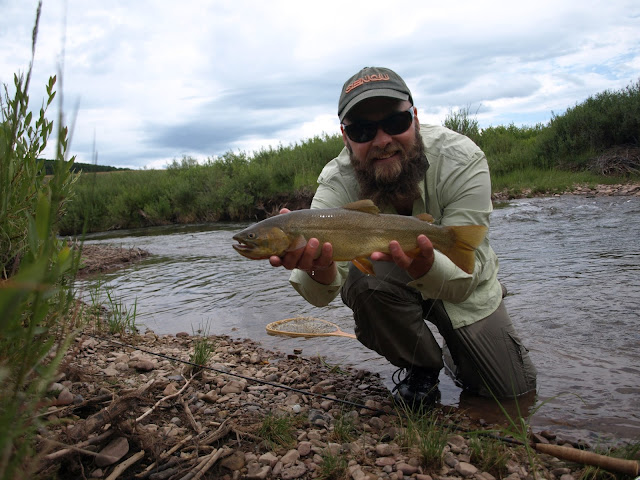 I didn't think I would beat that fish that morning but I did! Rain started to pelt down and at the same time a hatch of small mayflies started to emerge. I missed several fish on a dry fly and just as I felt like calling it quits I decided to fish through one final pool. I flicked out a Parachute Adams, a nothing cast as the strong wind practically put the fly at my feet, but I let it drift past a boulder with some deep water behind it and to my surprise it was sipped in incredibly gently by a large fish. After a few days of fishing with a streamer, it was pleasing that the largest fish of them all took a dry fly - and this single act alone probably saved me from becoming too much of a streamer junkie! I reckon this fish tipped in at 20 inches. I took one quick snap while it was in the net, then set up my self timer for a 'trophy shot'. The result speaks for itself... the fish hit the water and darted away under the nearest undercut. Typical. 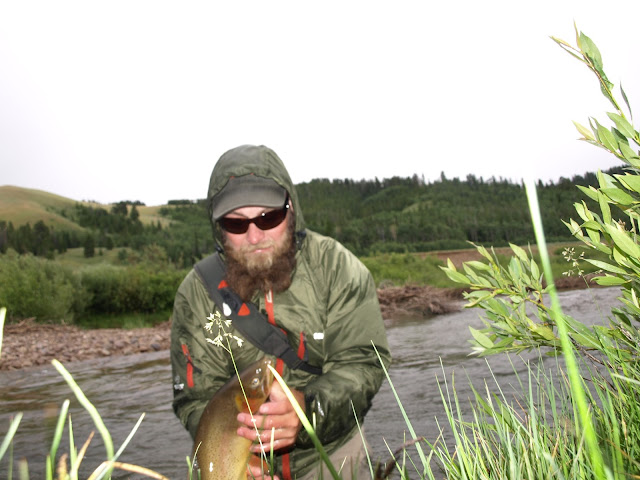 I now qualify for a colour certificate from the Wyoming Game and Fish Department proclaiming my slam achievement but I doubt I will send away for it. I'm happy just knowing I tempted Wyoming's cutthroat trout from their native ranges and learned something about them in the process.

There's still one or two of Norm's recommendations to fish through before I'm done in Wyoming.
Labels: USA