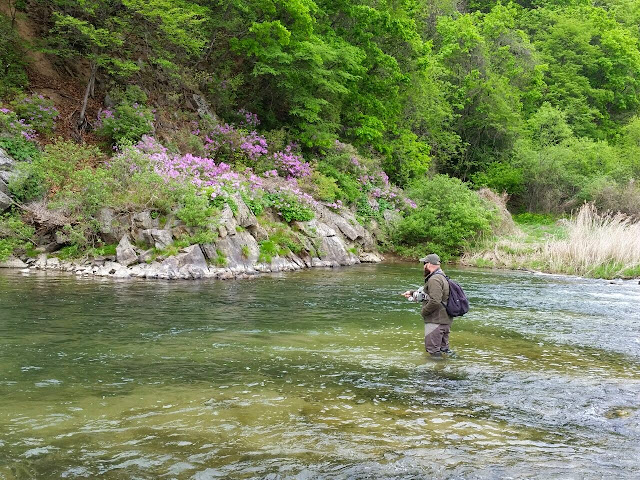 I had read that the land on either side of the demilitarized zone (DMZ) separating North and South Korea is the most heavily militarized strip of real estate in the world, but even then I was unprepared for the sheer scale of it.

I had asked Mr Lee, my fishing guide, if we could drive as close to the DMZ as possible and we got about 15 to 20 km away - as the crow flies - before Mr Lee did a u-turn in the road and said it wouldn't be a good idea to go any further. By this stage we had passed several South Korean army convoys and soldiers posted at the roadside. The soldiers were alert and watched us suspiciously, their hands never far from the triggers of their automatic rifles. Every few hundred metres along the road soldiers were dug in under the shade of camouflaged tarpaulin in machine gun nests, their menacing looking weapons pointed at the road. We passed several roadside anti-tank blocks, which Mr Lee told me were rigged to explode and block the path of tanks in the event of a land invasion.

Artillery was fired at one point, each shot a thunderous clap which punctuated the still air. I looked quizzically at Mr Lee wondering if the North Koreans had invaded and, sensing my alarm, he reassured me it was "just testing". I later saw huge gun muzzles protruding from dug in positions near the road, all pointed north. Jet fighters roared through the skies intermittently, tearing this way and that in a display of aerial strength. For all the travelling I have done, I have never before been in a country actively prepared for a war and it was a curious thing. It was even more curious and a little thrilling to rig up my fly rod and catch trout among all of the military commotion. Mr Lee was totally nonplussed by this every day reality of Korean life near the border.

I came to South Korea to catch cherry salmon, the same beautiful species of fish I had caught in the mountain streams of Japan, but I left with something even better - cherry salmon and lenok, the world's oldest trout species. Lenok, otherwise known as Manchurian trout, are found only in Korea, Mongolia and some remote parts of China and eastern Russia. They have a distinctive overbite, akin to grayling, but are otherwise most like brown trout in appearance. Some of the lenok I caught had deep crimson tails and anal fins and matching crimson bands on their flanks, making them unique from any other trout I have seen. Best of all, I discovered that lenok rise very willingly to dry flies making them a pleasure to catch on the fly.

On the morning of our first day together, having driven 3 hours from Seoul, Mr Lee took me to a river I will refer to as River X. In terms of setting the scene, River X is near the famed "Punchbowl" battlefield of the Korean War and the fourth infiltration tunnel discovered by the South in 1990.

Compared with typical Korean valleys which are narrow and forested, this valley is wide and there is a large town and cultivation on the river's banks. The water was numbingly cold and Mr Lee explained that lenok prefer colder water temperatures to cherry salmon, which do not share the same rivers as lenok. Cherry Salmon are found in river catchments which flow east into the Sea of Japan, over a mountain divide.

Within a matter of minutes a lenok came confidently to my dry fly, followed a few minutes later by a larger lenok of 15.5 inches. This was a good sized Korean lenok - it got Mr Lee excited - where 20 inches is considered a trophy. We moved around River X quite a bit, searching for fish, and the impression I got was that the lenok were shoaling. Where one lenok was found, others were bound to follow. From later experience I could tell that the numbers of lenok were not especially prolific from this river, but I had caught and released seven by lunch time and was very pleased.

The number of lenok was, however, dwarfed by a plague of dark chub! Dark chub, with a Korean name I cannot recall but which sounds something like 'tiger nanny', are a striking looking fish which grow no bigger than about five or six inches. They attacked any dry fly within range with a voracious appetite - Mr Lee would spit "tiger nanny" in disgust each time - and were often too small to do anything but drown the fly. Once the novelty of catching one or two of them had worn off I too came to view these little fish as a curse. 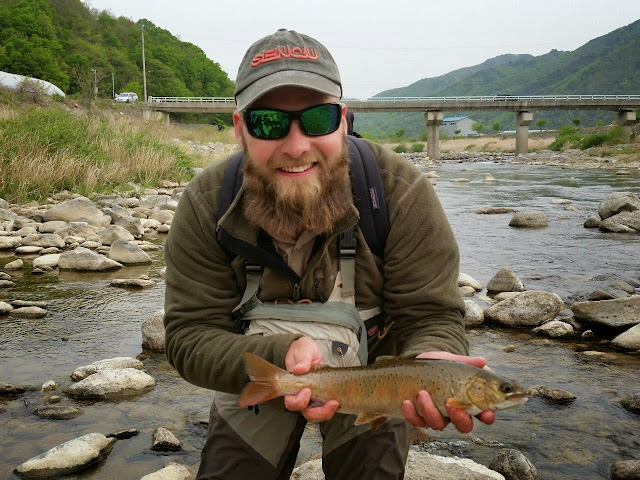 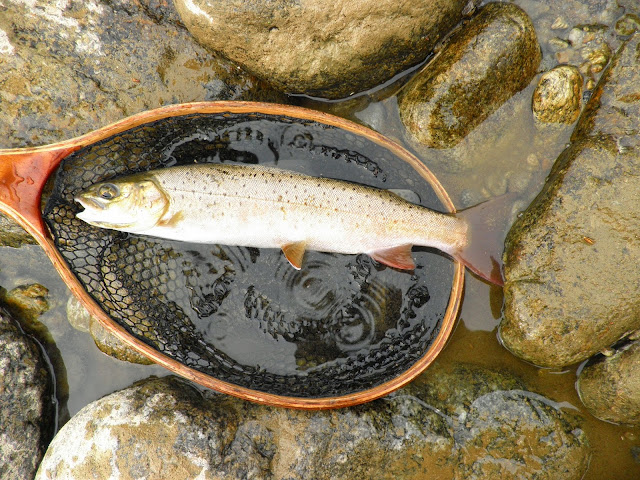 At one point on the banks of River X we set a small alarm bell ringing by stepping through a fine trip wire of fishing line. This led to some surprised looks from three South Korean soldiers in a well camouflaged machine gun nest on the banks of the river, and Mr Lee and I wondered if we had disturbed their sleep. Guns were pointed at the river in case of river-borne invasion from the north.

When we broke for lunch Mr Lee took me to a restaurant in a nearby town where we enjoyed a traditional meal of grilled mackerel and sides.

That afternoon we crossed over the mountains by following a dramatic mountain pass to pursue cherry salmon. It was much warmer on the other side of the mountains, and more humid, and in the heat midges seemed to thrive and buzzed about our faces. There was also no military presence to be seen.

Mr Lee took me to River Y, a small clear mountain creek and it wasn't long before I caught my first Korean cherry salmon. We had spotted a school of cherry salmon resting on the bottom of a deep pool and my fish came up from the depths with some gusto to attack a dry fly. The heat eventually got to us and we took an early break for dinner, visiting a local restaurant on the banks of the river where we ate bibimbap, a signature Korean dish of rice, mixed vegetables, chili paste and a raw egg which is all mixed together on a hot plate while the egg cooks itself. After dinner we drove upstream and in the coolness of the evening when the sky had turned pink I caught several more cherry salmon on a dry fly. Cherry salmon, with their markings similar to the parr marks found on juvenile brown and rainbow trout, are beautiful fish, perhaps the prettiest of any trout I have caught. 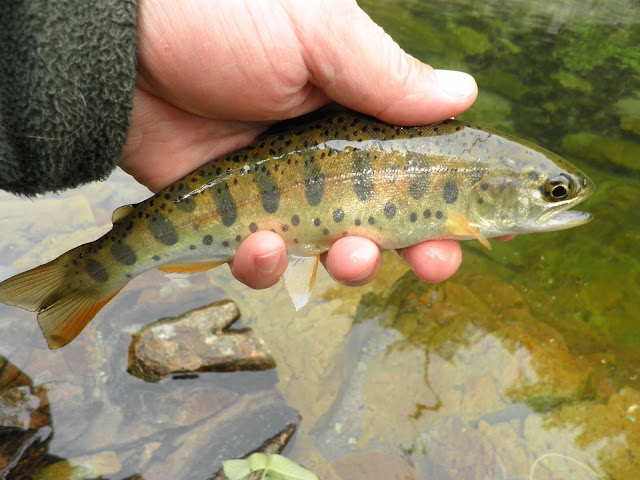 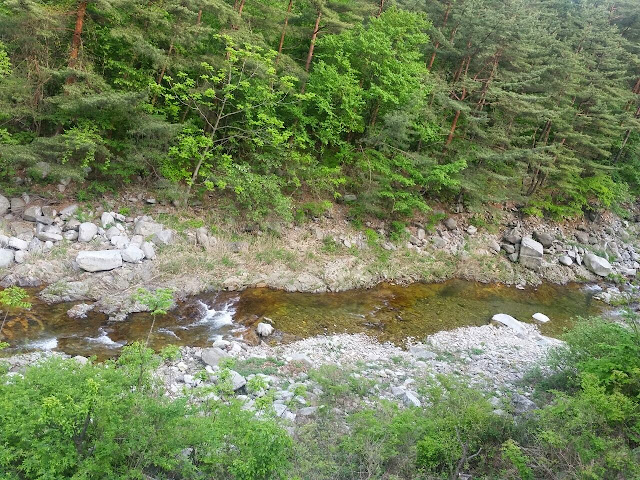 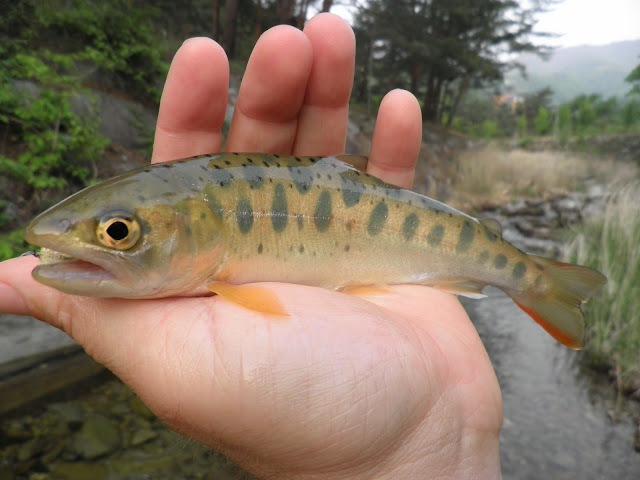 As night fell we crossed back over the mountains to the lenok side of the drainage and checked in to a traditional Korean log cabin in a forest park. I drank a beer with Mr Lee while we discussed our respective fishing trips around the world and then sleep came pretty quickly with dreams of catching a trophy size lenok the next day. 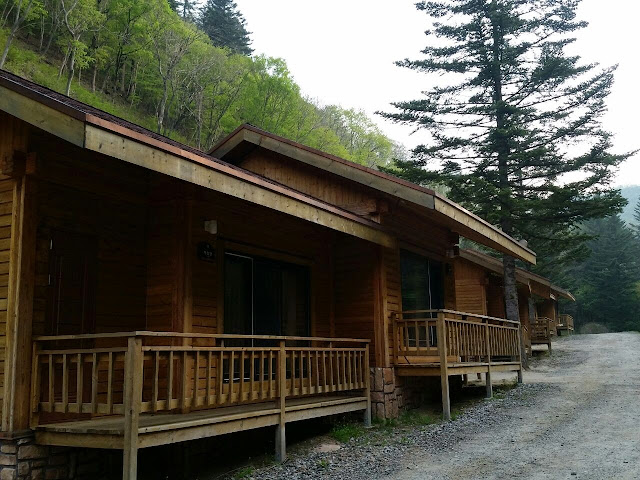 At 6am Mr Lee had a breakfast of toast, eggs and hot ham prepared and soon thereafter we were in his car on the way to River Z. Mr Lee had shown me photos of several trophy fish from this river and my excitement was palpable. River Z is a fairly large river and in the early morning haze whilst the sun was just peeking over the mountain tops I had caught ten lenok before an hour was up. None were trophy size but all rose confidently to the dry. It was an absolute pleasure being out on this river, flanked by steep, forested mountains and purple blooming azaleas.

A large hatch of pale mayflies lifted from the water at about 10am. At the time, I was fishing the fast pocket water and glides between two substantial pools, the kind of water with plenty of good looking slack water in front and behind rocks, and some enticingly deep holes. The mayflies fluttered about our heads before the wind carried them downstream where they were picked off by birds. Lenok rose to them with gleeful abandon and, provided the imitation could float free of drag for a second or two among the swirling currents, it would pretty much fool a lenok every cast.  So enthusiastic were the fish that in one surreal moment two lenok leaped clear out of the water at precisely the same time for my fly and head butted each other! The victor still managed to take my fly and I only just managed to keep the line taut and land it while laughing heartily with Mr Lee.

Lunch time came all too soon and by then I had caught something like thirty lenok. Mr Lee took me for a traditional lunch of pan fried tofu and mixed sides (the tofu is fried at your own table) and I had just as much fun over the two days sampling the local cuisine as I did catching fish. It does take some getting used to sitting cross-legged on the floor to eat at a low table, as it doesn't take very long for the joints to start aching! 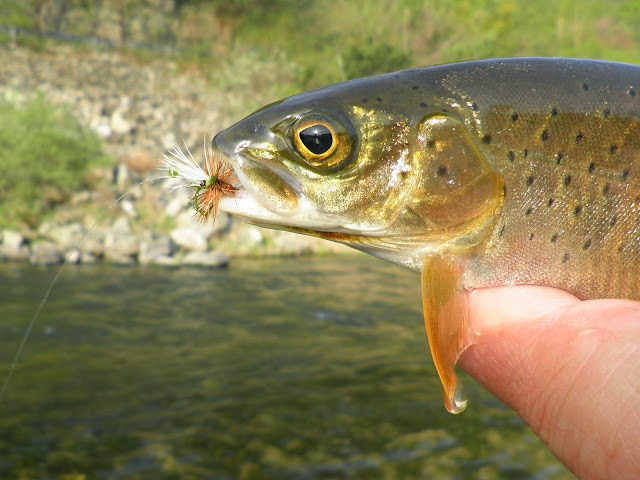 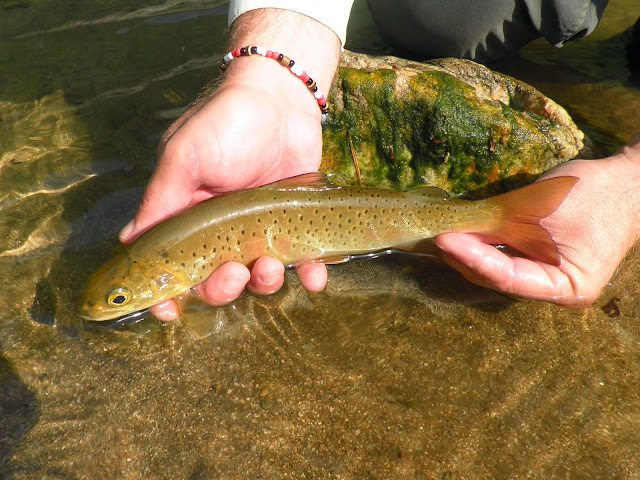 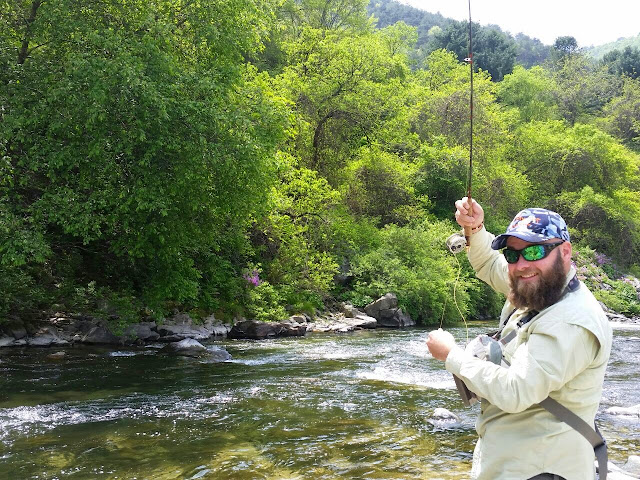 In the afternoon we fished a much smaller and more intimate stream where I picked off several more lenok. From a bridge we spotted several trophy size lenok in a single pool but it's perhaps no coincidence that the pool, flanked by cliffs on either side, offered no place from which to cast a fly. We stared longingly at the fish as they moved about the pool, tempting us with all the confidence in the world. By the end of the day I had caught something like forty-five lenok, all taken on the dry fly. It was a highly enjoyable day of fishing and I realised, a little sadly, that it brought to a close the Asian leg of my fly fishing travels. I've had great fun catching new trout species, exploring distinctly foreign lands and cultures, sampling great tasting local cuisine and making new friends.


If you're ever in Korea and need a fishing guide, get in touch with Mr Lee, or pop in to his dedicated fly fishing store in Seoul for a coffee and chat (it's a bit of a trek from the city centre but handily placed on the #8 subway line): Trutta Fly Fishing Store. Mr Lee's email address is in the contact information at the foot of his website. For the time being I take a little break from fly fishing and then I move on to the USA.