The month of May is traditionally the 'high water' run-off period in Montana, but there were some promising green shoots today, when I returned to a lovely looking creek west of Missoula. I had 'blanked' when I visited it two days ago, only fishing for two hours before an epic storm erupted over my head, but I could tell it held a lot of potential. It was flowing very fast then, but unlike Rock Creek it was running clear and looked very inviting. I promised to return.
In fact 'creek' is a bit of a misnomer in these parts - what they call a creek here I would consider a large trout river back in the UK.

I arrived at 11.40 a.m. and for the first hour fruitlessly lobbed a heavy stonefly nymph into the water. The guys in the fly shops here swear by them so I persisted. I began to despair and longingly fantasized of the trout in Wales that were probably at that very second gorging themselves on Ephemera danica.

I had to snap out of my reverie and focus on the next piece of water that came into view because I recall thinking something along the lines of "there's no way there cannot be a trout in that pool". The river was momentarily split in half by an island. With only half the water the current in the pool was more gentle and approachable. A gradual change of colour from light to dark green gave away a drop-off, always a good place to search for harbouring fish. 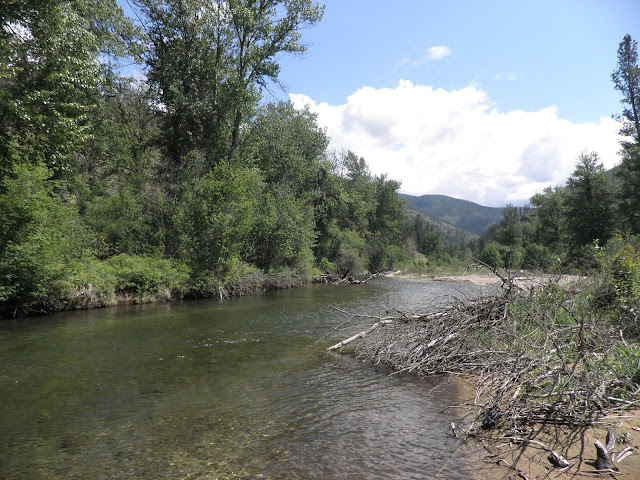 I decided a change of tactics was in order and changed the stonefly nymph for a team of smaller nymphs - a #14 Prince Nymph on the point and a #16 'Reckoner' Nymph on the dropper. Within a few casts my white plastic bubble thingimabobber dipped beneath the water's surface and I lifted the rod into the welcome throb of an agitated fish. The fish leaped out of the water at least three times, leading me some way down the river's bank, before it succumbed to the pressure and came within clutching distance. It had taken the Reckoner fly. I tried to work out what t was.  It certainly wasn't a rainbow. It was quite possibly a cutthroat but even then it had the beginnings of a pink lateral line and only just the faintest etchings of orange war paint on its jaw lines. I concluded that it must be a hybrid, what they call a 'cutbow' in these parts. Whatever it was, I didn't particularly mind one bit. I was happy to finally catch my first trout in Montana after some pretty tough fishing! 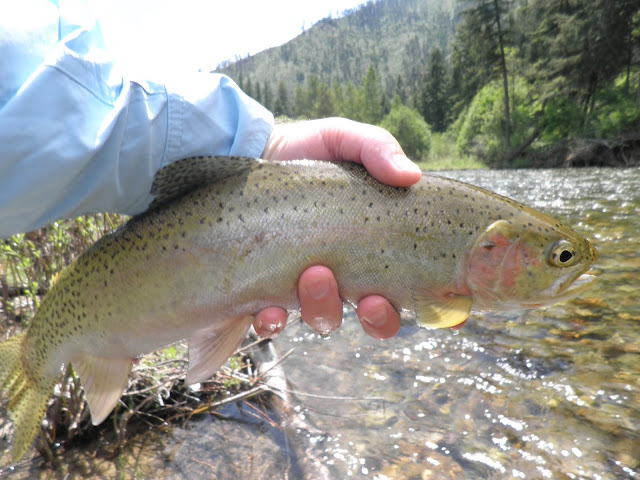 The next trout came from the same pool with the very next cast, and this one was unmistakably a cutthroat. Westslope Cutthroat are the state fish of Montana. It too had taken the Reckoner and I knew I was on to a winning fly pattern. Compared to the first fish, this cutthroat came to hand rather meekly, which perhaps confirmed my suspicion that the first had some typical rainbow trout tenacity in its genetic make-up. 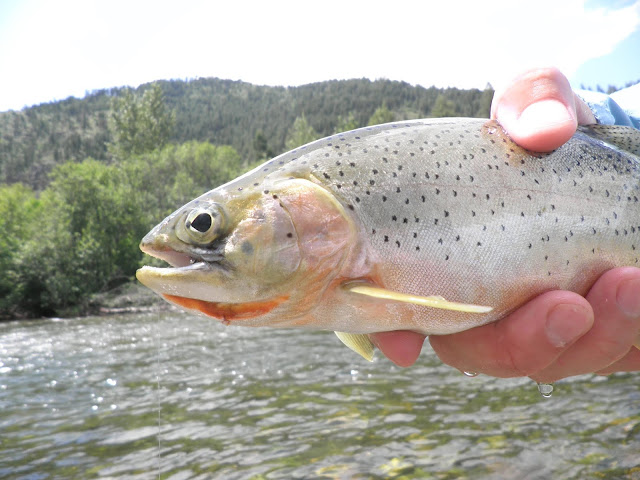 In the very next pool I saw something incredible - a rise! The first rise of this North American trip. I crept in to position and the video below shows the result. I was a little too eager on the strike and I hope you will pardon the whispered expletive...

There were at least four fish in that small run rising to olive mayflies. At least some of the mayflies seemed to be what they call the Green Drake here, fat and juicy looking, whilst the majority seemed to be a much sleeker and smaller species of mayfly. I missed two more takes before I finally caught a trout from the top of the pool. This cutthroat was full of colour - orange, yellow, pink and a caramel brown - but it had a scarred face. Its maxilla was missing, probably the result of a previous tussle with a spinner or lure. The effect was a permanently lopsided grin. 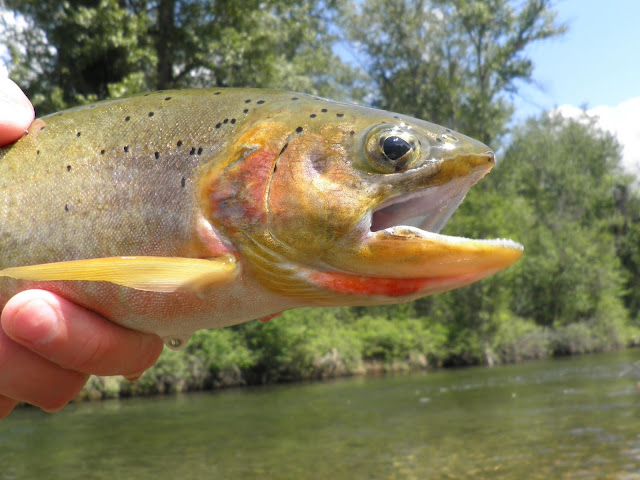 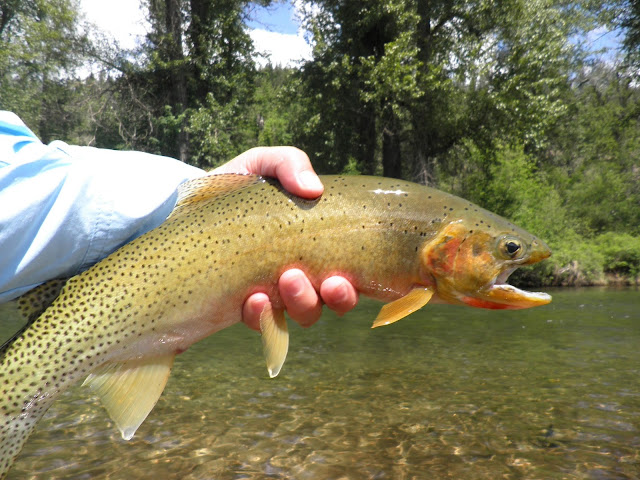 I think the secret of my success on this occasion was finding a quieter side channel where, free from the main current, the trout found it easier to hold and feed. In a quiet moment it occurred to me that catching a Westslope Cutthroat on this trip was the sixth new species of salmonid I have caught in the same number of weeks. I have been incredibly lucky! The fishing is only going to get better from here as the weather warms and the rivers drop.