The final instalment of a seven part catch-up series of my second trip to New Zealand in 2015.

I first met Pieter Koekemoer in February 2015, beside a river in the Southern Alps of New Zealand.

Having trudged a fair distance up the secluded river valley, I was disappointed to see another angler ahead of me. Etiquette dictated that the other angler had first right to the river. I could have turned back at that point, but I wanted to ask how the angler was getting on and perhaps gain a tip or two. I made up the ground and when I announced myself, the angler viewed me with suspicion. "Dropping in" ahead of other fishermen does happen, and there are tales of fist fights breaking out. I allayed the angler's concerns and, noticing his accent, asked 'are you South African?' 'Ja' was the reply, this time accompanied with a grin.

Pieter explained that he and his family had recently emigrated from South Africa. Having described himself as novice at fly fishing, we agreed to fish the river together, in the hope that two New Zealand novices might learn something from one another. As it turned out, we saw very few trout that day, and those we did see scattered from our bumbling attempts. We exchanged details and kept in touch, and Pieter's family opened their home to me, in the outskirts of Christchurch, whenever I was passing through.

When I returned to New Zealand during the following trout season Pieter and I met up once again, three days before my return flight to the UK.

As to the venue, I consulted John Kent's invaluable guide book for what would be the final time, and settled on a tributary unknown to the both of us. When the morning arrived, I met Pieter at the turn off from the tar road, where I left my car. We drove in Pieter's truck along a gravel road for almost 30km until we arrived at the end of the road. It was still early in the morning because we were keen to secure the tributary to ourselves. It was a race that we never stood a chance of winning. A campervan was parked on the scene, and as we pulled up and parked, the door opened, and a man emerged, still wearing pyjamas. He'd obviously just woken up and seeing two fishing sorts pull up next to his van, he was keen to mark his territory. The man was from the Netherlands, and politely explained that he'd camped overnight precisely to fend off the attentions of the likes of us. Pieter and I hastily hatched a plan B. We would fish the main river!

We knew little about the main river. John Kent provided a neutral rather than a glowing description of it. But unknown quantities can often provide the most rewarding surprises, so we set off undeterred through the trees, making for the main river.

Our river was tinged a pale green and flowed at a fast click, with water in places that would excite a kayaker. The audible gush of the torrent was the only intrusion in an otherwise serene valley, shrouded by an impenetrable forest of beech trees which grew from the river's edge to the peaks of the surrounding hills. As the last place I'd cast a fly in New Zealand for who knew how long, it was a worthy spot.

Pieter hadn't done much fishing since I'd last seen him. He told me that he'd tussled with a good fish but was thwarted at the moment of netting it. He was keen to finally land a trout. I had half a year's experience of fishing in New Zealand by then, and thought there was a reasonable chance of making his wish come true. I walked ahead on the lookout for trout. 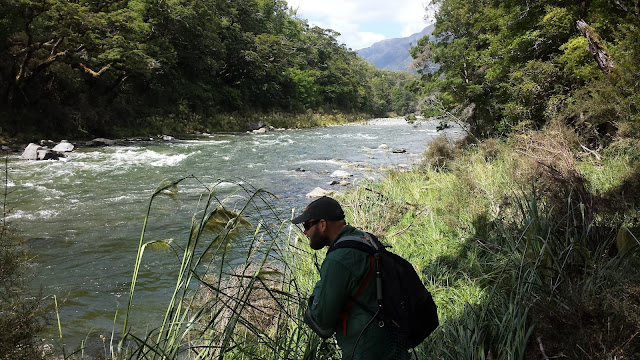 Very soon after starting our bankside walk, I spotted a trout near to our bank, where the shade of a beech tree fell on the water. Pieter graciously gave me the green light to cast to it. He said he wanted to observe and learn, which I thought was awfully generous. I entered the water with care downstream of the trout, so that I could cast a fly as directly upstream to it as possible, to combat drag. I went with the so-called New Zealand style set-up; a nymph tied to a length of tippet which was suspended from the bend of a dry fly hook. I launched my flies a few feet upstream of the trout, and ever so satisfyingly watched the dry fly dip beneath the surface, suggesting that the trout had consumed the nymph. I lifted my rod and confirmed the fact when the trout took off into the main current and then downstream. I held on to my rod for dear life, as the trout pulled fly line from my reel in a musical squeal. I glanced at Pieter on the bank who was filming the event and thought, 'what are you doing, man! Get yourself downstream with your net to help me land this trout!'  Pieter had a way to go yet in becoming the complete fishing buddy, but he recovered in style when he slipped the net beneath the tiring trout, and we celebrated together. It was an ideal start to the day. 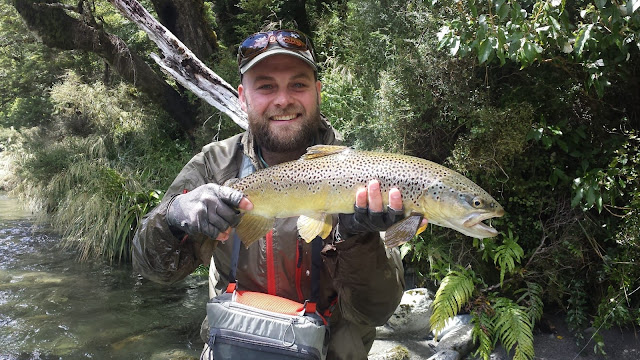 My fishing for the day was done. I folded away my rod, all attention now focused on Pieter accomplishing his mission. I became the guide and Pieter the willing student. I scanned some very attractive water without seeing a trout. As the minutes ticked past to an hour, the slow creep of pressure began to build. 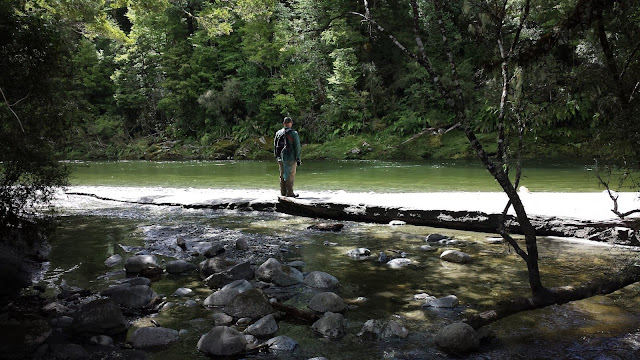 After walking a distance of around a kilometre, at a place where the river performed an almost 90° bend, I spotted an enormous trout (estimated at 7 to 8 lbs). The trout was holding in a lie upstream of a rock near the swiftly flowing centre of the river. It was a tricky and long cast for Pieter to pull off but he presented his dry fly perfectly, about 6 feet in front of the trout. As his fly drifted into range, the trout ascended from the riverbed to intercept it. The trout opened its cavernous white mouth and just at the point when it closed its jaws, the force of drag whisked Pieter's fly from the trout's mouth! We both groaned, the blow crushing, the missed opportunity haunting. The trout didn't move to the fly again. It knew something was amiss.

We moved another kilometre up the river in the afternoon. We encountered a trout in a deep pool on the outside curve of another sweeping bend, but it wasn't tempted by Pieter's fly. It was behaving animatedly and had probably seen us. I started to feel a bit rough about Pieter's plight.

Late in the afternoon we decided to call it day.  To complicate matters, a cliff now separated us from a return to where we had parked. We had to decide between wading upstream, to find a place to climb the bank, or returning downstream, the way we came. We chose the former. Barely a few steps later I hissed a warning to Pieter: 'freeze!' An indistinct shape had caught my eye in the water, which required further scrutiny. The shape moved ever so slightly and Pieter saw it now too. Here was a trout, and Pieter's last chance. We both laughed because the trout was only about 12 feet in front of us. We'd practically stepped on it! The trout fortunately remained blissfully unaware of us. It was lying in a calm bay beside a cliff wall, a relatively straightforward cast for Pieter to make.

As slowly as possible, Pieter checked his line and dry fly. All appeared ok. I had barely whispered, 'If the trout takes your fly, don't strike too soon, wait a second' before Pieter sent out his dry fly to the fish. It was a perfect cast. The fly touched down lightly. The trout rose to the surface, took the fly into its mouth, and submerged in a fluid and graceful motion. Pieter struck at just the right time. We watched as the trout shook its head furiously and we both cheered at the realisation it was firmly hooked. A desperate fight ensued. 'Let it run!' and 'rod up' and 'apply side strain!' orders were issued by me, as I held my net at the ready. Pieter was muttering prayers. When the trout was finally coaxed into my net Pieter wore a grin from ear to ear. Mission accomplished. It was a damn good trout too. 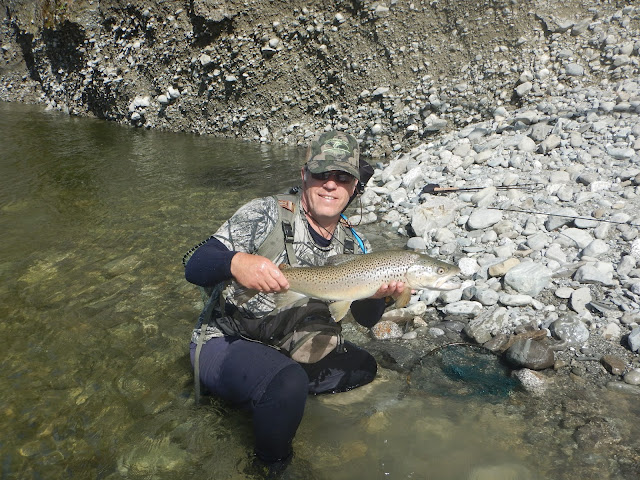 Pieter catching his trout so late in the day felt somewhat scripted. It enhanced our mutual feelings of reward, and I guess, buoyed by the moment, we decided to enter the trees where the sandy cliffs ended and scale the rise to where our cars were parked. It was somewhat heedless of us. Initially the ascent through the thick verdure was manageable, if slow, until we reached a place where the trees ended and a sheer cliff face of around 12 feet remained. We were too tantalisingly close to give up now. I interlocked my hands and Pieter stepped onto my shoulders and dragged himself to the top, then reached down to take both our rods. I had to scale the cliff face unaided, precariously clutching at roots and grasses and digging my boots into the loose sand, huffing and puffing, until I could eventually drag myself clear. Rather than offer his hand to pull me up, Pieter had his camera ready to take an image at the exact moment I crested the summit, out of breath. I guess he still had a way to go  in learning how to be the consummate fishing buddy! 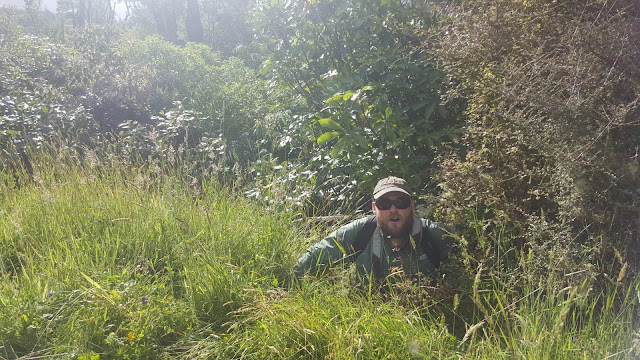 Three days later I flew from Christchurch to Auckland and then on to a snowy Ireland for a final two weeks of travelling before I returned to the UK and brushed up my CV.

The day with Pieter brought an end to a 447 day odyssey of mostly fishing adventures, through South Africa, Tasmania, New Zealand, Japan, South Korea and the USA. I was privileged that in 2014 all the necessary ingredients converged to allow me to embark on such an epic adventure - time, money, inclination and a lack of financial and family commitments. I look back on the entire trip with great fondness now, perhaps because I know that absent a life-changing lottery win I'm unlikely to ever repeat it. I'm off to buy a lottery ticket.