I left the campsite at Deloraine for the final time and drove west to the Mersey River. The landscape changed along the drive from agrarian to sylvan, pastures left behind as I entered mountains of eucalyptus forests stretching as far as the eye could see. It was hot, without a breath of wind, and the bright, still skies brought the countryside into a magically sharp focus. I appreciated being back in 'wild country'.

I had my sights set on a minor road which crossed the river, from which I could gain convenient access to the water. When I arrived, and peered over the bridge to catch my first glimpse of the Mersey, my pulse quickened. Flanked by thick stands of eucalyptus trees which almost grew to the river's edges, the water was crystal clear. The river flowed swiftly, coursing and bubbling over a bed of boulders in the classic sequence of pools and broken water. The river was fairly wide, wider than most I had encountered in Tasmania, and seemed pleasingly isolated. Some trout waters are just a whole lot better than others, and the Mersey promised much from my cursory inspection. A single thought dominated my mind: 'today is going to be good!'

I parked and set up my rod excitedly, and then walked down to the river where it flowed beneath the bridge. I cast a Royal Wulff into the main current and a trout rose to take it, but I mistimed the strike. I had a fairly good inkling then that a very good day was indeed on the cards. 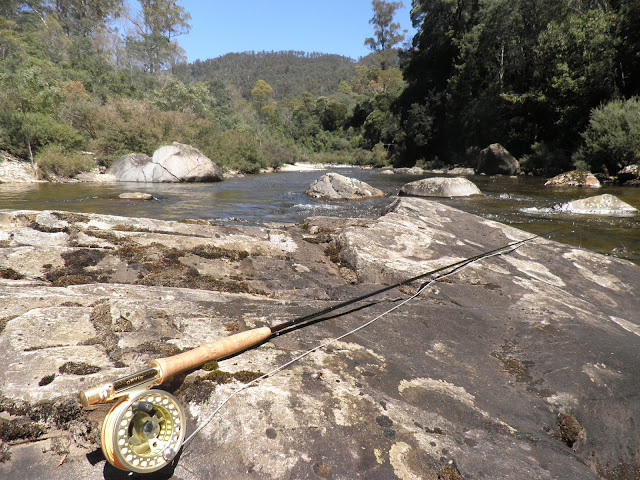 The river felt remote. The drive there had taken me a little way off the beaten track. My sense of isolation was encouraged by the dense forests and nearby hills. I was surprised then when I ran into a spin fisherman moving downstream, seemingly from nowhere. Later, I watched a cigarette butt float past me. Someone else was upstream too. Later still, another angler approached from behind, pushing me upstream at a swifter rate than I'd normally go. I didn't want to give up the water upstream to him. When he eventually turned back I could relax. It was only later that I learned about a campsite in the trees, which explained the traffic. The additional company was unexpected, but I didn't mind too much, as it didn't detract from my enjoyment. 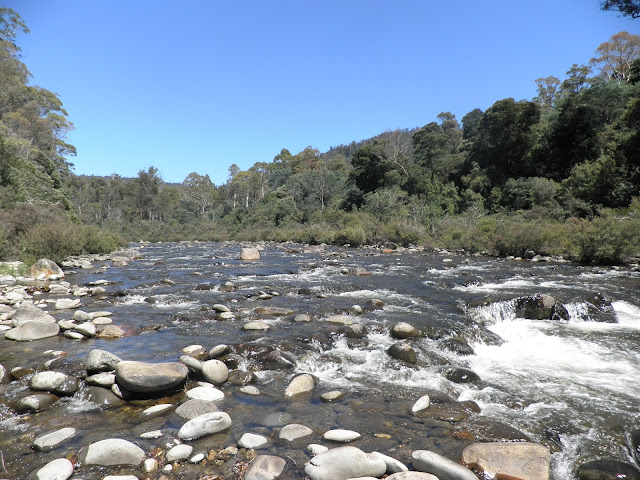 My enjoyment was in large part down to consistently catching brown trout with a dry fly. What more can one ask? I caught 23 trout in total, using only 3 patterns: the parachute Adams in traditional grey garb, a sherry parachute Adams, and a Royal Wulff. If fishing days were made in heaven, this day would come very close. 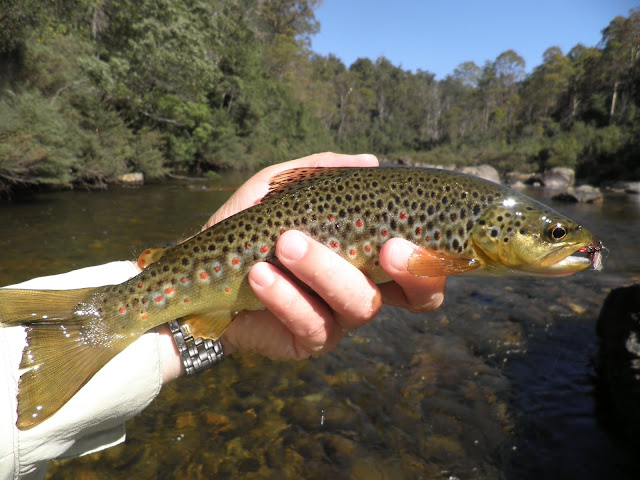 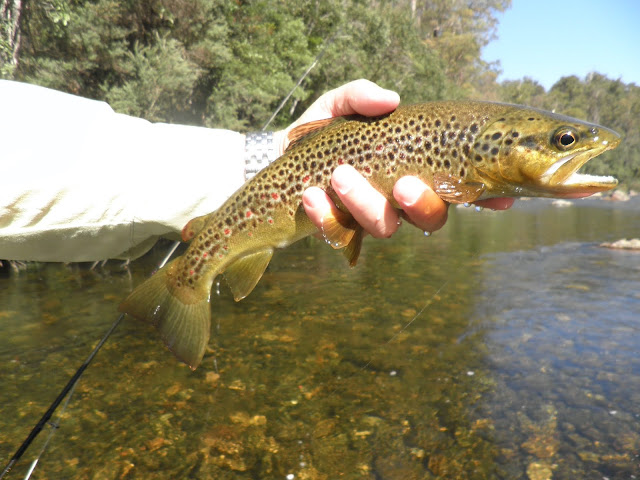 The most memorable moment came in the afternoon. About a metre from the true right bank, in a shallow run where the water quickened after being funnelled by large boulders, I saw a very substantial snout break the surface and sip in a hapless fly. The movement was assured yet delicate, and had all the hallmarks of a trout confident in its size. As I watched, the snout pierced the surface a second time. My nerves jangled in anticipation. The trout from the Mersey had until then averaged around 9 and 10" and it hadn't gone unnoticed that this was perhaps the smallest mean size that I had encountered in any Tasmanian river. The stakes had suddenly been raised. I will gladly catch minnow-sized trout to my heart's content, but I'm not too proud to admit that I prefer catching fatter trout to thin.

I had been using a Royal Wulff successfully until then and I covered the spot where I had seen the fish with the attractor fly, to no avail. I changed to a parachute Adams, hoping that I hadn't already disturbed the trout because it hadn't risen again. The angle of the sun meant that I couldn't see into the water. On its first drift the Adams was taken precisely where I had seen the rises. 'Yes!' It was a sizeable fish, my largest yet that day, but when I brought it to hand and viewed its generous 13" length, I thought 'wow, fish can look deceptively large in the water.' I was pleased, but it was a somewhat bittersweet moment, because I knew deep down that this wasn't the same fish. I was certain the commotion would've put paid to the larger trout too. 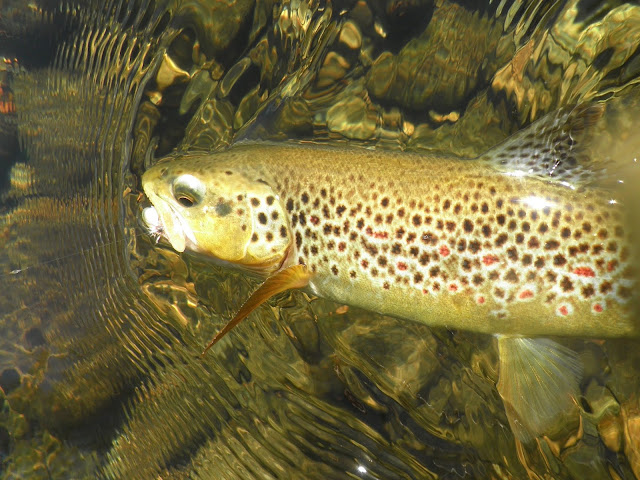 I decided to fish out the rest of the attractive run nonetheless. I cast my fly upstream and was stunned when the unmistakably wide snout reappeared and sipped in my fly, only three feet upriver from where the last trout had been caught. This time there was no doubt that I had the behemoth. I struck successfully and my nerves went haywire in the realisation that this was a special fish. I prayed the tippet would hold, simultaneously cursing the absence of a landing net. The trout deployed its substantial bulk in the river's current, running downstream, and I feared the line would break at any moment. Did I imagine hearing my 6x tippet groaning? The broad-backed trout persistently sought out the solace of tree roots at the river's edge but I managed to keep it away. The fish at last tired when I could grasp it with my hand, its girth a match for the outstretched palm of my hand. At 20" it was the largest trout I had caught in Tasmania. When I removed the hook I saw that that the gape had been opened so wide that the trout had come close to escaping. 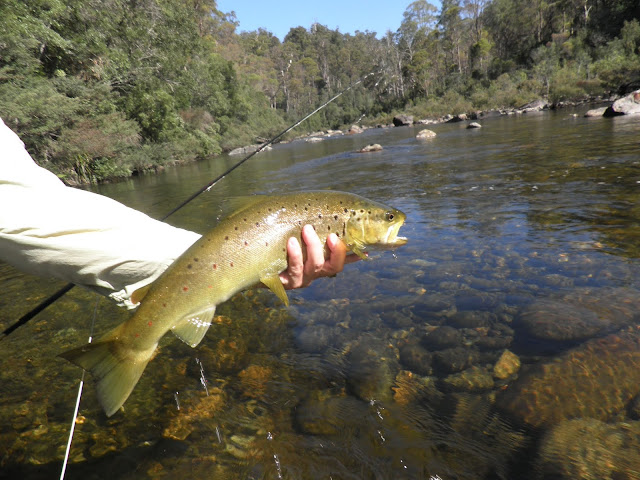 I knew I wouldn't top that special capture so I called it a day, basking in a warm flush of gratification and triumph as I navigated the bouldery river back to the bridge. This was a red letter day, hands down the best day of fishing during my visit to Tasmania.

My days in Tasmania were running out so rather than camp nearby, I drove further west, into the evening, through stunning mountain passes until I reached the Leven River, and found a free campsite at Leven Gorge. I'd fish the Leven in the morning. 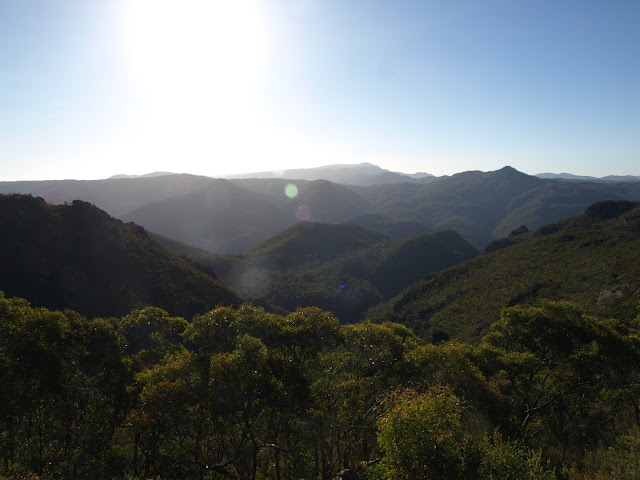 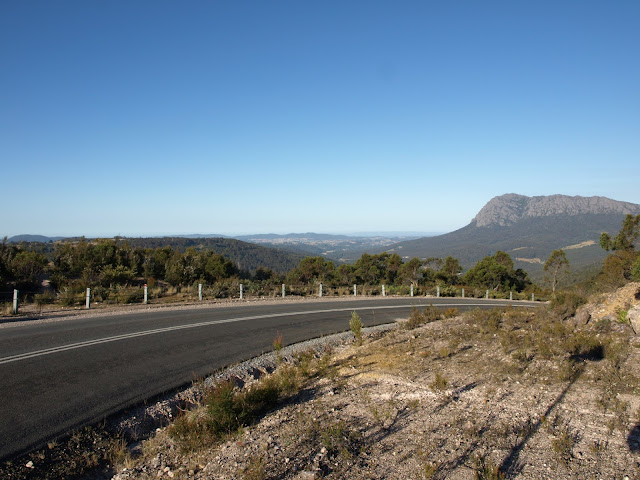 After a long day I was starving. Just as I set up my camping stove to cook a packet of cheese and bacon flavoured pasta, my gas ran out! I started a wood fire and resorted to boiling the pasta in a pot over its flames. Dinner was delayed, but the wait made it taste even better. Looking back over such a fine day's fishing was the sweet dessert.