Several weeks ago I decided to book a day with a guide to learn as much as I could of New Zealand fishing methods. Chris Dore came highly recommended and whilst initially he could not accommodate me because of an already full schedule, he volunteered to use one of his rest days.
I met Chris in Queenstown, early in the morning when the sky was still dark. After a brief chat about my fishing experience, he decided to take me to perhaps the most well known of the big trout rivers in the district. Unfortunately the day itself turned out to be the worst day of weather since my arrival in New Zealand. A strong, almost permanent gust of wind from the west (blowing downstream) made casting exceedingly difficult and from mid morning it rained and never let up until 5.30pm when we were already back in Chris's 4x4 on the road back to Queenstown. It was grey, cold, windy and wet, and the miserable weather made it difficult to spot and cast to fish. I cursed my foul luck at paying for a guide on such a day. Fishing with a guide on a river known to have large trout certainly set my expectations sky high but on a hideous day like this, I quickly had to temper my outlook.
I learned a lot about spotting fish. Chris had an uncanny knack for spotting trout, even in the sub-optimal overcast light, rain and wind-rippled waters. He also suggested and showed me how to fish large, heavy streamers in the deep pools and past the bank undercuts, something I'm not particularly familiar with. I had no takes on the streamer though.
Chris was an exceptional guide. He put me on to about five fish which were happily feeding, some of them in the 8 lb range at least, and for any guide this is a job well done. This is where the angler's skill has to prevail and unfortunately I came up wanting in the wild wind. The trout in this river see a lot of pressure and consequently they are are ultra spooky. You get one or two casts at most before they somehow know they are being pestered by a sharp piece of steel wrapped with fur and feathers. In the strong wind I tended to get my cast in the right place only at the third or fourth attempt and this was simply not good enough. It didn't take much for the large grey 'smudges' to melt away.
I also freely admit to suffering a bit of stage fright on the occasion - it's hard to control the nerves when asked to cast to such large fish, when the margins for success are so small. I cannot stress enough the importance of improving your casting accuracy before coming to New Zealand (and being able to do it in strong downstream winds).
The day was completely rescued when I managed to catch a 4lb brown trout with a nymph. It was sitting tucked up against the true right bank. It felt a terrific reward after I had fluffed the several earlier opportunities. Even on a day of really bad weather, Chris had worked a miracle, and I was grateful. 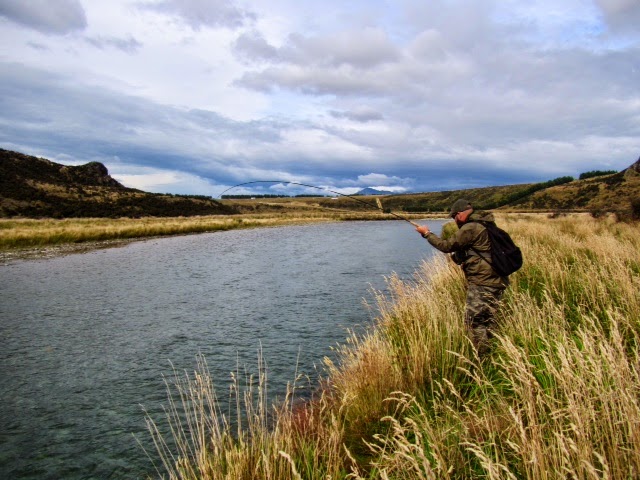 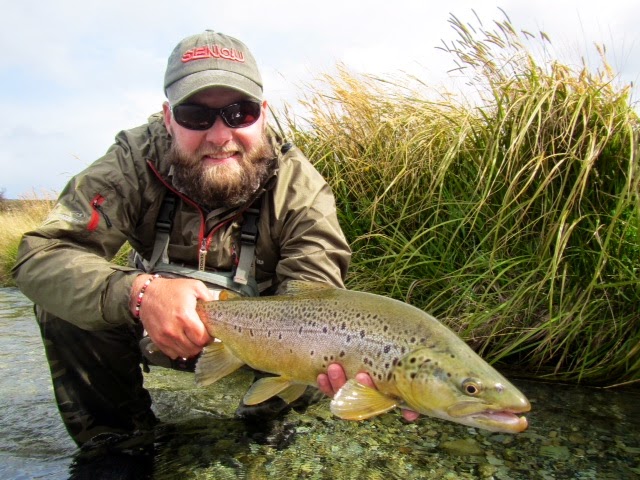 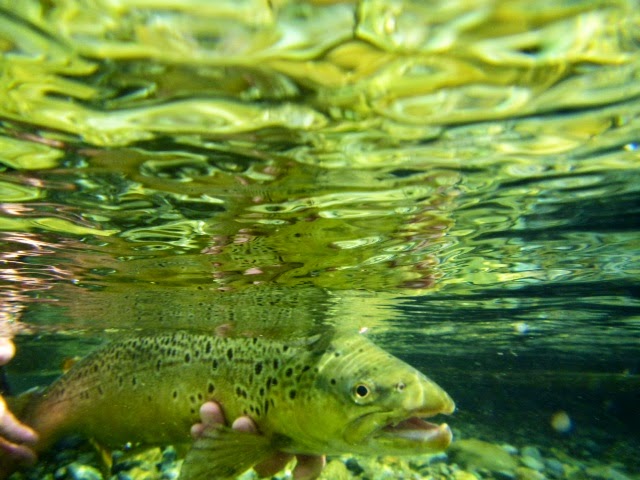 I think it's easy to build up a wild expectation of a guide as a trophy-trout miracle worker. My goal for the day had been to beat my personal best of 5 lbs, which I thought was a modest and achievable aspiration. Later that night, as I lay wrapped up warmly in my sleeping bag in a campsite in the town, I felt a little disappointed that I had not tussled with a truly large fish. I was disappointed that my day coincided with a spell of rotten weather. I allowed the large cost of a guided day - to a backpacking trout bum like me - to influence my sentiment. Deep down I knew it was my inability to cast proficiently into a strong wind that really frustrated me. But the more I thought about it, the more I realised just how much I had learned from Chris, and I knew that the lessons from this day would be put to good use over the coming weeks.
For now the quest for a 5 lb plus trout continues!
Labels: New Zealand