The East Midlands of England would not by any stretch of the imagination be considered a region with an abundance of trout streams. There is of course the wonderful trout fishing in the Derbyshire Peaks on the very western edge of the region, but what I have in mind is the flat, low lying expanse of land to the east of the peaks where rivers of the kind preferred by trout are rare. Here, most of the fly fishing opportunities are focused on a cluster of large man-made reservoirs such as Rutland Water, Grafham, Pitsford, Ravensthorpe, Eye Brook and, by all accounts, they offer excellent fishing if stillwater fishing is your cup of tea. There are only a handful of trout streams, most if not all locked away in the hands of private owners or fishing clubs with long waiting lists. It isn't the easiest place to gain access to river trout fishing. 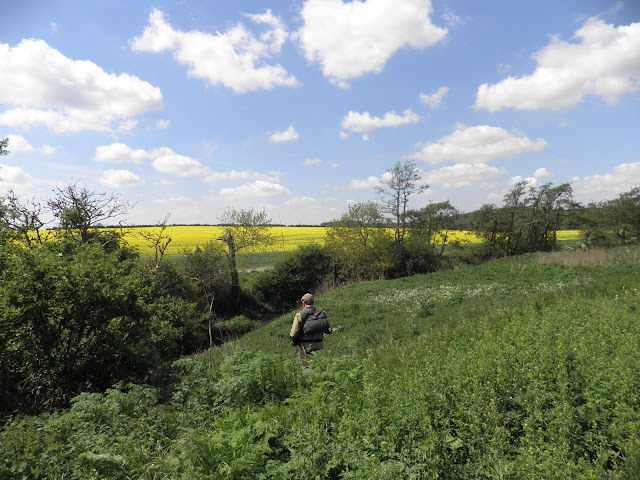 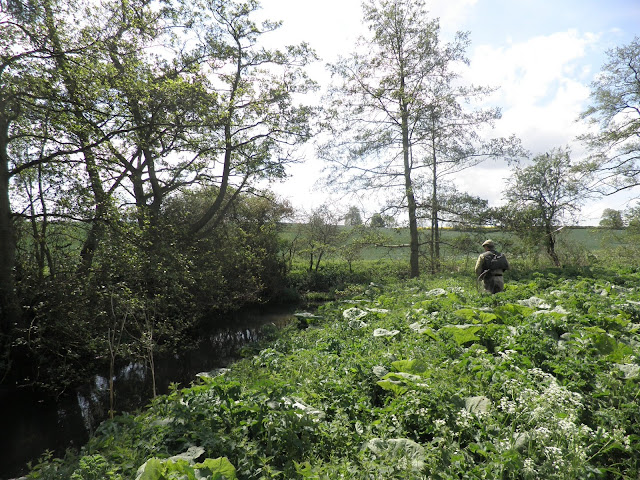 One such river is the Gwash in Rutland, which was dammed to create Rutland Water reservoir in the 1970s, the largest reservoir in England by surface area. Rutland is a very popular fly fishing venue with rainbow and brown trout stocked in their thousands each year. In case you are wondering, the outflow from the reservoir is through an underground pipe so there is no chance of any large, grown-on fish escaping into the Gwash downstream!
For about six miles downstream of the reservoir, before the Gwash spills into the larger River Welland just east of Stamford, the river is what would be described by American readers as a 'tailwater' fishery (the flow is regulated and water temperature is affected by the release of colder water stored at the bottom of the reservoir near the outlet). Much of the fishing here is in the hands of a fishing club but a couple of miles are held privately by Andrew Flitcroft, editor of Trout & Salmon magazine. I snapped up a rare opportunity to fish this private section with Andrew through the Wild Trout Trust’s annual auction.
Interestingly, I recalled reading the name Gwash in an online snippet at the time I fished the River Wye in Derbyshire last year. The Gwash was named as one of eleven rivers in Britain with a spawning population of rainbow trout in E. Barton Worthington’s 1941 survey of rainbow trout in Britain (commissioned due to concerns that rainbow trout were ousting brown trout in British rivers). Today, it would seem that any population of self-sustaining rainbow trout in the Gwash has long since disappeared. Perhaps swallowed up by the construction of the reservoir? 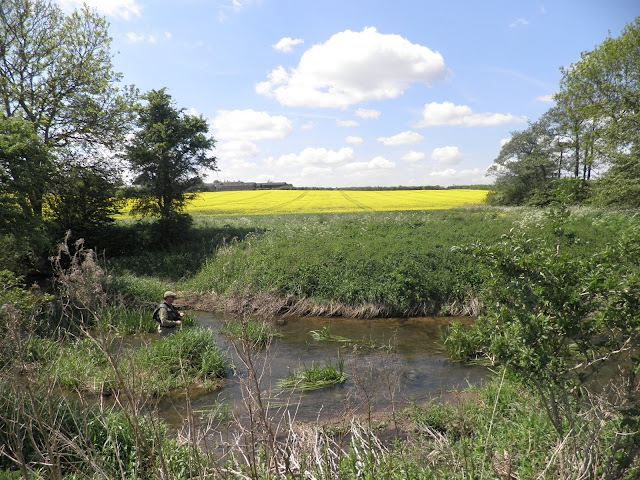 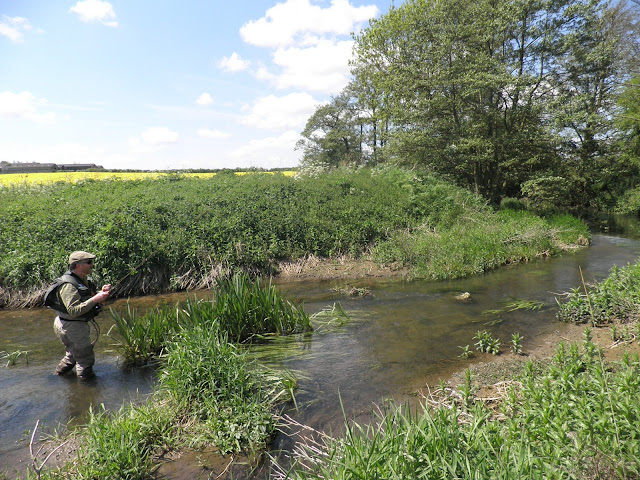 Andrew is down-to-earth and clearly very passionate about fly fishing, and I enjoyed his company. He was an obliging host and a skilful fly fisherman to boot. Whilst enjoying a pretty authentic American diner breakfast, Andrew mentioned that his section of the river is divided into an easier beat downstream, with generally smaller fish, and a more difficult beat upstream, with...you guessed it... generally larger fish. We headed for the upstream section first. Parking near to the river, it became clear that the temperature forecast of less than 10 degrees was hopelessly wrong. With relatively clear skies it promised to be a beautiful, warm day with good prospects for a decent hatch.
The river was hidden by a sinuous slip of green vegetation at the basin of the shallow valley. The fields on the near bank were bare and exposed, recently ploughed between the hedgerows, whilst the fields on the far bank were awash in the yellow of blooming rapeseed. I was immediately struck by the blissful absence of any man made sound, interrupted only by the intermittent sounds of light aircraft and a bird scare device in a nearby field. 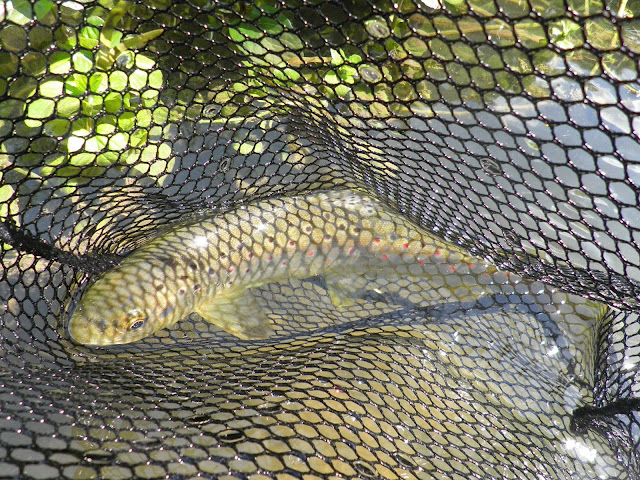 The Gwash is a small river with a gentle flow. Andrew commented that the river was showing a little more colour than usual, but it was still clear enough to spot fish easily enough. We carefully walked upriver, looking for signs of fish and places where a cast could be made to them. Eventually we came across a feeding fish holding position in a place where I could enter the water downstream and cast to it. I quietly slipped down the nettle covered bank and into the silty bank ooze. Wading in the stream caused blooms of watery dust to billow downstream. The level of silt is a by product of the reservoir upstream - the volume of the outflow is regulated and the lack of flooding means that the river is not flushed clean as nature intended. This upstream section has not yet been worked on by Andrew and his syndicate members, but later I would see the good work done to combat the silt in the downstream beat.
At that moment in time however my concentration was squarely focused on the trout rising in front of me. My first and second cast saw my 7x tippet coiling like a tightly wound spring around my leader without spooking the fish, so I changed it to 6x and waited a while for the fish to rise again. When it did I cast again, this time the leader unfurled properly and delicately landed on the water, and the trout obliged by sipping in the small olive CDC pattern. It proved to be a good fish of about 12 inches, beautifully marked and wild. 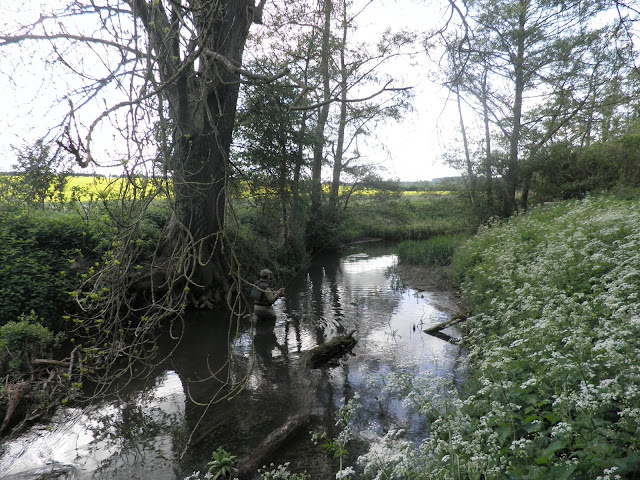 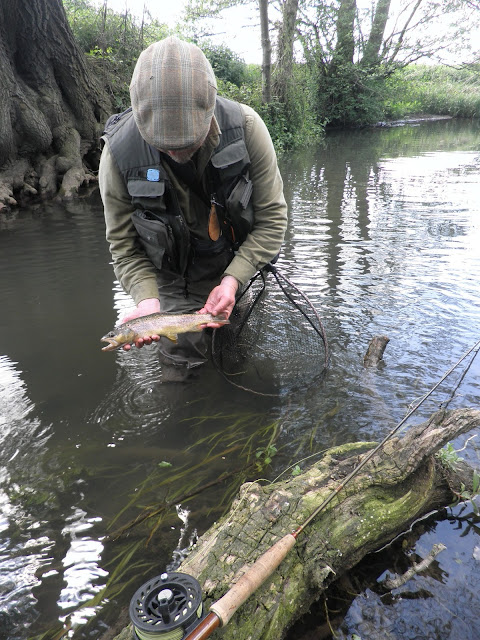 As the day started to heat up mayflies started to emerge and with their appearance the fish noticeably became a little less cautious. As did I when I waded a little too carelessly in the silt next to the river. I became stuck and a little apprehensive when I realised that I was slowly sinking. I threw my rod, backpack and chestpack on to the bank and tried to dig myself out to no avail. Andrew, who had wandered off to spot fish, came to my assistance when he realised I had been gone awhile but couldn’t pull me out either. I had visions of Andrew having to call a local farmer to bring a tractor to drag me out and the ensuing embarrassment. Eventually I was able to free my right leg from the mire and use it to dig a funnel for river water to flood in and dilute the ooze ensnaring my trapped left leg. My left leg finally loosened and became free and Andrew pulled me out whilst I grabbed a handful of nettles – anything – with my free hand to pull myself up the bank. Muddied, out of breath but free, we both laughed with some relief at my recent predicament.

Very soon it was all business again as we spied a good fish feeding next to our bank just a little way upstream. We watched it feed for a little while and I enjoyed adopting the patient and visual approach to fishing that Andrew employed. I changed patterns to a mayfly, slipped into the water – after Andrew assured me that the bottom was hard – and crept into position. I overcooked the first two casts and was too wide to the left with the third. Andrew suggested that I hold off for a few minutes to see if the fish was spooked or still feeding. Within a few minutes, the fish rose again and I breathed a sigh of relief. My fourth cast was perfect and my fly was confidently swallowed by the trout. I lifted my rod and could immediately tell by the bend that it was a good fish. Andrew helped me to net it, a good fish of about 14 inches, with bold vermilion spots on its flanks.
Another trout had been rising a little way upstream and a further cast saw this fish come to the net too. Again, this fish was a good size for the limited proportions of the stream, about 12 or 13 inches. Andrew later enticed a similar sized fish from the upper limit of the beat to conclude a successful “morning session” (it was closer to 3.30pm when we checked the time). 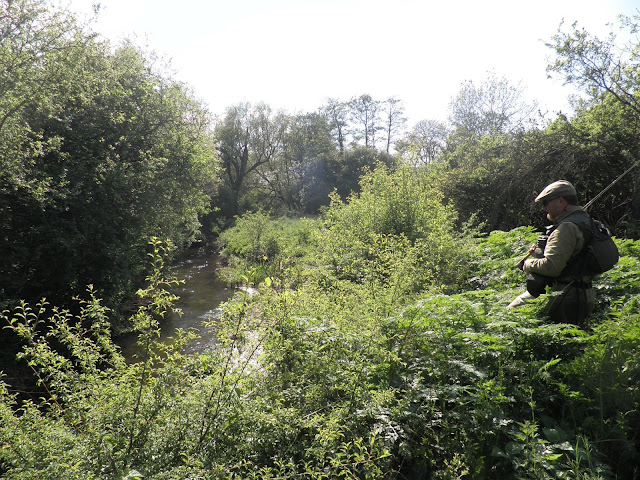 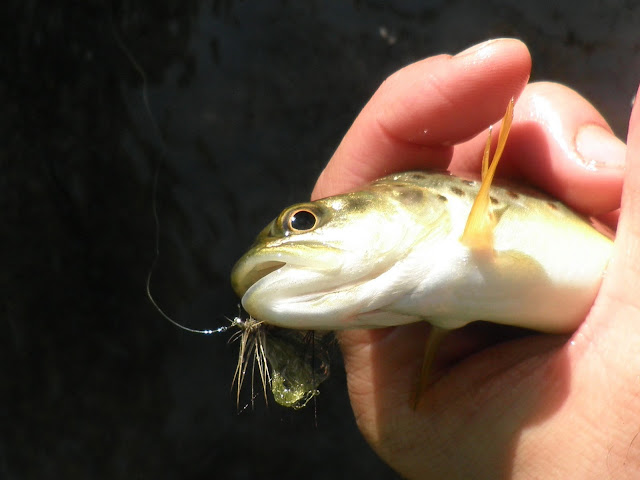 We drove down to the lower beat and the work that had been put in to the river to make the trout habitat better, and improve the fishing, was immediately apparent, including tree clearance, narrowing the river channel, creating bends and the insertion of groynes. The fish did prove to be a little smaller, but no less fun to catch and I managed to tempt another seven trout to take a dry fly. In the low evening sun it was sometimes possible to see into the water and observe the fishes’ reaction to the dry fly, which must be one of the most exciting moments of dry fly fishing. 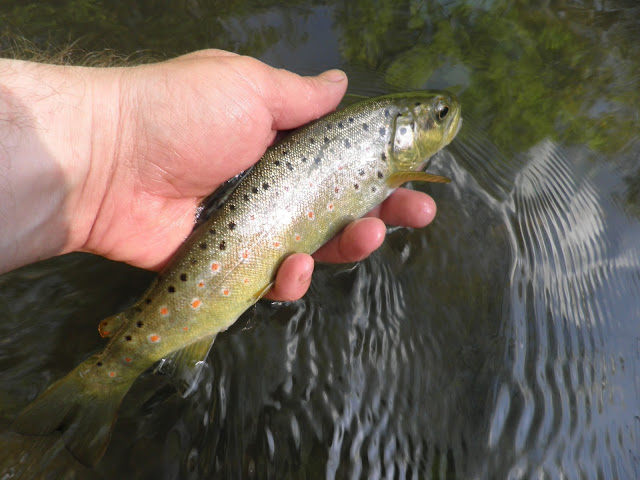 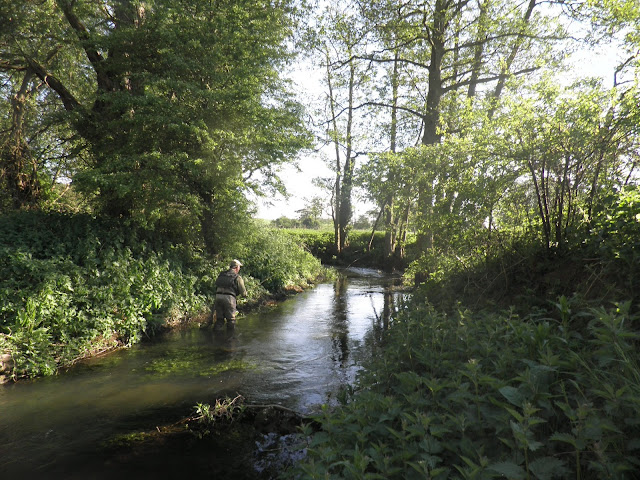 It was a real privilege to have fished this private river and I will savour the experience for some time to come.
Labels: England