Urban fly fishing has been something of a craze in the UK recently, in large part thanks to Theo Pike’s book "Trout in Dirty Places". Of course, it wouldn’t be possible if British rivers were not the cleanest they have been in decades, if not centuries. Trout and grayling have returned to many city centres across the country and there is a pleasing incongruity about this. It's quite unexpected to contemplate salmonids amongst litter and waste and human design. In the case of the River Don in the centre of Sheffield, I discovered that trout and grayling are present in very healthy numbers. It was here that I experienced my first taste of urban fly fishing, hemmed in by brick and concrete and bridges spanning the river at intervals, congested with traffic. The sounds of general human commotion were all encompassing, but momentarily forgotten when watching olives and caddis lift from the water or when a trout or grayling would rise to feed upon them. I had found an oasis of calm amongst the chaos of urban clutter.

I came across an excoriating quote about Sheffield in George Orwell’s 1937 book "The Road to Wigan Pier". Clearly, Orwell was no admirer of Sheffield. Opinion aside, it does provide an insight into the sights, sounds and squalor of industrial Sheffield, the "Steel City", including a brief mention of the river at the city's heart.
"But even Wigan is beautiful compared with Sheffield. Sheffield, I suppose, could justly claim to be called the ugliest town in the Old World: its inhabitants, who want it to be pre-eminent in everything, very likely do make that claim for it. It has a population of half a million and it contains fewer decent buildings than the average East Anglian village of five hundred. And the stench! If at rare moments you stop smelling sulphur it is because you have begun smelling gas. Even the shallow river that runs through the town is usually bright yellow with some chemical or other. Once I halted in the street and counted the factory chimneys I could see; there were thirty-three of them, but there would have been far more if the air had not been obscured by smoke. Once scene especially lingers in my mind. A frightful patch of waste ground (somehow, up there, a patch of waste ground attains a squalor that would be impossible even in London) trampled bare of grass and littered with newspapers and old saucepans. To the right an isolated row of gaunt four-roomed houses, dark red, blackened by smoke. To the left an interminable vista of factory chimneys, chimney beyond chimney, fading away into a dim blackish haze. Behind me a railway embankment made of the slag from furnaces. In front, across the patch of waste ground, a cubical building of red and yellow brick, with the sign 'Thomas Grocock Haulage Contractor'." 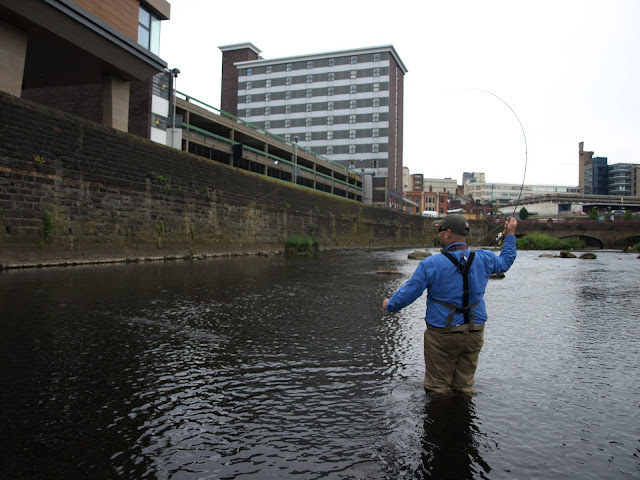 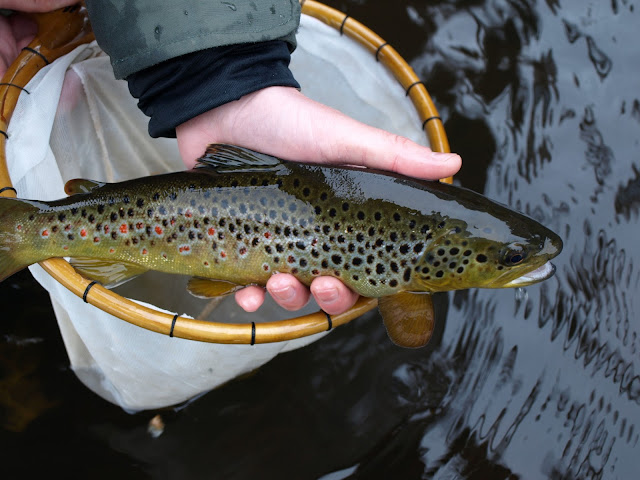 Today, you couldn't imagine a more different picture of the river (and city) from that described by Orwell. Chimney stacks have made way for modern glass designs and the skies are thankfully clear of smoke. As for the river, I was immediately taken aback by its clarity. It looked clean. The only evidence I could see of an industrial past were two large mill stones wedged in the river bed and residual ochre from past mining activities. I was even more surprised to witness fish rising! Despite the river being straightened and canalised, the presence of large boulders and a small island mid-stream, and wild flowers and ubiquitous nettles along the bank, lent the river just a hint of a natural feel. 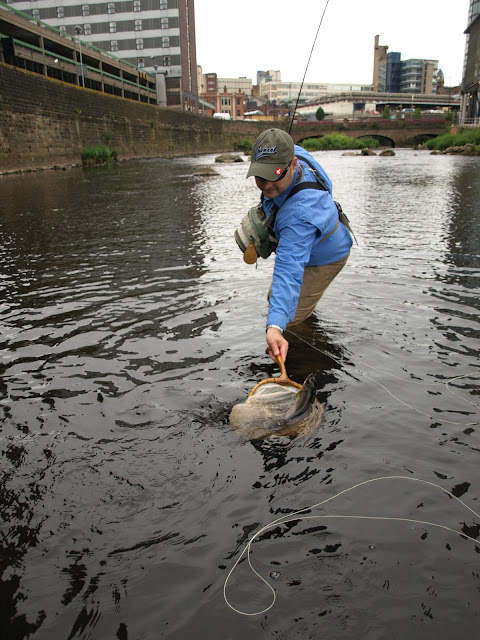 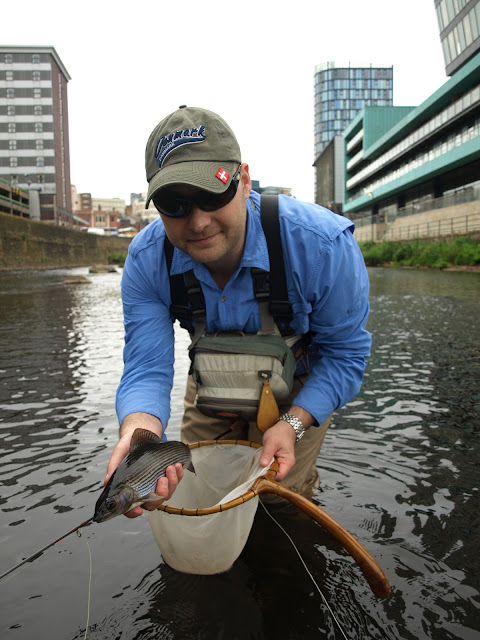 Thanks to a successful bid in this year's Monnow Rivers Association auction, I was accompanied and guided by Dr Paul Gaskell, a Sheffield resident and tireless employee of the Wild Trout Trust. Paul is a very knowledgeable angler and it's fair to say I learnt a great deal from him on this visit. Paul is also a Tenkara fanatic and I was really interested to see this method in action for the first time. The presentational advantages of Tenkara on a river such as the Don were very quickly apparent to me.
Paul collected me from the city centre train station. After a short drive in his car, we suited up in our waders in an NCP car park. Passers by, mostly weekend shoppers, stared at us curiously. We entered the river at 10.30 a.m. under ominously grey skies and it did begin to rain briefly. Fortunately, the rain held off from ever amounting to anything serious, but I did later notice several storm drains discharging surface run-off into the river.
Several fish were rising in the vicinity and my second cast, with a small black Klinkhamer, saw a good sized grayling rise and take the fly. I struck and rejoiced at feeling the firm connection, especially so soon into my foray. I scooped the grayling into Paul's wooden Tenkara net, an aesthetically pleasing round design with a curved handle. A courier wearing yellow and red livery paused his business and nonchalantly observed the capture from the top of the brick embankment. A jogger ran past without a sideways glance. Life in the city otherwise carried on as normal around me. It felt surreal to be so near yet so distant, standing knee-deep in the water, from the hustle and bustle of city life. 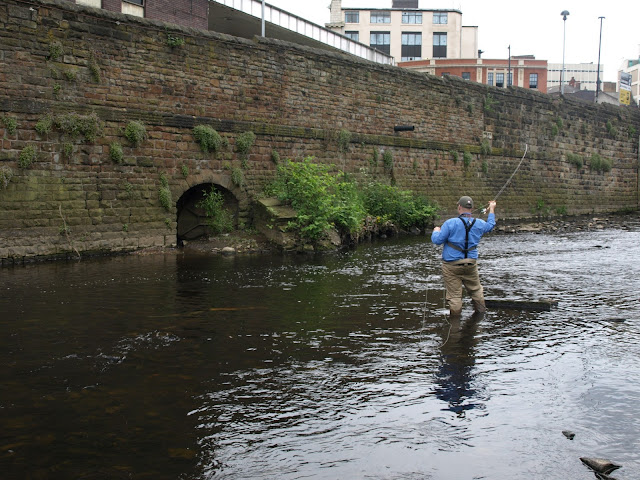 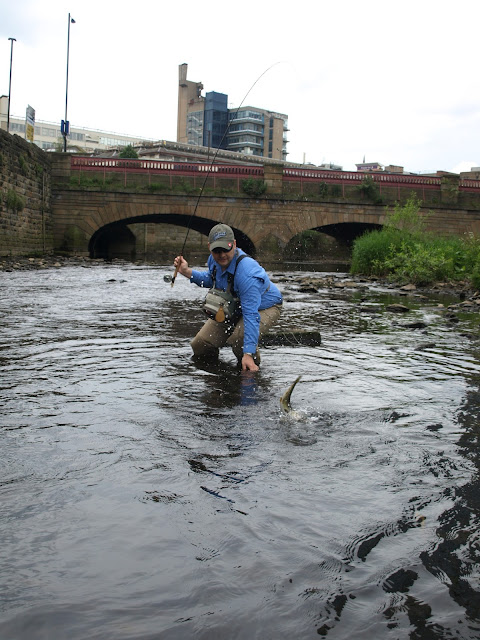 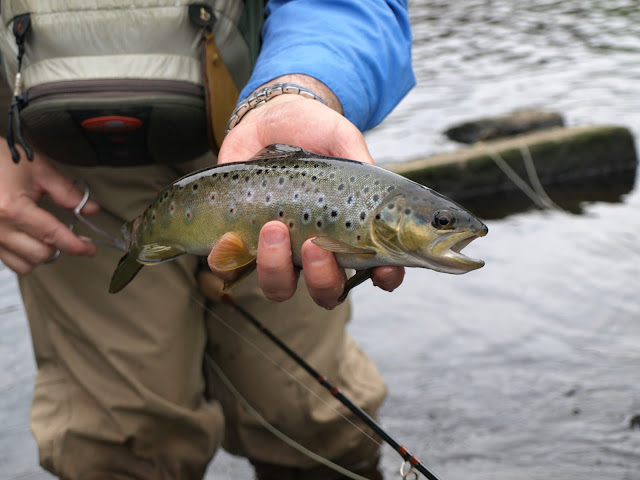 Fish continued to rise sporadically and when the Klinkhamer failed to elicit further interest I changed my fly, gratefully accepting one of Paul's self tied olive emerger patterns. The change in fly soon bore fruit. I brought a couple more grayling and a broad shouldered trout of about thirteen inches to the net in quick succession. The fish, and the trout in particular, had clearly been feeding well. They were in excellent condition. It suggested that the Don has a very healthy invertebrate menu on offer.
Every now and then a passer by would shout out "have you caught anything?" or "can you eat fish from this river?" One gentleman, with a broad Yorkshire accent which I strained to understand, said, "when I was a boy there was nowt in this river."  He watched as I continued to fish and tempt two trout to take a small bead head nymph from a fast flowing riffle. We only fished a short section of the river in the morning. We had no need to explore any more of the river in the city centre because the fish were abundant and we took our time. Even in its urban setting, the Don is very obviously an extremely productive river. It was a fun and very different experience.
In the afternoon, Paul drove me to a small tributary of the Don, no more than a ten minute drive from Sheffield's centre. How I wished that my home city of Birmingham, of equal industrial infamy, had such trout fishing within its centre and surrounds! The tributary, a small peaty stream, flowed through a ravine and was shrouded by trees. The sounds of traffic and people were soon forgotten. Even here, away from the city centre, we came across the signs of an industrial past - an artificial pond in the river, previously used to power a mill. Splashy rises in the water signalled the presence of mayfly. I realised rather wistfully that these were probably the last mayfly I would see this year. As the obliging host, Paul proffered the use of one of his own mayfly creations, and I soon hooked and caught a dark, tea-stained trout of about nine inches. Paul then caught a perch, which he said was the first he had caught from this stream. 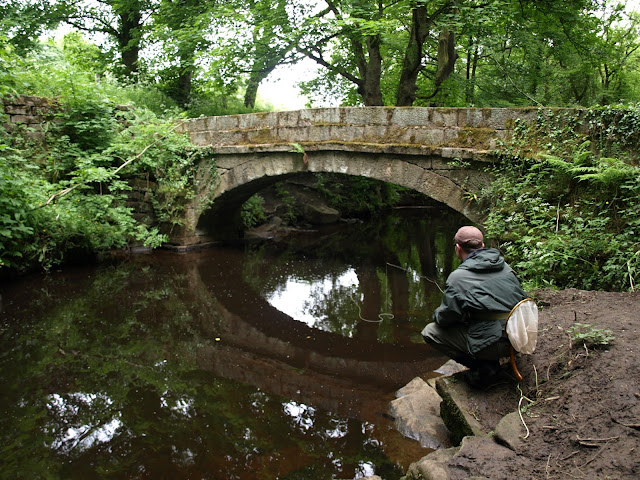 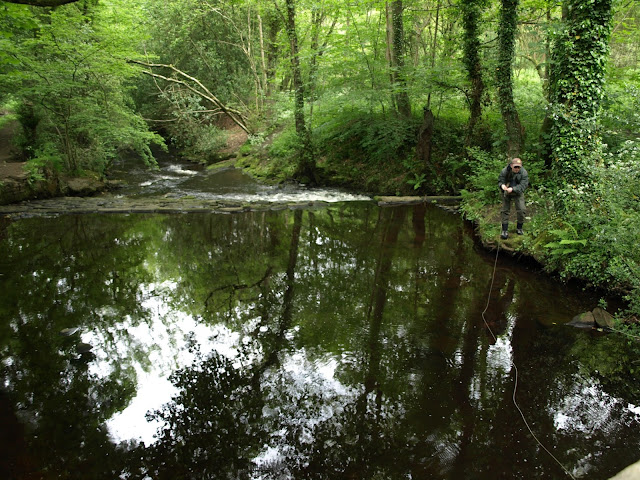 We fished up the small stream and, as we went, Paul showed me a few new things. I soaked it all in, grateful for the masterclass. I caught another trout, this time with an Olive Paradun, and lost two more which had taken the nymph. It was 4.30 p.m. when we called it quits. I had a return train to catch home to Birmingham. 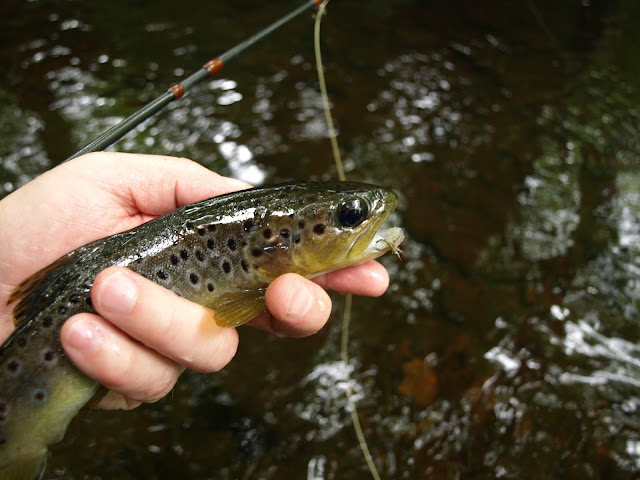 I normally go fishing to get away from the city and human commotion. Before today, I hadn't known what to expect when combining the two. In truth, I was pleasantly surprised. It is fantastic to see these once abused rivers spring back to life, clean enough to once again sustain trout and grayling. There is hope if a river that ran bright yellow with chemicals in my grandparents' lifetime can now run so clear and contain so much life.
Labels: England