I stayed at the Hotel Bräurup in Austria with my family in late September. The hotel has operated since 1823 and has 130km of alpine rivers under its control. Its logo is a leaping trout and the wood-pannelled walls of the hotel are adorned with taxidermy trout and grayling, the sort of place I feel right at home. I met Udo, my guide for the day, in the hotel's fly fishing shop early on Wednesday morning, and he suggested that I fish the jewel in the crown of the hotel's waters - the Krimmler Ache.

In the Krimmler Ache I found something remarkably close to my idea of fishing heaven. Flowing 1,600m above sea level in the High Tauern range of the Central Alps, the river starts its life at the northern most point of Italy and flows almost due north for 14km into Austria, where it tumbles vertically for half a kilometre over a series of three thundering waterfalls. 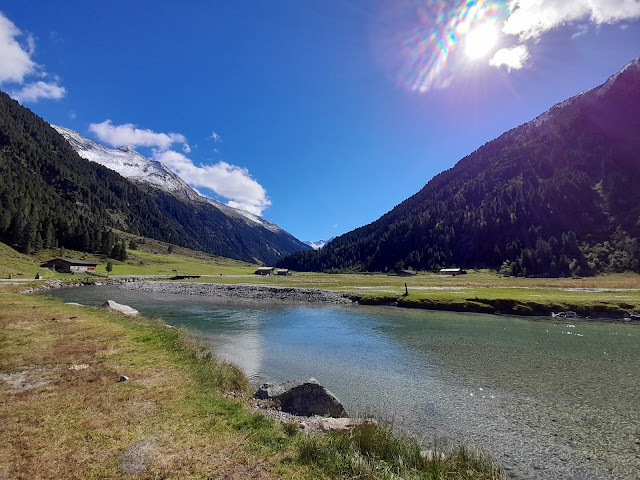 The drive up the sheer side of the mountain to reach the alpine meadow above the falls was quite special. The gravel track clung tenuously to the mountainside in a series of tight hairpin bends. Udo turned to me and asked if I was feeling ok because some of his guests find the drive disconcerting, but I was enjoying every second of it. It was a privilege to take the road because it isn't accessible to the public, especially the hordes of visitors who descend upon the waterfalls, which is one of Austria's most popular tourist sites. Mere mortals who are fit enough can cycle or walk up the mountain trails only.

Near the top of the escarpment a rudimentary tunnel hewn by hand stretched deep into the mountain, with just enough space for a single vehicle. When we emerged into the light at the other end we were past the falls and into the wondrous alpine meadow with its lively turquoise river at its heart. Snow capped mountains which reached 3,000m in height hemmed the valley and dominated its landscape. I stood in awe of their scale and the multiple waterfalls of melting snow which tumbled down depressions and ravines for many hundreds of metres. I have never felt more insignificant than I did in that land made for giants. 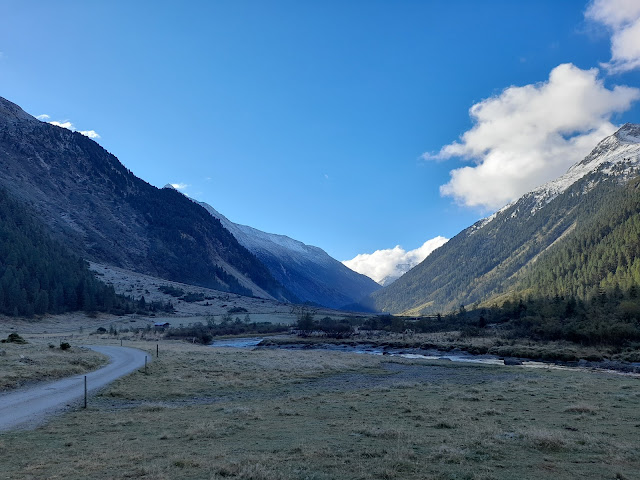 At 9am the thermometer in Udo's pick-up truck showed an outside temperature of  3°c. It was bitterly cold outside the vehicle and with every breath I sent a cloud of condensation skywards. A frost covered the ground of the valley which was still shaded by the mountains and my boots crunched on the icy ground as I followed Udo to the river.  We walked along its banks on the hunt for fish and soon came to a wide pool where we could see a grayling near the tail. It took me a while to spot it because it blended perfectly with the pale grey sands of the riverbed. Udo felt that a dry fly at the end of my 7½ ft 3 weight rod might tempt the fish to rise but when that failed he passed me a 9 ft rod with a heavy nymph on the point and another on the dropper. The grayling continued to ignore my flies but eventually another smaller fish, previously unseen, raced forward from the far bank and snatched the dropper from the path of the grayling. It was a brook trout and the first I have caught in Europe. 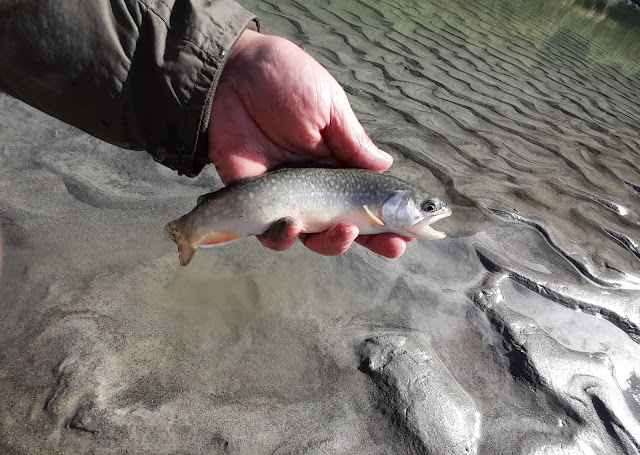 There were several much larger trout and grayling milling around the deep water at the head of the same pool, but they were temperamental and ignored my flies. We gave up on them and I cast my duo of nymphs to a fish lying in the shallower water above the drop-off to the deep pool. That fish was also unmoved so I let my flies drift into the deep pool and sink into its murky green depths. My indicator was dragged beneath the surface as the flies plunged downwards but I spotted a barely perceptible shift and was pleased when the carbon in my grip came to life. A grayling of around 16 inches long had taken my fly and as it zigzagged in the pool a much larger brown trout shadowed it. Udo was readying my camera when the grayling flopped out of my hands and darted back to the sanctuary of the deep water. 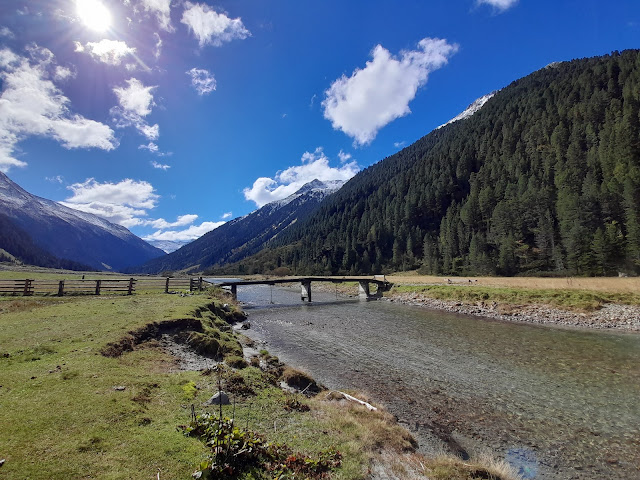 By now the sun had crested the tall peaks and I began to feel a lot warmer, even though a persistently strong wind had picked up since our arrival and blew south - up the valley. The fish were evidently spooky, and their behaviour made a lot of sense when Udo said that the Krimmler Ache is fished by 10 anglers every day, the maximum limit. It's a popular venue. Udo also mentioned that with the onset of winter the trout were beginning to shoal and were perhaps a little distracted. Ted Leeson in 'The Habit of Rivers' described so well the gravity of rivers outside the winter months, when life is drawn to their waters in a time of bounty, and their centrifugal force in winter, when life is repelled. I could feel the transition occurring.

With the sun's growing warmth the fish became a little more carefree and some were tempted by Udo's CDC dry flies. They rose ever so slowly in the water to my fly, a test of my nerves, but the majority still turned away at the last second and a few even ventured to bump the fly with their snouts. We struck some success with finer tippet and a smaller CDC pattern. By 2pm I had caught another 5 brook trout and 2 grayling. They were all pale fish in perfect harmony with the clear waters and light sands of the river. 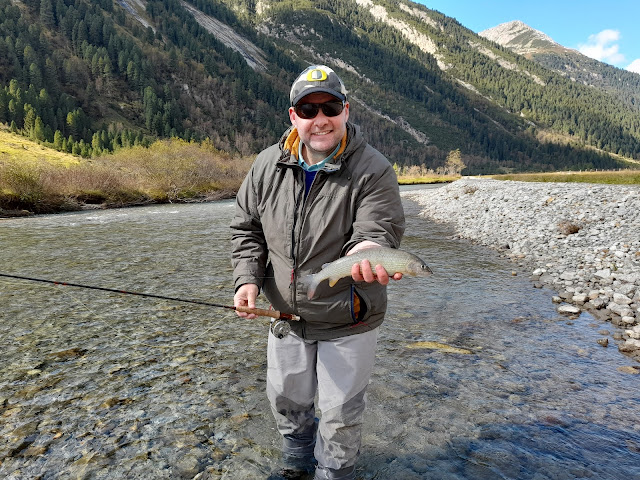 I said to Udo that I'd really like to catch a brown trout because they are the only truly native fish above the falls. He whisked me off in his pick-up truck to a point half a kilometre upstream where rapids gave way to a substantial pool shaded by spruce trees rooted to the far bank. The car trip gave me a chance to eat my lunch - fresh bread rolls made with ham and gherkins - and to down half a litre of lemon flavoured sparkling water. Revitalised, refreshed, I cast my dry fly into the pool and it wasn't long before a fish took it, and when it calmed after an initial melee it revealed itself to be a brown trout. It was the most unusual of its kind I have seen, bleached an off-white like a mullet and with a preponderance of pale orange spots rather than black. Udo said that brown and brook trout tend to keep to different sections of the river. 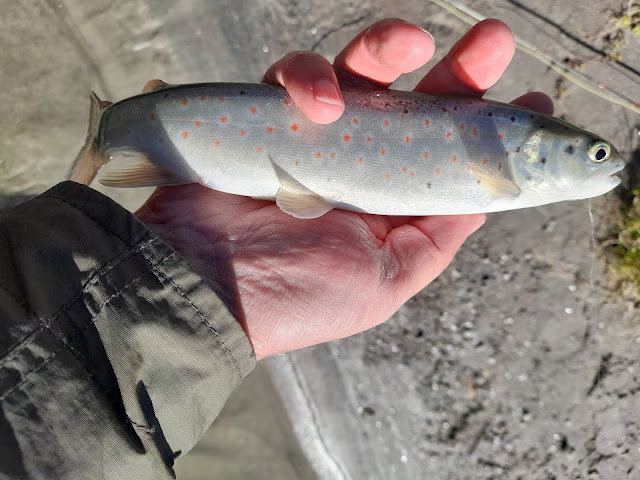 Momentarily after catching the brown trout three Austrian military choppers thundered laboriously down the valley in a convoy. We paused fishing and watched in silence as they sharply banked in turn above our heads and returned up the valley. I had seen the same helicopters at Innsbruck airport when we landed there earlier in the week.

Whilst I walked along the rocks at water level with the nimbleness of a chamois, Udo remained high on the bank on the lookout for fish. He said he could see a large trout in the rapids at the head of the pool. I cast my fly to the spot and the trout came up in a flash and took it. The speed of its rise took me by complete surprise, because every other trout had risen with the restrained tempo of a glacier, and I mistimed the strike. The trout had shown just enough of itself to reveal that it was larger than anything I had caught in the morning. Udo said that the fish had returned to its lie and because I knew that I hadn't pricked it with my hook, I had another chance at it. We rested the fish for a minute as the jingle-jangle of big-fish-nerves began to unsettle the butterflies in my stomach. When I cast my fly to the trout a second time, it came up once again in a flash but I missed the damn thing! Now it imitated the Rock of Gibraltar on the bottom of the river and refused to move to my fly again. 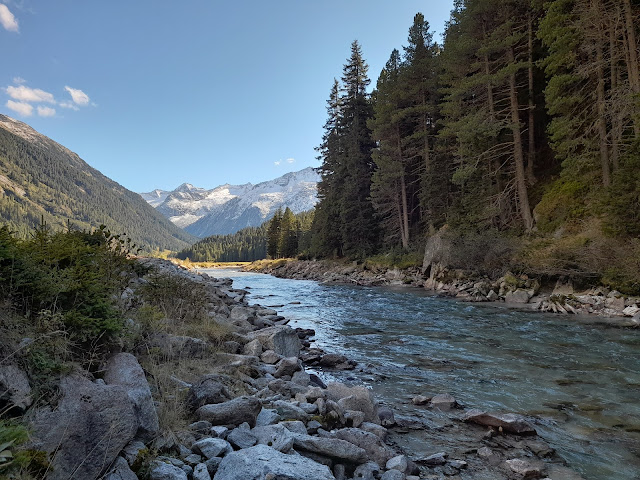 Herds of cattle were left free to roam in the meadows which meant a continuous cacophony of hollow rings, for they all wore bells around their necks. A farmer worked a tractor through the meadows and I marvelled at the tenacity of the few people who existed in this high, cold place. The mountain soil is thin, the weather mostly unfavourable, and life must be rather precarious. I wondered if the people who lived in the quaint wooden huts ever took the beautiful view for granted. 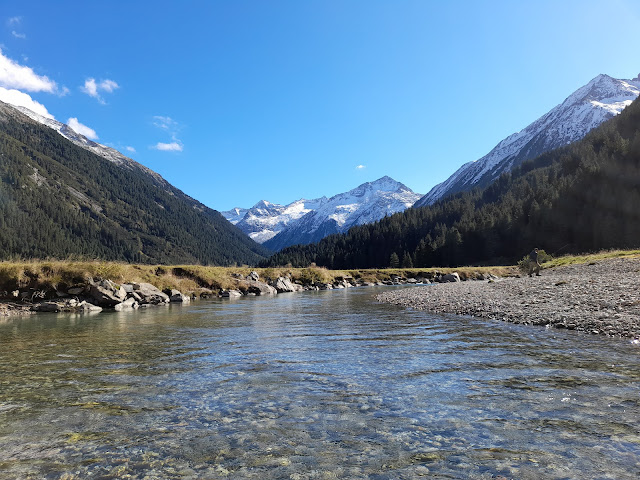 As the afternoon wore on the amount of hikers and cyclists in the valley picked up, and we met several anglers who were all courteous and kept away from the water immediately upstream of us. We typically followed where there were fresh boot prints of anglers in the sand, but because there were so many fish in the water, it didn't seem to matter. I caught another 4 brown trout in the afternoon with a lone brook trout sandwiched in the middle. The browns were all caught with a dry fly whilst the brook trout took a nymph and was followed for a second or two by another enormous brown trout which emerged from beneath a cabinet sized rock. I briefly tried to strip Udo's lone streamer pattern beneath the rock but it was too light and proved futile in the fast current. 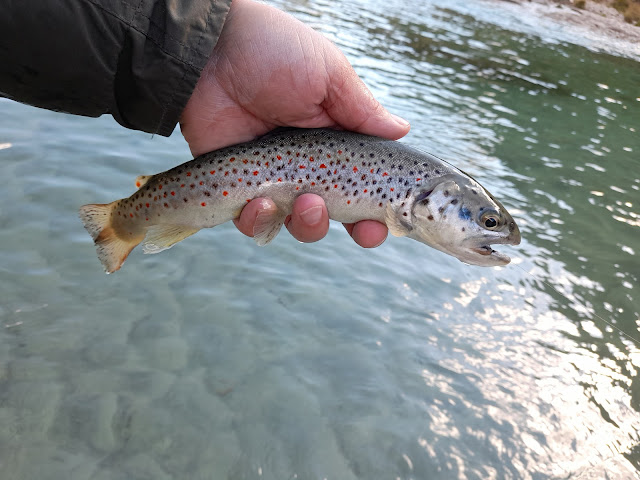 We packed it in at 5pm. I was tired and windburned but thoroughly content with my first experience of fishing in Austria. By then the sun had long since passed beyond the western slopes and I realised just how short the sunlight hours are in the high mountains.