After fishing the magical Krimmler Ache I needed a day's rest, and then took up Udo's advice to fish the Felberbach. This fast flowing alpine brook tumbled down the mountains behind my hotel so I didn't need to travel far. 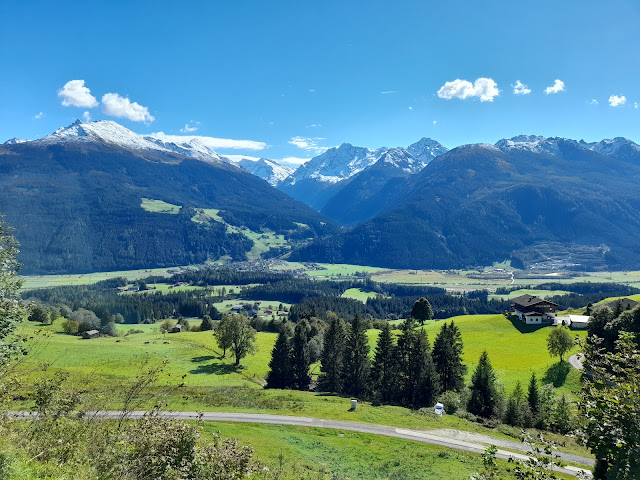 Driving up the valley from the town I saw the river occasionally through trees and buildings. It was a white churn of water in a hurry. When clear of the outskirts of the town we pulled into a layby where I waved goodbye to my family. They'd collect me at 4pm somewhere along the road which followed the river up the valley. The elevation was only a fraction under 1,000m but the terrain steepened towards an impressive range of snow-capped peaks in the far distance.

There was a good pool of water beside the layby, with relatively calm water stretching for a short distance upriver to a waterfall. I slipped into the cold water and was surprised that I couldn't tempt a trout to take either a dry fly or nymph. It wasn't until I reached the frothing pool of the waterfall, where a fine spray of mist hung permanently in the air, that I caught my first trout with a nymph. It was a lively creature around six inches long which took my fly from beside the brick wall of the right bank. 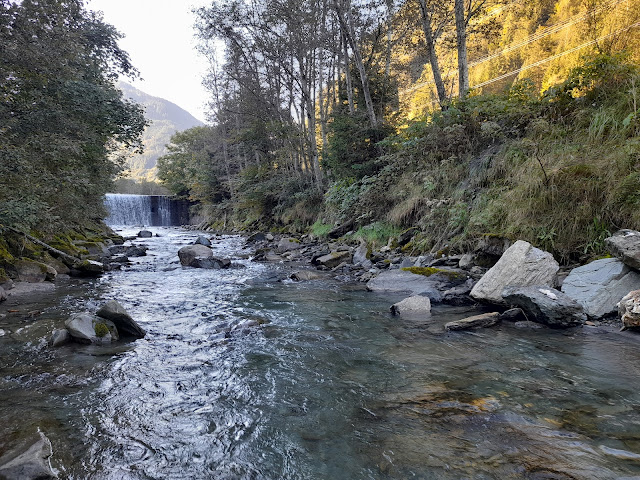 For a brief time above the man-made waterfall the river flowed over unnaturally level ground where the slower, more stable flow created prime trout habitat. I drifted a bushy dry fly down the seams of the main current without any joy and then sent my fly to the left bank where a trickle of water entered from a braid, and a broad snout casually broke the surface and took it in. The hook landed in the strike but pinged free an instant later. How disappointing! I should've waited a second longer and I chastised myself for not uttering "God save the queen" prior to striking, and then the sad realisation that for the first time in my life this invocation should be amended to the masculine. 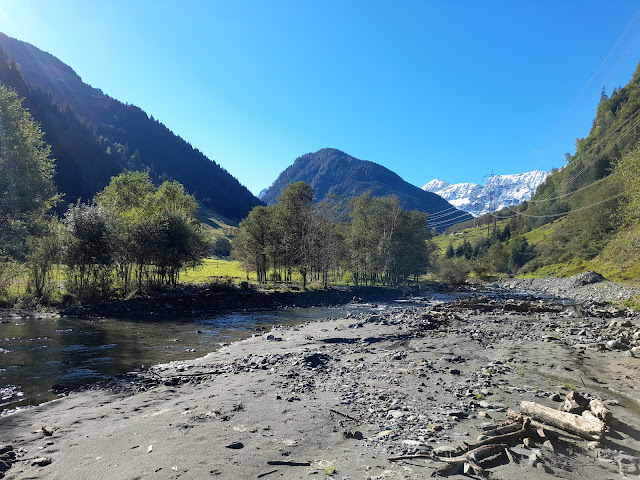 The river quickened thereafter with the increasing incline, forming small pockets of attractive slack water which sparkled in the sunlight. The thunderous sound of the cascade dominated my senses. The dimpled water unbroken by boulders and competing currents of white foam looked to hold much promise, but if there were trout home, they weren't very interested. It was many pockets later before a trout snatched my dry fly as it skirted a boulder in an enticing pool. The take came as a surprise but I managed to set the hook effectively. 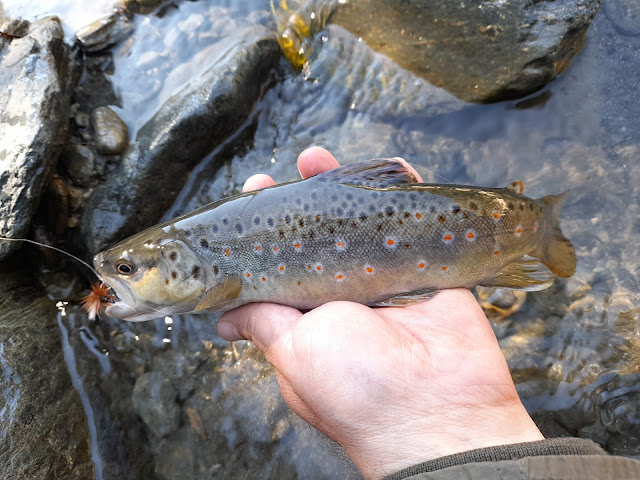 A gravel track on the left bank made the going convenient but suddenly ended where a landslide had scoured away the hillside a season or two before. A huge mound of rocks had been packed into the cavity, which I had to scramble over whilst straining for breath. 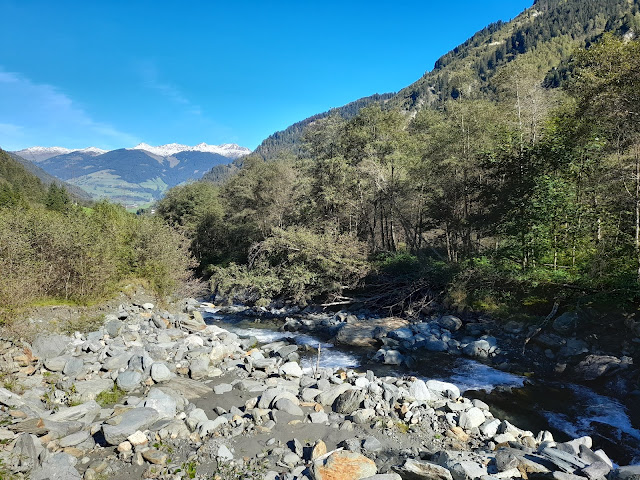 When I came to the confluence of the Felberbach and its tributary, the Amerbach, I followed the latter. Initially there were a series of two or three table sized pools which I fished without success, noting that my hasty approach sent a trout scuttling for cover from one of them.

I discovered another weir a little way upstream. Above the barrier there was a long, deep run of impounded water, without any obvious way to fish it with a fly. A property with a high fence bordered the river on the opposite bank. My side possessed a heavy growth of shrubs upon a steep bank which gave way to water which was far too deep to step into. I sat on a concrete wall atop the weir, my boots dangling high above the water, and ate my lunch as I watched the largest trout I had seen all day taunt me from the blue depths of the pool.

When I saw Udo the next day and told him that I'd tried to walk up the Amerbach, he asked if I'd taken a machete. The vegetation was quite impenetrable. Dense clumps of spruce trees blocked my path and I discovered that their branches held surprisingly pointy barbs. The lowest branches grew at waist height and I had to crawl beneath them in places, taking care with the point of my rod. Where the trees didn't grow there were tall tussocks of razor-edged grasses interspersed with boggy, boot-sucking marshes. More than once I took a tumble on the uneven ground and my waders became covered in mud.  I could handle verdant growth if there was a river to fish but the Amerbach was practically unfishable. A substantial volume of water dropped down a significant gradient in a series of waterfalls and seething rapids. To even attempt to wade into it would've been suicidal. It was a wasted effort.

I couldn't see an end in sight. I could either go back the way I came, picking my way through the trees and bog, or I could diverge from the river and head up the slope to where I could see a row of pylons. I suspected that there must be a maintenance track beneath them. I chose to climb but quickly came to regret my decision because the slope was very steep and one misjudged step might have seen me fall a long way. I made it to the nearest pylon, red-faced, sweating, breathing like a pair of bellows and uncomfortable in my constricting waders. I flopped down on the grass of the track and downed almost all of my remaining water. It's not an experience I'd wish to repeat.

I followed the rough track to the main road where I re-joined the Felberbach and washed my waders clean. With only an hour remaining until my lift arrived I followed the river back downstream to the layby. The downward journey was a lot more forgiving and successful. 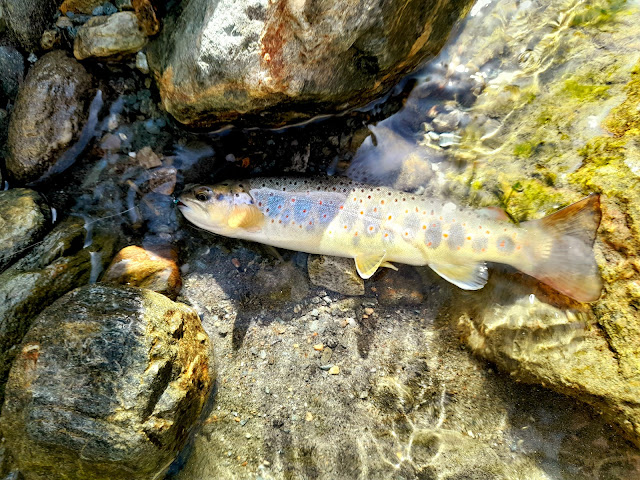 I caught a gorgeous trout from a pool which I had skipped on the way up. The trout took a heavy nymph which I'd bought from the hotel's fly shop, the extra weight indispensable in the fast current. Unusually for a mature fish it possessed the thumb-print markings normally associated with parr. Nearing the layby I caught another little trout immediately above the waterfall and it felt like they had at last woken from a slumber. In keeping with my day on the Krimmler Ache, the fish were noticeably more active in the late afternoon.

I wondered if the large trout that I'd pricked in the morning might be tempted to take another fly. My casts to its lie in the lee of the current were ignored. I switched over to the other side of the main current and struck gleefully when the dipping point of my leader disappeared. The trout on my hook was by some margin the best of the day although I couldn't possibly say if it was the same trout from the morning. 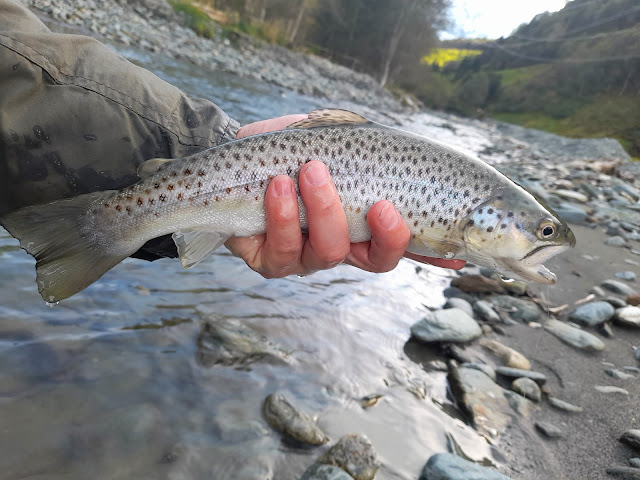 I made it to the layby on time and because the fish were now feeding freely I cajoled my family into letting me have 15 minutes to explore the plunge pool beneath the waterfall. The choppy pool held a mysterious attraction thanks to its opaque water which gave no clue as to the river's depth. There would be several trout in the green depths and some would undoubtedly be large. As my partner and son watched, three trout took my nymph in quick succession, the first and smallest near the tail, and a pair caught from a delightful back eddy where I left my nymph to drift and sink for several seconds. 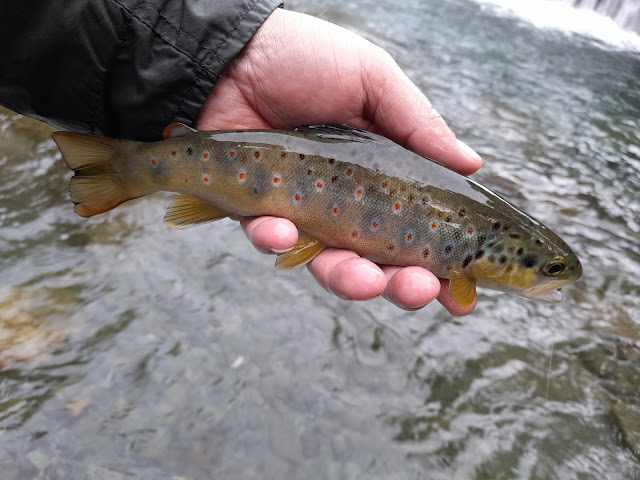 We had a very comfortable stay at the Hotel Bräurup and were sad to leave. Our room was large and comfortable, the staff were very helpful and the food was good. I really enjoyed my first experience of fishing in the Austrian Alps, not just because of the stunningly beautiful mountain scenery but also because the fishing was very unlike what I've grown accustomed to at home. The gradient of the land and speed of the current made line control (in the Krimmler Ache) and fly depth (in the Felberbach) prominent factors. I left with a pleasing sense that I'd worked hard for every fish. 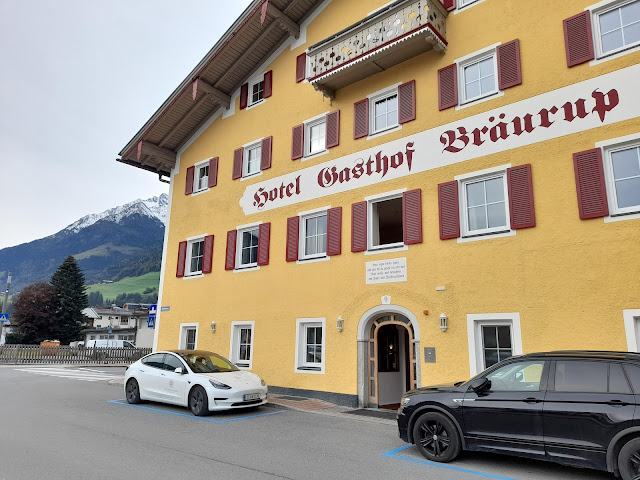