My final day's fishing in Dorset provided an excellent conclusion to an absorbing encounter with the River Frome. My host, John Aplin, suggested that instead of another day on his Home beat, I should fish the Bhompston Farm beat for a change of scenery.  The Bhompston water is normally the preserve of a small syndicate and runs to over a mile of the Frome, a field or two away from our accommodation at the Dairy House. I leapt at the opportunity to try somewhere new.

Thursday initially dawned clear and still and my hopes were raised for a decent hatch of olives and carefree casting, but by 10 a.m. south westerly gales propelled low, fluffy clouds at a decent speed through the skies of the exposed Frome valley. It was a mercurial day, when one minute's sunlit warmth quickly turned to another minute's clouded shade, the sort of day when you um and ah about whether to wear a fleece jacket. 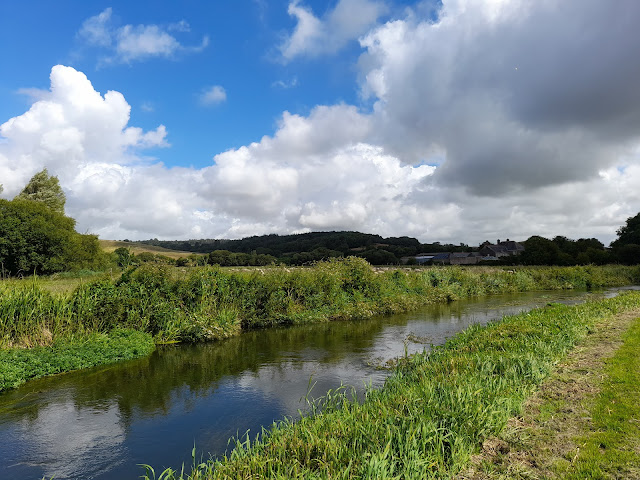 I waded into the tail of a deep weir pool near the bottom of the beat, shown as 'Tilting Weir' on my map. Where the water spilled over the obstruction it chopped and frothed and looked very promising. Somewhat surprisingly nothing was brought to my nymph.

I walked upstream for some distance, pausing to watch the water as I went but seeing no fish between the substantial weed growths. Here the river possessed a very different character to the Home beat, funnelled by a margin of reeds and mostly too deep to wade, best approached from the bank with a long-handled landing net (which I didn't carry). I enjoyed the scenery and solitude along the way nonetheless. 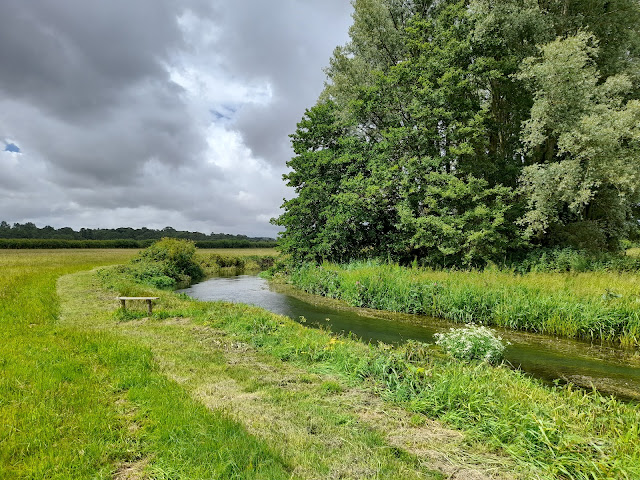 The river gradually became less weeded as I went, and I became more interested in the water. In a particularly gusty spell of wind I made use of a wooden bench where the river curved around a tall stand of alder and other trees and ate slices of fruit loaf for brunch. I was surprised to see a steady stream of olive duns drifting down the current and even more surprised when they went completely untouched by the fish. 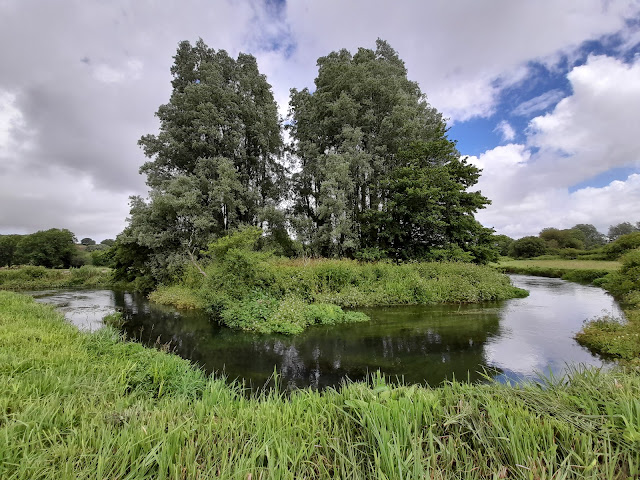 With my stomach full I continued my walk but froze between steps after only 5 metres, where the bend in the river was most acute and the water deepened considerably. A movement on the riverbed had caught my eye. As I squinted through the glare and wind rippled surface a slowly swishing tail materialised, and then a complete trout. The fish looked large and my hopes and adrenalin shot through the roof. On to my tippet I tied a size 16 pheasant tail nymph with a tungsten bead, which I thought would represent the natural olive nymphs which must be active in the depths.

The persistent gales initially made it hard to land the fly in the trout's path, but after five or six drifts, the trout moved slightly to its left and I struck tentatively. The hook-up was successful and I frantically stripped in my line in an attempt to keep the stunned trout in the deep pool, away from the weeds downstream. The trout, however, dictated its own terms by dragging me downriver for 25 metres, as I desperately yanked it away from the verdant clumps of aquatic growth and held my rod high to keep the line between me and the fish from catching the reeds and bankside plants. When the fish tired, it came towards my bank when my leader became snared in the umbel of a white flowering plant which grew in the watery margin. Disaster approached. I really should've carried a long-handled net, but as I didn't have one, I decided to step into the river to net the fish and risk some water pouring into my waders (this fish was worth it, and visions of the scene where Brad Pitt does something similar in 'A River Runs Through It' flashed though my mind). I sat down on the lip of the bank and edged into the water, but when my right leg hadn't hit the bottom by the time the water was approaching my chest I rapidly changed my mind and lunged back on to the bank. Nothing for it, I reached out for my leader with my hand and dragged the trout close to the bank where, with much relief, I could reach out and net it with my other hand!

At around 17 inches long, this muscular, somewhat mean looking, kype showing cock fish was a trout to do my trip to Dorset justice. 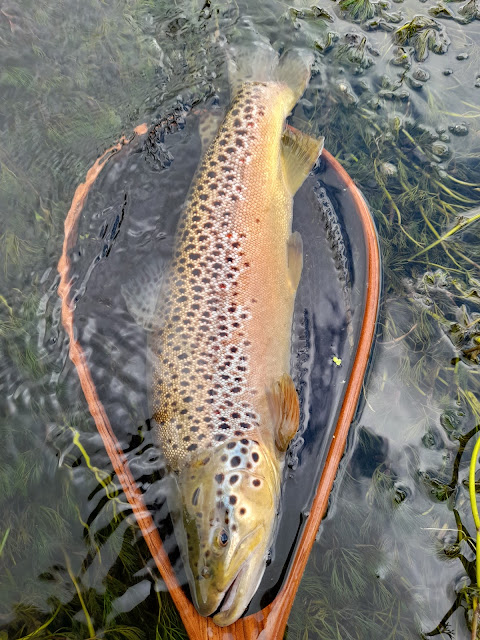 I could've gone home after that fish. I walked upriver a little distractedly afterwards. I paused to watch sheep being dipped by a farm hand who must have been a sailor in a previous job, the way he spoke to the sheep. Later I paused to watch what I think was a sparrowhawk (or possibly a goshawk) wheeling and twisting over the treetops, its slender wings and long rectangular tail quite different to the buzzards and kites I normally see. Even later I had my best sighting yet of a kingfisher. My attention was drawn to a splash in the water ahead and at first I thought a trout had risen, but then a turquoise dart erupted from the water and flew in my direction to perch upon a bare tree branch growing about a metre over the river. As I watched the bird, utterly mesmerised, I was lucky to see it dive into the river a second time from its perch. I was a little too far away to see if it emerged with a fish before it flew off through the trees. 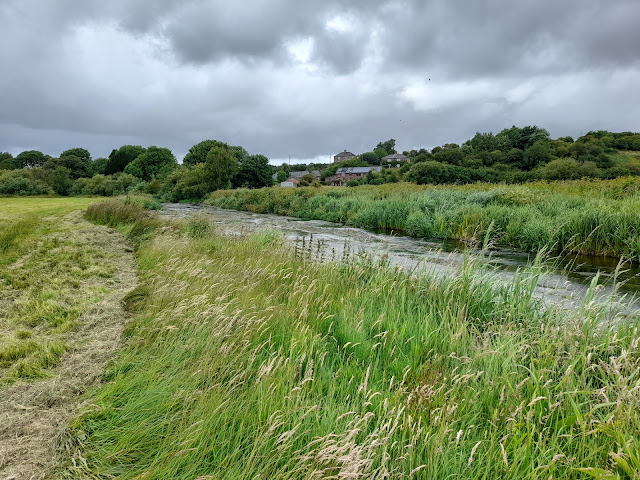 The water nearer the top of the beat, in a section known as the Gardener's Beat, was excellent and in the early afternoon I became serious about fishing again, catching a lively trout of 10 inches from a riffle with a beadhead Hare's ear, and hooking three more with the same fly but sadly losing them.

At the junction of two branches of the Frome an enormous pool yielded a stunning grayling to conclude my day. The Frome really is a fabulous place to catch large grayling, and having set the British record on three occasions in the past two decades, perhaps the best venue in all of Britain. Had it not been for my trophy grayling caught mere days before, this fish would certainly have been my best. 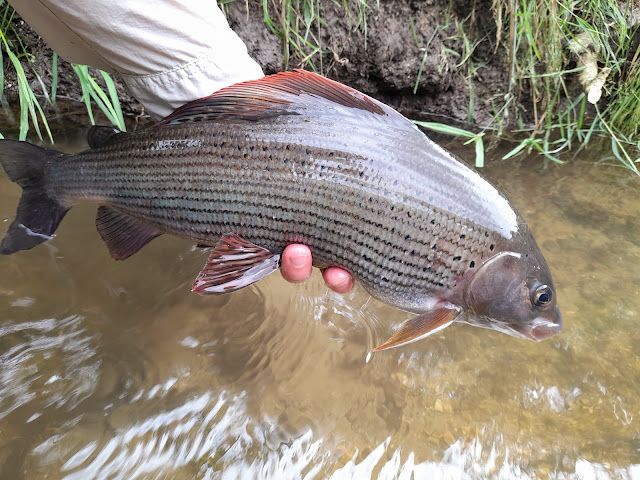 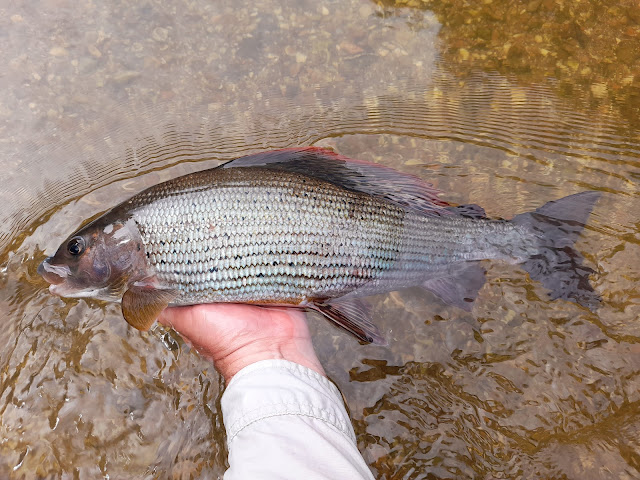 I had a lift waiting at the road bridge at the upstream limit of the beat so I hurried past the final, excellent looking water without wetting a fly. A good sized trout rose 20 metres downstream of the bridge but I was far too content to consider troubling it.

Dorset is an amazingly beautiful county, and my encounter with the Frome ranks as one of my most enjoyable with a chalkstream. With fishing out of the way, I spent the rest of the week exploring the county's rugged, windswept coastline with my family. The coast at Durdle Door and adjacent Lulworth Cove is probably the most attractive part of England that I have yet seen. What a wonderful holiday!