I was finished with my fishing business in the north east of Tasmania and drove to the town of Deloraine, in the north of the island, which would serve as my third and final base. Along the way I stopped at Launceston to stock up on tippet, flies and food. I was amazed to find boerewors (a traditional South African sausage) in a Cole's Supermarket in the town, and snapped up a pack. It was nice to take a break from fishing for a day, connect to wifi, exchange Whatsapp messages with family, and catch up on world events, even if I was disappointed to discover that the Seahawks had narrowly lost to the Patriots in the Superbowl a few days earlier.

Deloraine is 50km west of Launceston, and I found a campground in the town on the banks of the Meander River. I 'barbied' the boerewors on a gas griddle pan at the campground and ate it in fresh white bread rolls with tomato sauce (as one would at any braai in South Africa). It was a nice reminder of home, even if the sausage didn't taste anything like it should!

After lunch I went on a reconnaissance of the Meander River. Downstream of the town the river slows as the valley widens into lowland flats, becoming a classic meadow river, where French's book suggested the fishing was perhaps a little more prized and popular. The river looked far more to my liking upstream of the town, where it was more of a boisterous freestone river, and I found a promising access point to explore in the morning.

At 10pm, just as I was about to nod off in my tent, I could hear the gulping splashes of trout rising in the Meander.

I woke up early, keen to secure the access point I had seen the day before. The day's rest had done me a world of good and I was excited to go fishing. The campground was chock-a-block, so I got up and left, and made coffee in the town beside the still closed visitor centre, where I could stretch out a bit more and hopefully connect to the centre's wifi, but it wasn't yet switched on.

With coffee brewed, I left the town and shock of horrors a car was already parked at the bridge access point I had scouted the day before. It was 7.36am! A rainbow trout sticker on the car left no doubt as to the absent driver's motives. I parked my car and walked to the bridge and could see someone spin fishing in the river. I was initially disappointed, because it looked a prime spot, but I soon discovered that the road followed the river closely for a way further. I drove on about a kilometre before stopping at a place where I could approach the river conveniently. 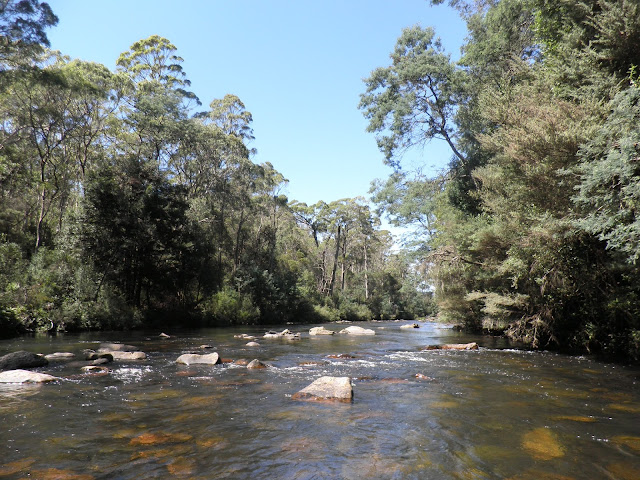 Here the Meander was fairly wide and fast-flowing in a rough and tumble, boulder strewn sense. The damming of the river at Lake Huntsman some way upstream has created a 'tailwater' fishery with year round cool and consistently flowing water. I liked the look of the Meander straight away. There was plenty of pocket water to target and several smooth-flowing reaches added a tantalising variety.

The morning air had a cold edge to it. A brisk downstream wind added to the chill. The river was shaded by tall trees which grew to the water's edge, and the sun took a while to crest the tree tops and filter through to the water. It was only when the sun had fully struck the river that a 14" brown trout obliged by taking my dry fly. 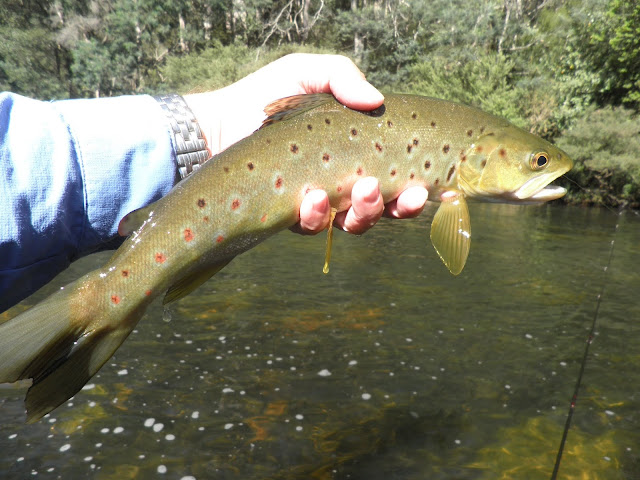 The Meander was quite possibly the most slippery river I had ever waded. Its smooth rocks were coated with algae, lending the river a green tint. I endured four baptismal dunkings - on each occasion both of my legs lost contact with the bottom of the river and I took a plunge. I ended the day pretty wet.

I caught trout at fairly long intervals in the day, seven in total. All were enticed by a dry fly. The parachute Adams, the workhouse of my fly box on this trip, accounted for three, and a Royal Wulff and crimson Klinkhåmer two apiece. The second trout was also 14" and the fifth was 16". It seemed from my small sample that the Meander's trout carried a good average size compared to the other Tasmanian rivers I had fished. 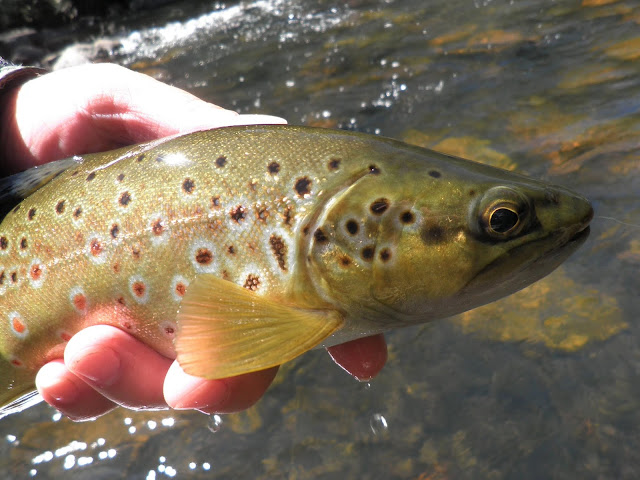 The fifth trout was the standout. I made a long cast to the far bank to drift a parachute Adams through a narrow side current. It was a likely looking run, and within a jiffy a trout snatched my fly. The 16" trout was much larger than I had expected to catch from such a thin slip of water. When I waded past its lie, there was a deep-fryer sized depression in the riverbed, which explained it. 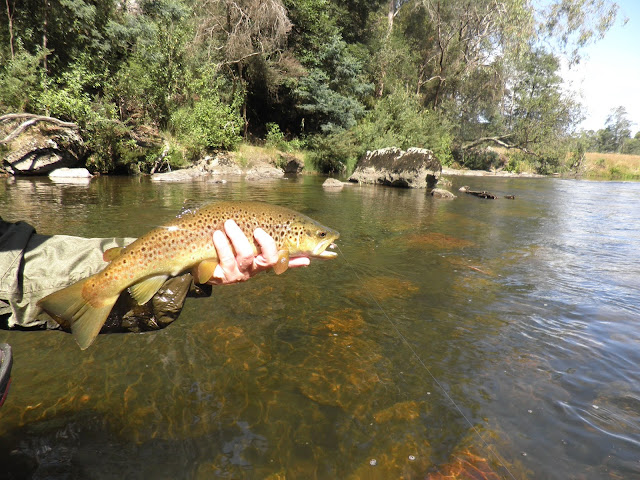 Without exception every trout I caught displayed the same fascinating behaviour when hooked. They simply gave up at first, and let themselves be dragged to an arm's length away from me, and only then would all hell break loose. I was even able to reach out and handle a few of them, as if to remove the hook, but this would set them off, fighting for freedom with an exaggerated purpose. It was a strange uniform behaviour, unprecedented in my experience.

I had a lot of fun fishing the Meander even though I felt the fishing never really got going. I wondered if some unknown variable had held the trout back from truly committing. Weather conditions are always a prime suspect. I have since seen that the 2019 World Fly Fishing Championships were held in Tasmania, and the Meander was one of two rivers chosen for the event. Scanning through the results from the Meander, my effort of seven trout and best of 16" actually looks very respectable!

I was hungry on the drive back to my campground, so I stopped and bought a $10 footlong from the town's Subway. I generally like to try new items on a restaurant's menu, except at Subway where I have a standard order: the Italian BMT, with cheese, tomato, red onion, lettuce, jalapenos and olives, on toasted hearty Italian bread, with south west (chipotle) sauce. It's a delicious combination. Except this time, when I was asked which sauce I'd like, I panicked and said honey mustard. It ruined my first takeaway meal in weeks!
Next: Mersey River
Previous: South Esk River
Labels: Australia