The River Loddon is a chalkstream which rises in the town of Basingstoke and flows north for 28 miles until it joins the Thames. I discovered the Loddon in 2019 when I visited the Barton Mill pub on its banks, and delighted in watching a trout from a table in the beer garden. I had visited family and friends in the town for a couple of years by then, blissfully unaware that a chalkstream sprang to life from within its folds. After a little digging I came across the secretive Gresham Angling Society, and then later, quite fortuitously, an obliging member of the club who was happy to host me as his guest. The club controls fishing on a generous 8 miles of the Loddon and its tributary the Lyde.

Given the unsettled weather of June, this trip had already been postponed twice. Third time lucky as the forecast predicted the hottest day of the year yet. My host, Alex, suggested we meet at 11am and gave me directions to an obscure farm track down to the river. We parked next to a shallow ford where the river looked fantastic. The clear water hurriedly flowed over ranunculus and bright gravels, the perfect picture of a chalkstream in miniature.

As we walked downstream, Alex mentioned that the club stocks brown trout, but mostly at a point some way downstream where the banks are clearer and the members who prefer to fish for them congregate. We'd encounter only wild trout in this part of the club's water, Alex assured me. We separated at a narrow pinch point in the river, where the water flowed out of a stand of trees. Alex's parting words were, "there's sometimes a good fish in there". Beneath the low hanging tree branches, a current of unobstructed water about a foot wide flowed in between a solid growth of ranunculus on either side. The water had an enticing grey tinge, suggesting a good depth. There wasn't very much to aim at, but I somehow managed to thread my fly beneath the trees and into the sweet spot on the third or fourth attempt, and a trout obliged by taking my olive shrimp pattern. I didn't know it yet, but at around 12 inches long, this would be my largest trout from the Loddon. 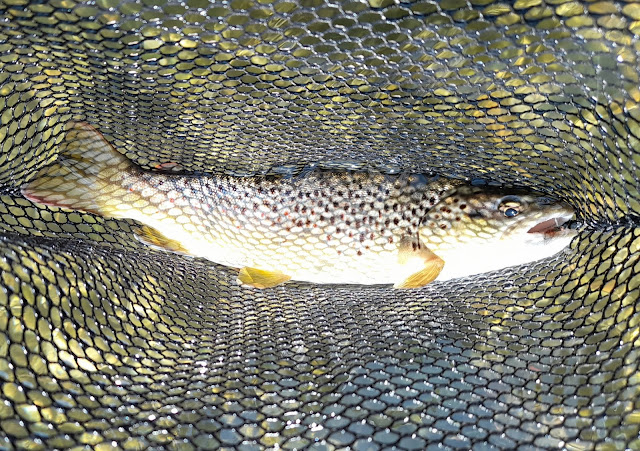 Lush bankside vegetation grew tall in the summer climate, and watercress and reeds flourished in the river's course, confining the summer flows to an even narrower channel, where ranunculus thrived untended. I used a dry fly in this shaded section, aiming the fly for the small gutters of gravel and leafy margins, where the trout were willing to take a well-placed fly. 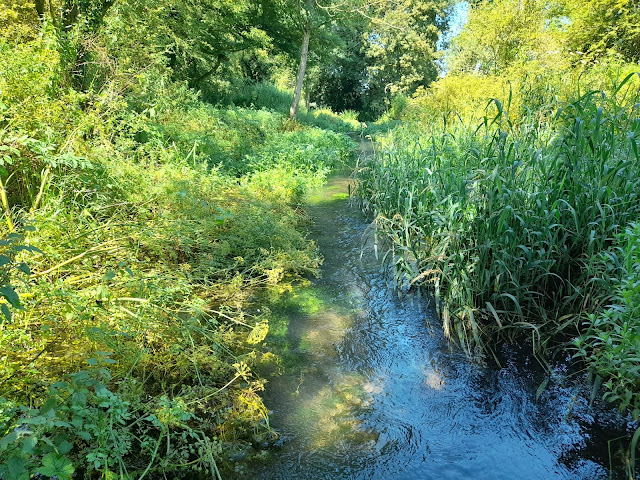 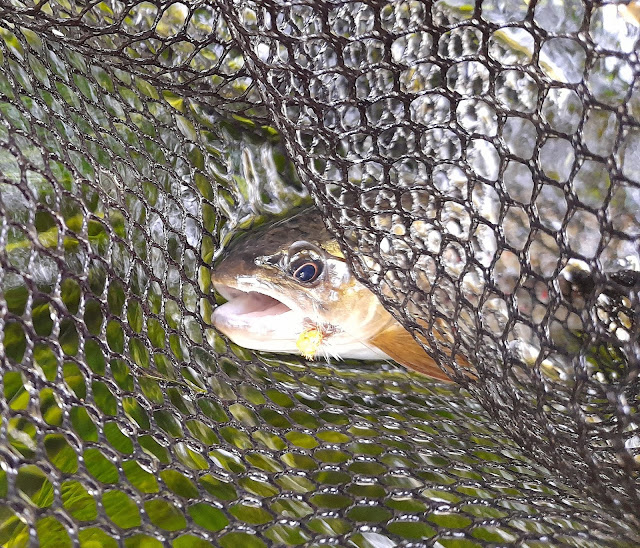 I'd caught 4 trout by the time Alex caught up with me, and had lost a few more which, when hooked, dived into the weeds and made a lucky escape. Among his haul, Alex had taken a brace of 2lb trout with a nymph, which he excitedly said were the largest he had caught from this river. The trout seemed largely unfazed by the oppressively hot air and bright sunlight - tough conditions normally. With guidance from Alex standing on the bank, I cast my fly forward and caught a fifth with a klinkhåmer. We then returned to our vehicles to eat lunch just after 1pm. 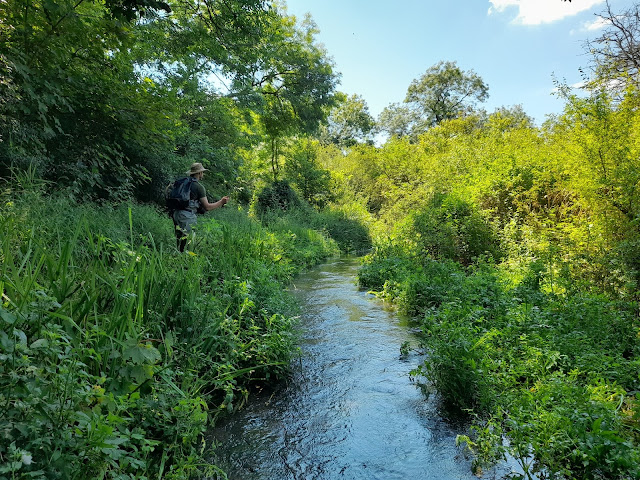 It was baking hot by lunch time and we ate our lunches in the shade of our vehicles' rear doors. We took our time, in no great haste to get back into the sun. By now several teenagers were splashing around in the ford, playing music, and enjoying the cool water.

I had to leave at 3pm, so after lunch I had an hour of fishing time left. I went upstream from the ford, and immediately spotted a sedate rise in the shade of a hawthorn tree on the true left bank. I couldn't see the fish because of the reflection of the sun, but cast my fly in front of the tree and helplessly watched it drag unnaturally past the spot where the trout had risen. I witnessed the torpedo of a large trout dart for the cover of the bank. Damn. I then fished very poorly, and learned that the hardy hawthorn does not relinquish flies very easily. I lost 4 patterns to the trees in quick succession and then heard Alex approach from behind. I looked at my watch and was surprised to see it was 2.45pm. I'd spent far too much time replacing lengths of tippet and flies. Alex had caught two trout downstream of the ford with a nymph. As he wandered off upstream, I tied on a nymph for a last cast or two, and instantly had success when a trout seized it. It was a lovely way to finish the day. 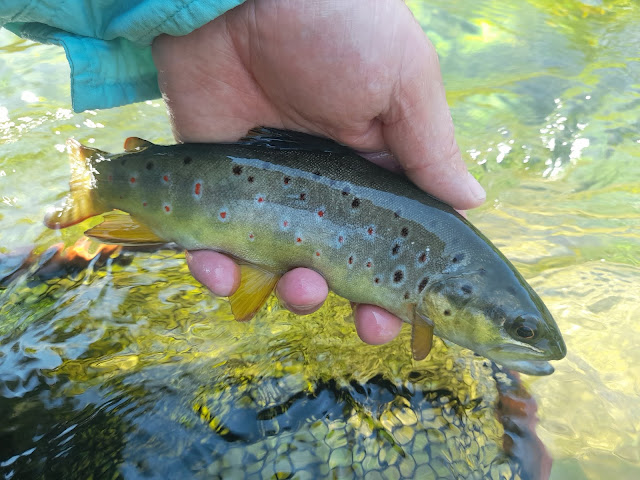 I'm grateful to Alex for hosting me on a very private river. I was impressed by the quality of the water, and was delighted to receive an invitation to return next year to fish the Loddon's tributary, the Lyde. Whilst my fishing time (just under 3 hours) wasn't enough to begin to scratch the surface of this hidden gem of a chalkstream, my car's thermometer showed an outside temperature of 31°c and I was somewhat relieved to drive off in its airconditioned interior.