A diary of my visits to my club's section of river, somewhere in deepest, darkest Sussex.

As I drove to the river just after 7pm, a light rain began to fall on the windshield. A yellow weather warning for an incoming storm was announced over the radio. I paid little heed to the weather, my mind dwelling instead on the jay which had flown into the path of my car. I feared the worst for the poor bird. When I arrived, the car park beside the river was once again empty. As I rigged up my rod and slipped into my waders, the rain started to come down with a little more urgency. 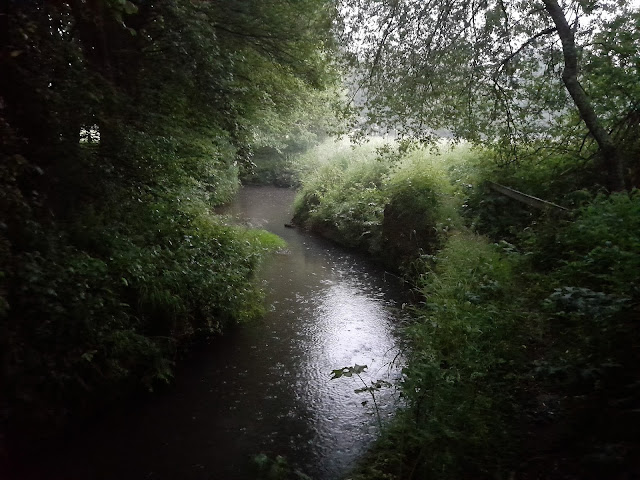 I walked upstream from the road, stopping only to admire a tall stand of pink foxgloves beside the river. The rain hadn't yet dampened the attentions of bumblebees, which busied themselves in the tubes of the flower.

I watched a long, shaded run with interest, because it was here that I had caught a trout on a previous visit and seen another two rise, but nothing stirred in the pool this evening. I carefully eased into the the water and slowly fished my way to the head of the pool without any joy. Other than the drops of rain, the water was deathly still. The leaden cloud cover meant it was eerily dark beneath the trees. Suddenly, there was a loud splash next to me. My instant thought was that someone had thrown a large rock into the pool. The imaginative and more hopeful segment of my brain wondered if an enormous sea trout had leapt from the water. The splash became a continuous commotion and I turned and saw it was a storm drain outflow. I happened to be standing right beside it at the moment it first discharged into the river. It took a few moments for the initial shock of the unexpected sound to subside.

As I moved around a bend in the river, I stepped into a cavernous hole and submerged to my shoulders, despairing at the cold sensation of the river's water spilling over the top of my waders. This trip wasn't going well... and I'd had enough. Completely soaked through, I trudged back to the car park through the now heavy rain. There was another car parked a little way from mine, engine running, and playing loud music. The monotonous thudding of bass had been audible from a distance. I could just make out a young couple in the front of the car through steamed windows. The passenger's window rolled down and a young man asked if I'd had any luck. I shook my head and said it was too wet. "Always an excuse in fishing, hey?" he retorted.

I returned to the river after a month's absence, and what a difference a month of summer's growth had made! Lush stands of bankside nettles, brambles and bracken grew almost to my head.

I decided to fish the lowest section of the club's water for the first time. I have taken to calling this section 'the Oaks', because the river here is a series of tight bends beneath the shade of several tall oak trees which must be many years old. Given the impenetrable growth it was nigh impossible to locate an entry point to the river (where the club has strategically placed ropes and ladders along the steep banks). I eventually located a ladder where some hardy soul had obviously known where to look and had beaten a path through the vegetation. I slipped into the river as quietly as possible, the water considerably lower than it was on the last occasion. Just before me was a left bend in the river which I wanted to use as cover, concealing my approach from any trout around the corner. The water became deeper as I crept forward. With a next tentative step I began to slide downwards in the soft clay of the river's bottom, into a void, and in a heart sinking second realised I was going for another swim! Once more the river's water came spilling over the top of my waders as I floundered. I lunged for a handhold of vegetation growing from the bank, and then dragged myself back to higher ground.

I walked upstream to a section of the river I now call 'the Huts' (two small wooden huts mark its extremities). I have taken a strong liking to the Huts after my initial visits and knew I'd find surer footing there.

Along the way I stopped to admire the preponderance of wild flowers along the river's bank. I recognised red campion, pink foxgloves and the ubiquitous white flowering hogweed, but stopped to take images of purple and yellow flowers I didn't recognise. I later identified them (I think) as common knapweed and greater birdsfoot trefoil. 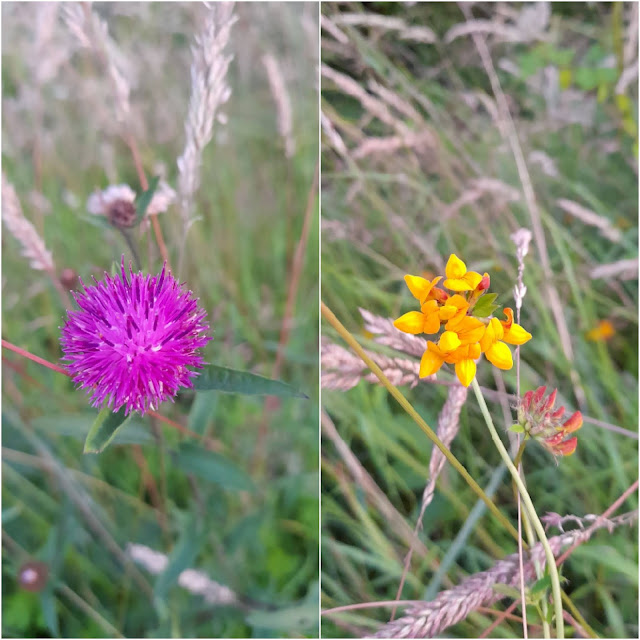 I walked slowly upriver, keeping a lookout for rises. The water was very still, but just before the second hut I looked back downstream and saw a measured rise in a bubble line, where a current emerged from the head of a pool. It looked to be a good fish. The sight set my pulse racing - at last! I backtracked and, seeing no obvious access ladder in the vicinity, slid down the bank on my backside, grabbing fistfuls of grass as I went, until I dropped into the water. I crept up to the pool and then crawled into a casting position on my knees. I cast my dry fly several times into the bubble line without any joy, and then let the fly drift further into the pool, alongside exposed tree roots, where it was snatched by another fish. It was a wild fish, caught from the same place I had caught another wild trout on a previous visit. I wondered if it was the same fish. I've since looked back at the images from that trip, comparing the fingerprints of its spotting, and I think it possibly is the same trout (comparison at the end of this entry). 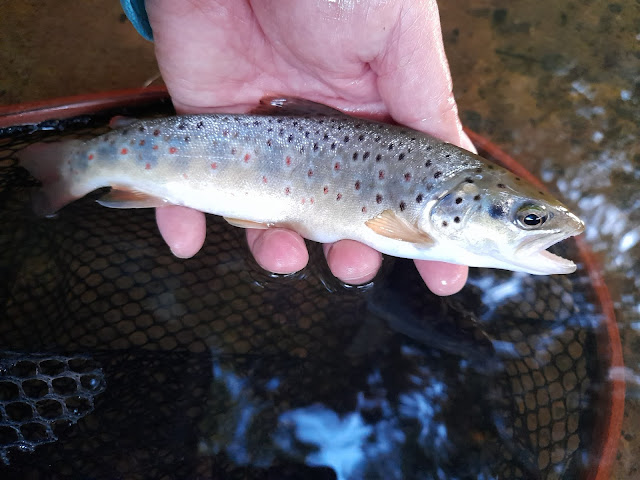 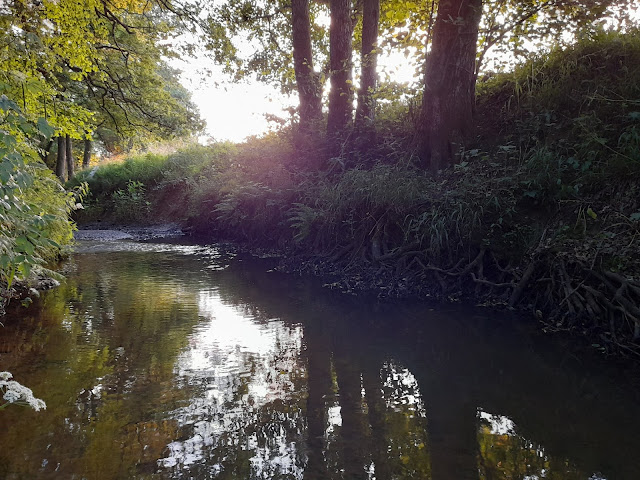 With a fish having graced my net, I was content to bring my fishing to a close for the evening. I wanted to walk up to the very top of the club's water, a section of the river I had yet to see. I walked through the riverside meadows as the sky turned a rose petal pink, pausing to watch a deer in the next field as it nonchalantly grazed the farmer's crop. I noted several promising pools for my next visit, and from one I startled a heron into flight, its wingbeats making barely a sound. I've seen a heron - likely the same one - on every visit to this river.

A repeat dunking and possibly a repeat trout in consecutive visits. I enjoyed the second visit far more than the first!