I've mentioned the Sussex Weald before and how it isn't conducive to ideal trout habitat. Rivers in the Weald flow over clay and soft sand and their sediment gives the water a brown tinge. They are sinuous threads, flowing unhurriedly, with high banks cut through time. If you blink, you could miss them in the landscape.

I have been searching high and low for trout close to where I live in the Weald. I had almost given up, but then I struck gold. It wasn't easy. The club has no website or online presence but with some Poirot-esque investigation I reached the right people and am now the club's newest member. It dawned on me that I haven't been a member of a fishing club for 22 years. It feels rather nice to have a new fishing 'home' again.

I made my first visit with a fly rod yesterday evening. I left home at 7pm, fished for 90 minutes, and was home just before dark. It felt wondrous to fish long into the cool evening for the first time in ages. The intensity of the visit - done and dusted in a heartbeat - was quite novel and refreshing too. I'm accustomed to travelling much greater distances to go fishing, spending time on the road that only lends itself to day-long campaigns. I'm usually in the car travelling home by 6.30pm so I have little prior experience of fishing at dusk.

Quite pleasingly I seemed to have the river to myself. From my vantage high on the bank I spotted a fish rising in only the second pool from the car park. Access to the water is difficult and achieved by clambering down and up the riverbanks with the aid of strategically placed ropes and ladders. I found a rope in the grass, shinnied down the bank, and entered the water. I had temporarily lost sight of the fish around a near 90° bend, which I was using to mask my approach. The water was deep and as I manoeuvred into a position to launch a cast, water nearly billowed over the top of my chest waders. I glacially crept around the bend. Good, the trout was still rising. I cast a parachute Adams into the bubble line and the trout gently sipped in the fly. I struck... into nothing! Had the trout been spooked? I couldn't tell, so I cast the fly into the same place. Once more, a boil of water engulfed the fly and I hung on a fraction longer before striking. The trout was feisty and once netted, I noticed it was a gorgeous shade of golden yellow with a profusion of cherry red spots. A perfect wild specimen. I'd be a happy man to catch trout such as this for the rest of my time. It was a very propitious start to my new union with the club. 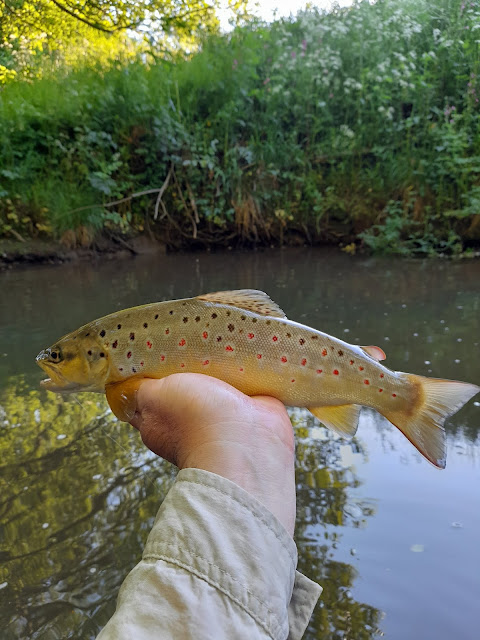 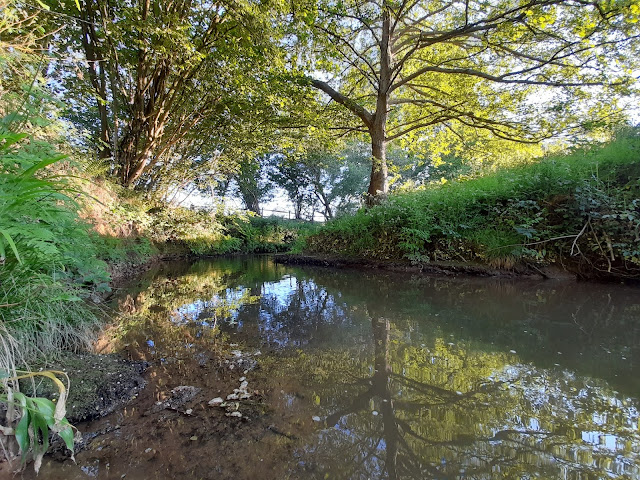 I exited the pool in ungainly fashion, pulling myself up the bank by grabbing fistfuls of grass. A little way upriver I came to an artificial weir and in the backed-up flow above the barrier, I witnessed a trout rising against the true right bank. Down the bank I slid, then into the water, cursing the bow waves I was sending upstream. When the waves dispersed the trout rose again, unperturbed, and then it rose to my parachute Adams. I fluffed the strike once again. I was using my 6' Hardy Flyweight rod after a long hiatus, and wasn't quite in tune with its action yet. The trout continued feeding so I cast to it once more, muttering under my breath to remember to praise the Queen if it took my fly. Up it came, and this time I set the hook. It was also a lively trout. In the furious throes of its quest for freedom its tail splashed water into my eyes as I went to net it. 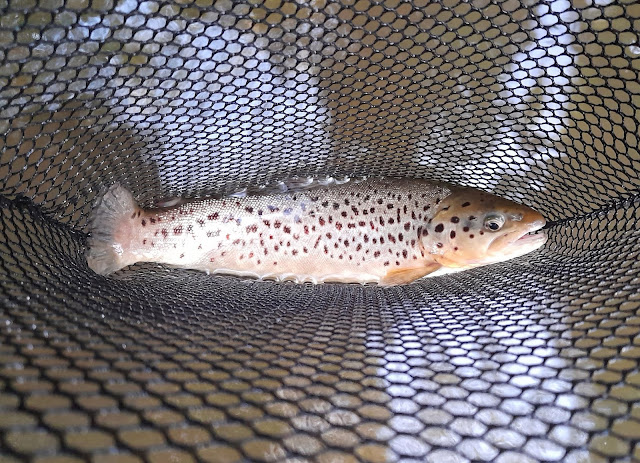 The light was steadily fading and the air growing cool. I was treated to a final flourish of birdsong before roosting. I thought I saw a rise, but it was something dropped by a squirrel in the branches of a tree above the water. I watched it cross to a tree on the opposite bank and then drink water from the river's edge, before heading back over the river again. I located two other rising fish, but my seemingly perfect casts were received poorly and both fish never rose again. 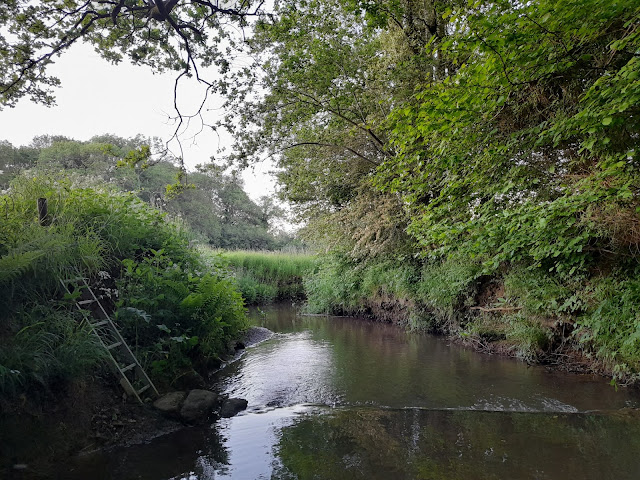 As I removed my waders in the carpark, I heard a trout rise in the pool downstream of the road. I looked up to see the dissipating rings of its rise. We may meet in future. In that moment, there was something really satisfying in knowing that trout rise in a river so near to my home. And I had found them.