The River Itchen is formed at the confluence of the River Alre and Cheriton Brook, just south of the pretty town of Alresford. I recently had an enjoyable day fishing the short section of the Alre just before it becomes the Itchen proper. It felt somewhat poignant that I was fishing at the place where one of the greatest trout fishing rivers in the world begins its journey to the sea.

The Alre is a river small in size and like any chalkstream it runs gin clear. The beat I fished is described as being 'traditionally managed' which, I came to learn, is a euphemism for being left to nature's devices. There is an allure in such wild, unkempt rivers but I was left in no doubt as to the enormity of the challenge that lay ahead. The limpid water meant its wily resident trout and grayling would spot me from a mile away. I would have to wade upriver with the stealth and restraint of a heron. I'd need to use a long leader too. The bankside vegetation meant casting would be tricky in places, especially given a stiff cross wind. I was also a little tired and sore from the full day spent fishing the Itchen the day before. I could sense I might not perform at an optimum level. It was a little depressing to think about it. My mind was willing even if my back, shoulders and legs weren't! 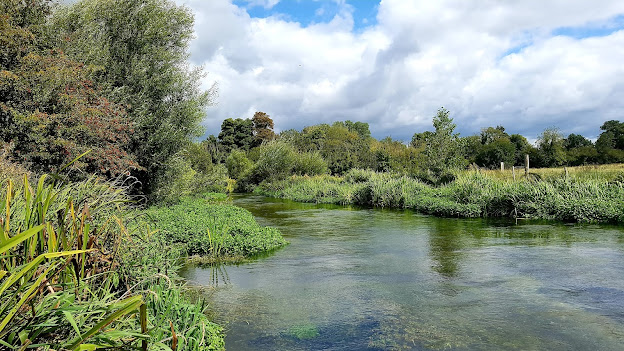 My instincts weren't proven wrong. I waded gingerly into the river at 9.30 a.m. and three hours later I had nothing to show for my effort. The fish were disturbed by my cumbersome presence and fled in panic. It's easy to spot a spooked fish, when it's all too late, and I kicked myself every time. Still, the sun radiated warmth whenever it wasn't behind the clouds, and I revelled in the calm green space around me. My partner came to join me for a picnic lunch next to the river. She appeared to be my lucky charm because a fish took my nymph as she watched, and it revealed itself to be a fine grayling. My partner has little interest in angling, but I must have seemed a very competent angler to her! 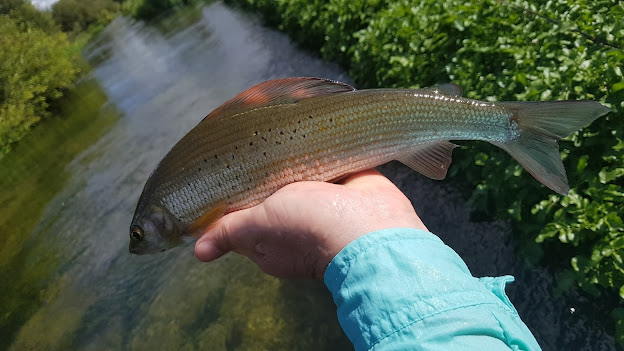 Where there is one grayling, there are usually several more. While my partner went to set up the picnic I caught two more grayling. The second was the best of the trio, and hearing the commotion my partner came to watch and commented on how much my little Orvis Superfine rod was bending in the fight. Having never seen it in action before, she was concerned it would break! The grayling in question put up a dogged fight so typical of this species, hugging the depths and trying to flee into the weeds. It measured around 15 inches in the net and was tinged in shades of yellow and gold. When I came to release it, its dorsal fin flared in the water and revealed a dazzling pattern of scarlet red and plum purple. 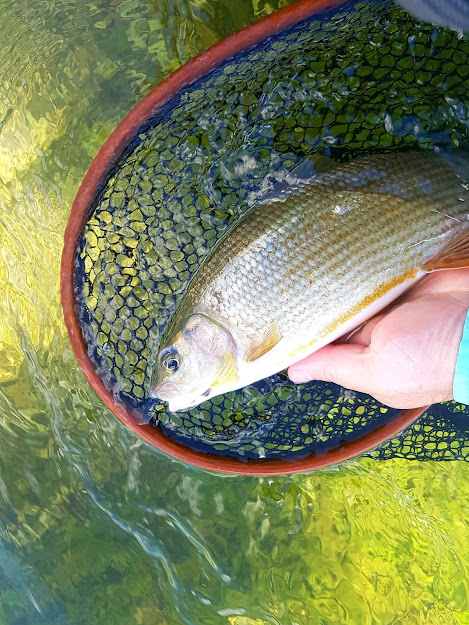 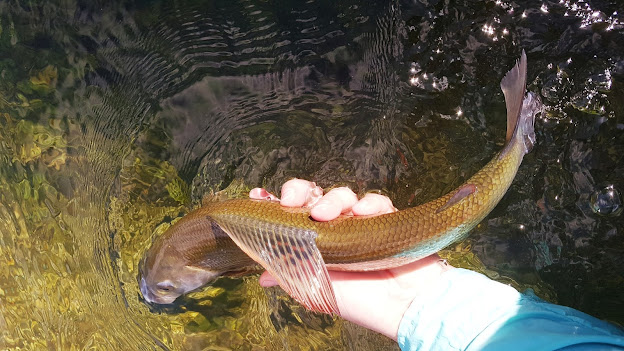 After a sandwich, I waded back into the river with a renewed energy and confidence. I was hopeful that I would pick up where I left off, but it wasn't to be. In the next two hours I hardly had a sniff. I approached the top of the beat at around 3 p.m. when I had agreed to meet my partner for a trip into town. As she came down to the river bank to meet me I hooked another grayling! This was another good fish of around 14 or 15 inches. I joked that she should come along on all my fishing trips but she would have none of it, of course. 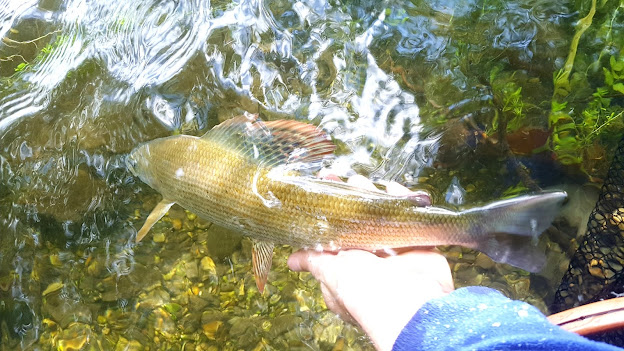 Just as before, I caught two more grayling in quick succession after the first. The successful fly was again my self tied olive and pink blend shrimp. I hope to develop my fly tying in the coming months, and catching fish on my own pattern was a real boost. 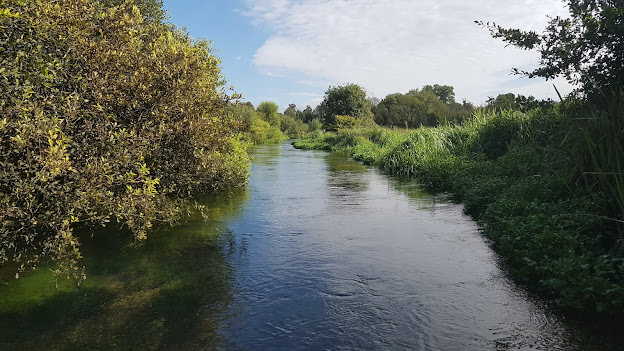 I was a little disappointed to have reached the upper limit of the beat without having caught a trout. Grayling are a fabulous quarry on the fly but the pursuit of trout provides me with a little extra satisfaction. It was then that I spotted a trout in the shallow margins of the far bank. I cast my shrimp just ahead of it. The trout moved fractionally to its left and I struck, elated when I saw the fish recoil in surprise as the hook found a solid purchase. I was overjoyed when it slipped into my net because I take great pleasure in catching a first trout from a new river. It had a silvery sheen, and completely lacked the cherry red spots so prevalent in the trout I had caught not a mile downstream in the upper Itchen the day before. 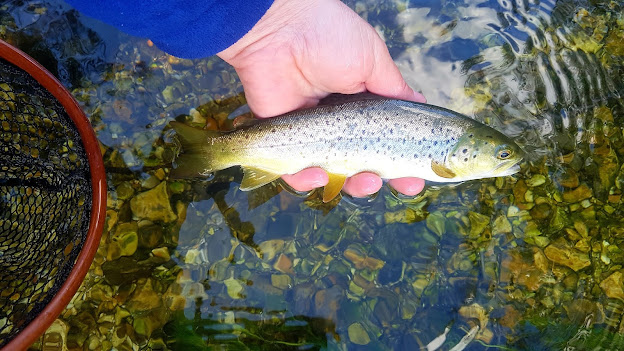 It was now just after 3 pm. I changed into dry clothes and we drove into the town of Alresford to look around. The old part of the town was about a mile upstream from my beat, where an historic fulling mill spans the river. A mill has been at this site since the 14th Century, harnessing the water's energy to finish woollen cloth. It has now been converted into a charming home. There were some very large trout in the water beneath the mill, completely habituated to the presence of man. Fish pellets for sale next to the river explained their bold behaviour. 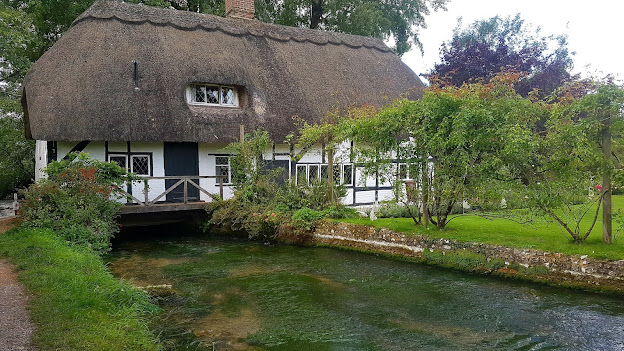 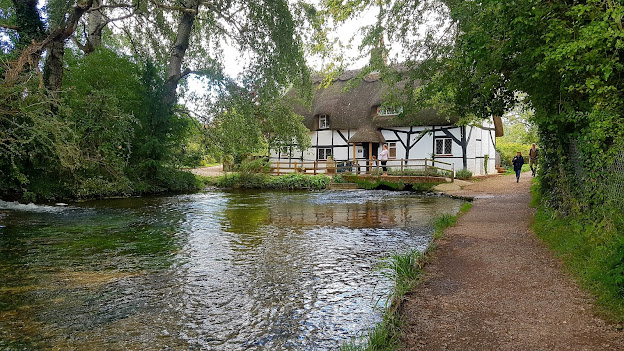 As with the Itchen the day before, very few fish had risen during the day. I hoped that by going back to the river in the evening, I might encounter a rise. I slipped back into the water at the very downstream limit of the beat for the second time, at 5.30 p.m. I would have two and half hours to fish until nightfall and I realised I almost never have the luxury of fishing until dark because I normally have a long drive home. It made a nice change to continue fishing as the sky turned pink and the sun set. A little surprisingly there was no rise, so I continued to fish with the nymph. It wasn't long before I caught another silvery trout of ten inches and then lost a very good trout. The latter leapt out of the water when hooked, revealing its proportions, and I was momentarily stunned. It was short lived. As soon as the trout clattered back into the water, the hook dislodged and the line went limp. I won't repeat what was said under my breath.

I spotted a large grayling in about four feet of water which was relatively deep for this stream. It was an easy spot because it stood out against the bright gravels on the stream bed and because it frequently moved to intercept aquatic morsels. I must have spent at least half an hour trying to tempt it, changing nymph patterns several times. I was on the verge of passing the fish by when I eventually struck gold with a #14 hare's ear nymph. On reflection, the smaller, lighter nymphs I had used until then had probably failed to sink to the stream bed in the swift current. On this particular drift, the grayling abruptly turned and took the nymph whilst facing me. As the line tightened, I rejoiced at finally fooling it. 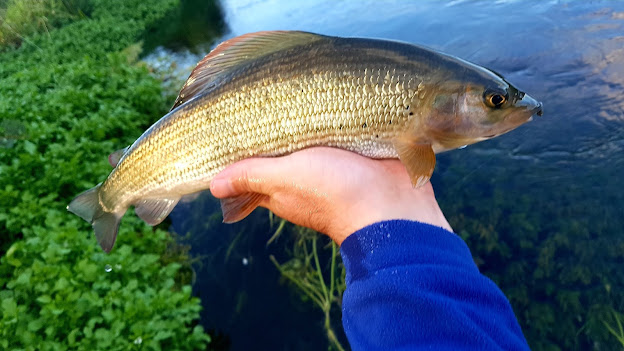 A little further upstream I came to a small tree on the true right bank. It was completely overhanging half of the river's width and its lowest branches kissed the water. A good current flowed under the tree but it was impossible to cast a fly beneath it. It had big fish lie written all over it, but I shrugged my shoulders and hoped perhaps that any fish which resided there may have left its cover to feed in the dusk light. I discerned the large dark shape of a fish in the margin of the opposite bank and my pulse quickened. Bingo. I cast several times at the fish, changing patterns a couple of times, but the fish was unmoved. Something about its shape looked odd but it was difficult to see into the water in the low light. I inched closer and thought it strange that the fish hadn't spooked, and then I could tell it was a pike. I felt a little silly. By now I was abreast with the tree and focusing on the water above it. There was a sudden splash in the water beneath the tree and the sound of grunting and breathing. It sounded like a dog had jumped in the water for a swim but there really shouldn't have been any dog walkers on this private land. I crouched down to look beneath the branches and saw two dark, wet, slicked back heads looking at me. I was a little shocked to see something so unexpected - two pairs of intelligent eyes staring back at me - and the hair on the back of my neck bristled. I realised I was looking at two otters! It was the very first time I have seen them in the UK and I felt very lucky. Sure as anything, the otters caused a huge trout to dart out from beneath the tree and away upstream.

I caught two more trout with a nymph, each time marvelling at their sea-trout-silver appearance, before it became too dark to see and I packed it in. 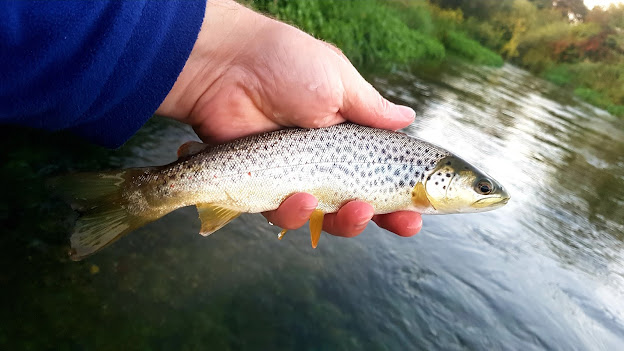 As I packed away my fishing gear into my car boot by torchlight, a bird - which I assumed to be an owl - let out a series of haunting screeches in the distance. On the short drive back to my holiday cottage along a single lane road, a deer and then a hare were momentarily caught in my headlights before they bounded away into the night. Hampshire is one of the most populated counties in the UK but if you drive just a little way off the main roads, you discover large open spaces, abundant wildlife and dark, starry night skies. It was only the county next door to mine, but my long weekend break offered a wonderful temporary escape.