Season Swan Song on the Wylye

I brought my trout fishing season to a close by spending it in the good company of my friend Steve, as his guest on the Wilton Fly Fishing Club's section of the River Wylye. It's the second time this year I have fished the Wylye and I enjoyed exploring this Wiltshire chalkstream once again.

As I neared the river in my car, I stopped at the side of the road to admire the village of Great Wishford, which sits in a hollow in the river's valley. On my previous visit red poppies had lined the grassy verges of this road and wheat grew in the fields. The poppies had long since gone and the fields were now bare. 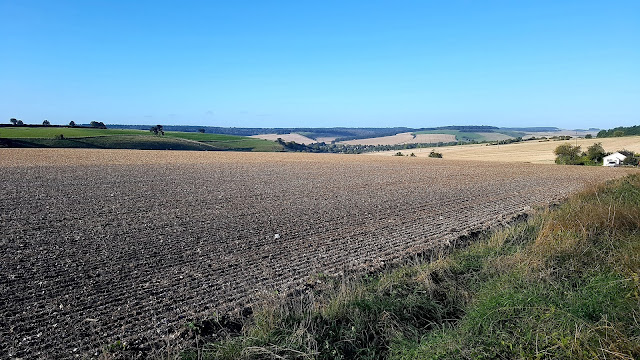 The sky was clear and the palest blue, the air crisp and cold. A persistent, blustery wind rustled the leaves of the yellowing trees. The wind didn't whisper as it touched the leaves of the alder, oak, hawthorn and willow. Instead, the force of the gale electrified the leaves in a cacophonous roar. Soon the boughs will be fully exposed and the trees will stand grey and stark in the wintry land. 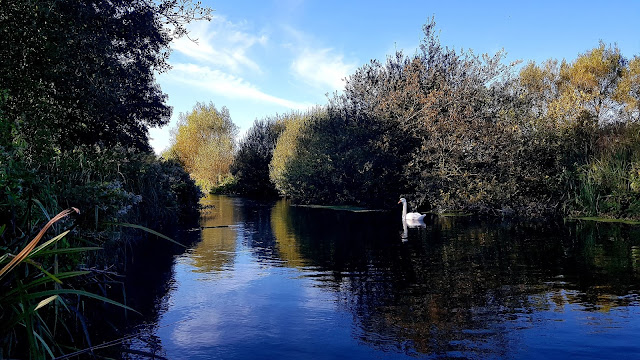 The water felt cold as I stepped into the river at 10 a.m. A good current of water flowed past floating green weed on the left bank and I suspected a fish or two would be lying under the weed and in the riffle immediately downstream of it. The strong downstream wind made casting very unpleasant. It needed a force similar to chopping wood with an axe to punch my nymph into the teeth of the wind. Even as I write this, my casting arm and shoulder still ache. It wasn't long before my indicator of white wool checked in the bubbles of the riffle and an energetic grayling came to my net. It had taken my olive and pink blend shrimp pattern. 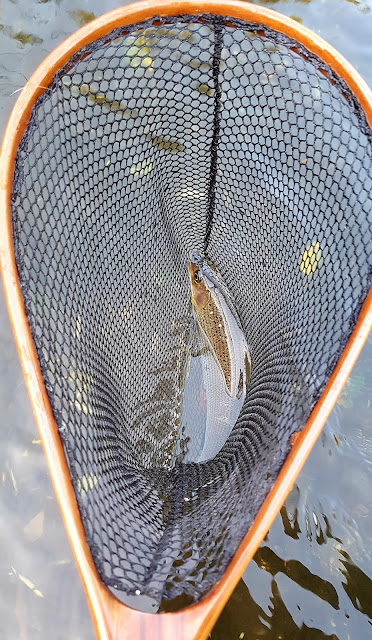 I took a few steps upstream, and when the wind allowed me to land the nymph just above the floating weeds, so that the fly drifted precisely in the current next to them, a fish took the nymph. I'd have staked all my worldly possessions on a fish holding in that lie. This time, it was a trout. 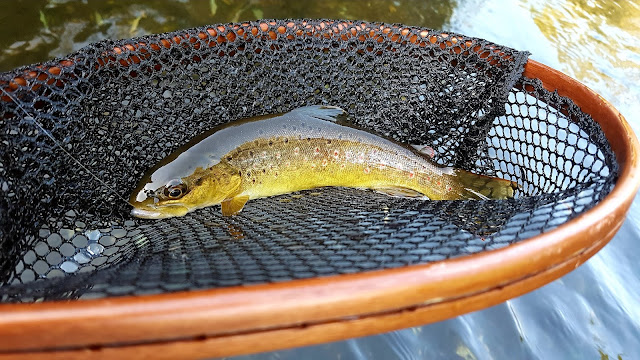 We made slow and steady progress up the river, still in the cold shade of the trees. The merciless wind added an extra chill and I wished that I had worn a coat over my fleece top. Steve was once again happy to simply accompany me without a rod and watch whilst I fished. Before a sharp bend in the river, I caught another trout with a nymph from a seam of current against the left bank.
After the sharp bend the river followed a north-west to south-east course where the sun was able to penetrate the trees and filter down to the water, offering a reassuring warmth. I saw the turquoise flash of a kingfisher as it flew upstream, making its shrill, piercing call as it went. Zee-zee-zee. I don't know why I take any greater pleasure in seeing a kingfisher than say, a blackbird, but I do. I perhaps treasure their sightings because they are only ever seen fleetingly but it may also have something to do with the pursuit of a common quarry. At the same spot another bird sang the most melodious song from the bankside vegetation to my left. I didn't recognise the sound. Soon afterwards, a small brown bird flew across the river to a gap in the roots of a tree on the other bank. Steve identified it as a wren. I have since listened to a recording of the wren's song and it is the most beautiful and unforgettable sound. 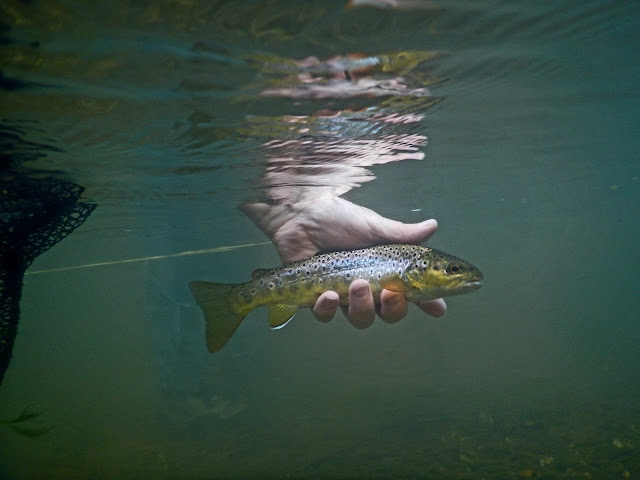 We encountered several rising fish which looked to be taking small olives. I briefly swapped the nymph for an olive CDC fly and missed a rise to it. I don't believe that fish felt my hook, but it didn't rise again and the two or three fish ahead of it stopped rising too. I tried a CDC & Elk with no success and didn't use a dry fly again after that, preferring the nymph. I caught fish intermittently as I ventured upstream, without the success rate ever becoming as routine as clockwork. By 1 p.m., when we paused for lunch, I had caught seven trout and three grayling in total.
We ate our sandwiches outside the fishing club's hut. After lunch I put my coat on because the wind was still relentlessly blowing and I felt cold. We walked back down the river and entered the water at the same place we exited, where a beach of white gravels lay exposed by the low water. In the pool immediately upstream I caught a trout with a brilliant band of blue extending down its flanks. Some brown trout have a blue spot on their gills, but I have never before seen a brown trout quite like this one. Instead of its adipose fin being tinged in a shade of fiery red, the edge of its adipose fin looked to have been painted with mauve coloured nail polish. 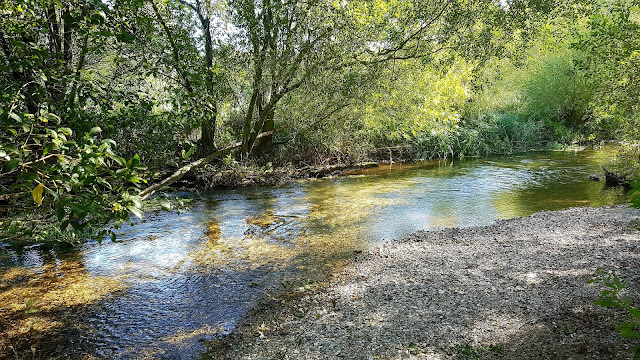 I caught two more trout in Steve's company. It was 3.30 p.m. when he went off to fish a beat higher upstream. Alone, I continued to make steady progress upriver. By now the sun was at its warmest and I felt a lot more comfortable wearing my windbreaker. I caught three more trout and a grayling, all with a nymph, taking my tally to thirteen trout and five grayling. I was surprised that the trout outnumbered the grayling so late in the season. I had seen several large grayling in the water, in and amongst shoals of the same species, but they were largely lying dormant. I trundled many nymph patterns past the largest of them (and the smallest!) but they were predominantly unmoved. Grayling are a mercurial species of fish and on another day they may have gorged themselves like hungry pigs at the feeding trough. 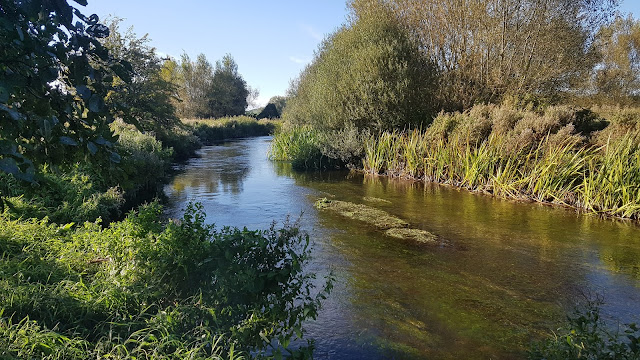 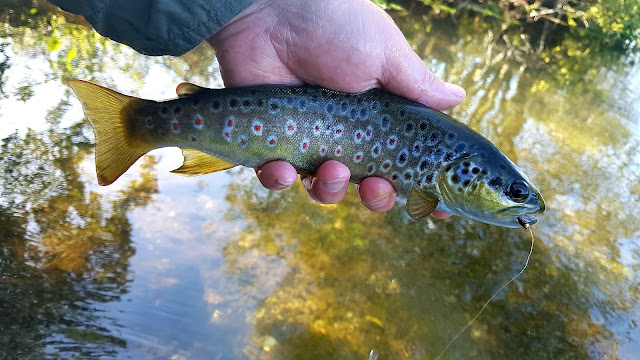 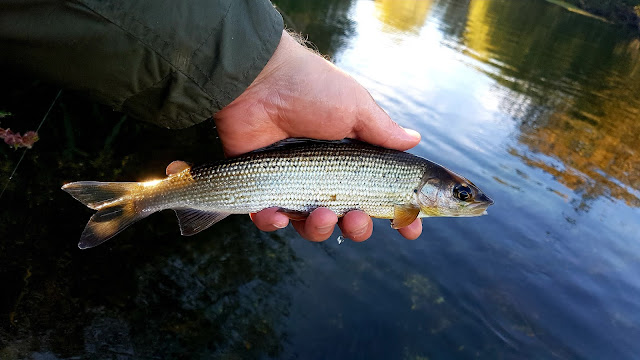 Steve and I had agreed to call it a day at 5 p.m. Just as it was approaching the agreed hour, I came upon the last pool I would fish this season. I hooked and lost a small trout in the body of the pool and then my attention was drawn by a fish which leaped a foot and a half clear of the riffle water at the head of the pool. It was enormous, and it hit the water with an audible splash. I moved into a casting position and delivered my nymph a metre in front of the fish. The fish took the fly in a swirl and I felt its substantial weight when I struck. It could only flee downstream as ahead lay rocks and thin, ascending water to the next pool. It did turn downstream and fled directly towards me and the sanctuary of deeper water. In that split second I could see the broad width of its dark black shoulders as the fish was illuminated by the sun and I gasped in surprise and joy. It was a fleeting joy only. I wasn't able to retrieve the line quick enough to maintain a permanent tension, and the hook came free. I was devastated. That would have been some fish to have brought my season to a close. One haunting miss now stands out more to me from that day, imprinted in my mind, than any of the eighteen successful moments of capture.
This was a good day of fishing and a great way to cap off the season. I felt that I had got to know the Wylye better and liked what I had seen (thank you, Steve). The year 2020 has been one of the strangest of my life, momentous in several respects. As I age the years seem to pass ever faster. I now measure the years by the passage of the fishing season. It's a little depressing how quickly this truncated season has come to an end. I shall look back and remember it as a year of good fishing at least. The year when I became an enthusiastic devotee of the chalkstream. I draw too little reward to stand the cold of winter and fish for grayling. I am foremost a trout angler. My fishing gear has now been cleaned and stored away for the promise and warmth of spring next year.
Labels: Chalkstreams England