The world has changed dramatically since I last wrote and in ways that were quite inconceivable at the time. Out the window went my planned season opening weekend on the Dorset Frome - a real shame as I sat indoors during some of the finest early May bank holiday weather on record. I would have been in Montenegro as I type, somewhere in the mountains with a fly rod in hand I imagine. But in the grand scheme of things I have nothing to complain about. My health and livelihood remain intact when misfortune has struck so many.

After the Prime Minister's announcement last Sunday that angling would be permitted, I began a furious quest to find some river fishing within a comfortable driving distance from my home in the middle of Sussex. I'd class 'comfortable' as up to an hour drive each way. You wouldn't think so by looking at the verdant land but Sussex is something of a trout desert - a victim of its geology and hydrology. Its rivers typically rise and flow in the Greensand of the Weald which means they cut deep into the soft clay sediment, suffer from soil erosion and discolour from siltation. It's a shame, because if you travel two hours by car in both east and west directions, you will encounter picture-book rivers nourished by chalk aquifer. The cogs in my brain started to work and in the vague recesses of memory I recalled an email from an acquaintance in 2016 with a hot trouty tip (thank you Tony). I now had somewhere to go, and began to look forward to breaking the shackles of lockdown for the first time in almost two months.

It was a joy to hit the road and leave my four walls behind, the hour long drive passing through historic towns and villages where good numbers of people were outdoors enjoying the fine weather, exercising and standing in the odd looking 'social distancing' queues outside the few open stores. I wondered if perhaps the easing of restrictions had come too soon but put these thoughts to the back of my mind. As I continued west through a wide basin of fertile land a sign post announced I had reached the South Downs National Park. The river I would eventually fish snaked its way through this wide plain and I followed it upstream until I reached the point identified in the email. You will forgive me for not wanting to disclose the exact location. 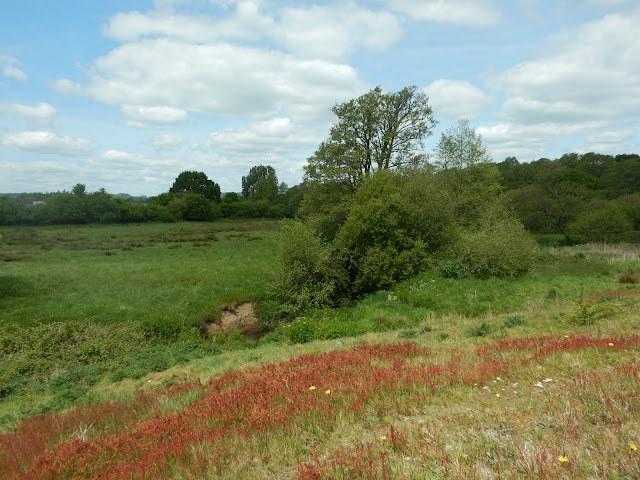 My expectations weren't very high. This was a free section of river (meaning unloved) on the outskirts of a town. It had been described as presenting rather challenging fishing, a river with a boggy clay bed and steep banks making it difficult to access. Waders were a must, my acquaintance had said, and "there will be several dog-walkers about." After two months in lockdown I'd have taken anything. Having found a place to park I startled two deer whilst walking to the river. They bounded away through the undergrowth, leaping high over brambles. I came to a wide clearing and then caught my first glimpse of the river. 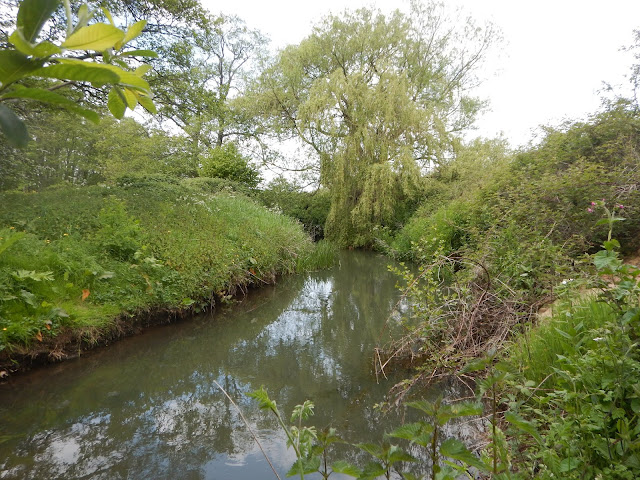 I walked a little way downstream to where I had seen some wider looking water from satellite images. I disturbed what is probably the largest and most vividly red fox I have ever seen. It melted silently into a thicket of brambles. The brambles were head-high and presented an impenetrable barrier between me and the river but I found a small opening and then slid down the sheer, exposed clay bank on my backside, entering the water as silently as I could. It looked a promising pool. A tall willow tree stood at the head of the pool and the longest of it tendrils sipped the water and danced in the current. I rested the water and while I watched a fish rose. That set my pulse going a few beats faster! I tried a few casts with a small hare's ear klinkhamer, but when that failed to arouse any interest, switched to a nymph and hooked a fish on my first drift. It was a picture-perfect wild brown trout with bright orange, rather than red, spots on its flanks. 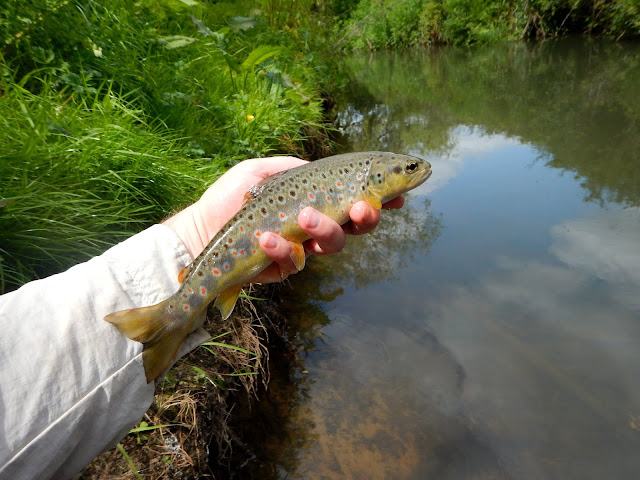 I hooked but lost three more fish in that pool. The nymph just didn't stick and I blame early season rust. Just around the next bend I came to a small, dark pool, completely shrouded by trees where a fish was rising just beneath a low hanging branch. It was a difficult cast and I could tell it was only a little fish, but I resolved to catch it. I switched flies to a soft upwing CDC pattern and immediately lost it to the trees. The fish rose a few more times while I tied on a new fly. I cast several times more, each time getting closer until, at last, the fly landed in the right place and the little fish took it confidently. It took almost 40 minutes to creep into position and achieve the task. Not a single other thought entered my mind in that time. In case anyone wonders, this is precisely why I go fishing. 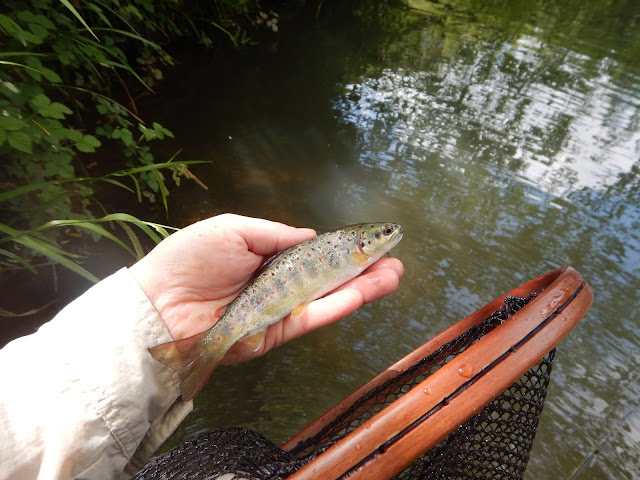 Where the river picked up speed and flowed over gravel and ranuculus it lost a little of its colour and looked an attractive little trout stream. Wherever ranunculus broke the surface of the water they were in bloom with pretty white flowers. 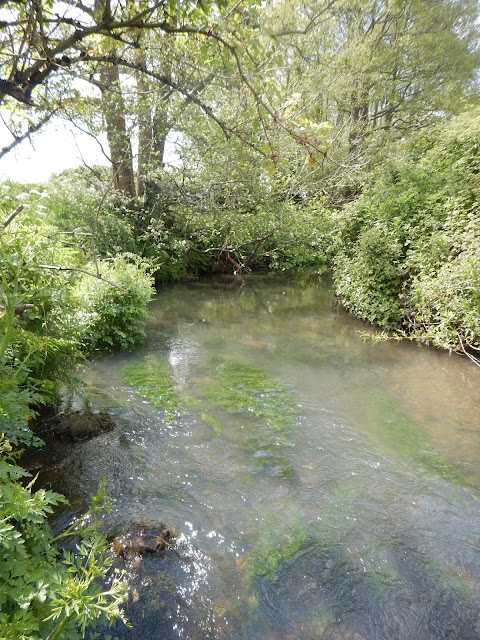 I caught two more trout on the nymph and lost several more. A few mayfly started to drift, flutter and lift from the water, but not in any number to really excite the trout. The birds didn't miss them though. One little trout not six feet adjacent to me enthusiastically gorged on a hapless mayfly. Its timing was a thing of precision. I took the excuse to tie on a mayfly pattern. Sure enough, the little trout came up to take it and sure enough, the hook was too large to set. It did bring a smile to my face. 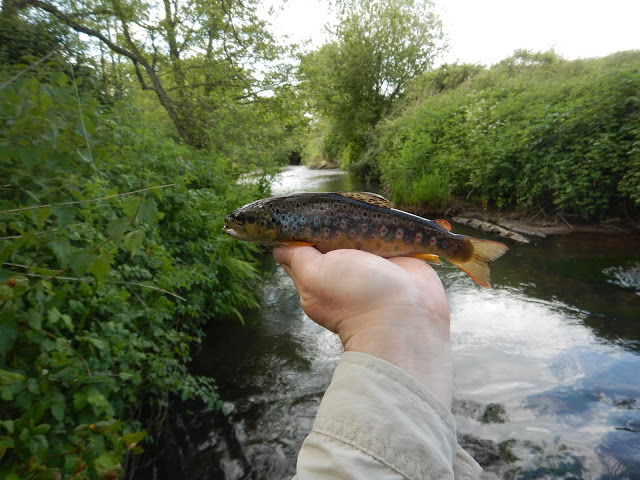 It was a popular walking spot but the high vegetation made a green tunnel of sorts and I mostly forgot the people were there. Of course, where there was a convenient access to the water it was common for dogs to be in it and splashing around. I got the sense that the trout were used to the disturbance and it seemed to matter little to them. In a first for me, one man was even polite enough to ask if he could send his border collie in for a swim downstream of me. I wish this behaviour would catch on! 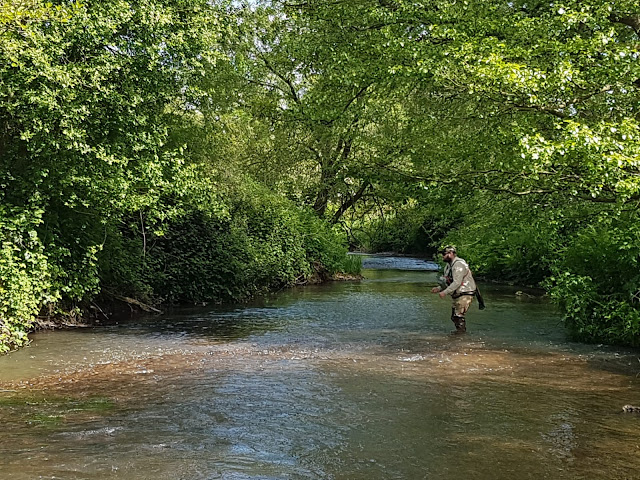 It was wonderful to be back in nature. The sun, trout and sounds of running water and birdsong were just the tonic I needed. I usually take fishing for granted, but no more. I enjoyed this single day as much as any of my red letter days.

Wherever you are in the world, take care and stay safe.
Labels: England