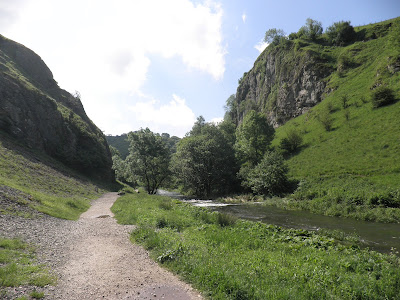 It has taken me longer than planned but on Thursday this week I finally chalked up my first British trout of 2012. I doubt there are many more dramatic places to have done it. The impressive limestone cliffs and mountains that hem in the River Dove between Dovedale and Milldale make this a breathtaking venue to fish. The caves in the mountain walls and the small, pellucid trickles of water flowing from dark spaces in the mountains add an element of wonder to the setting too. I found myself wondering about the events and people that these caves must have witnessed over the ages, the shelter they must have offered to travellers and wild animals, the outlaws they may once have harboured, and the rituals that may once have been performed in them. In some respects, the river gorge reminded me vividly of scenery I had seen in Slovenia, another limestone karst region. My host, Neil Hotchin, a member of the Leek and District Fly Fishing Association, must have grown weary at the number of occasions I paused and remarked on the beauty of the place. At times I must have seemed to him more interested in the scenery than the fishing, but it is, in fairness, a place to be admired. For once the fishing took second place. 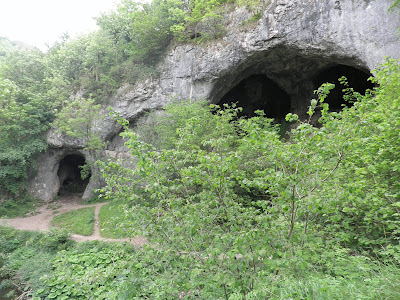 Judging by the amount of foot traffic on the path next to the river, I am clearly not the first person to be impressed by the landscape and neither will I be the last. There were countless walkers in all the degrees that one finds, from serious ramblers who looked equipped to take on Everest, to those sauntering casually, their pet dogs straining impatiently at the leash. There were several large groups of school children, all very polite, and a bird watcher or two, focussing their impressive looking binoculars into the trees. Almost all of them stopped to enquire if I had caught any fish. Some very politely asked for permission to take photographs but most didn’t and neither did I expect them to. Neil had suggested visiting midweek to avoid the crowds, and so I duly took off a day from work to fish this famous limestone river. I can’t imagine how busy the weekends must be. Wikipedia mentions a footpath count on a Sunday in August 1990, recording 4,421 walkers on the Staffordshire side of the river and 3,597 on the Derbyshire bank. It was only after 5pm, when the crowds had all but gone home, that I could experience the river as Izaak Walton and Charles Cotton must have done in the mid 1600s. But by then the wind had picked up, the grey clouds had rolled in from the west and it looked likely to rain. 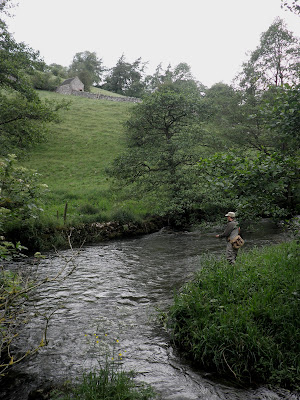 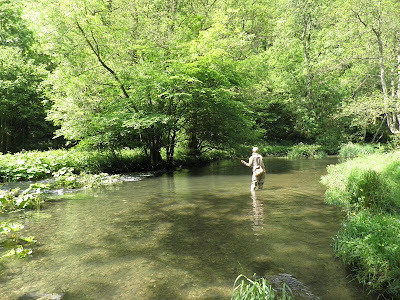 Fortunately, the fish appear to be completely habituated to the presence of humans. I was stunned when a fish rose in the exact point I had been standing a second or two before, water still slightly muddied, just after I had clambered up the river bank to exit the river. Again, when I walked a mayfly pattern downstream from my highly visible position on a wooden boardwalk next to the river, I tempted two trout to rise and take the dry fly in full view of myself. I missed both rises. I made contact with both fish for a brief moment and watched them flee for cover in the depths. Despite the Dovedale trouts’ familiarity with man, the fishing was by no means easy. In fact, it was a frustrating day’s fishing for me. Even with the presence of a good number of mayfly hatching consistently throughout the day the trout were not fully switched on to them. It wasn’t the feeding frenzy that may have taken place a couple of weeks ago, but I chose to largely stick with a mayfly pattern for most of the day. It is an exciting method and an exciting time to fish. However, it was all a bit hit and miss. I managed to entice a good few fish to take my imitation, but my hook up ratio was very low. I’ve heard that trout sometimes slap at mayfly, drowning them, and eat them at the second go. I’ve heard this is particularly so towards the end of mayfly season. Perhaps this explains it. Perhaps I was just a little too slow on the strike. Whatever the reason, it makes you think about it, and prevents the fishing from being too easy. Nobody wants easy fishing, right? 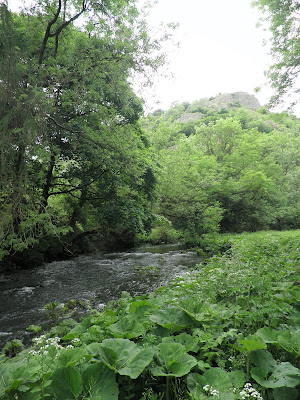 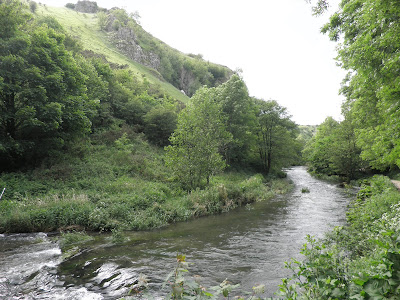 A rather tame grey heron kept us company for a while. I couldn’t tell if the heron was stalking ducklings or fish, but the ever wary mother ducks would do their best to chase off the heron with much noise and wing flapping when the heron came too close. For the most part, the ducks had a field day eating the hapless mayfly, actively pursuing them, and once or twice my imitation fooled them enough for me to have to mend my line. My first Dove trout fell to a mayfly. After being out of the country for most of the peak mayfly activity I was happy to at least catch the very end of the mayfly season. The trout had a deep gash on its back, reminiscent of the wounds made to whales and dolphins by outboard motors. A heron strike may explain the wound as Neil told me there are no reported sightings of cormorant in the area. In a bizarre twist Neil had previously caught this same fish, and was happy to confirm that the wound is healing well. It was well enough to be feeding, at least. In the end I lost many fish, too many to count, but I did land another three trout. The Leek and District Fly Fishing Association do not stock their waters, but the club immediately upstream do, and one of the trout brought to the net was a stockie which must have been washed downstream in the floods. It tellingly had ragged fins but also looked as though it was wearing pink lipstick. I can only assume it gained these scars to the top and bottom of its mouth from a cement hatchery pond. Neil also reported catching a stockie bearing these scars. 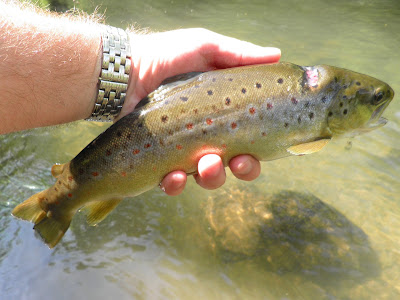 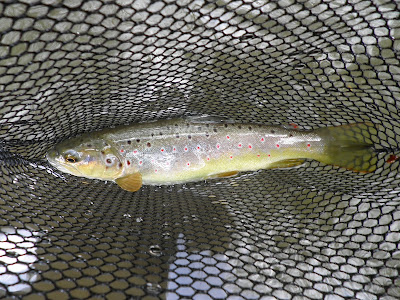 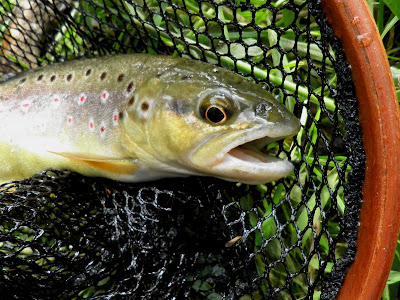 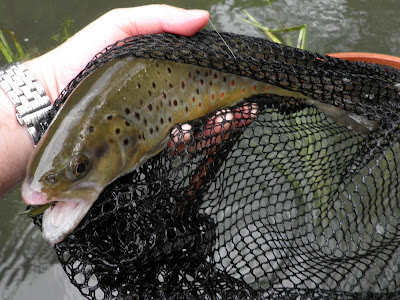 When the fishing was done we crossed back over to the Staffordshire side of the river and the small hamlet of Milldale by taking Viator’s Bridge, an historic stone bridge built in mediaeval times. The bridge is mentioned in Walton’s book “The Compleat Angler”. The parapets were added after Walton’s time. Faced by the small bridge Walton wrote “What’s here, the sign of a bridge? Do you travel in wheelbarrows in this country? This bridge was made for nothing else – why a mouse can hardly go over it, tis not two fingers broad!”