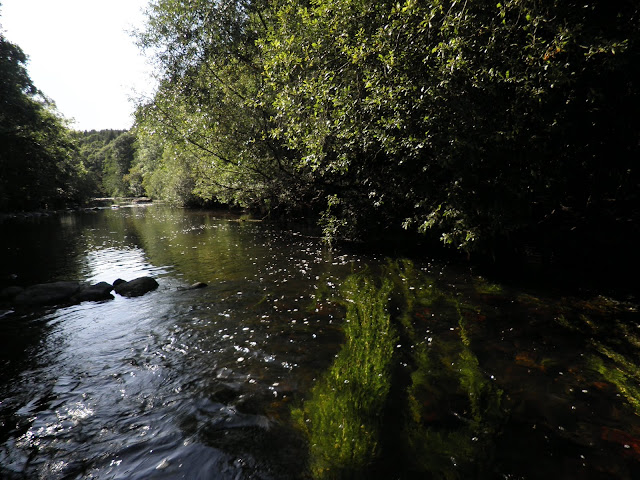 The River Ithon is a good sized tributary of the River Wye. It was due to its size that Laszlo and I chose to fish the Disserth beat downstream of Llandrindod Wells this past Sunday. I’m pretty happy on the tiniest of overgrown streams but every now and again it makes a nice change to try something different. It was a chance to air out my 8’6 5wt rod which I have ignored for so much of this season, and to cast in a more open and forgiving environment. As always on larger rivers, it takes me a little while to get to grips with drag and line mending. On the plus side, it means less time on the knees, crawling on all fours, because the fish are usually a little less shy than their small stream counterparts. It still amazes me how close you can get to fish in a good sized river. 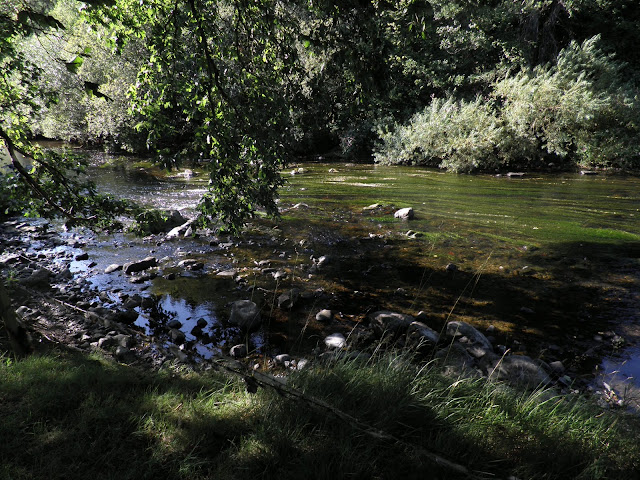 Under a low grey sky the temperature was cool for August and a very light drizzle accompanied a blustery downstream wind. An uneventful first hour’s fishing suggested this would not be an easy day’s fishing. Fortunately the weather gradually improved. The clouds disappeared to reveal a brilliant blue sky and the wind abated. The warming sun stirred the river valley to life, arousing insects and birds from their cold lethargy, and it magnified the colours of the wild flowers and water. The red stained bedrock, in places covered with sweeping tendrils of bright green water ranunculus, added to the vivid scene. 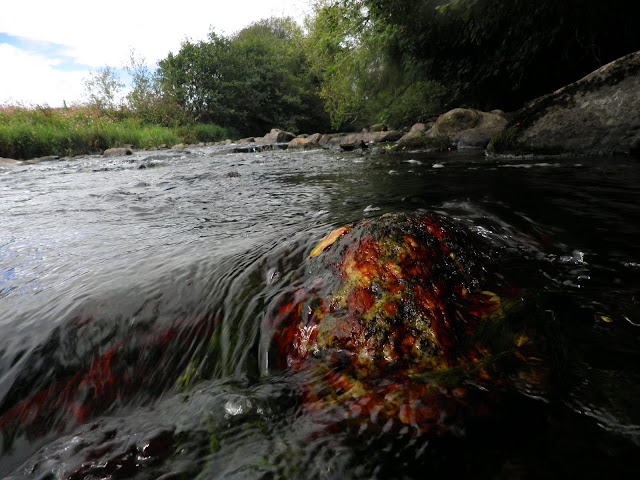 The energising effect of the sun wasn’t spared on the fish. Trout and grayling began to rise. In a lovely fast-flowing pool head I took a 12” grayling on a #16 Terry's Claret Parachute Emerger and a 13” brown trout a few casts later. Neither fish wanted to stay for a photo though - a pity as the heavily spotted brown trout had a remarkable azure blue sheen to its gill plates. A grayling of 6” was soon enticed by a small PTN tied below the dry fly which I drifted through the same bubble line, and this one stayed long enough to pose for a brief photo. Without exception, every grayling I have caught has reacted as though it had been injected with a dose of adrenalin the second it was removed from the water. They are a tricky fish to handle and photograph. 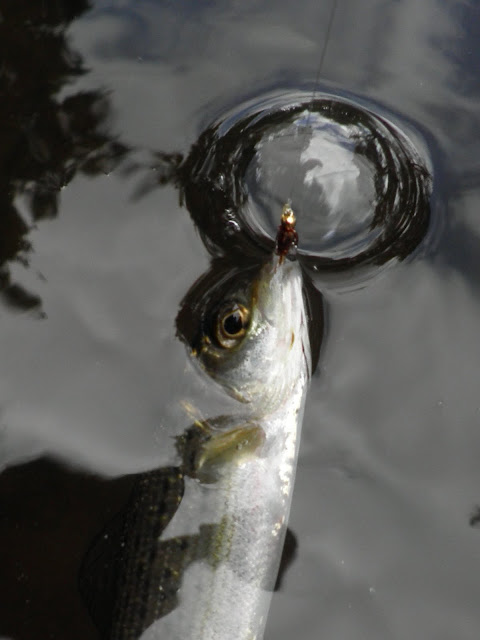 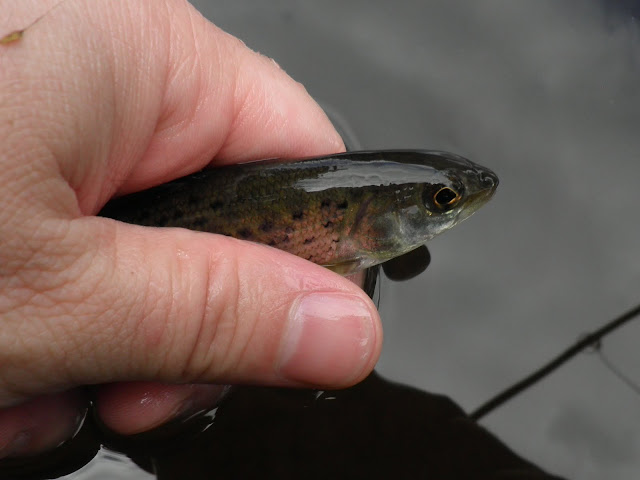 The Disserth beat flows through a tranquil agricultural valley with cattle and sheep in the adjacent pastures. A bellowing bull was the only real distraction of the day which illustrates the escape on offer. A heron flew overhead emitting a sound not dissimilar to a hoarse dog bark. When I next looked up into the sky a red kite was circling directly above me. A little later a brown specked sparrowhawk flew up river and into the leafy cloak of a large oak tree. 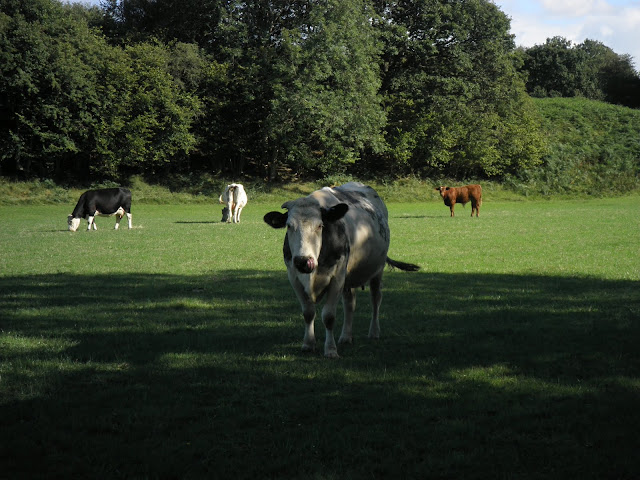 Making my way upstream, I caught a handful of small grayling between 4” and 5” in likely looking drifts between ranunculus. They had voracious appetites for the dry fly and not wanting to damage the fragile little fish I pushed on searching out larger specimens. 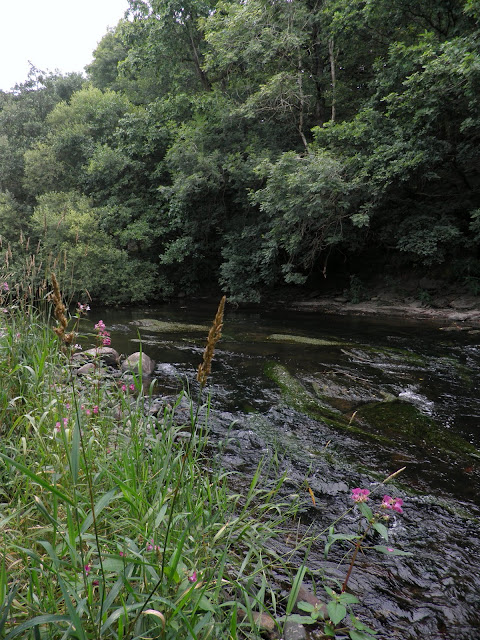 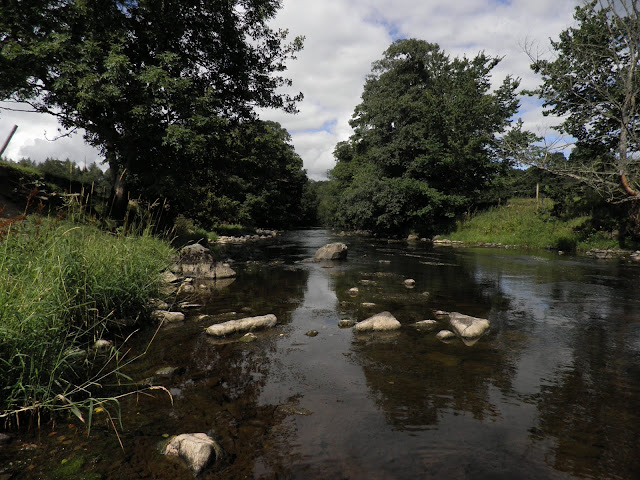 Some way upstream a rise revealed the presence of a fish in a different weight category to the little tiddlers. As I watched, it rose again in the same place, next to a clump of ranunculus in the centre of the river. I nipped off the small PTN nymph and approached carefully. It took me several casts to land the fly in the right place but when it did the fish rose to the emerger slowly and confidently, showing a good length to its back in a humping rise. I struck… to fresh air! Fighting down the disappointment of missing the rise I cast once more and again the fish rose confidently to the fly. I struck… again to fresh air! Cursing under my breath, I tried again, thinking I had blown my chance, when the hungry fish rose to my fly for the third time. This time the hook set and I lifted my rod into the grayling's substantial weight, and brought it to hand after a tense, tippet straining fight. I estimate its length at 17” and it ranks as one of my best fish this season. 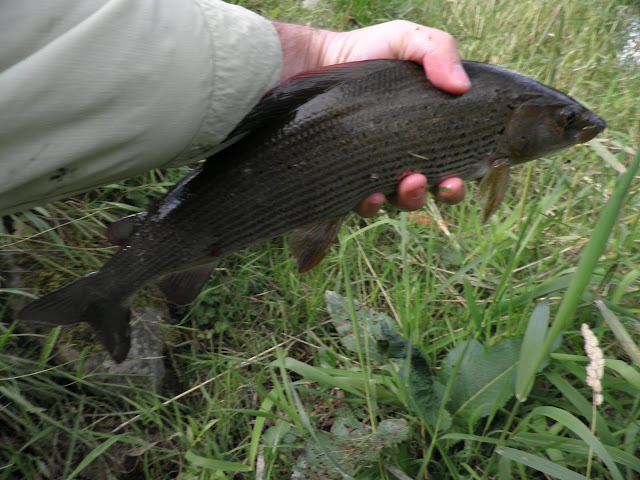 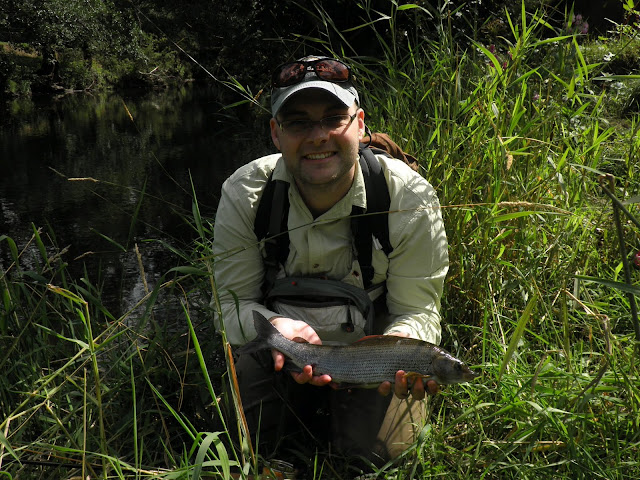 That was it for me – the day couldn’t have got any better. After releasing the fish I watched it swim back to the same spot where it was caught, next to the ranunculus. I observed it for some time and it appeared to be in sound condition.
﻿
The river was very shallow upstream but I managed to bring two little trout to hand, both eagerly taking the Terry’s emerger within seconds of it landing on the water. It was only when looking at the photos later that I realised one was a salmon parr. 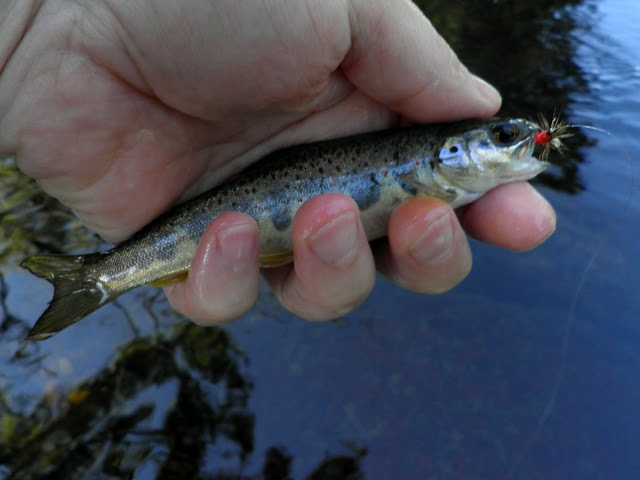 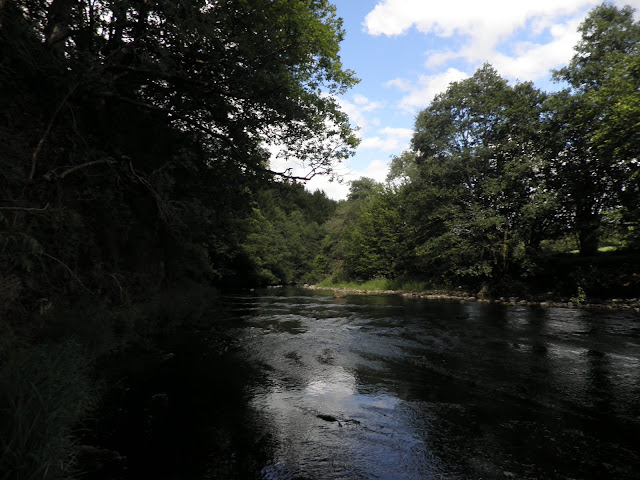 once again delivered a fine day of fly fishing. This river has a good reputation for its grayling sport, and so it proved.