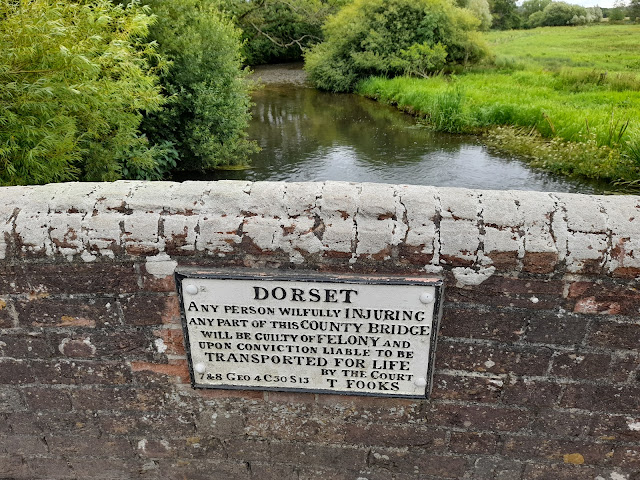 I'm in the midst of a week's holiday in Dorset with my family. We're staying at the Dairy House Annexe which is run by the affable John Aplin. Less than a quarter of a mile away from our accommodation, past water meadows where cattle and the occasional deer graze, a line of trees hides the River Frome's eastward journey to the sea. As I watch the pretty scene from the front door, the trees beside the river are being buffeted by gales of 25 mph, the same pattern of weather since our arrival a few days ago. The strong gusts have made fishing the Frome extremely challenging. Fine tippets don't pierce strong winds very well and hatching insects know to bide their time for better weather, lest they be blown too far from the water. Notwithstanding the wind, I've enjoyed three relaxing days of fishing the "Home beat", not with any real focus, but rather here and there when the family schedule permitted. 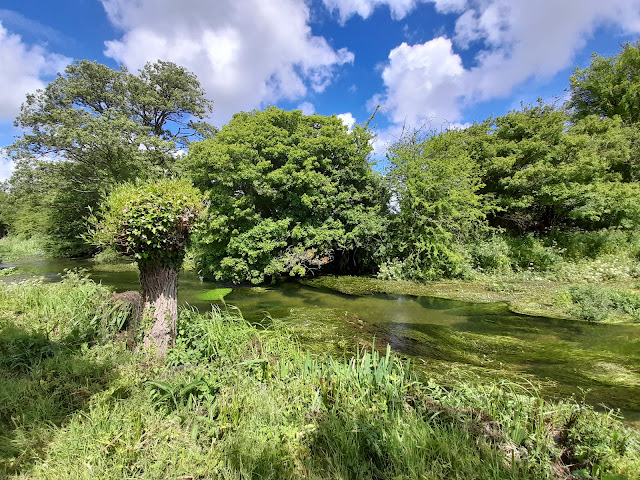 From the house a boggy path winds through a wood to the river, emerging into daylight at the river's edge at the halfway point of the beat. Each time I have walked the path I have listened for the jarring screeches of a pair of jays that live in the trees. The Frome flows leisurely, not especially wide and heavily weeded in places. The proliferation of weeds and the insects they harbour might explain in part the Frome's reputation as a place to catch enormous grayling. The British record was caught from the Frome in 2019, weighing a staggering 4lb 8oz. Grayling of 3lb and more are rare and considered trophies. 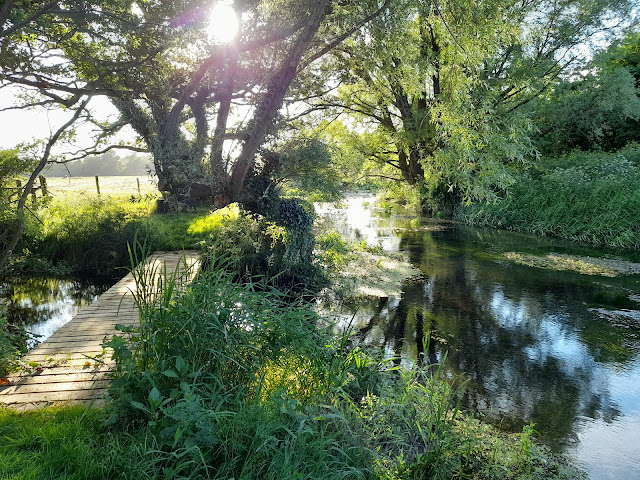 Over the past three days I have been struck by the blissful solitude of this place. There is no road traffic nearby. There is a railway line somewhere in the valley but passing trains make a pleasant sound to my ear. Only later in the week did I place the main difference from the venues I normally frequent - compared to the congested skies of the south east, there is very little air traffic in the south west. The sounds of nature are heightened here, wind rustling leaves, gurgling, bubbling water, and melodic birdsong. I feel as though I have taken a step back in time to a primeval past. In this natural oasis I have seen abundant nature, especially deer, multiple sightings of kingfishers and, whilst out of place and unwelcome, I enjoyed a long sighting of a mink as it scurried around a fallen tree beside the river. 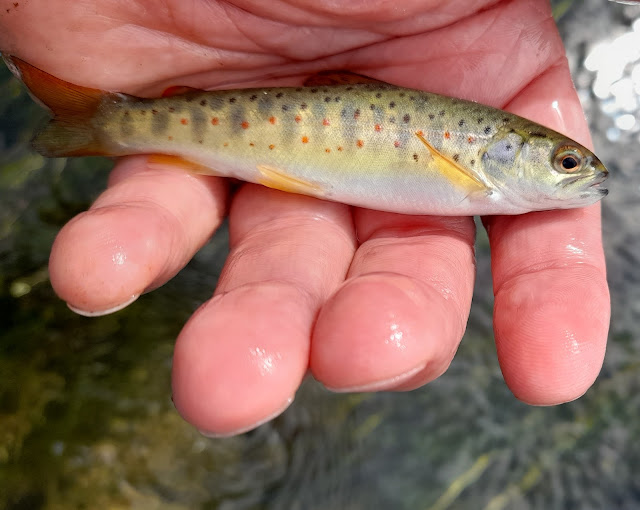 The fish here are wild and incredibly skittish. The trout are especially shy, prone to bolt at the merest disturbance. It takes enormous patience and stealth to move within casting range of a sighted fish, and most occasions end in failure. Coupled with the ferocious winds, my catch return has been modest. Three trout and four grayling landed in three days. It has been a long time since I have felt this challenged by a river, but I found it a rather welcome feeling. Challenge provides for greater reward - and a sense of loss - and two fish from the past three days stand out from the rest. 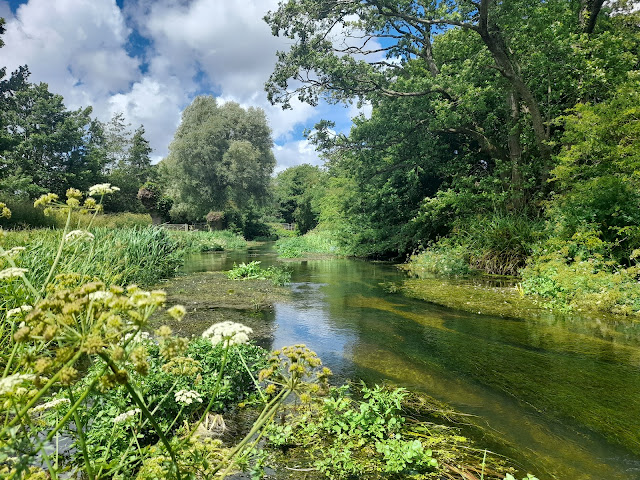 The first was a trout of around 2 lbs. I was fishing the North Stream, a carrier of the Frome, when I spotted the dissipating rings of a rise. I had seen very few rising fish in the two previous days so I was immediately encouraged. The fish had risen in a relatively deep bend of this modest stream. High on the bank I dropped to my knees but with trees to my left and right, high grasses behind me, and a brute of a downstream gale, I had little chance of landing the fly anywhere other than in the green stuff. I scampered downstream, around a large tree and through thick undergrowth, and dropped into the water. A well-proportioned grayling lay in the shallow water beneath the tree's low hanging branches, which rose and took a natural fly as I watched. I inched forward to a range where I could make a bow and arrow cast beneath the branches. My first cast dropped short and as I pulled the fly back to my left ear for another go, the fish darted away.

I crept out from beneath the tree's branches and waited for a break in the wind to cast my fly to the place I had earlier seen the rise. The cast was well placed and a metre into its drift a fish launched itself quite savagely at the parachute Adams. I struck successfully and brought a 10 inch grayling to my net. I was delighted by the application and simplicity of result.

Whilst there, I flicked the fly to the top of the swirling bend when I saw a large shadow lift from the depths, at first black but then gold as it reached the surface, unmistakably a trout. The fish lifted its snout to a millimetre from my fly, which it rejected but then circled back in a flash and drifted beneath my fly, rejecting it again, circling back a third time before spurning my offering a final time. What drama! I'd held my breath the entire time. I applied some 'mud' to my tippet and cast to the same place and this time the fish rose sedately and took my fly at the first time of asking. In the excitement, I pulled the fly from the trout's mouth and sent it fleeing to the shelter of the bank. I was devastated. The haunting misses stay with you just as the best successes do.

The second fish resulted in a far happier conclusion. On the first morning, after 90 minutes of fruitless fishing, I stopped at a pool of water behind a recently fallen willow tree and knew that it must hold several fish. The water flowed glacially and offered some depth, factors which are attractive to river dwelling fish. As my eyes settled I could see a couple of fish in the tail of the pool. I caught a 7 inch trout from the centre of the pool with a drift of a size 18 tungsten nymph, and then a 9 inch grayling from the water against the far bank. It had just struck noon and the double capture was a nice way to end off my first morning on the Frome.  But the pool was yet to yield its best...

The large fallen willow had made a narrow pinch point of water against the far bank, no more than 3 feet wide. I shuffled into range, the water reaching my waist, and flicked my nymph speculatively into the upper reaches of the channel. After several seconds, just as my indicator entered the main pool, the white wool bobbed violently beneath the surface and I struck into a good fish. A very good fish I thought, as my 3 weight rod bent at an extreme angle and seemed to groan under the pressure. When the fish breached the surface I gasped. A huge red bordered fin broke the water, followed by the broad flank of an enormous grayling, certainly the largest by distance I have ever hooked. I began to feel the jingle-jangle of big fish nerves as worries and doubts flooded into my mind: never mind my tippet, would my rod hold?! The grayling used its hefty weight in repeated attempts to bore back down to the depths, which I resisted by applying side strain. In one heart stopping moment my tippet became ensnared in a clump of weeds but fortunately came free with the fish still attached. When the fish was beaten I struggled to bring it into my scoop net which was designed for much smaller fish. After two or three goes it went in and I exhaled a deep sigh of relief, then cheered out loud! 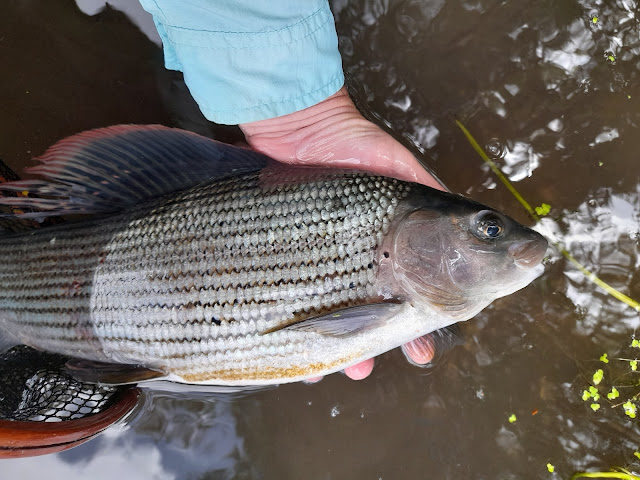 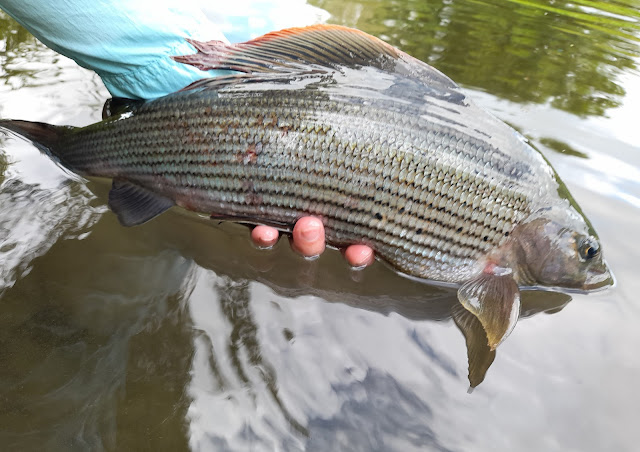 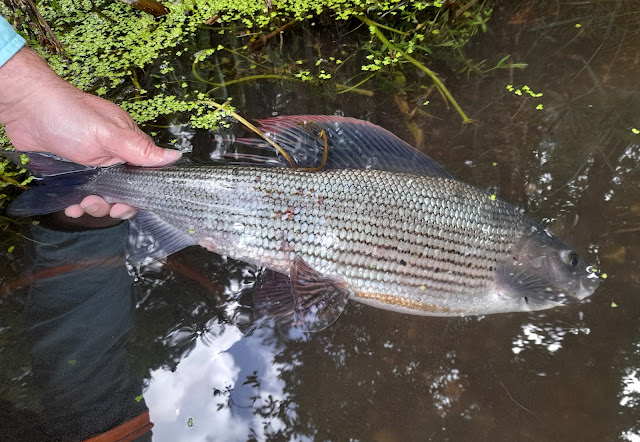 I look at the photos now and think they don't do justice to the sheer girth and scale of that majestic grayling. It measured approximately 50 cm and John, who viewed the photos later, said the words I wanted to hear: "It must be 3 lbs plus, I'd put it at 3.4 lbs." Without setting out to do it, I had caught a trophy grayling. For a whole day I walked on cloud nine. I doubt that I will repeat the feat again.

I have felt the daily grind being washed from my body with every passing day spent on the banks of the Frome, and feel very privileged to spend a week here. It has been a pleasure seeing my young son emulating me with fishing rod in hand and pointing out the fish in the water. I'm pleased that he seems to enjoy being outdoors, something we encourage.

John's 'Home Beat' has been exceptionally challenging and the weather far from optimal, but I have enjoyed the time spent with my family here, and will never forget the magnificent grayling I caught. 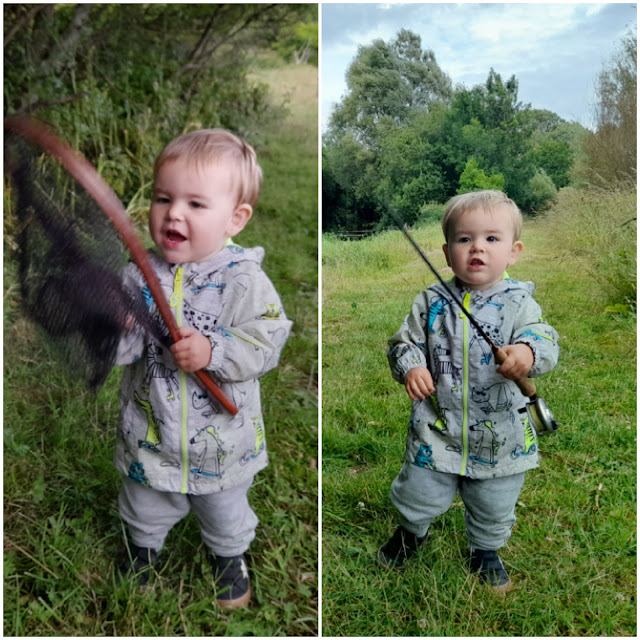