“Fishing brings out a lot of the points in Scouting, especially if you fish with the fly. To be successful you must know about the habits and ways of the fish, what kind of haunt he frequents, in what kind of weather he feeds and at what time of the day, and so on. Without knowing these, you can fish away until you are blue in the face and never catch one… If you use a dry fly, that is, keeping your fly sitting on top of the water instead of sunk under the surface, you have really to stalk your fish, just as you would a deer or any other game, for a trout is very sharp-eyed and shy.”

I look forward to the Wild Trout Trust’s fundraising auction each year when I try to win at least one lot. Being successful without a deep pocket is by no means guaranteed because the bidding can be fast and furious in the moments before the hammer comes down. As well as going to a good cause the auction provides a great opportunity to fish at venues which would otherwise be impossible. This year, I managed to win a day on the Baden-Powell Bentley Fly Fishing Association’s stretch of the north branch of the River Wey, the only section of this river which is classified as a chalkstream. By happy coincidence my day came with a lovely piece of history.

Robert Baden-Powell, the war hero, founder of the Boy Scouts organisation, and ardent fly fisherman, moved to a house in the village of Bentley in 1919 which he renamed Pax Hill in celebration of the end of the Great War. ‘B.P.’ as he was known to friends would live at Pax Hill for 20 years with his wife and three children. About a mile from the house the River Wey ambles north to Weybridge where it meets the River Thames and it was here in 1924 that B.P. established the Bentley Fly Fishing Club. His daughter, Heather, would later recount her father saying, “What a lovely little trout stream that would make” during one of their walks, and of spending summer holidays with her father uprooting reeds and rushes and clearing dead branches from the river to make it more conducive for fishing. B.P. arranged for the stocking of trout, sourced from a hatchery at Hungerford in Berkshire.

In his 1933 book ‘Lessons from the Varsity of Life’, B.P. offered a charming glimpse of the Wey and the rejuvenating effect of fishing: “There is the sweet attraction in the waters nearer home where, in the lush meadows of Hampshire, with the cattle knee deep among the buttercups, and the snipe drumming overhead, the rooks cawing drowsily among the stately elms, you wander slowly, stalking your trout in infinite quiet and solitude, far from the madding crowd and away from the noise and rush of modern life in towns, a comrade among the birds and water voles. Trout fishing is the best rest-cure in the world.”

And so I travelled to the Wey to meet Jonathan Parsons, secretary of the same fly fishing club which B.P. established almost a century ago, now named the Baden-Powell Bentley Fly Fishing Association in his honour. These days the A31 dual carriageway follows the river’s course between Farnham and Alton, the modern road built over the ancient route between Winchester and London. The traffic provides an intrusion which didn’t exist in B.P.’s time but the club has so much water – approximately 4 miles of the river – that we found pockets where the traffic was only a distant hum. 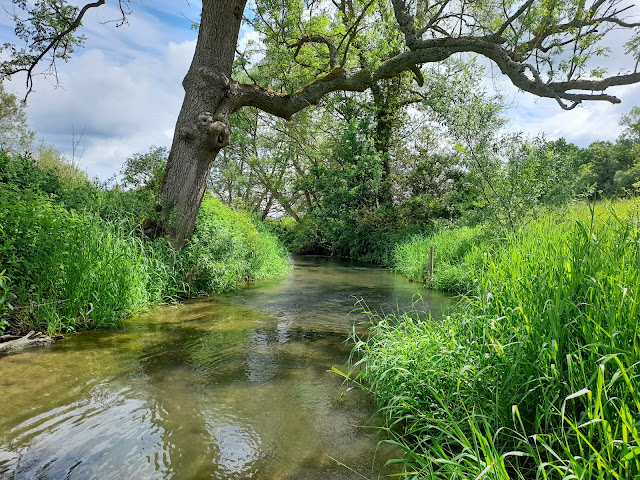 Before heading downstream though fields of yellow meadow buttercups we stood on a bridge and viewed the river. The water carried a cloud of silt and Jonathan mentioned somewhat apologetically that the river wasn’t normally this turbid. In places where the river was shallow and the current flowed at a good lick, pale chalky gravels and sweeping summer growths of ranunculus and starwort on the riverbed hinted at its chalkstream identity.

About 200m downriver Jonathan suggested a good place for me to start and then we separated. I watched the water for a while until a trout rose when I waded carefully into the water. I sent a parachute Adams upstream and the trout took it at the first time of asking. It was a feisty little fish, which zipped through the water like the needle of an uncertain weighing scale, until the hook sadly dislodged. Another trout had risen a further rod length upstream and I was successful in bringing this one to hand, a six inch wild trout bleached a pale cream. I fished the remainder of the pool until my passage was blocked by a fallen willow, catching a small dace with a nymph along the way. 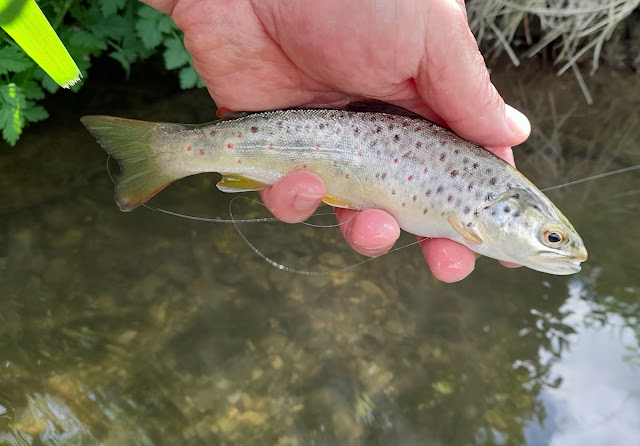 I used a nymph with an indicator of white sheep’s wool through the deeper pools. A trout launched itself at the indicator and when a second fish repeated the trick, I realised it was time to switch to a mayfly. The naturals were just starting to drift downriver and take to the skies. On went a Grey Wulff, but on its first drift I watched a trout come up from the depths to scrutinise it interminably before turning away at the last second. In its place I tied on a French Partridge, a mess of soft hackle, which the once cautious trout snatched confidently. I missed the take and couldn’t rise the fish again. 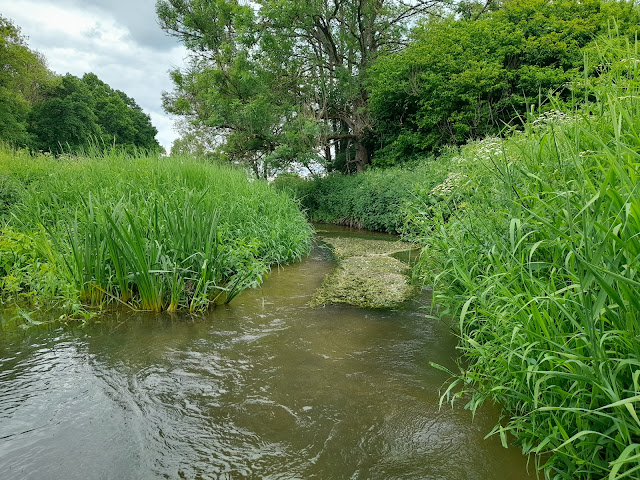 I met up with Jonathan who had caught three wild trout with a Mohican mayfly, and he took me to another good spot where the water flowed swiftly beneath a canopy of trees. ‘There’s always a trout in the pocket water’ said Jonathan, before he left me to it. He was right, as a trout raced up to intercept my French Partridge, and this time I struck successfully.

The trout all slashed at my mayfly imitation with the speed of a cobra and I missed many more than I was able to land. Just prior to pausing for a brief lunch beside the river I managed to successfully hook and land my third spotted jewel. 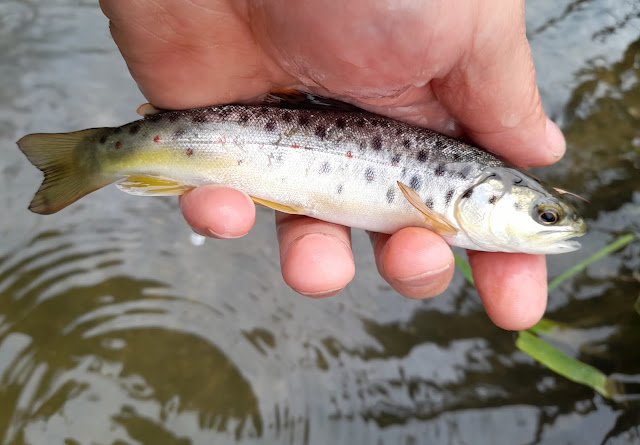 After lunch Jonathan and I drove a short distance upstream, where the river meandered through rich fields being grazed by cattle, overlooked by an enormous stately home which Jonathan mentioned had been in the same family since the 1700s. The river here is impounded between two weirs and as a result flows very sedately with some added depth. The club stocks brown trout into this relatively self-contained stretch and it wasn’t long before I enticed one to take my French Partridge. I was impressed by its strength and when in Jonathan’s long-handled net, its superb condition. We pondered whether it might be a wild trout because it was almost too fine to have come from a hatchery. 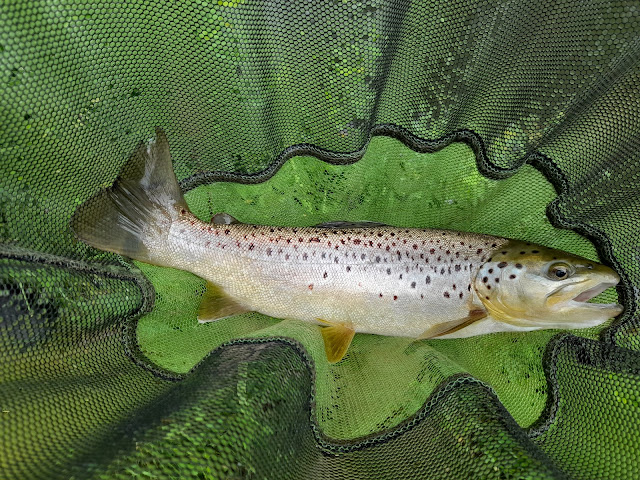 A little way upriver, where the river built up some velocity before a sweeping bend, I spied another rising trout, and it too took the French Partridge confidently. Here the bank was lower and after a brush with the nettles I could reach it with my scoop net and release it. Where before the river had been lined by trees and a short rod was needed, here the banks were higher and generally bare. A longer rod would’ve been welcomed to reach over the reeds and nettles. It spoke of the wonderful variation in fishing that the club’s members can enjoy.

Speaking of variety, the club’s upper beat, which Jonathan took me to in the evening, was truly sublime, and every bit the chalkstream I had wished for. Very near to the river’s source at Alton, with the A31 road perched high above the valley, the Wey is small, intimate, and pellucid. My boots crunched over the river’s firm chalk gravels as we forded it and walked downstream through an unused water meadow, where a deer bounded away from us in fright. A steady procession of mayfly lifted from the water and were met enthusiastically by Grey wagtails and wheeling Black-headed gulls (but noticeably not the trout). This was the water of my dreams, pretty enough to adorn the cover of any book devoted to the chalkstreams. I said to Jonathan that the Wey here reminded me of a mini-Itchen, which in hindsight isn't surprising because the headwaters of that river are a mere 8 miles away. 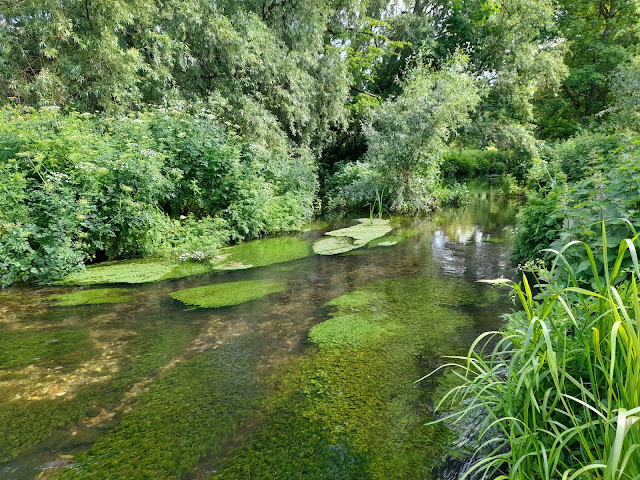 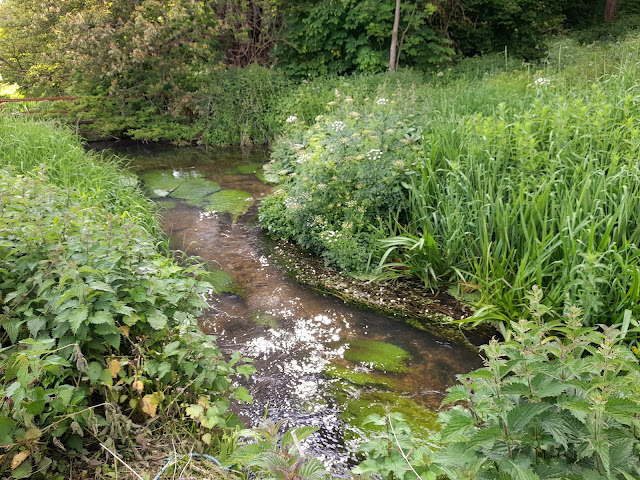 I enjoyed a final hour of solitude whilst wading up the river’s narrow course, with nettles and stands of blue-flowering comfrey towering over my head on both banks, drowning out all but the melodic calls of birds and the occasional thunder of aircraft gaining altitude from a nearby airport (Farnborough, I suspect). A small trout broke my reverie by slashing at my mayfly pattern, but it was too quick for me. Later, another trout made two attempts, somersaulting clear from the water, but I missed it on both occasions. I wondered if the trout were attempting to drown my fly rather than take it at the first attempt. Nonetheless, it was very fun, and I was sad to eventually leave. I could instantly relate to B.P. finding the peace he so valued in this tranquil river valley, far from the madding crowd. It felt truly special to tread in such illustrious steps. 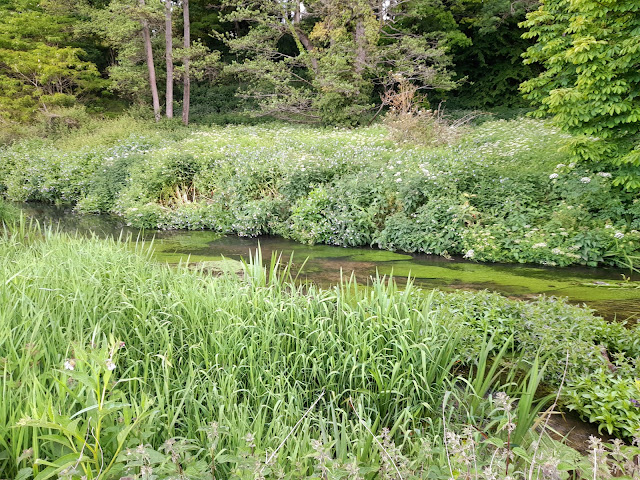 My heartiest thanks to Jonathan and the BPBFFA for hosting me for a very enjoyable day and allowing me to tick a beautiful chalkstream from my list.