The city of Salisbury is the meeting point of five chalkstreams. The Avon, Wylye and Nadder are all well known to fly fishermen. The Bourne is somewhat unacclaimed and isn't to be confused with the river immortalised by Harry Plunkett Greene in his book 'Where the Bright Waters Meet' (that Bourne is in the neighbouring county of Hampshire). The smallest of the five, flowing for only 12 miles, is the Ebble.

I find great appeal in small rivers and had looked forward to this trip, another kind invitation to join Bjorn, whose club has access to a small section of the river just upstream of the village of Coombe Bissett. On arrival, after risking life and limb by accessing the beat through a farm gate immediately off a busy road, I found a perfect miniature chalkstream with wonderfully wild trout.

The sun fought a constant battle with cumulus, and it was cold enough that I wore a fleece and winter coat. Bjorn and I walked to the downstream limit of the beat near the village, where the river flows beside a road. Vehicles passed by at slow speeds, and beyond the road stood an ancient grey-stone church. The flag of Ukraine fluttered in the breeze from the top of the church's square tower. The river looked gorgeous - its waters flowed translucently clear over pale gravel sediment in a wide, shallow pool. Wide, in the context of the Ebble, means something like 15 feet across. As Bjorn and I watched, a fish rose in the belly of the pool. It was a propitious start to the day. 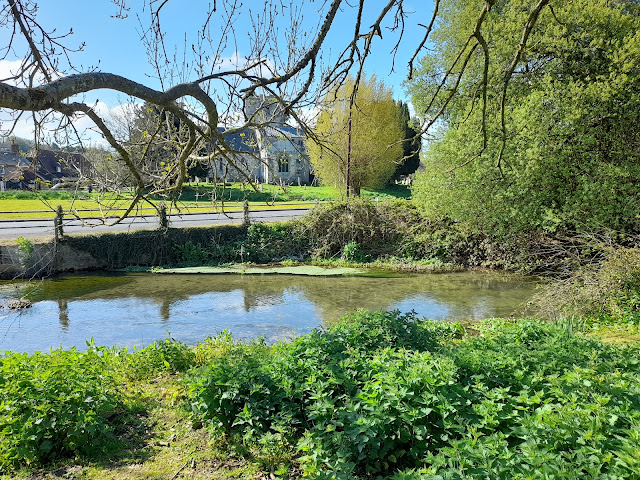 Two tall trees stood on our bank beside the pool, and the nearest to the river had low hanging branches which made the prospect of casting a fly into the pool a challenge. Bjorn offered me first dibs and I crept on my knees behind a tall clump of nettles, hoping the foliage would keep me concealed. I was still some way from the river's edge and needed to thread a diagonal back cast beneath the trees and then flick my fly forward onto the water. A first tentative flick was short, but my second landed well and the CDC olive was snatched by a little trout which was soon in my scoop net. The trout was no more than 6 inches long, a wild, dappled slip of life. It was a fantastic way to start the day and I joked with Bjorn that we could go home. 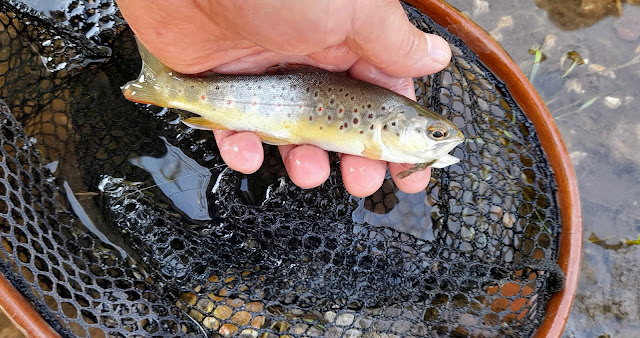 We crawled through the opening of a tunnel of trees, amazed at the sheer number of fish that we disturbed, taking turns to cast our dry flies into the likely runs without raising a trout for a time. Whenever we took a step forward we spooked hordes of little trout into a pinball frenzy. Eventually I tempted another fish to take my CDC olive and it was on for seconds before my line disappointingly went slack. The fish had momentarily piqued my interest because it felt much larger than the first. 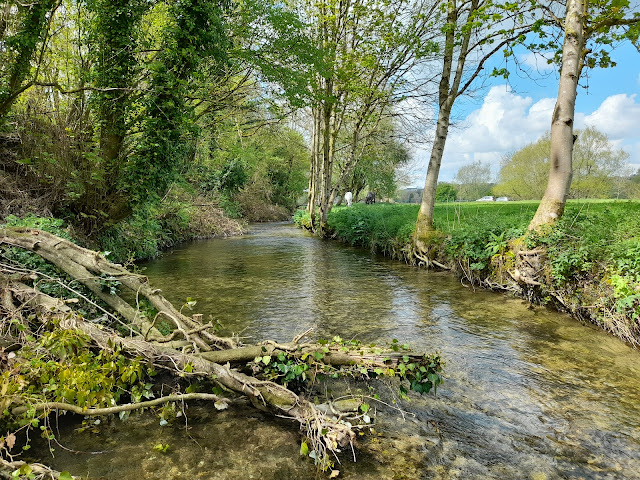 There isn't a fulltime riverkeeper on this beat but some very dedicated person or people have done an amazing job in creating wild trout habitat. A chainsaw had recently been put to good use, trimming, coppicing and hinging trees to lie prone in the water's edge. The large woody debris must provide excellent shelter for trout and encouraged welcome riverbed scour. The hard work showed in the sheer number of wild trout which evidently thrived in the water.

We took turns to fish a lovely long run of deep water, where the current flowed against the far bank and the water was smoky green, suggesting fish concealing depth. Nothing moved to our dry flies initially but seeing a hawthorn fly dancing in the air inspired me to change the colour of my fly. I switched to a black Klinkhåmer and enjoyed immediate success, raising a trout of around 9 or 10 inches from the head of the pool. 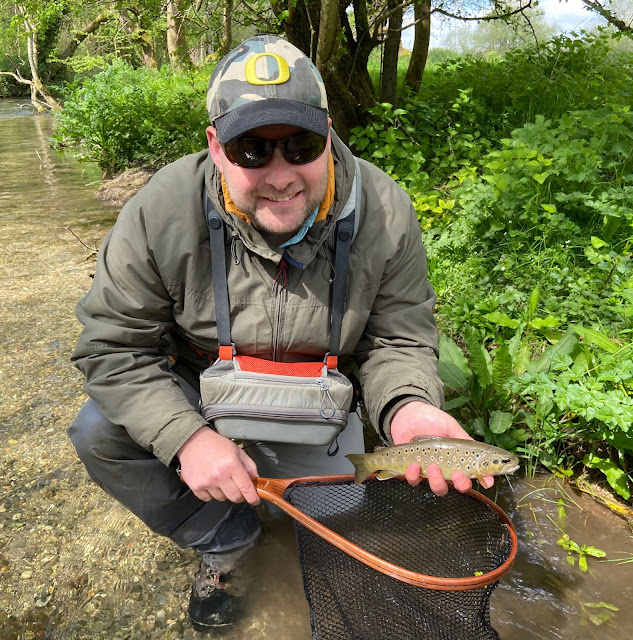 Following a quick meal at our cars, I said to Bjorn that I had no need to fish for the remainder of the day, or at least until he had caught a trout. Bjorn fished through a series of swiftly flowing pools where the gradient steepened, without any joy, until we arrived at a promising stretch of calmer water where the land flattened. Bjorn lost his fly to a tree and whilst he was replacing his tippet, he invited me to have a cast. I flicked my fly into the middle of the channel and a trout took it! I was very apologetic. The trout possessed subtle parr markings and its bronze appearance was quite exquisite. 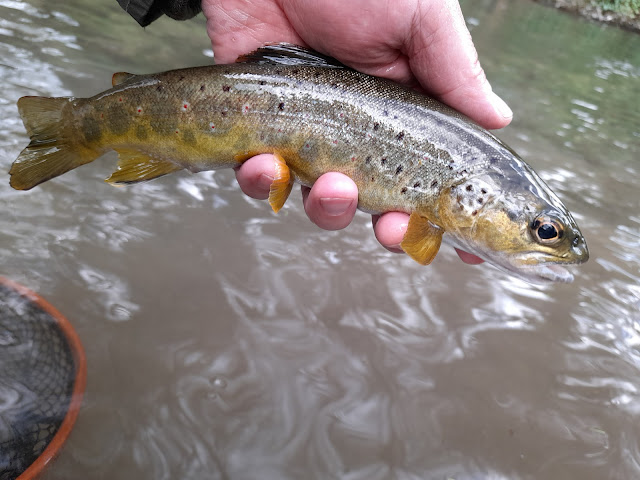 All was not lost for Bjorn, who sent his fresh tippet and fly to an alluring bubble line which flowed along the opposite bank, and a trout took his offering. Bjorn fumbled his line and struck too late, his chance gone. We knew the trout hadn't been touched by the hook so we rested the water a good 5 minutes. Bjorn didn't miss when the rise duly came a second time. I have never seen the man happier. 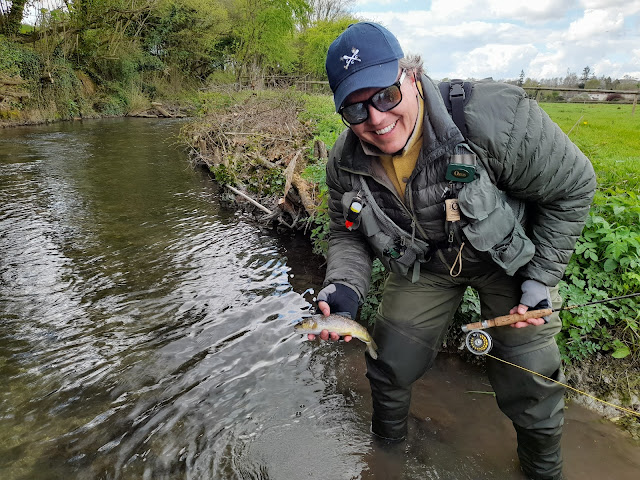 What a difference three weeks can make for the prospects of dry fly fishing. There was noticeably more fly life than had been the case only a few miles away at the River Avon. The trout were still generally reserved but seeing steady numbers of olives, hawthorn and some caddis at least put a spring in our step because Bjorn's club has a dry fly only rule in spring. The riverside trees were almost fully in leaf too, where robins, wrens and blackbirds made beautiful courtship music. Their chicks will hatch when the fly life is most abundant. It was very peaceful beside the river. 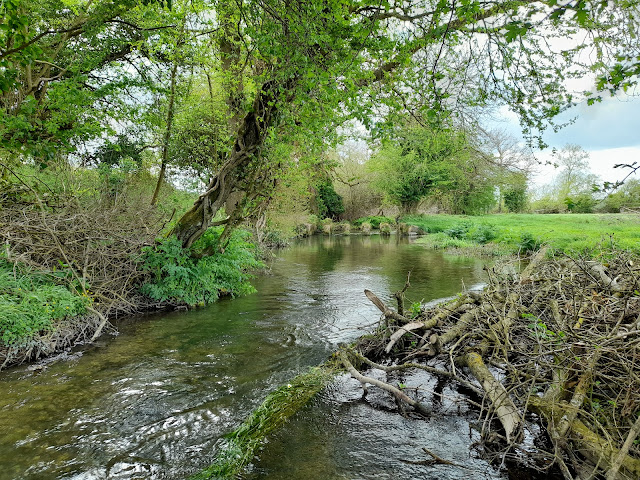 With Bjorn having caught his fish we separated for a while. Near the top of this modest beat I found the remnants of what was either a sluice gate or a bridge. Depressions in the adjacent meadow could have been an old track or water furrow. The water trickled between the old concrete pillars and emptied into the deepest pool of the beat. Two trout were rising in the pool and I crawled on my knees to the bottom lip of the pool where I could cast to them without drag being imparted on my line. My black Klinkhåmer was ignored by both. I watched the fish for a while, readying to cast a more subtle pattern, when a couple appeared at the river's edge on the opposite bank and peered into the water. When they noticed me, the woman told me that they were on the lookout for signal crayfish. The two trout sadly didn't rise again after they left.

As we walked back to our cars, Bjorn suggested that we each have a final cast in the pool beside the car parking. I had already removed my fly so he handed me his rod. I flicked his fly into the water and a fish came up and lazily consumed it. It transpired to be a grayling and as I released it into the water, my mobile phone fell from my chest pack into the river. The model isn't water resistant so my heart sank. The phone was kaput for a week and I feared the worst, but today it magically charged and seems to be ok (fingers crossed). The week of abstinence made me realise, somewhat depressingly, how closely our lives are now intertwined with our smartphones - for instance I couldn't make an online bank transfer without my mobile authentication app. Smartphones offer much convenience, of course, but also much distraction from the things that really matter. 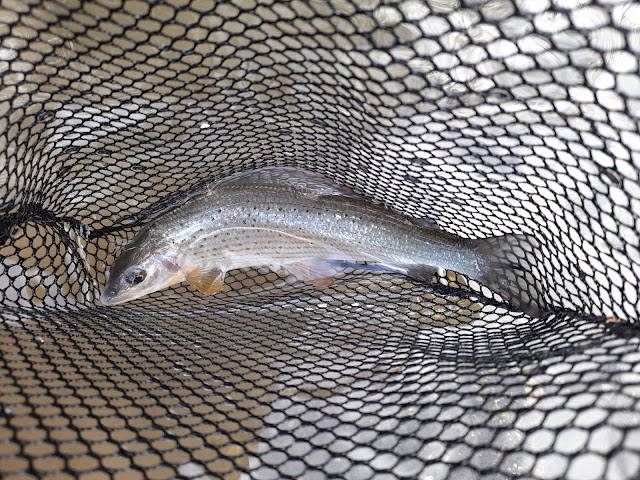 I followed Bjorn's car to the A303, cresting the unspoiled chalk hills of Wiltshire in the evening sunlight. Much of the land was prettily covered in yellow-blooming rapeseed. We passed Stonehenge along the way. Seeing the ancient stones always fills me with a deep sense of reverence. Even with my worries about the parlous state of my phone I couldn't help but feel lifted by the countryside vista and the fresh memories of a very rewarding day's fishing. The Ebble, with its little trout hardwired for survival, provided something close to my idea of what chalkstream fishing should be all about.