As soon as Slovakia was added to the UK's green list for travel, my partner and I made plans to visit the country and introduce our child to his Slovakian grandparents. It would be our first trip abroad since the start of the pandemic. In the week before our flight the newspapers had been reporting on long queues at Britain's airports as the bureaucracy of Covid red tape took its toll. The prospect of passing through an airport and flying with an active ten month old child filled me with dread, but I needn't have worried, because Finlay was very well behaved and the delays proved to be minimal.

I knew next to nothing about the trout fishing in Slovakia, which seems to go largely unnoticed by international anglers (contrast it with the wealth of information available about the country it is often confused with - Slovenia). I emailed a fishing guide (Andrej Polcic; Slovakian guide) and arranged to meet him in a town in the foothills of the mountains in the north of the country - but only after I had negotiated a day's fishing with my partner. She drove a hard bargain, and my day's trip became a holiday booking in the mountains for a couple of nights, with the grandparents in tow, and a van rental to accommodate us all. Secretly, I was thrilled!

As we followed the motorway north, two things struck me. I realised that Slovakia is a stunningly beautiful land. Topographically it is a land of halves. The north of the country is dominated by the imposing Carpathian range of mountains. The Carpathians run for 1,500 km through the heart of central Europe and the tallest peaks of the range are found in Slovakia. The mountains descend in scale as you travel south from the frontier with Poland, from the High Tatras, through the Low Tatras, and then through the forested foothills which sweep south and seem to have the ruins of a castle on every available clifftop. The south of the country is largely a flat expanse where the vast, fertile floodplain of the mighty Danube river dominates the terrain and serves as the border with Hungary. The rivers and streams which flow south from the mountains eventually drain into the Danube and because of that I was told that Huchen, otherwise known as Danube salmon, are endemic in some of the country’s rivers (but are significantly threatened by water impoundment schemes).

Second, Slovakia is on a major trade route between the east and west, and the sheer number of trucks utilising the motorway was mind blowing. Truck after truck after truck lined the slow lane. It was something my guide would later mention too, when he said that to provide locals with some respite, a law prohibits trucks from using the motorway on the weekends.

My choice of quarry was brown trout and Andrej told me to meet him in Liptovsky Hradok, a small town nestled in a basin between the High Tatra range in the north and the Low Tatra range in the south. I met Andrej at the town square at 9am and he whisked me off in his car along a heavily potholed road to a remote location in the mountains, which I promised to keep secret. We eventually pulled off the road and parked in a steep sided valley of spruce forest, and when the engine was switched off I could hear a river gushing noisily some way below us at the valley floor. Soon after we had parked, a man approached in a car and spoke to Andrej in Slovakian. It became obvious that he was asking to see our permit. Papers were pointed to and the man was placated and drove off. It seemed a well run affair.

The air was cool in the shade of the tall spruce trees because the sun had yet to traverse the mountaintops. We walked down a gravel track to reach the river in the valley below. The steep mountains and verdant forest seemed to enhance the sense of remoteness I felt with each descending step. When I eventually saw the fast flowing, crystal-clear river through the trees, my breath was taken away. It was exactly what I had in mind when I had made the booking with Andrej. 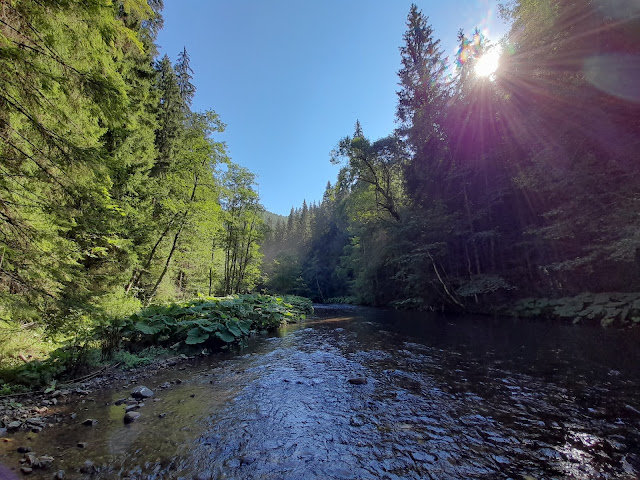 We crossed a bridge and followed a muddy logging track upstream. Within metres of the bridge Andrej pointed to a fresh set of bear tracks in the mud. It felt invigorating to know that such an iconic and rare European mammal was nearby, the notional danger adding an alluring ingredient to an already heady mix of discovery. At intervals in the day Andrej would let out a piercing whistle to alert any wild animal to our presence. He mentioned that he was more concerned by the prospect of running into a wild boar than a bear. 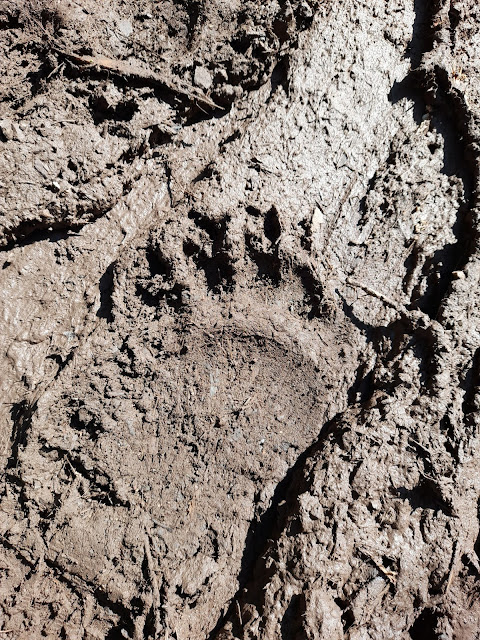 Andrej is passionate about fly fishing and trout, and he spent 4 years guiding in New Zealand. We spoke animatedly about our mutual interest and past visits to the Land of the Long White Cloud. In between our exchanges, Andrej told me that I would use his unique "Slovakian" method of nymphing. I observed his rig in surprise, for it consisted of a leader only one metre long (three feet). A nymph was tied to the point and one on a dropper. A foam indicator was attached to the leader where it met the fly line. Surely the trout would spook at the presence of a fly line so near to the flies, I asked? Andrej assured me his system was well tested and successful. And so it proved. In an exercise of frugal simplicity I hooked and landed two fine brown trout from the very first pool. The trout were gorgeously marked specimens, and Andrej, who was bursting with pride and some relief I'm sure, remarked that they were a very healthy size for this particular river.
What really struck me was the speed at which it was necessary to strike whenever the indicator checked. These fish were lightning fast. A second was too long, for the strike would meet with no resistance. I needed the reflexes of a mongoose and it was something that improved as the day wore on. I was using one of Andrej's rods, a fast action Greys, and Andrej had to say "Justin, you're a strong guy, just go a little more gently." I use slow action rods at home so I am more attuned to employing a powerful strike. You have to move a soft action rod a long way to make it respond whereas Andrej's rod needed only a flick of the wrist to set the hook. When I made this small correction, my strike success improved. 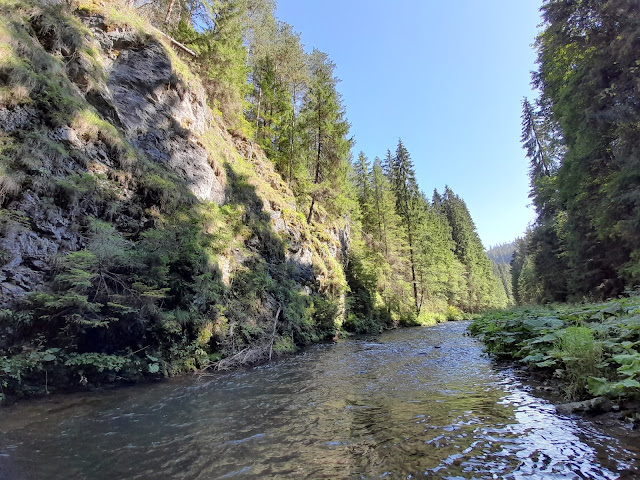 I caught trout almost always from the deeper pools where they were hugging the riverbed and always on the heaviest point fly, a black bead head nymph. In the deepest pools we added an even heavier third fly to Andrej's rig. We realised that the trout were being a little lazy. The fly had to be led to their nose. We put it down to the very cold water temperature but it also meant that when they were hooked, they fought with a ferocious cold water energy. The deep undercuts scoured at the base of cliffs were prime places to find obliging trout. 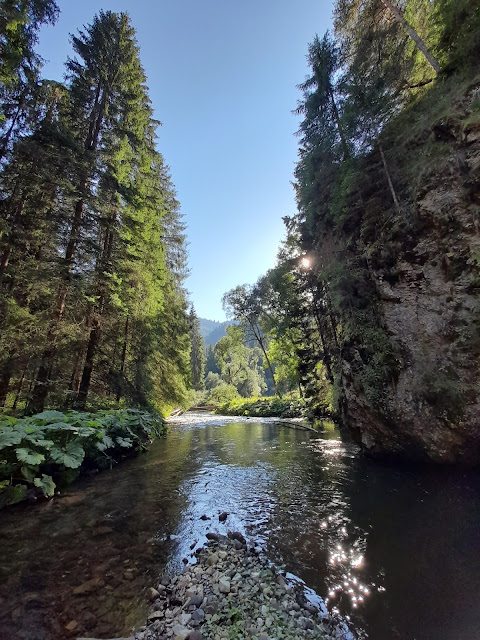 I did well in the morning but the hours before and after lunch saw little action. Then, in the afternoon when the sun at its zenith cleared the tall spruce trees and warmed the water, there was a brief hatch of duns. This enlivened the trout which began to lift in the water and take the smallest dropper. One or two even slashed at my foam indicator. We lost count of the trout I caught but agreed the number was at least 20. The trout typically measured around 12 inches and the largest was probably 15 inches long. I mention their size only as a record of information, because in such a pristine and soul nourishing place, the size of a trout is an insignificance. 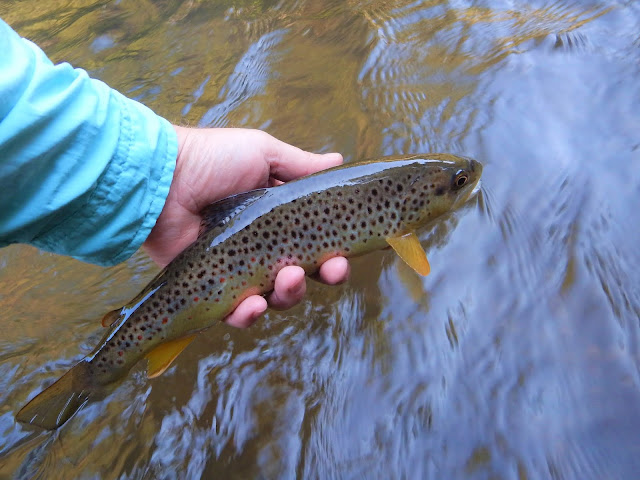 I hooked a fish in a chute of deep, fast-flowing water and when it became visible, Andrej excitedly exclaimed that it was a grayling. His mood changed to one of concern. Andrej prizes grayling more than trout and was keen to explain that grayling are more delicate than trout. It was the only grayling that I would catch all day.
There'd been a great storm some three weeks before my visit, and many trees had come down in the ensuing flood. Only one section of the river seemed to have been affected, and we had to negotiate our way around, over and beneath huge fallen trees which lay across the river. Andrej mentioned that it had completely changed the character of the river. Old pools had gone and new pools had formed. I caught perhaps the finest trout of the day just upstream of a fallen tree log and had to fight it hard to prevent it from racing away beneath the log and a certain line break.
My 7 hours with Andrej came to an end far too soon. We left the river and climbed a hill until we reached a bicycle track and then followed the path back to the main road. Whilst walking, a loud gunshot broke the still air and made us both jump. The shot was fired very nearby and Andrej broke out into more whistling. It's hunting season in the mountains, and neither of us fancied being confused for a deer. It was the first man-made intrusion of my senses in many hours and the comprehensiveness of my escape from the world dawned on me. My mind had cleared in those hours and the weight of work and family responsibilities had been lifted. There is no price to place on such days.
It felt good to have travelled abroad again after a fair old while of being cooped up in mainland Britain. I saw enough of the fishing in Slovakia to know that I must visit again and explore it in more depth. My guide told me of rivers where grayling proliferate and others where rainbow trout have become naturalized and grow to considerable proportions. It seems there is a great deal of variety on offer in the country and it’s an exciting prospect to return to in the future.
Labels: Slovakia