I woke up early on Saturday morning, and set off westwards to Wiltshire to fish the River Nadder at Compton Chamberlayne. The Nadder is a tributary of the Avon of Frank Sawyer and Oliver Kite fame. Like the Avon, mention of the Nadder always seems to be followed by the question 'is it a chalkstream?' It is a chalkstream, undoubtedly, but one graded a "mixed geology" chalkstream by experts. It flows over chalk where the main fishing action takes place but springs to life in the sands and clay beyond the chalk. As a result it carries the slightest tinge of opaqueness – not very much – but it can colour more severely after heavy rainfall. It is deeply incised in the ground, with a series of serpentine bends slowing its flow and creating tremendous sequences of riffles to mysteriously deep pools. It all made for a very interesting day's fishing.

The drive was long and took me two and a half hours. When I arrived it started to rain and I enjoyed a final cup of coffee beneath the shelter of my car's rear door. Fishing is only allowed from 10am on the estate, and with 25 minutes to kill I put on my raincoat and went off to explore the nearby river and rudimentary hut. A list of the beat's rules was pinned to the hut and I noted the catch and release limit of 8 trout. I prefer to fish with a catch limit on a chalkstream. It allows for chalkstreams to be fished in the proper spirit - with patience, studied observance of the water, and targeting each fish in turn. I liked what I saw of the river and the very tranquil meadows through which it flowed, and I returned to the car to make up my rod, anticipation increasing all the while. 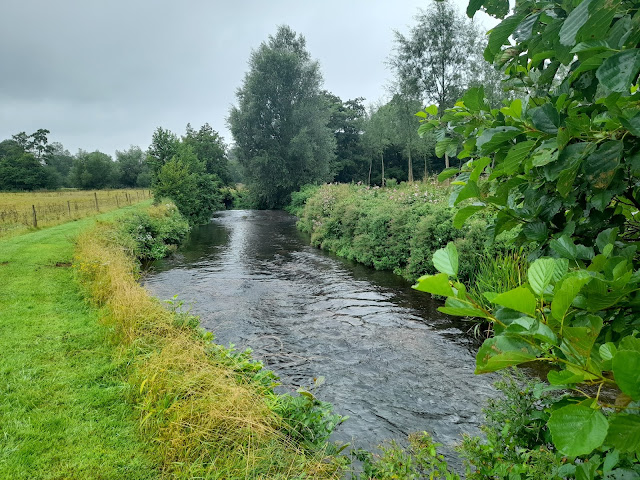 I caught my first trout within minutes. No more than 20 metres downriver from the hut I spotted a gentle rise. I paused and watched the trout rise again. I kept low and crept past it, downstream, and then cast a size 16 Parachute Adams to the trout which rose and took the fly confidently. It was a propitious way to start proceedings. The bank was too high for my net so I shimmied down the slope and into the water to net and release the trout. 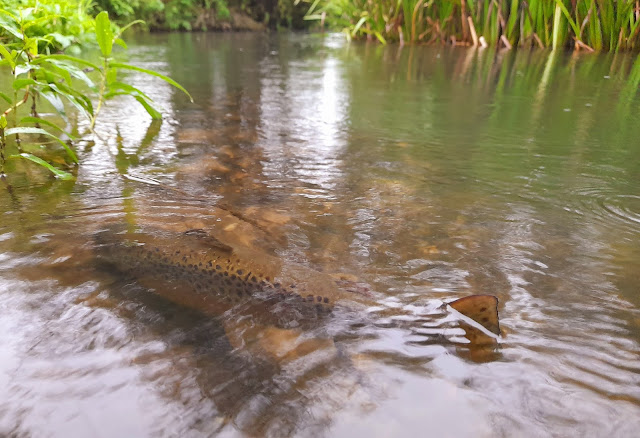 I walked to the bottom of the generous beat where the apex of a hairpin bend in the river marked the boundary between my beat (three) and the beat downstream (two). A trout leapt clear of the water on the far bank, on the other side of a strong current entering the pool. I knew a dry fly would be futile, because it would drag instantly upon touching the water, so I switched to a bead head Hare's Ear. I cast the nymph into the tail of the pool upstream and worked it into the alluring drop off on the far side of the current. As I couldn't see the fish I had tied a small wisp of sheep's wool to my leader to serve as an indicator, which I watched like a hawk. When the indicator bobbed beneath the water I struck and felt the magical weight of a living, fighting lump of trout. 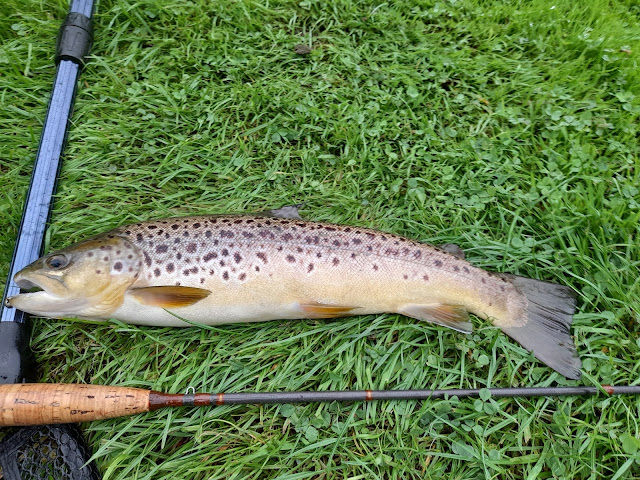 In the next run upstream a glint of silver caught my eye, and I locked on to a trout grubbing on the riverbed. It was a difficult cast because a willow tree blocked my cast upstream of the fish. I could only cast to the side of the willow but nevertheless watched as the trout moved some way to intercept my Hare's Ear nymph. I struck on sight and was elated to feel the line tighten into the weight of the fish. The trout surfaced and I could tell it was a portly rainbow, which took me by surprise. It fought hard, with little room to manoeuvre in the narrow reach, eventually succumbing and entering the folds of my net on its side. For the third time I slid down the bank into the water to net the trout. My fly had parted from the heavy trout and when I collected it from net, I noticed that the hook had snapped off at the shank. 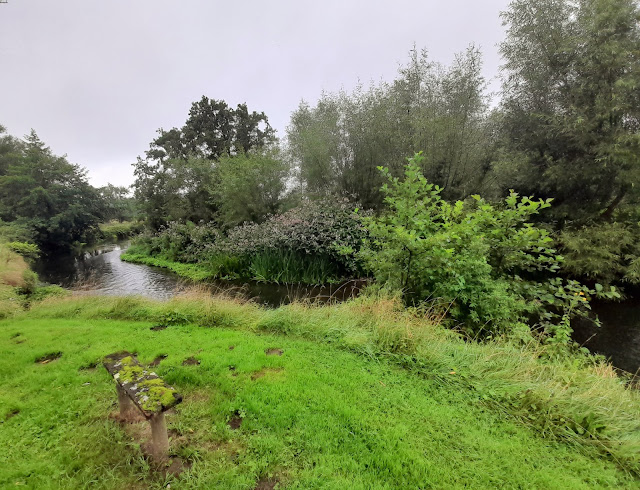 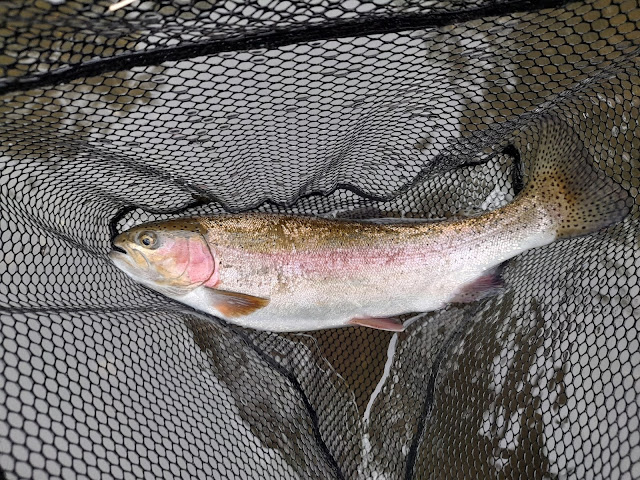 I had flown out of the blocks and needed to slow down to enjoy a full day. I pursued a selective approach, walking up the river slowly on the lookout for a rising fish, and foregoing some lovely looking water which was perfect for a nymph.  I found one in a narrow section of the river no more than two metres across, holding mid-water beneath a willow. I crept into range on my knees and watched it lift to the surface to take small somethings and turn on its side to take nymphs with some consistency. It was a challenging cast, but every now and again I'd land the fly perfectly and watch the trout respond by ignoring it. I ran through fly patterns, trying dries and nymphs, going smaller and larger in size, without any success. And then I witnessed the trout rise to a pink flower bud which floated over its nose. It swiftly disgorged the item, but it made me think about a beetle pattern in my fly box which was a very similar size and shape. I'd actually never caught a trout with a beetle before, despite trying, so I tied it on with some doubt as to its efficacy. When the fly landed, the trout took it much to my surprise. It was another rainbow trout. I really enjoyed unlocking the puzzle of its capture, even if it needed an errant flower bud to provide the clue. 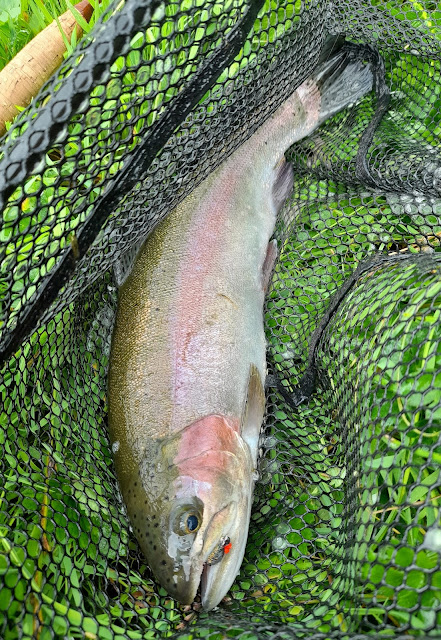 I caught two more trout before eating a sandwich for lunch at the hut. Both were caught with an olive shrimp, the first spotted and nymphed on sight alone, the second taken speculatively from a delightful run of fast water. I suspect the latter was a wild trout. My retelling reads of a flawless morning's fishing and it shouldn't. Along the way I hooked other trout and lost them, and spooked several more with a heavy footfall or errant cast, and gave up on others that simply wouldn't budge. Whilst I ate my lunch at a wooden bench and table outside the hut, I watched an enormous chub in the pool adjacent. It swam upriver and I came to it after lunch, and tried to catch it but without any joy. Chub can be very finicky at times. 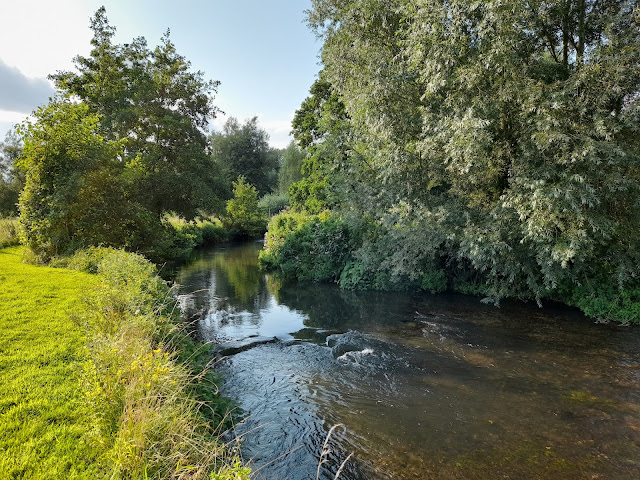 There was only a short section of the beat upstream of the hut before I came to the boundary with the next beat. There was a tempting pool just ahead with a trout rising in it and I had to summon all my powers of restraint to turn back. My blood was up and I wanted to finish in style, having just caught  my 7th fish, a brown trout of 19 inches. This trout stands out from the others not just because it was probably the largest, but also because of the circumstance of its capture. I had spotted it on the opposite bank, lying mid-water in a seam beside the shallow head of a pool. I spotted it in the murky water only because it had moved vigorously to take some prey. I cast my shrimp but of course the current took hold of my line, imparting significant drag before I could mend the line. No matter, the trout turned and followed my shrimp downriver and slashed at it aggressively, its shovel-like tail breaching and slapping the surface. I missed the take in the commotion but waited until the trout settled, then moved as close to the trout as I could so that I could keep as much of the line off the current. Again, it was only after the shrimp had passed the fish when it sprang into action. It turned and pursued the fly downstream as if it might never see another meal in its life. This time I set the hook and the mystery of its animated behaviour was perhaps explained when I lifted its hefty bulk into my net. Within the net I found a minnow no longer than my pinkie finger. My intervention was most fortuitous for the little minnow which I suspect had recently been swallowed! 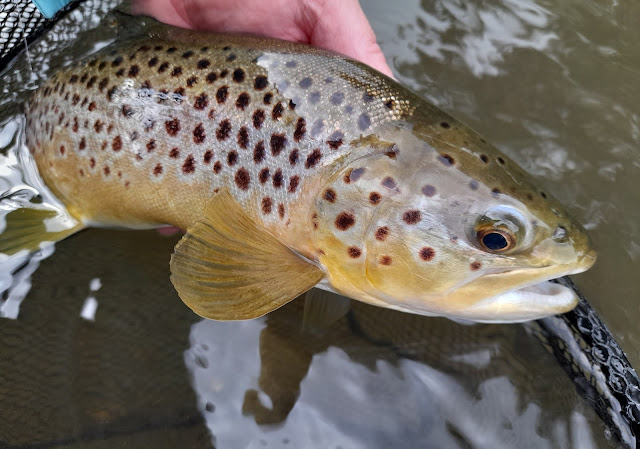 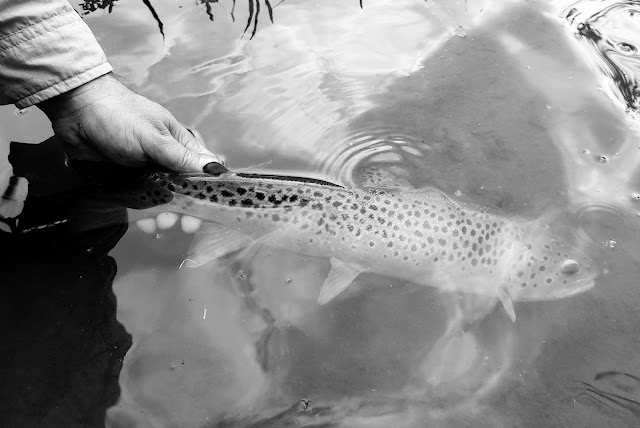 With one fish to go I walked to the very bottom of the beat again. I met a man fishing the beat downstream. I had seen a different person earlier in the morning, from a distance, and we had waved at each other. The gentleman told me it was a Lady of the nobility who had suggested to him that I must be a poacher. What gave her that idea, I asked? The colour of my light green shirt! I am not a superstitious person by nature, but I consider this specific shirt to be something of a lucky charm. I will not wear another whilst fishing, until my luck breaks, even if for some bizarre reason it provides me with the appearance of a poacher! We spoke together for an hour, the time running away from us. I pointed out a snake swimming across the river, which we both agreed must have been a grass snake, but subsequent research has thrown up the alluring prospect that it was a slow worm, which is not a snake at all but rather a legless lizard. What I think made it a slow worm was its glossy pink/bronze sheen from head to tail. The gentleman hadn't caught a fish all day with a dry fly and he asked if he could observe me fishing. I hooked three grayling, netting two, whilst showing him how to fish with a nymph, before the Lady approached to chastise the man for speaking as loud as a foghorn and disturbing her fishing! 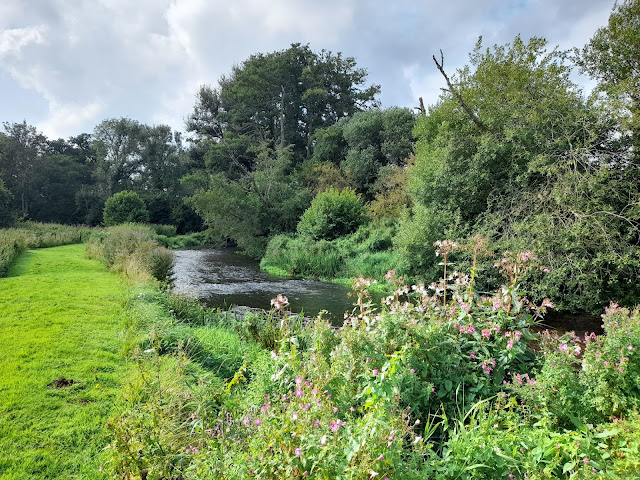 My final trout was a rainbow. I watched it feed beneath the surface from just in front of the reeds on my bank and then hooked it on sight with an olive shrimp. I have grown especially partial to sight nymphing and think it provides just as much pleasure, if not more, than watching a trout take a dry fly. Nymphing is only permitted on this beat from July and I was grateful for that allowance. 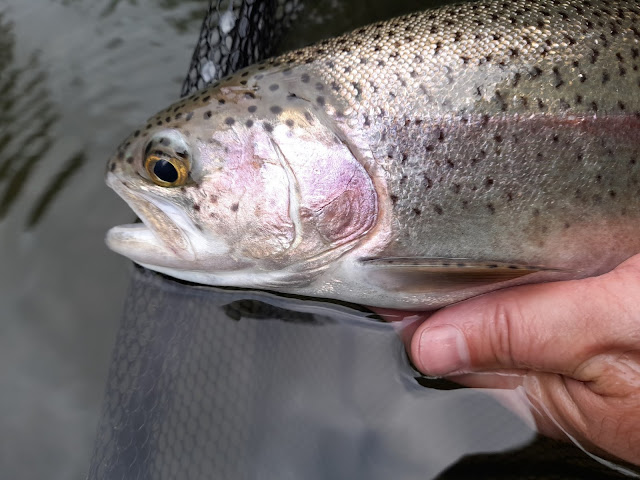 I thoroughly enjoyed my experience of the Nadder. The river is superbly maintained by the keeper and in those tranquil surrounds I became lost in fishing thoughts and nothing else all day, which is all I ask. I hit the road at 6.30pm and was home by 9pm. A long but very fulfilling day.