The River Dever at Bullington is an exquisite example of a chalkstream. Its water is so astonishingly clear and gentle-flowing that I could observe the behaviour of its resident trout in microscopic detail. This really was a huge jump up the chalkstream crystallinity charts. With a catch and release limit of eight fish, it allowed me to take my time and pursue a selective approach, by stalking individual fish. It was a novel and deeply satisfying experience.

The weatherman had forecast a damp day, and I had driven through a patch of heavy rain to reach the river. Dark, ominous clouds hung low over the Test Valley and threatened to unleash their load at any moment. The ground underfoot was spongy and wet from recent rains. It rained very little in April and the land was due a good soaking.

Crossing the narrow bridge to my beat I spotted many large trout in the water, both downstream in my beat and upstream of the bridge in the next. My expectations soared. 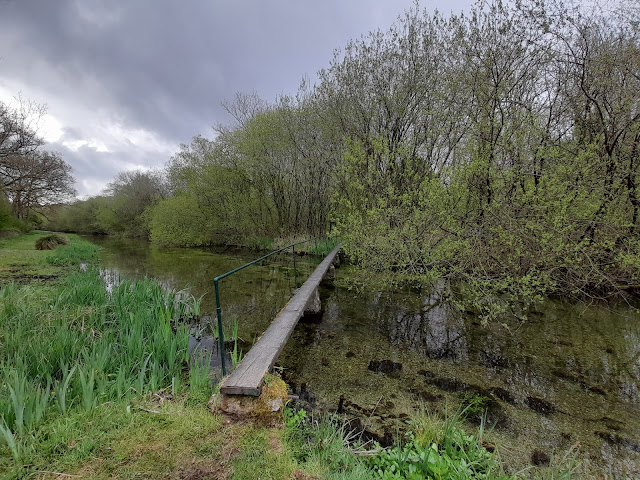 The facilities were top notch. I enjoyed one final cup of coffee in the hut, quirkily named "Buckingham Palace", whilst I read the fishing return book and viewed the photos on the wall. In one image was a large trout with the hind legs and tail of a rat protruding from its mouth. The daddy long legs fly responsible for its capture was proudly pinned to the top of the photo. 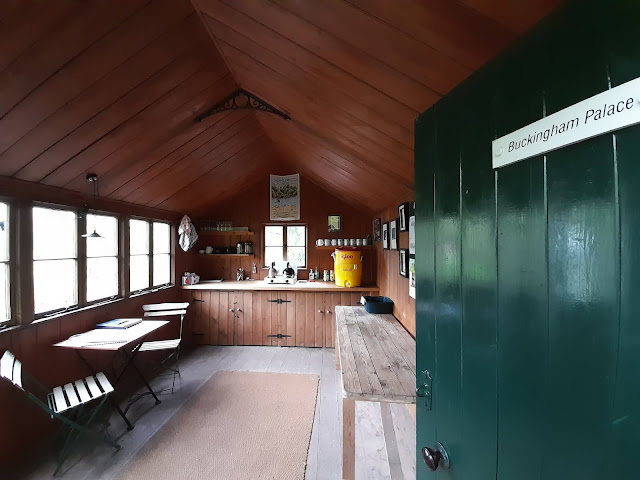 I ambled leisurely down to the bottom of the beat, still very much astounded by the beauty of the place. I startled a heron into ungainly flight midway down the beat and took a moment to watch it settle on the upper limbs of a tall tree. They are very shy birds. A corridor of trees and wild vegetation grew on the river banks, separating the river from the farmland beyond. The hand of man showed itself in the freshly mown pathway on the true right bank and the pruning of tree branches here and there. It looked a very well maintained beat, a credit to the riverkeepers.
At the lower limit of my beat I watched a large fish near the opposite bank swaying contentedly in the current. It seemed too early for a dry fly so I tied on an olive shrimp, my chalkstream banker. I cast the fly into the water a little upstream of the fish, and watched as the trout turned to its left (towards me on the true right bank) and opened and closed its mouth. I struck and when the trout recoiled I felt the pleasing resistance of a very hard fighting brown trout. Sight nymphing rivals the rush of watching a trout rise to a dry fly in my books.
A quick word on the quality of the stocked trout in this beat: they were some of the best in appearance I have encountered and to a fish they fought with great vitality. All of the trout I caught were between 16 and 18 inches long, around 1½ to 2½ lbs I'd guess, presumably recent graduates from the same class at the hatchery. 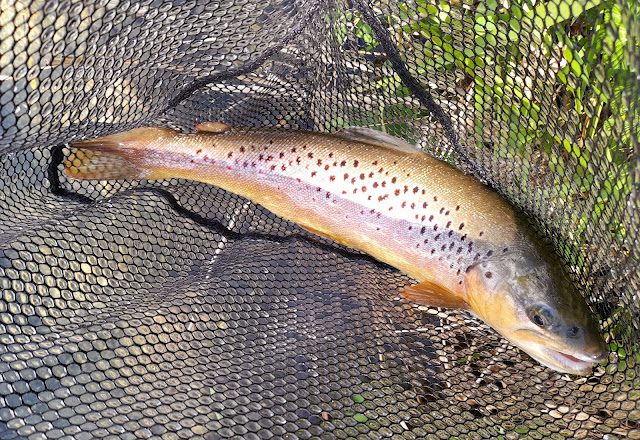 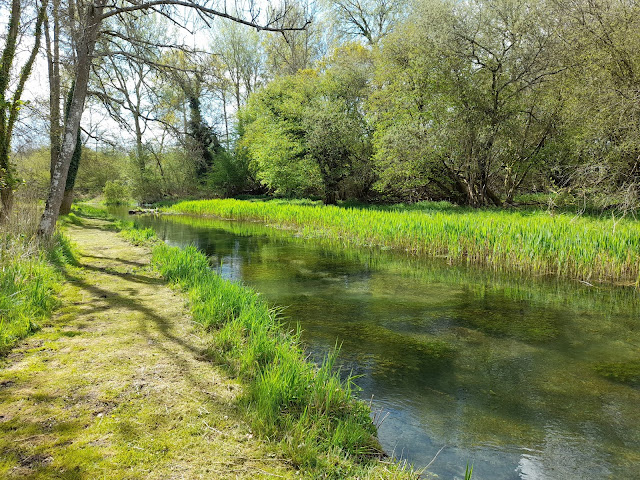 With the discipline of a monk I walked past an extremely large grayling (still out of season) and around a left bend in the river at a snail's pace, because I could see several large trout in the water ahead. I heard the gentle suck of a rising trout, and then saw it, right up against my bank, lying just behind a clump of trailing ranunculus. I probably wouldn't have seen it had I not heard it. I replaced the shrimp with a parachute Adams, and watched as the trout nonchalantly broke the surface and took the fly. I waited a second and struck, thrilled, as I felt the line go taut. I was on a roll.
In the same pool I let my olive shrimp pattern drift past a trout's nose and struck at the barely perceptible turn of its head. On the bank I admired a very plump trout, with spotting unlike the first two. I sat on a nearby wooden bench and basked in the warm sunlight, extremely pleased with my start to the day. 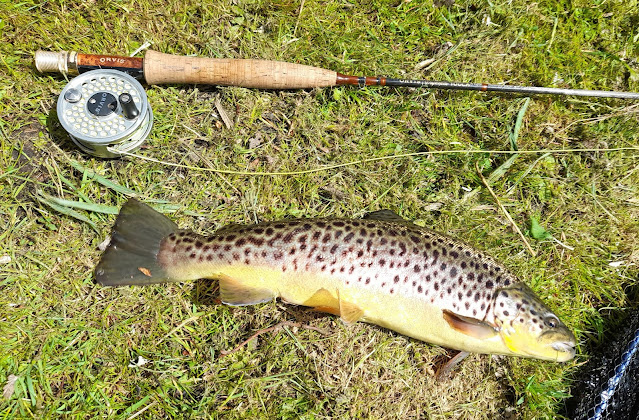 Whilst dealing with the last fish, I had noted another rising a little way upstream, its silhouette starkly visible above a patch of white gravel. It looked large. I moved into position and cast a small olive paradun to it. As the fly drifted into range and I held my breath, another trout, smaller and unseen until then, shot sideways from the shadowy margin of the far bank and grabbed it. It was still a good 16 inches long, and very welcome, but it received a very rude awakening for its greed. 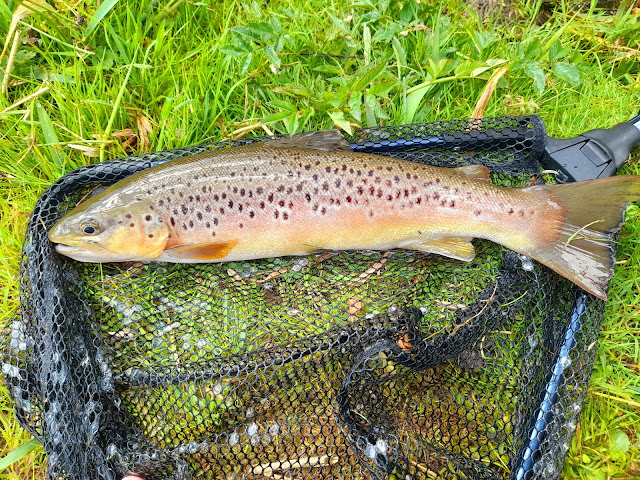 With four fish by noon, I decided to venture back to the hut to eat lunch. I was growing hungry and, hopeful of a rise in the afternoon, I wanted to try and spread my catch limit over the full day. By now a troublesome gust was blowing down river, rippling the water's surface in fits and starts. At the first right bend in the river, pointing me into the teeth of the southerly wind, I encountered some deeper water. A brief lull in the wind allowed me to peer into the water where two fish were holding on the gravel bed. A fractionally smaller trout lay about two feet in front a larger fish. Given the rippled surface of the pool I  attached a small amount of sheep's wool to my leader to act as an indicator. The olive shrimp was ignored in successive casts so I tied on a heavier pheasant tail nymph, and right where I believed the larger fish to be, the indicator was pulled beneath the surface. When I struck, the brown trout leapt from the water, twice. I suspect the smaller of the two trout may have taken the fly, but it mattered not. 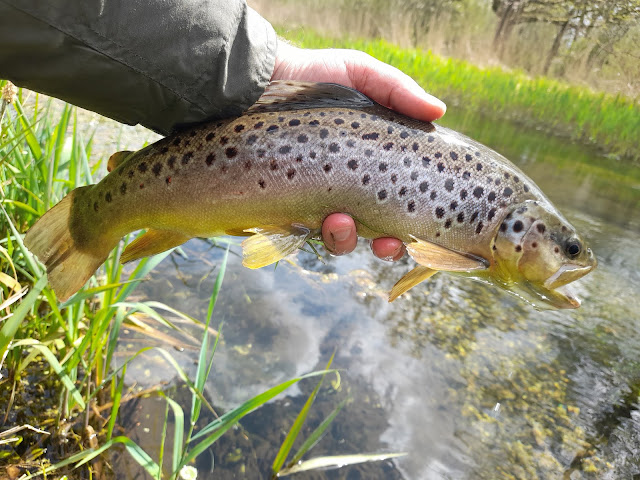 I walked past some gorgeous water on the way back to the hut, everything the chalkstream of my wildest dreams. This middle section seemed to hold fewer fish though. I noticed that the trout tended to congregate at the upper and lower limits of the beat, where the water flowed with a little less zip. 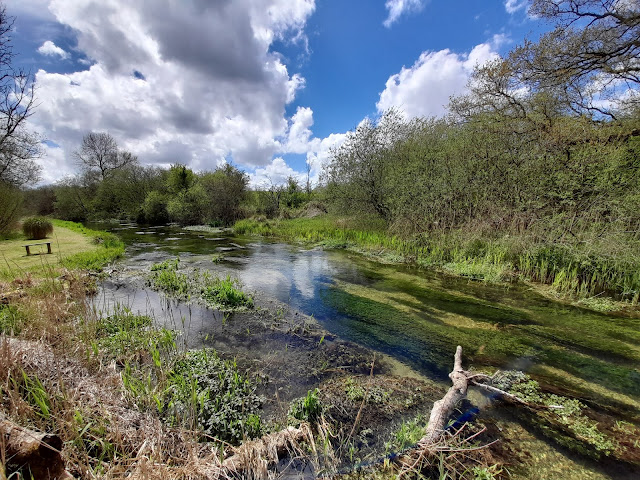 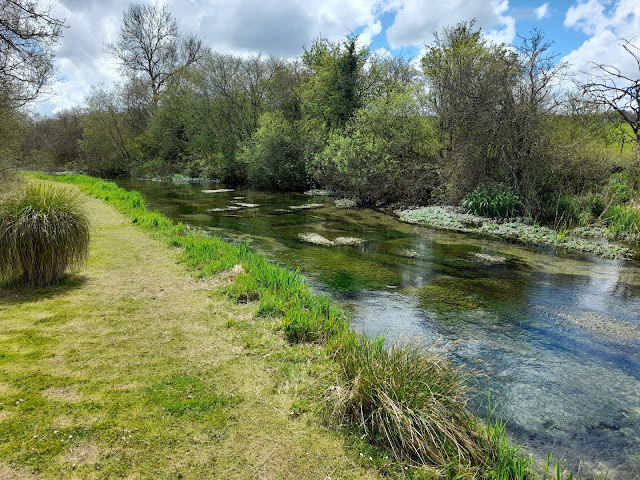 At the hut I ran into a fellow with a fly rod. Vexed, I asked him if there had been some mistake, as the beat was mine for the day (fortunately said very politely). Robin, an auctioneer from London, informed me, equally politely, that it was a two person beat. I'd missed that detail. In fact, it was the first occasion I'd shared a beat with a stranger. We swiftly reached a gentlemen's agreement: after lunch, Robin would take the lower half of the beat which I had already fished, and I would take the water near the hut which he had fished in the morning. We had a genial chat about fishing, and exchanged flies - I gave him one of my olive shrimp patterns and he gave me a daddy long legs with a bead head and rubber legs "just in case nothing else worked".
I had three trout left to catch in the afternoon and a very long and productive looking piece of water in front of the hut. Just before a footbridge, a tree on the true right bank covered about half the water's width in shade. Beneath the lowest of its branches I spied the giveaway tail of a trout. It was an obvious place to find a trout. With a low side cast I sent an olive emerger beneath the tree limbs and the trout took it confidently. I played the fish hard to keep it from running under the bridge. It was a very yellow fish, long and slender. Its anal fin had a white leading edge which is a common feature in wild trout but the first time in memory I have seen it in a stocked trout. 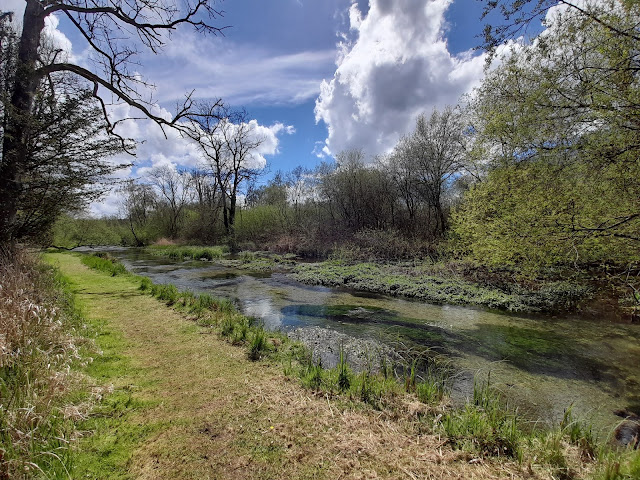 Upstream of the bridge three trout were holding in a triangle. The rearmost took a nymph on about the fifth or sixth drift past it. Once again I struck at the sight of the trout closing its mouth. This was turning into a fine day indeed. 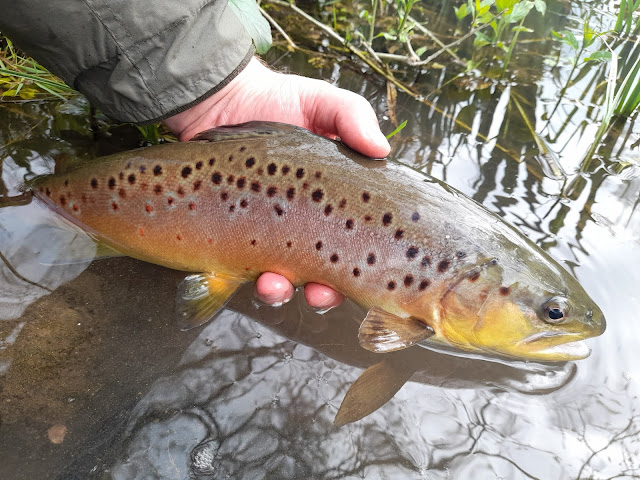 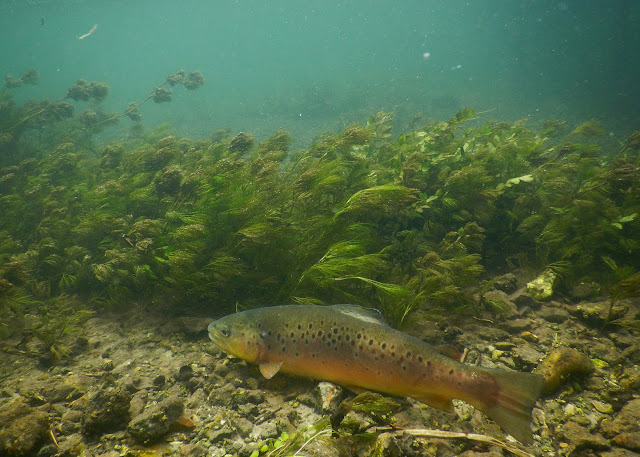 A stoat scampered across the footbridge just at the moment I turned to look downstream. It's the first time I have seen one. I'm confident it was a stoat and not a weasel by the bushy black pom-pom on the end of its short tail. I marvelled at how a creature so small could prey so successfully on another, the rabbit, three times its size.
Before me was a long, sumptuous stretch of water in front of the hut with lots and lots of fish. It was all that remained of my beat. A truck pulled up at the hut and a young lad emerged. I flicked my nymph into the water and hooked a trout, which instantly leapt from the water and dislodged the hook. Charlie, the assistant keeper, had ambled over by then and sympathised with the loss of what looked to be a good fish. We had a good chat about the water and his job, which he was only 4 weeks into. 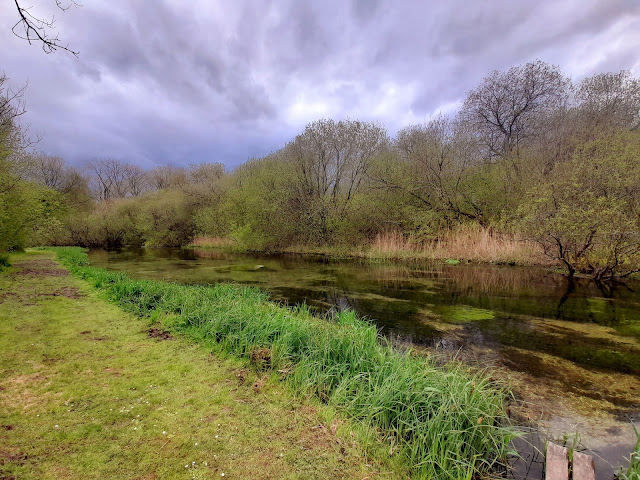 It started to rain quite heavily as I said goodbye to Charlie. I walked the short distance to the footbridge at the top of the beat, where I had been impressed by the trout on show earlier in the morning. I could see the shapes of fish in the water, but the rain drops obscured any chance of seeing them take a nymph so I tied on a small wool indicator. On my first drift the hazy silhouette of a trout lifted in the water and took the wool indicator! Too lazy to change set-up to a dry fly in the rain, I cast the nymph to the same trout again, and this time the indicator was plucked beneath the water as the nymph was taken. I had reached my limit. 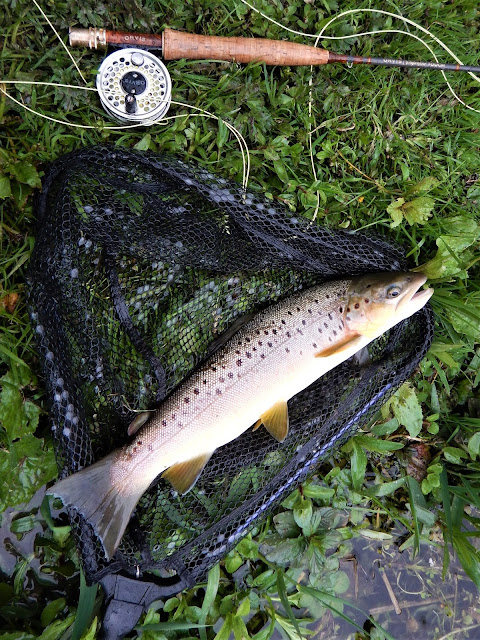 On reflection, this was probably my most enjoyable day on a chalkstream yet. It was probably down to a total dislocation from the present, as I went about reaching my limit in a very selective and focused way.
I was a little surprised that there wasn't a hatch of olives, but it confirmed similar observations in recent weeks. April and May have been unusually cold and frosty and that may account for their dearth this year. Who knows. I did see a handful of mayfly fluttering about, ignored by the trout, and it won't be long before the thrill of Duffer's Fortnight descends on the chalkstreams. I will definitely consider returning to explore the other beats at Bullington, but only after I have ticked off the other Test tributaries. Two remain!
Labels: Chalkstreams England