I initially struggled to write about this fishing trip because I couldn't for the life of me remember where in the South Island it took place. It really bugged me that I could forget such an important detail, so with the aid of a map I set out to retrace my steps and find it. It didn't help that I was using two cameras at the time and the date set on one of them was over a week out. Once I worked out the anomaly in the sequence of dates, the puzzle pieces started to fit together. I eventually found the river and access point after poring over satellite images. I was surprised to find it on the other side of the island from where I initially expected! This trip took place somewhere in the vast expanse of the Tasman wilderness.

Solving the mystery wasn't helped by the fact that I didn't take a photo afterwards for another 20 days. That's a lot of blank space to retrace. When I next popped up in a photo, I was in a glider over the town of Omarama, and shortly afterwards in a de Havilland Tiger Moth over Lake Wanaka. In something of a happy coincidence, I'm currently reading Terence Horsley's 'Fishing and Flying', published in 1947. It's a thoroughly enjoyable read because it combines two of my interests. I'm not a pilot, but ever since I was a young boy, when Biggles took up most of the space on my book shelf, and painstakingly assembled model aircraft hung by fishing line from my bedroom ceiling, I have been enamoured with the idea of man-made flight.

The opening chapter of Horsley's book describes his ecstasy in flying above Scotland and the Cairngorms in particular, "the terrain of the deer forests and the great rivers, the lochs, the precipices, the peat bogs, and the open wastes of moor."  I felt like I was in the cockpit with him as I read it. The book is also a little melancholy and thought-provoking in places, given that it's an account of the author's wartime experiences. In the very next chapter he describes meeting a fellow pilot in 1940 on the banks of the River Test. The stranger was a Hurricane pilot, whose 'nerves were as taut as the skin of a drum'. Fishing was their escape from the terror of war and they agreed to meet again on the banks of the River Test the following Sunday. "He never came. Nor do I know what happened to him. But I am sure that he had been a better man because he came to the river to fish. This is the way of fishing." I dare not begin to wonder why the Hurricane pilot failed to keep the appointment. Horsley's life was sadly cut short at the age of 45 in a glider accident in Derbyshire. His book has spurred me on to write about my own more humble fishing and flying adventures in this entry.

Back to the fishing trip. I was staying in a camp ground in a nearby town. I wanted a break from my tent so I splurged on the relative comfort of a small prefabricated cabin. It was an opportunity to recharge, do my laundry, catch up with family and current affairs, and eat some proper hot food. The upper reaches of the mystery river were only a short drive away. The literature suggested that there were only a few fish in the upper reaches, but those that were present tended to be impressively large. I liked the sound of that. Rather than taking my tent along and making a substantial trip out of it, this would only be a day trip.

The river was reached through a private farm, which in itself is an odd thing in New Zealand. There was a designated parking place at the farm, and two other cars were already parked there. I hoped the cars belonged to hikers and not anglers, as a hiking track followed the river for miles upstream, to where the mountains were tall and capped in snow. It was a glorious day, both radiant and warm, because, of course, in the southern hemisphere it was approaching high summer. 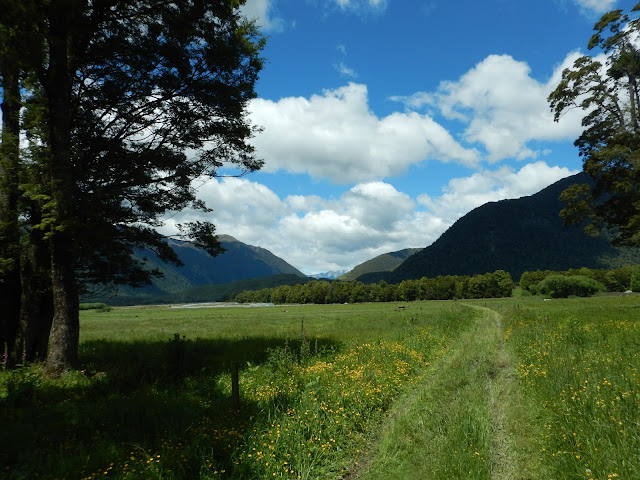 I walked through the farm pasture until I reached the river, skirting past an enormous but passive bull. It was a large river, much larger than I had anticipated. The river was tinged blue from snowmelt and it flowed at a swift gallop. I wanted to push on to where the river and mountains came together, just a little way in the distance, but I couldn't resist looking at the open water as it flowed along the verge of farmland. I walked slowly and within a few paces I spied a fish in the water, hugging the shallow margin of my bank. The trout rose and took my dry fly and made a nuisance of itself in the fast water. I climbed to the bank top and eventually netted the trout some way downstream. 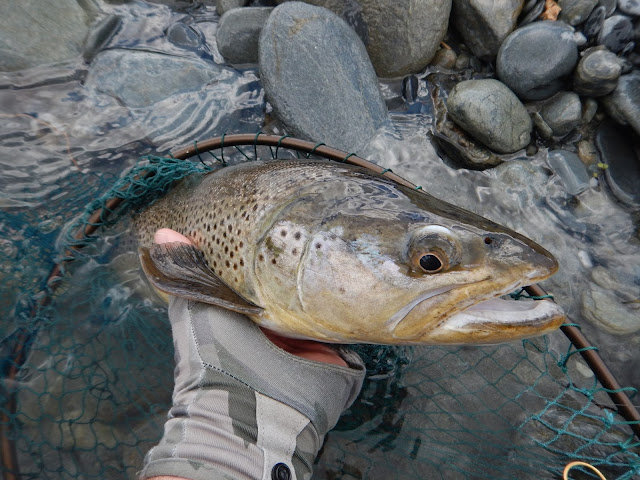 With that first capture out of the way I joined the track and walked until I met the point where the flat pastoral valley gave way to low hills. I slowed down and started to methodically scan the braided water for trout. I kept this up for around two hours without seeing a single fish, which I thought was strange because the water looked excellent.
A little disappointedly, I turned back to make for my car. I followed the track downstream, passing the odd hiker, until I reached the farmland again. I went to look at the short section of water I bypassed earlier and I was glad I did, because I saw another trout. This one was a little larger than the first, and it was holding in deeper water, some way out into the river. When I finally managed a cast free from drag, the fish rose gracefully to take a dry fly. I again had to tussle with the swift current, running downstream after the trout along the bank top. It was a lovely way to cap off several hours on a New Zealand river.
Twenty days later I cropped up in my photo trail many hundreds of miles south in the town of Omarama. As I approached the town, I spotted a glider soaring above the dry brown mountains next to the town. It looked so graceful and pure. I had always wanted to fly in a glider. I drove past a signboard advertising glider flights and, on the spur of the moment, I decided I wanted to do it then and there!
Before going up, I was given a plastic bag in case I needed to be ill. I very nearly needed to use it! The cockpit was cramped and it was stiflingly hot under the canopy because the perspex magnified the sun's heat. The tight circular turns as we rode the thermals above the mountains worked at my stomach and made me feel rather queasy. Perhaps the biggest surprise of all was the amount of wind noise. I had rather imagined gliding to be a silent and peaceful affair but the wind roared and whistled so loudly it was quite impossible to hear the instructor in the seat behind me. I did however hear him shout two words which I will never forget: "Oh f***!". At several thousand feet above the ground in a flimsy unpowered vehicle, I can tell you that those are the last two words you wish to hear. Without me realising it, we had lost the thermal and we then descended to land. It didn't bother me, because it meant I got to enjoy another take-off and landing, as we went up again and reached a higher altitude on the second attempt. It was an exhilarating experience. 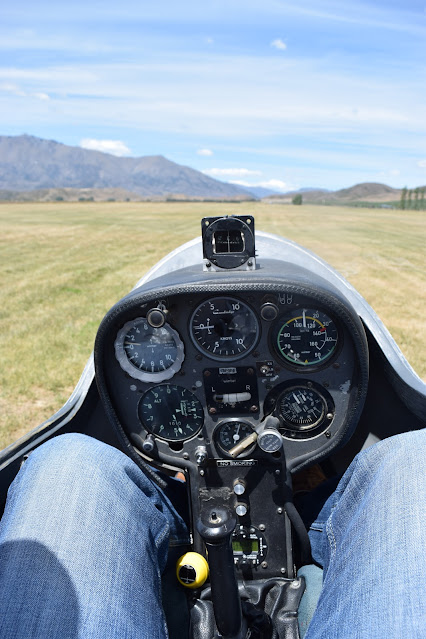 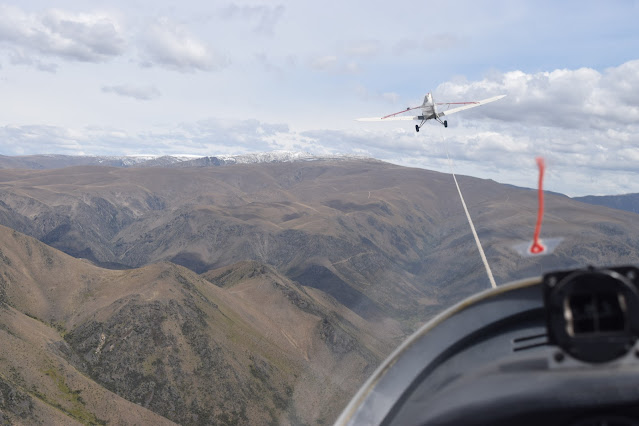 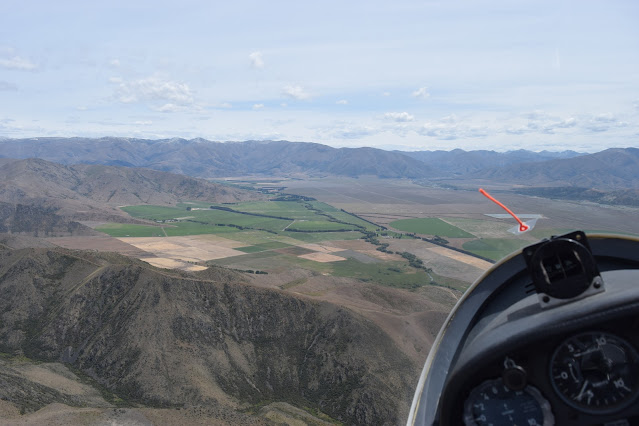 From Omarama, I continued south and passed though the town of Wanaka. The town sits on the shore of a large lake with the Southern Alps forming a spectacular backdrop in the distance. A signpost advertising vintage flights caught my attention and I needed little persuasion. I signed up for a 30 minute 'barnstormer' flight over the lake in a 1940s era biplane, the de Havilland Tiger Moth. This flight truly brought out my inner Biggles, clad in leather flying cap, goggles and a sheepskin flying jacket. The views from the open cockpit were stunning and once over the lake the pilot skilfully performed a loop and a spin. The loop was an intense and dramatic moment when I prayed my rather antique looking seat straps would hold true! 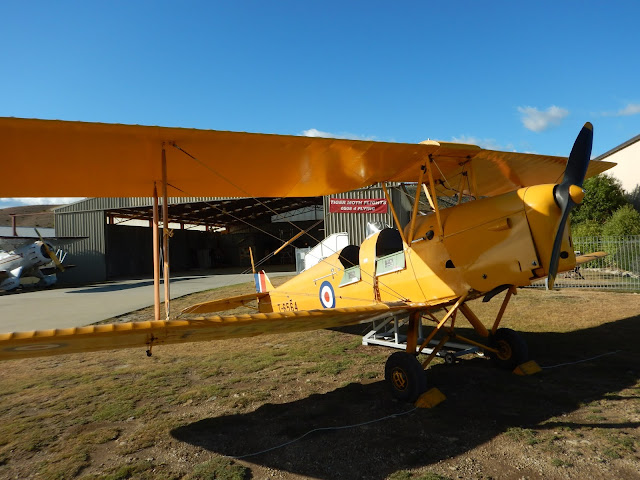 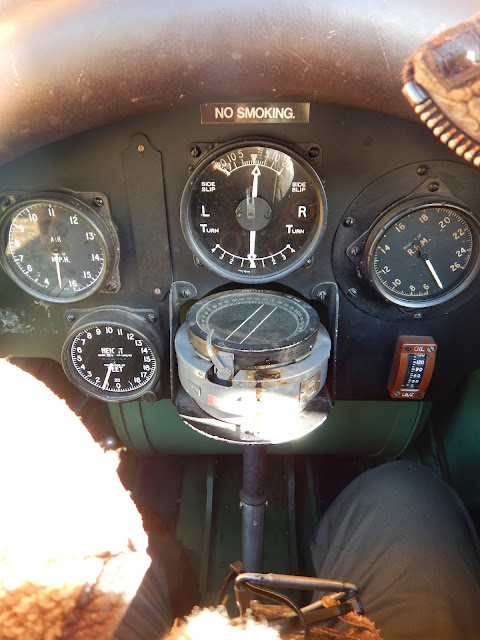 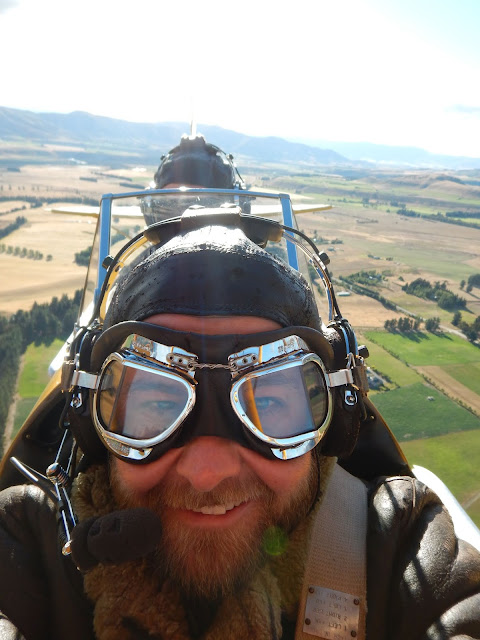 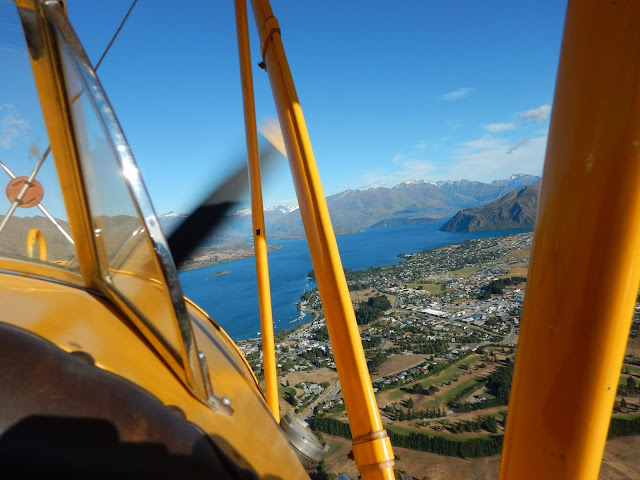 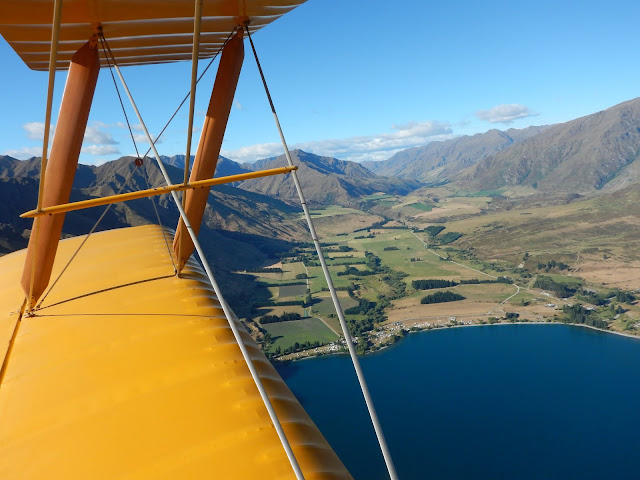 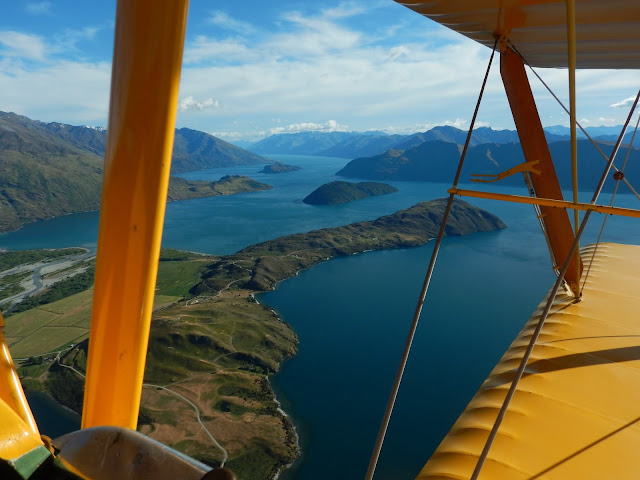 From Wanaka I pushed on south to what would be the longest and most physically taxing of my fishing trips in New Zealand. In the meantime, it had been a welcome momentary pause from fishing, pursuing other interests and capturing lifelong memories of another kind.
For a reason I can't quite put my finger on, I feel better knowing that the name and location of the mystery river is once again familiar to me. I have written it down. Fishing trips live on as memories and I now have the full picture to treasure.
Next: Journey's End
Previous: West Coast Redemption
Labels: New Zealand