With all good things in life there is a saturation point where enjoyment starts to be eroded by the quantity of consumption. Quite where that saturation point is will vary from person to person but there will inevitably come a time when fatigue kicks in from too much of something - and fishing isn't spared. The average weekend fisherman is unlikely to ever reach saturation point or even begin to consider the possibility it may exist in the context of fishing. I never would have dreamed it possible but I hit that point three years ago after spending fourteen months on the road with nothing but a fly rod and a tent, single-mindedly chasing trout in distant corners of the world. A dream to many, I’m sure, and I can imagine the faux sympathy you must be feeling! Taking nothing away from an unforgettable trip, when I eventually returned to the real world I was happy to store away my fishing gear and focus on everything else but fishing for a while. In case anyone was wondering, this explains the three year hiatus in updates to this website.

So what changed to prompt this post? First, nothing more than the passage of enough time. Second, I had family come over from South Africa in July with the perfect gift of a signed copy of Tom Sutcliffe’s new book ‘Yet More Sweet Days.’ Tom is a wonderful writer and his new book stoked the fires deep within me, especially the two chapters concerning his trips to the English chalkstreams. I’m not a million miles away from the chalkstreams, so earlier this month I drove the two hours down to the village of Stockbridge, retracing Tom’s steps, and had fun browsing the Orvis and Robjents fishing stores and feeding the large trout in the canal on the high street. I kept a few pellets for the main river Test at the end of the street and as the brief video below shows - sparked a feeding frenzy there too.


So I resolved to fish a few of the chalkstreams next year, but only where the fish are wild and don’t know what a pellet looks like. Bizarrely, these sections and beats tend to be cheaper, which will suit me just fine by the way, because the punters paying the big bucks want instant results with a minimum of effort and seem happy to catch stocked fish. And when I say cheaper, that is a relative term of course. Let’s just say I will be saving up over the coming winter months!

With my appetite whet just enough by the charms of Stockbridge I booked a weekend stay at the Arundell Arms Hotel on the border between Devon and Cornwall. The hotel advertises several miles of fishing on the Tamar system, including its tributaries. It was the tributaries – the Wolf, Thrushel and Lyd - which instantly held appeal to a small stream junkie like me. Speaking of chalkstreams, I would find out from the hotel's literature that the late Oliver Kite used to open some of his brown trout seasons on the Tamar and its tributaries. In "A Fisherman's Diary" (page 15) he even mentions staying at the Arundell Arms in the Spring of 1967, sadly the year before his premature death.  It held an appeal in its own special little way to discover that I was following in such celebrated footsteps.

The midpoint on the four to five hour westbound drive to the hotel was roughly – you guessed it – Stockbridge so I stopped in for lunch, fed the fish again, stocked up on flies and then spent a lovely hour or two looking around Mottisfont Abbey on the banks of the River Test. Mottisfont Abbey is where F.M. Halford regularly fished and has a solid claim to being called the birthplace of dry fly fishing. There were some enormous fish in the river here, gleefully accepting the morsels thrown into the water by tourists. Broken up breakfast bars seemed to be a favourite.


I arrived at the hotel in the village of Lifton just after 6pm, having followed for the most part narrow country lanes through the counties of Wiltshire and Somerset to avoid the busy bank holiday weekend traffic. Lifton, I was told, was used as a military base by the Saxons during their conquest of Devon and Cornwall so its history goes back a very long way. The hotel has been in operation for over 200 years, perhaps longer, and abounds in traditional English charm. It is built in the grey stone so typical of Devon and the décor is fishing themed. 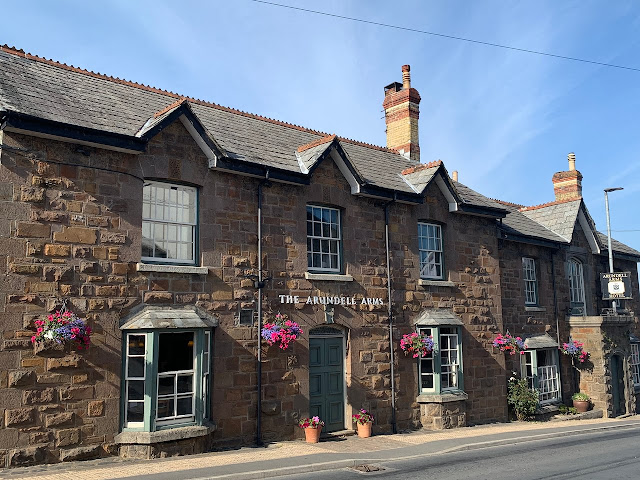 After checking in I found the resident fishing guide in the historic “cockpit” in the hotel grounds, a round stone building which used to be a cock fighting pit but now converted into the hotel’s fishing shop. It had been a hot day in the car and, as it turned out, has proven to be the hottest August bank holiday weekend on record. My first question was about the river levels. The land looked dry. Late summer fishing, before the leaves start to fall, is always challenging and my concerns weren’t alleviated by the answer: “very low, we haven’t had rain for a while”. My next question, “I’ve brought along a little 6’ rod which I haven’t used in a while and I really want to use it, where do you suggest I fish?” And so I was booked to fish the hotel’s two beats on the River Wolf the next day, almost 2 miles of private fishing. I could only imagine the provenance of the river’s name, and how ancient the name must be with wolves being extinct in England for at least 500 years. I enjoyed a delicious rib-eye steak in the bar, washed down with a local Cornish beer, before an early night in a very comfortable bed.

Fishing guides I have found possess a wonderful ability of setting expectations very low. When I arrived at the river the next morning the water had a good flow, certainly more than I was expecting. The river and its setting reminded me very much of the freestone rivers I used to fish in Wales, like the Edw and Honddu, shrouded by trees, tinged brown and hidden by sheep and cattle grazed hills. 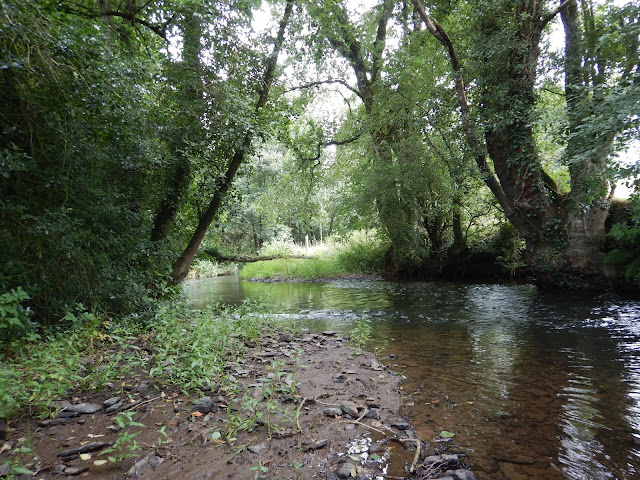 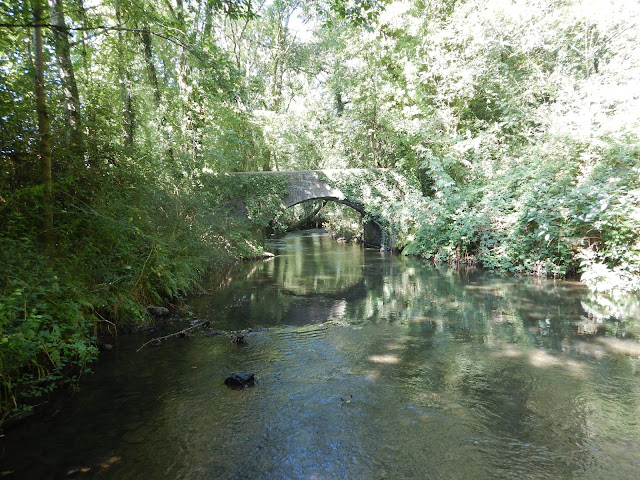 I tried at first to raise fish to a dry but after no fortune or hint of surface activity, tied a small nymph below the dry which soon sparked interest. I fished slowly and trout came consistently to the nymph throughout the day, all wild red-stippled fish. The best of the day was a fish of 11” which really pleased me because I had to work hard to get into a position to catch it, scrambling down a sheer eight foot drop into the pool below, and somehow managing not to dunk myself or spook every fish in the vicinity. Anything over 10” in this water is considered a good fish which has invariably seen at least three winters. I caught a couple of small grayling too which I hadn't expected.

A buzzard or hawk, I couldn't tell which, circled high in the sky above a nearby wooded hill for most of the afternoon, screeching its call repetitively. Walking along the river and concentrating intently on the water, I had the fright of my life when a mottled pheasant hen exploded from a nearby bush and flew away low across the farmland, cackling indignantly. At one point I was surprised by two kingfishers which shot past me at high speed, two little turquoise bullets, one chasing the other, making high pitched "zee zee" noises. The high speed pursuit came to an abrupt end a little way downstream when, after a few aerial twists and turns in the tunnel of trees, the vanquished bird made a break for cover through the trees and away from the river. The victor turned back upstream and in a blur of turquoise colour darted past me again, so close its wing beats were audible. I was impressed by the speed of flight, sadly too fast for a quick snap with my camera though. It is the first time I have seen a kingfisher in the UK. 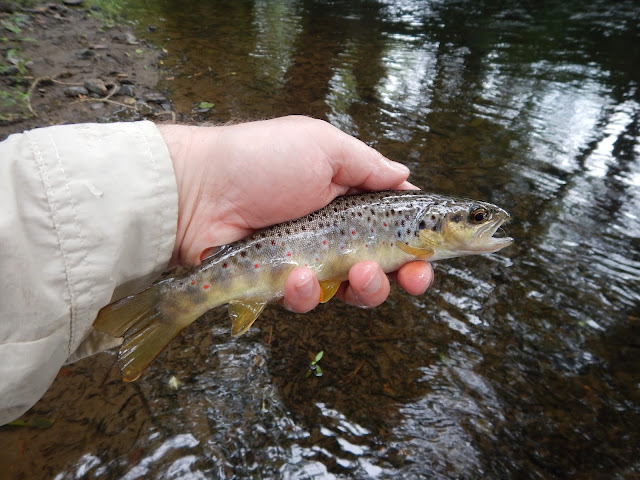 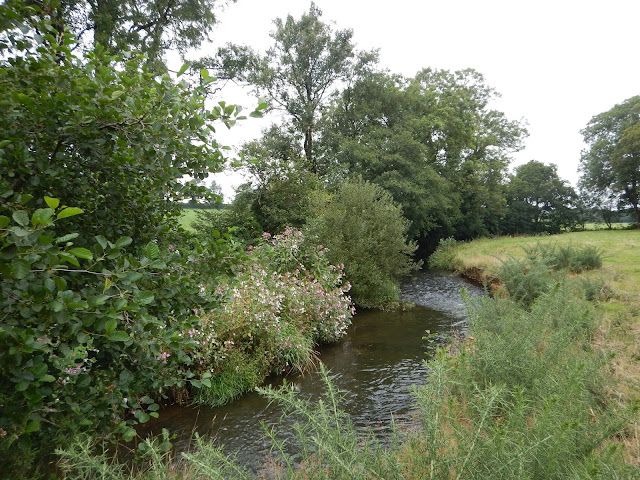 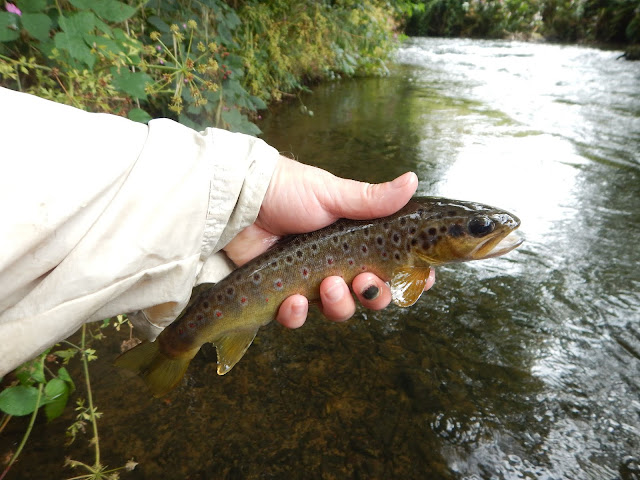 It felt fantastic to be out fishing again, except for the aches which I don’t ever recall. Fly fishing will always be intertwined with my life and I wondered why I had left it so long.

On the trip home I took an alternate route through Dorset, a pretty county with quaint villages and picture postcard thatched houses. I crossed the River Frome several times, another chalkstream, though not quite as illustrious as its Hampshire neighbours I guess. Now there’s a river I’d like to set my sights on to make my resolution of more fishing come true. Watch this space.