The sun had barely set on my first day on the Smalblaar when I woke up to the sound of my alarm clock at 4.50am on Sunday morning. I was tired and my body sore from the previous day but as soon as I hit the road towards the mountains, and the tar of the N1 slipped beneath my car in a blur, I found that my tiredness and stiffness started to dissipate, as if by magic. It’s amazing how the anticipation of a day’s fishing can shake off the cobwebs and kill the aches. A strong cup of coffee and the crisp morning air helped too. I’d agreed to meet Korrie Broos at 6am at a parking lot next to the Smalblaar. Korrie had a separate lunch engagement that day which explained the early start. We planned to fish until 11am. 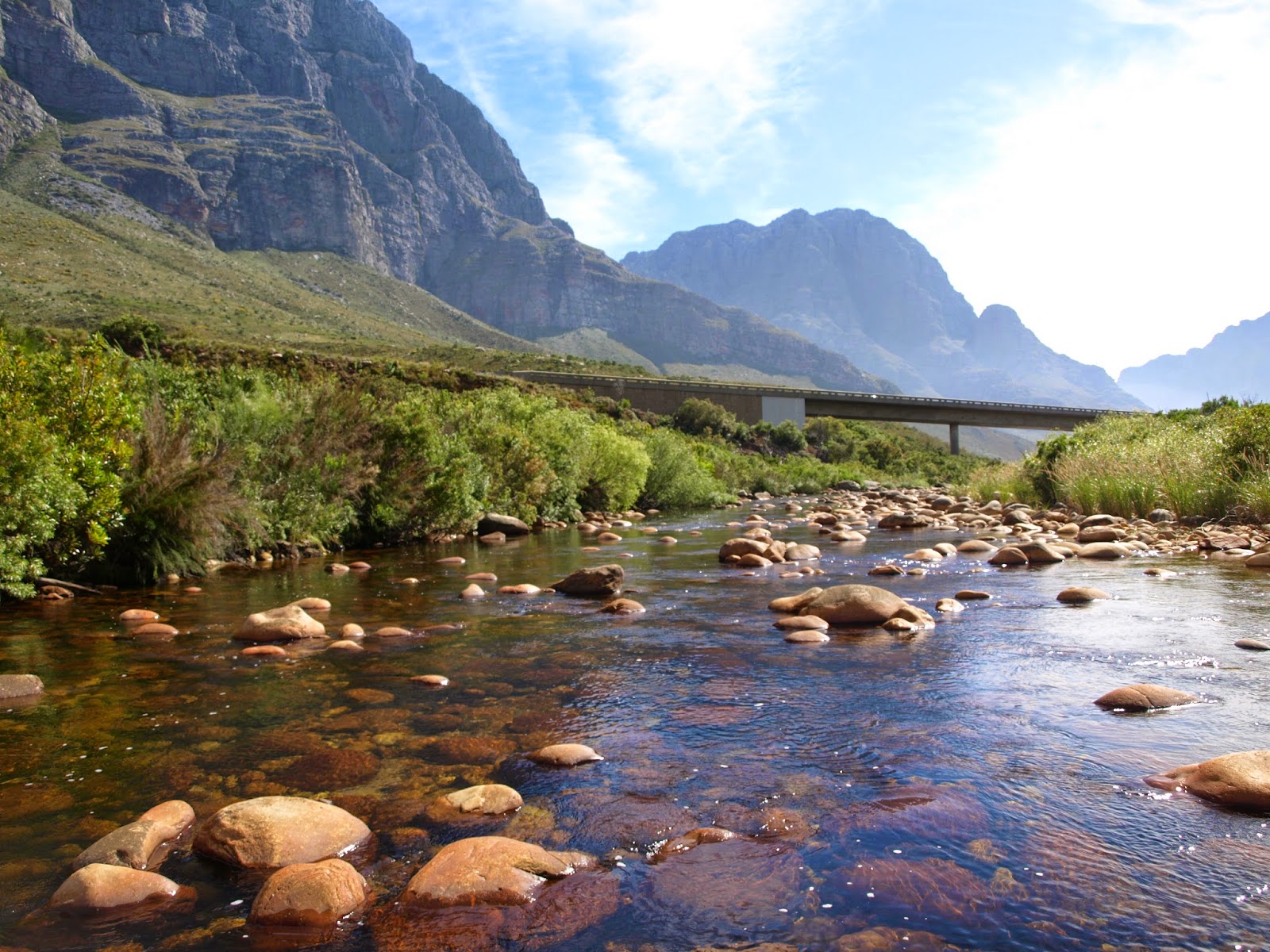 If the previous day had been a day for the dry fly, Sunday morning promised to be a day for the nymph. I had gathered from a few sources that Korrie was a bit of a “nymph nut” and this quickly became evident when he took charge of my leader, snipping away here, adding there, and tying on a hot pink spring coil indicator. On to the point and dropper were tied two tungsten nymphs from Korrie’s box (after he had looked a little disdainfully through the slimmer pickings of my nymph box). I was also shown the Pitzen knot which Korrie assured me is stronger and quicker to tie than most other knots and indeed, it looked much quicker to tie than the improved clinch knot I use.
Korrie struck me as a no frills, no fuss fisherman with a wealth of experience gained not only through his own experiences but also from fishing in the company of some of Europe’s finest proponents of nymph fishing. Korrie was eager to teach and I was all ears. 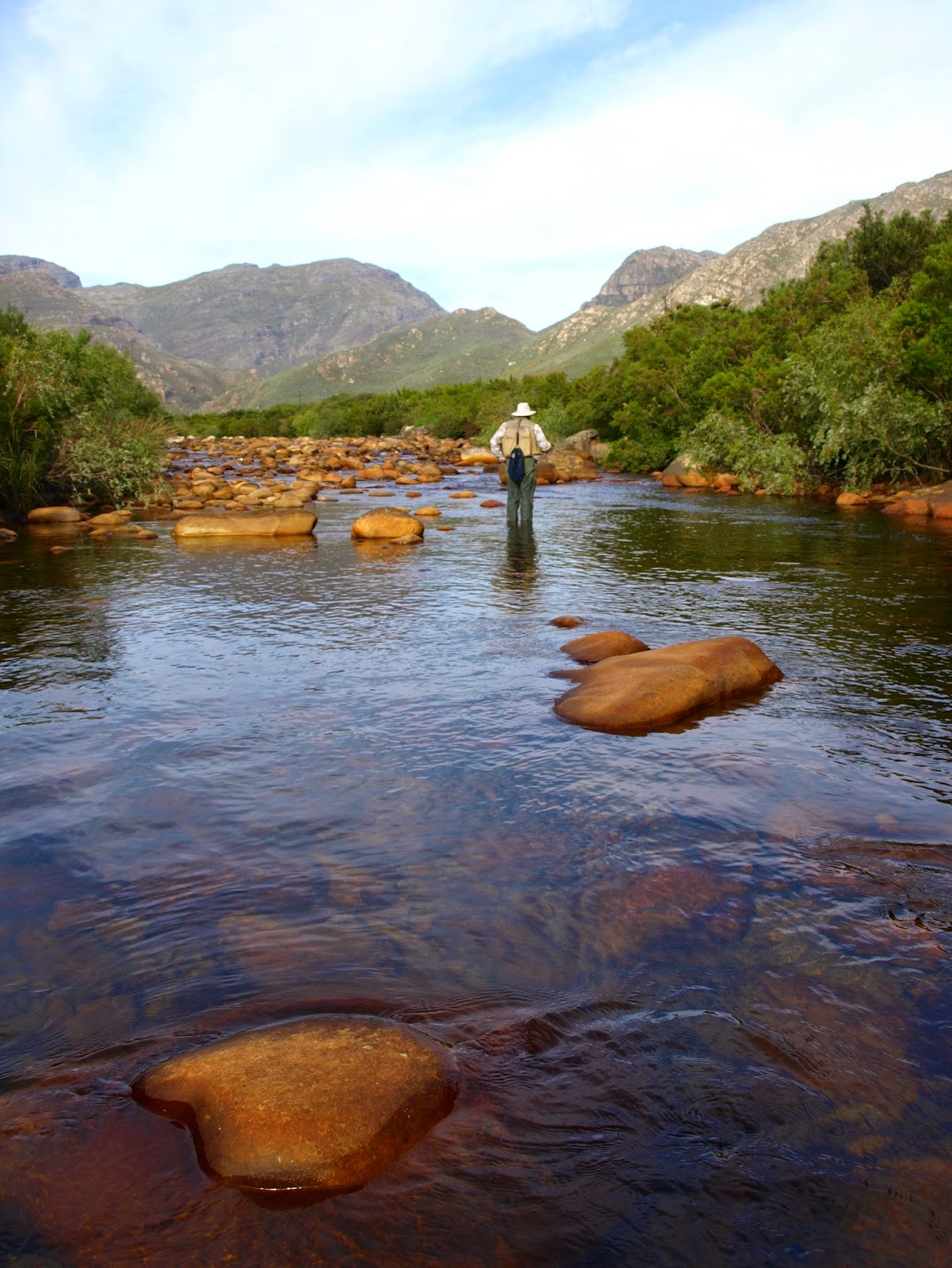 Thin, wispy clouds hung tentatively in the still air, as if they expected a wind to whip up and push them on their way, but none came that morning. It was cool and the air still crisp when we walked down to the river and started fishing at about 7am. Korrie briefly illustrated the short cast/tight line method we would adopt for most of the morning and then handed me the reins. It was a slow start, with nothing to show from the first stretch of pocket water and this seemed to surprise Korrie. 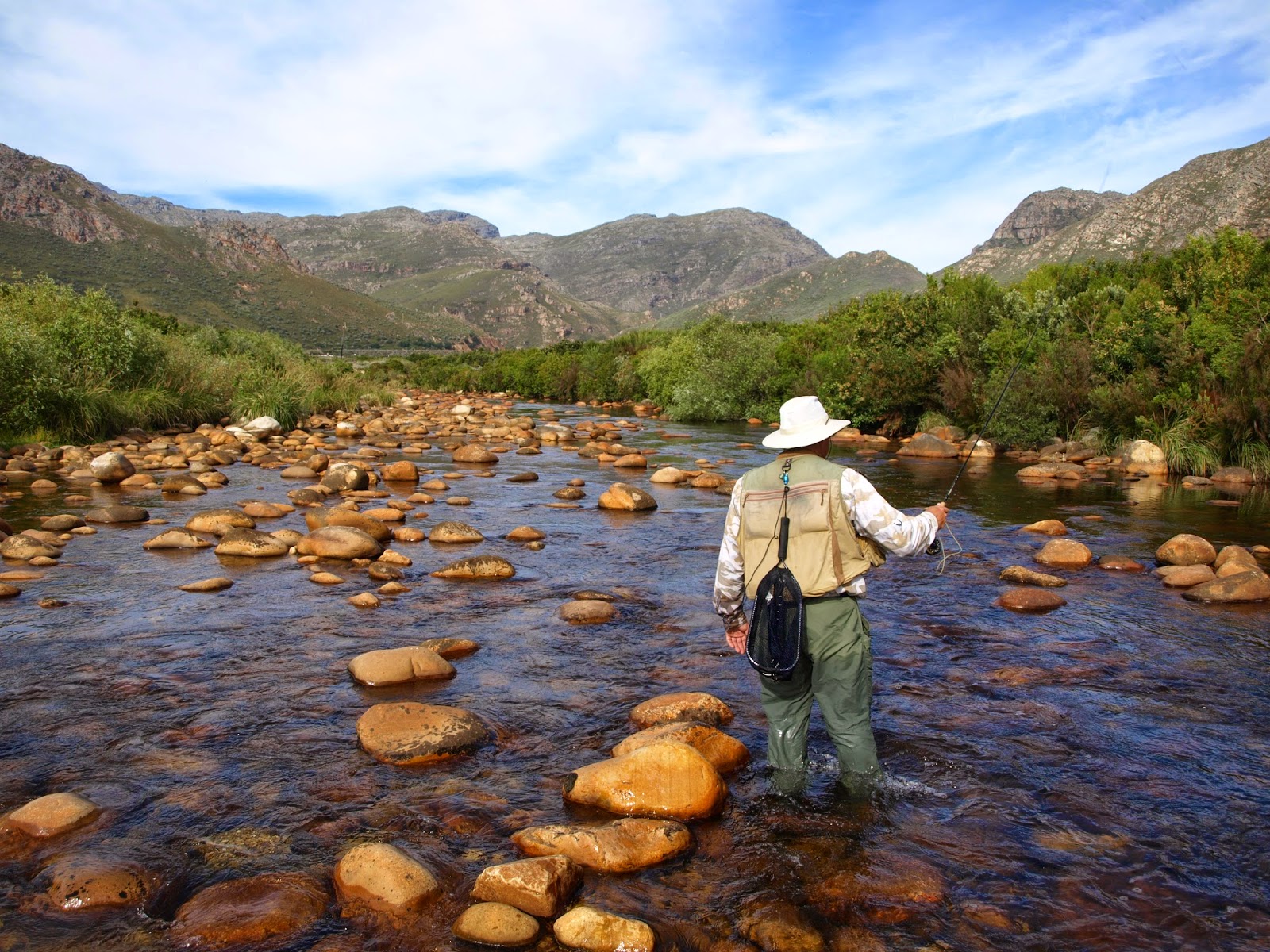 We fished through the pocket water and came to a pool where trout were sipping mayflies with something of a reckless abandon. Off came the nymphs and on went a small CDC mayfly pattern. I must have lined and spooked about two or three fish at the tail of the pool, my range not yet up to scratch. This got Korrie excitable and his language turned somewhat colourful. It spurred me on to better things as I finally got a cast spot on, right up against a bank and some leafy tree fronds where we had seen a fish show itself. Up the trout came to engulf the fly. I struck too soon and the fly didn't set. Korrie's language became even more exotic. 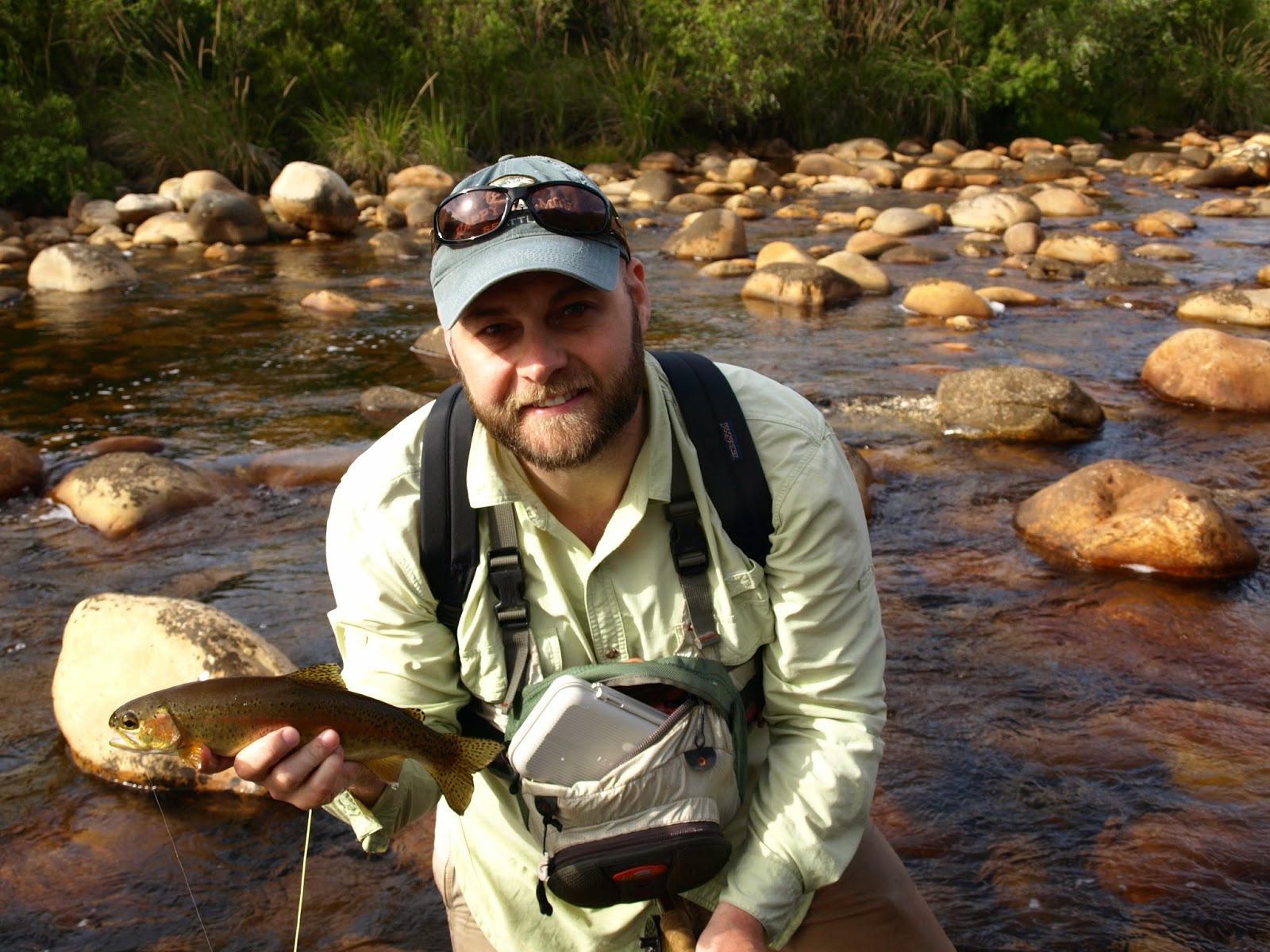 Fortunately, I made swift amends and this time it was with a nymph. I saw the spring coil of the indicator expand just a fraction and lifted the rod into a fish. Korrie beamed from ear to ear. 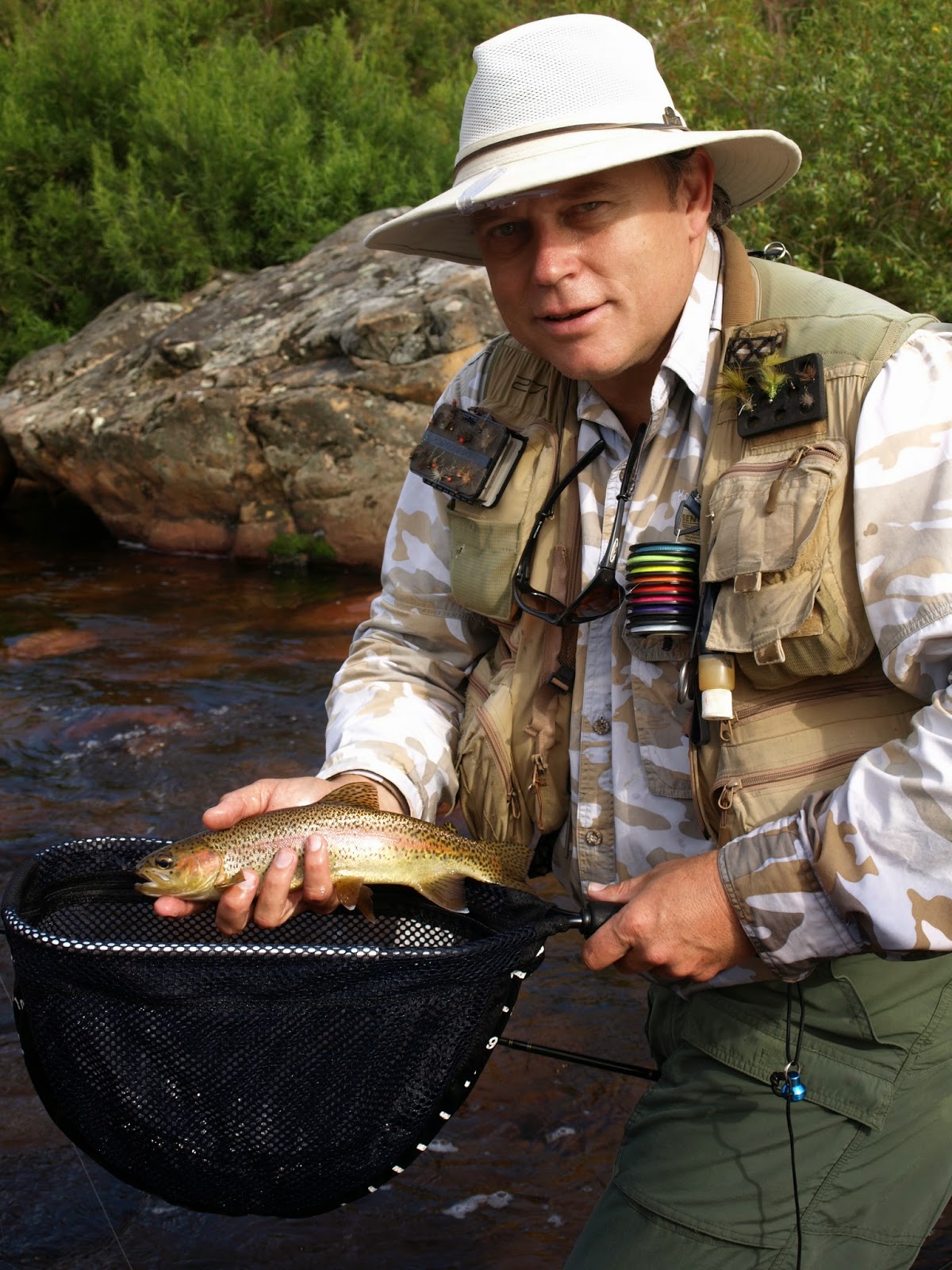 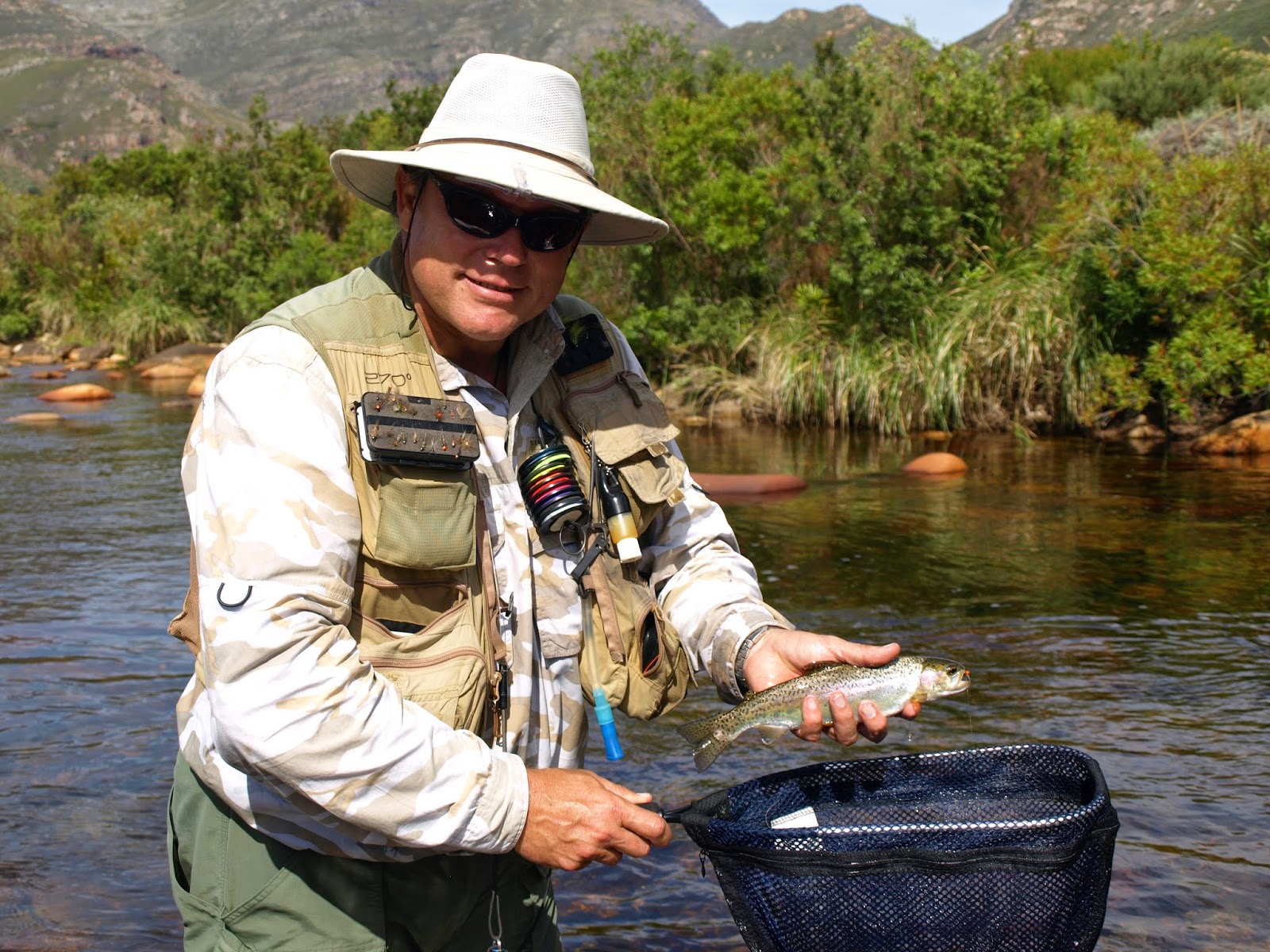 We alternated our approach to suit the water, my rod for the dry fly stuff and Korrie’s 10 foot rod rigged up with two nymphs, and I had an enjoyable morning fishing up the beat. We each picked up a few fish along the way. When faced with a choice of method (with no obvious sign of rising fish) I chose the nymph rod so that I could continue to pick Korrie’s brain on the technique. 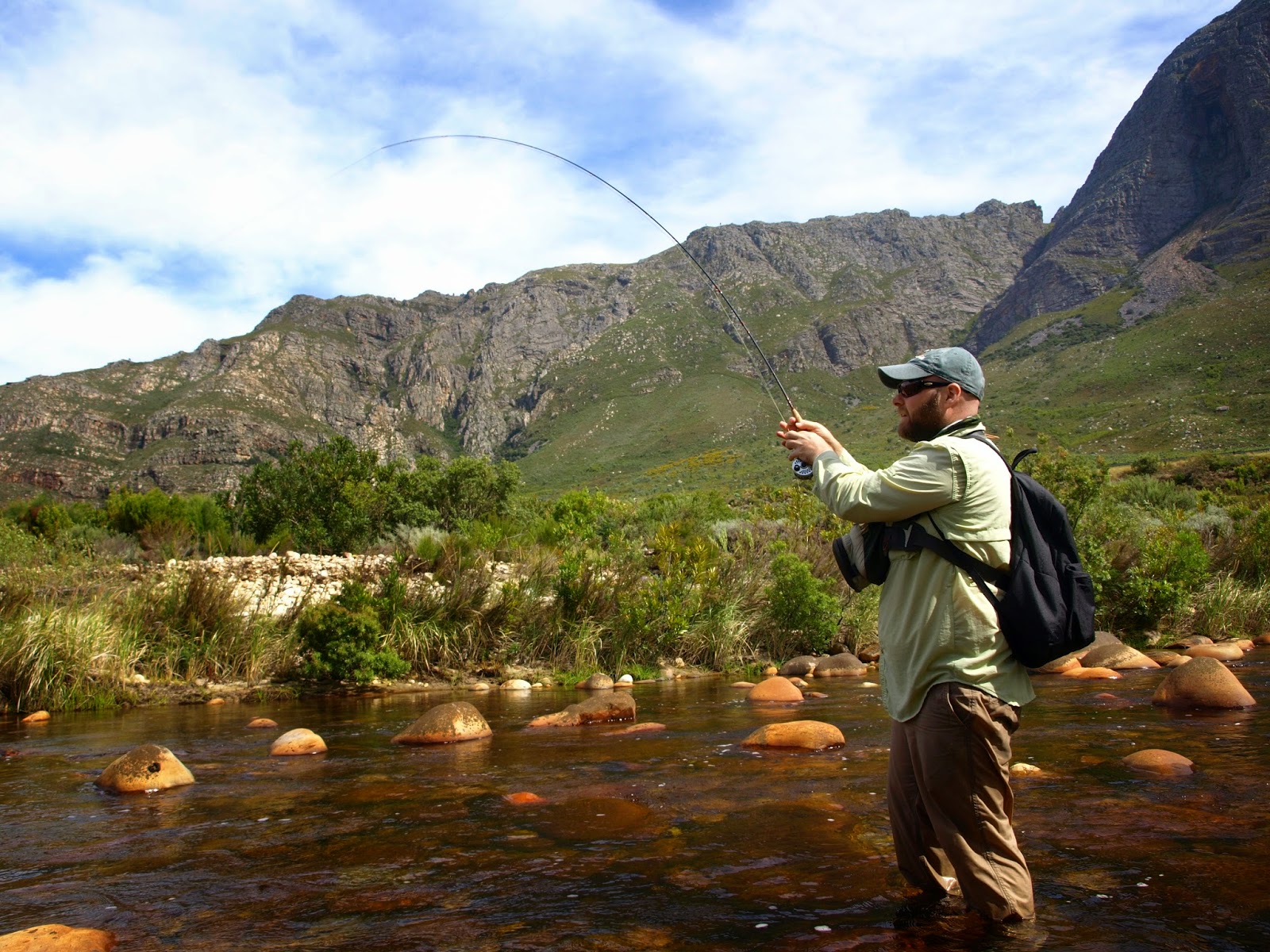 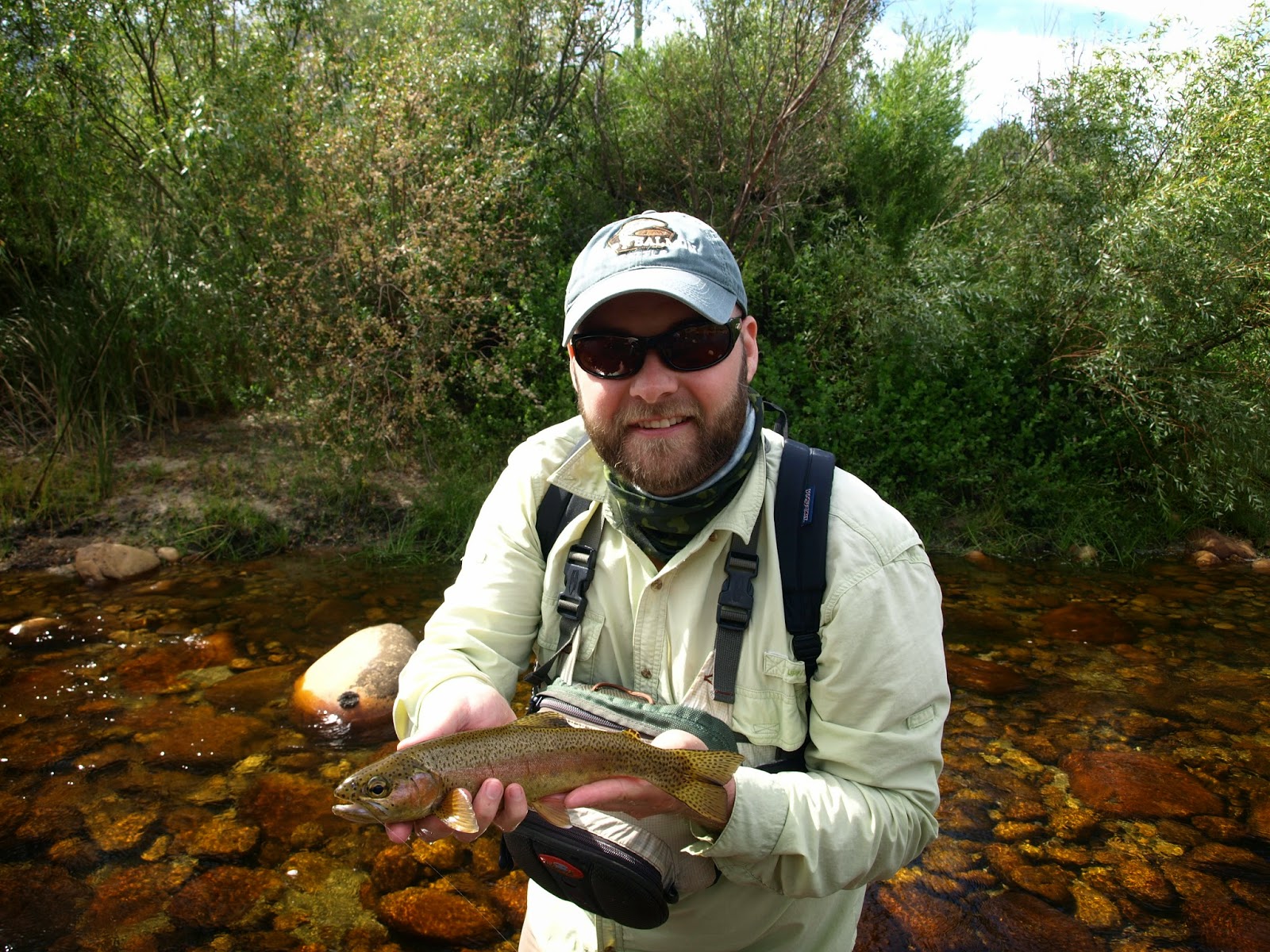 I lost what felt to be two good fish in succession on the nymph rod. The language from Korrie again turned spicy. Both were hooked right where you would expect them, either just in front or behind a boulder with a little escape hole washed out from beneath them, for the fish to flee into at the first sign of danger. I did have better joy with the dry fly after that, catching two rainbow jewels. 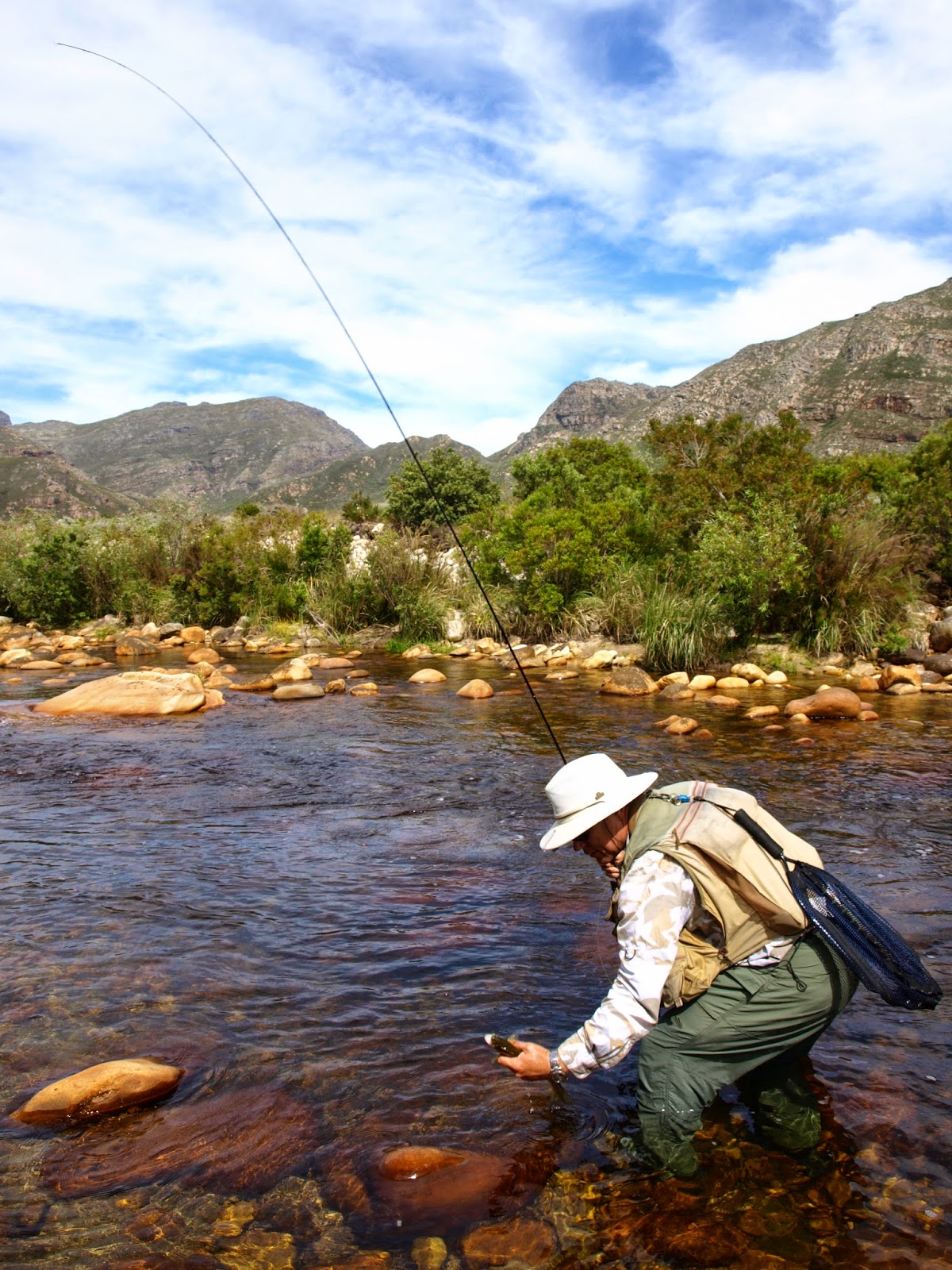 Perhaps the biggest smile of the day came to Korrie’s face in a moment of nymph vindication. I had unsuccessfully tried to tempt a rising fish to take three or four different patterns of dry fly. The fish then ceased to rise and I confidently concluded that it had been spooked, so I suggested we move up river. Korrie said “let me try the nymph” and as I was looking at my feet reeling in my excess line I heard Korrie cheer triumphantly and saw his rod bending to the pressure of a fish. He was pleased as punch that his nymph had prevailed over my dry flies. I learned another valuable lesson. It’s not over until the fat lady sings or, perhaps more pertinently, until she has a final lob with a nymph. 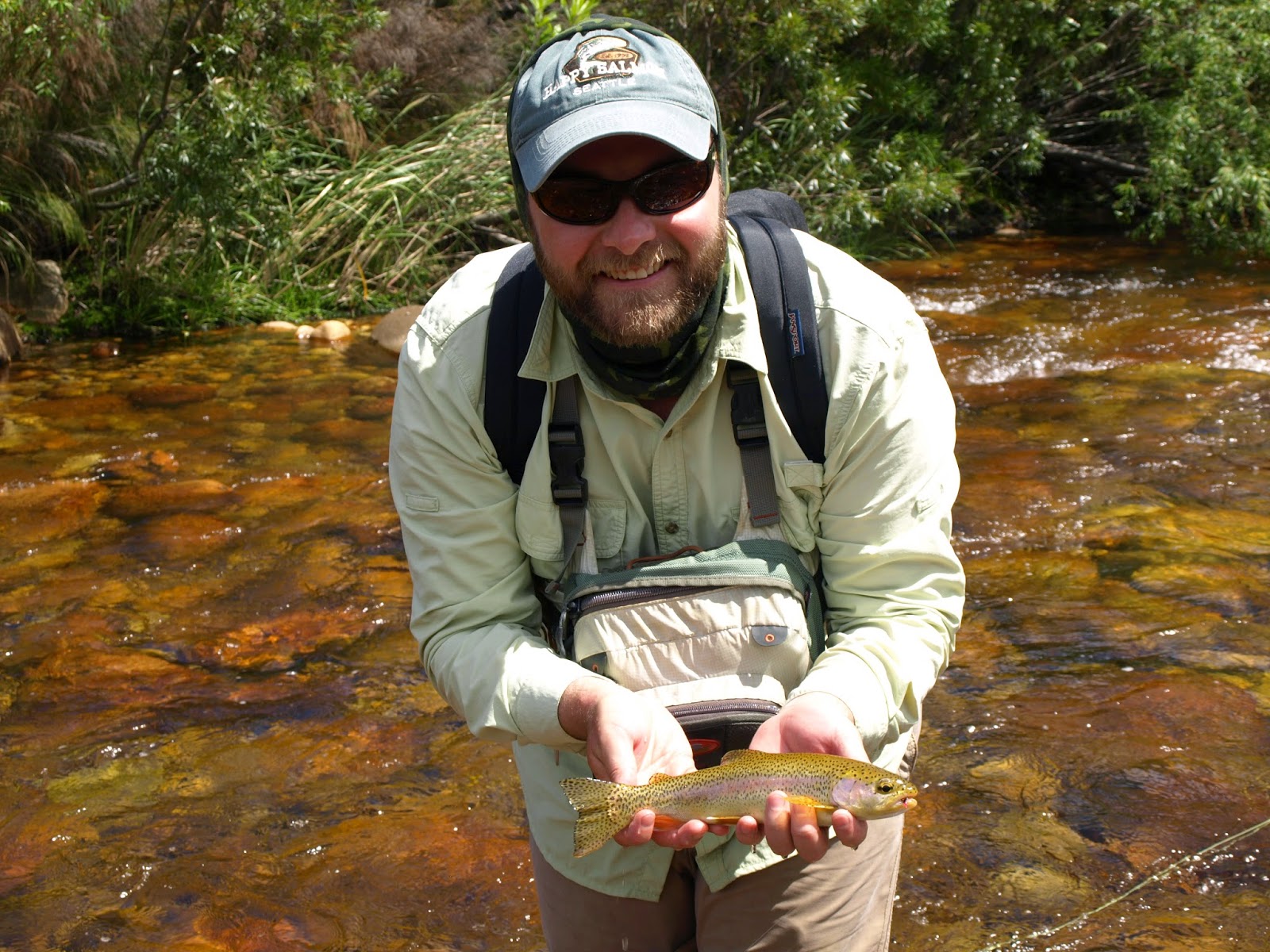 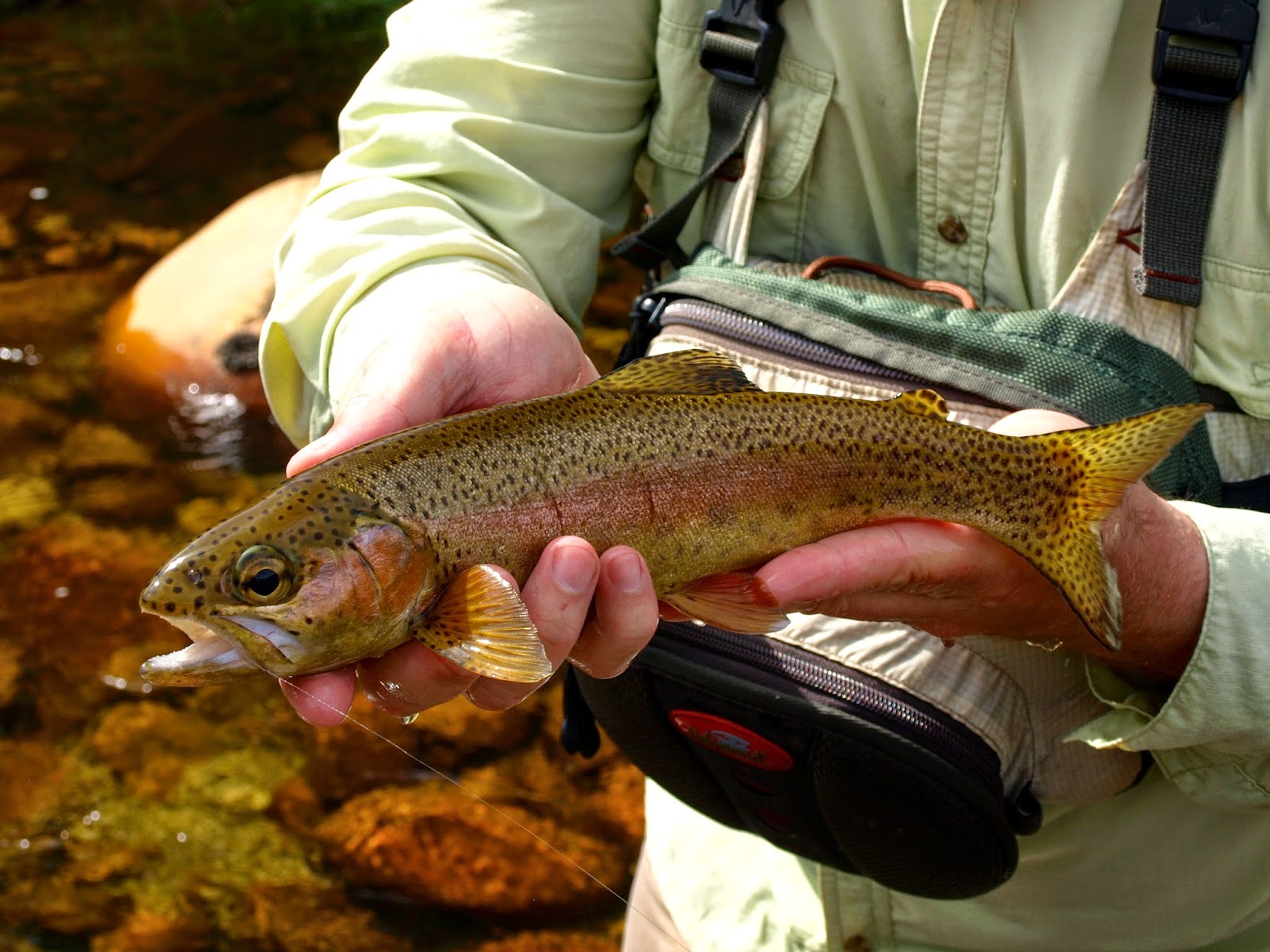 I had fun and learned a great deal. Whilst we spooked a good number of fish I was surprised how close we could get with a reasonably stealthy approach. Fish were typically caught less than 12 feet away from our boots in water as transparent as cling film. 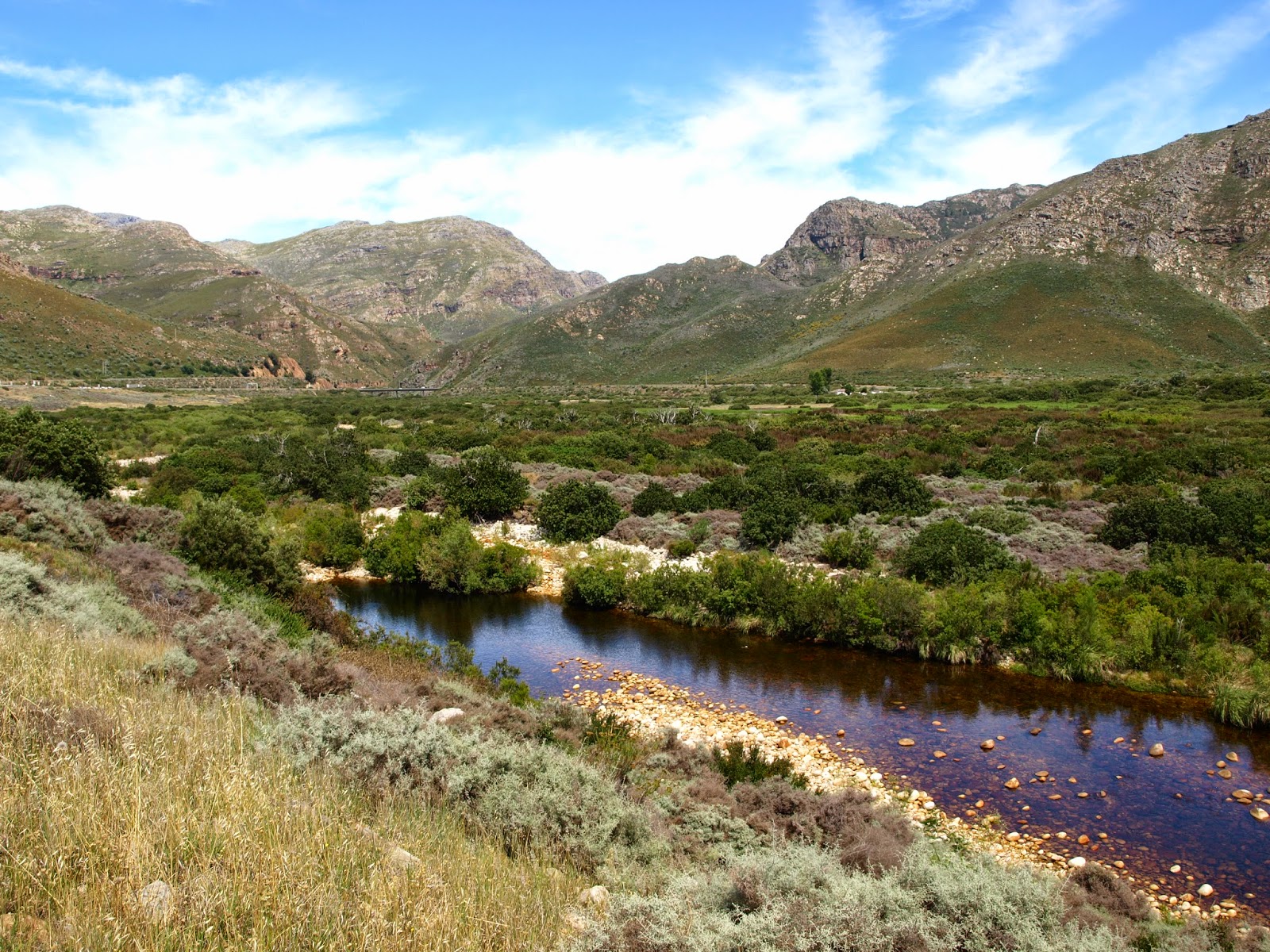 After years of wanting to fish the Smalblaar I was not disappointed. I was captivated by the river and its trout and the experience was made all the more unforgettable by my two obliging hosts. I hadn’t fished the best I could, struggling at first with the very different variety of water and fishing methods, but I picked up a few new skills and caught some lovely looking trout.
On the drive back to civilisation I decided to forego the tunnel through the mountains and took the old Jan du Toit’s Kloof pass over them. Feeling perfectly relaxed and content after two memorable days of fishing, I took it slow, not wanting my Cape fishing experience to end, and enjoyed the stunning views of Paarl and Table Mountain along the way.