The Upper Usk: A Harsh Mistress 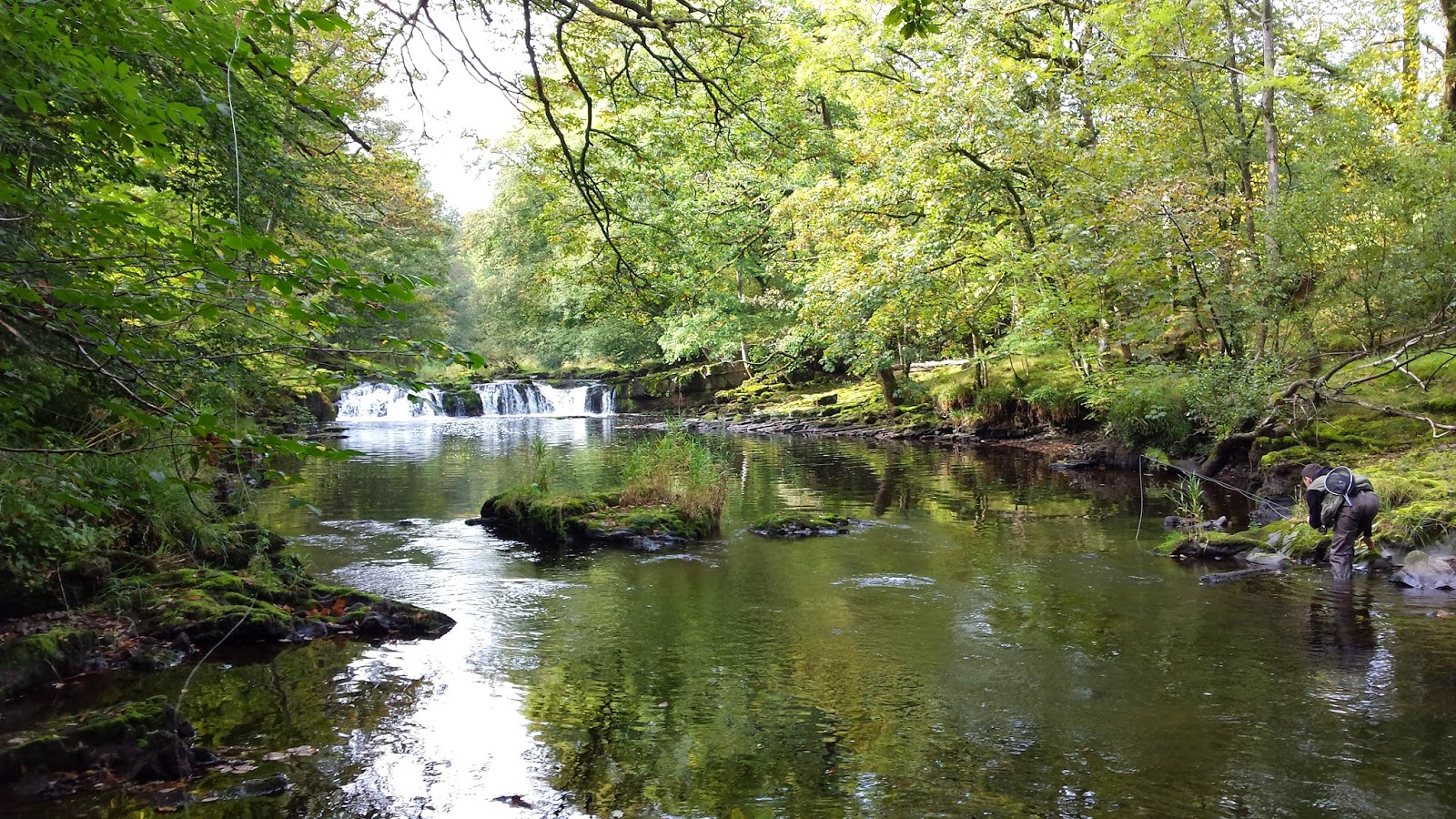 The River Usk in its upper reaches above the town of Sennybridge is a beautiful river. It is a damp place, shrouded by trees and often hemmed in by steep banks, where rocks and ground are cushioned by moss and slugs and spiders abound. We visited and fished the Pantyscallog beat yesterday under low grey skies. Trees were starting to show a hint of autumnal foliage and yellow and brown leaf litter clogged the spaces between rocks or were carried away by the current. In places the water is dark, deep and slow moving, a lethargic leviathan of a river. In other places the water tumbles over noisy waterfalls or races through boulder strewn chutes where the river is narrow enough to be traversed in a single leap. It's a place where the air is clean and crisp and the soul is instantly replenished. 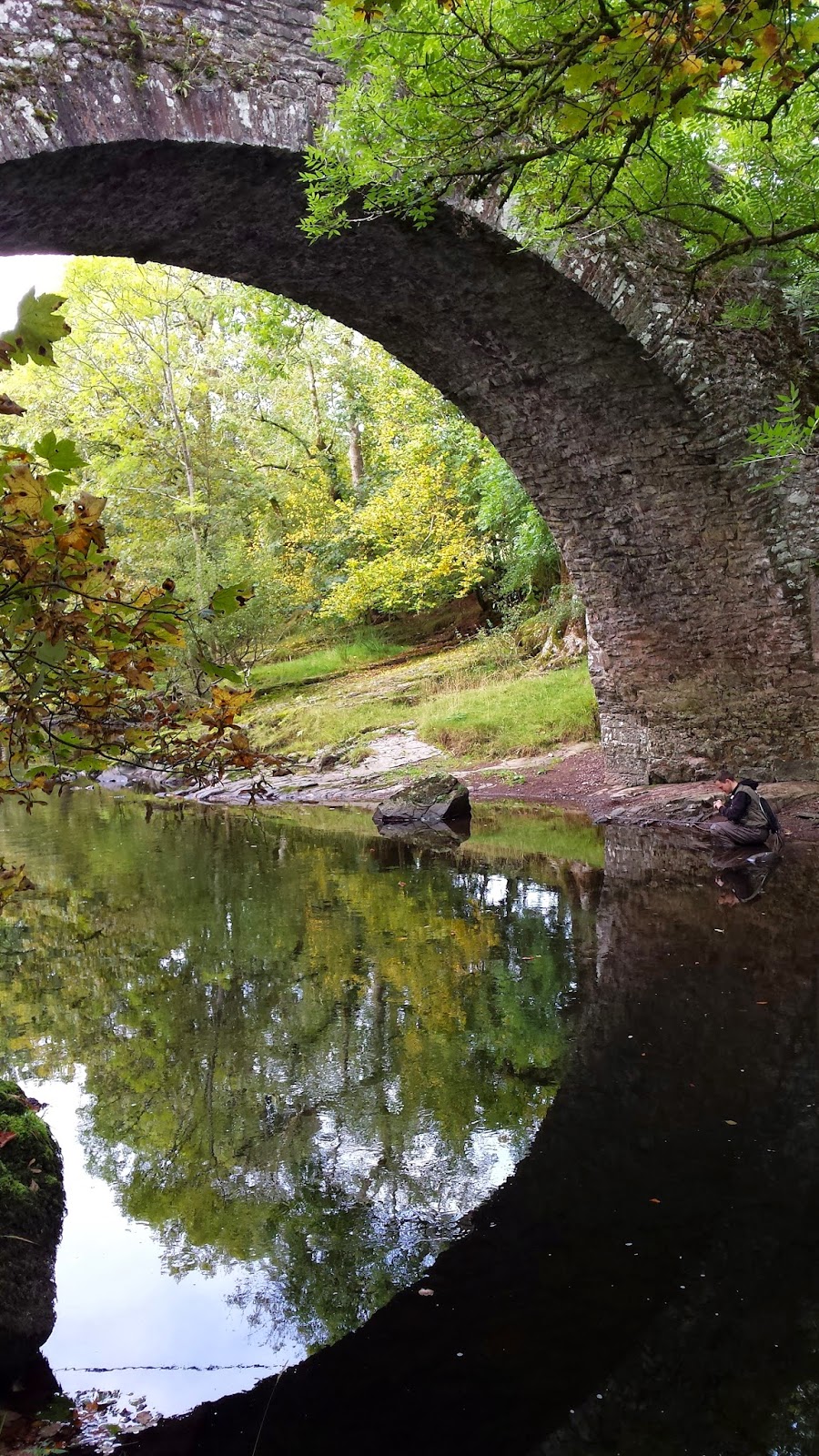 The Usk is often touted as one of the finest trout rivers in Wales, if not the entire British Isles, but she can be a harsh mistress. My last two visits to this river went unrewarded but admittedly both of those occasions were very early in the season before the river had fully awakened from its wintry slumber. In the death throes of this year's trout season, the fishing again proved difficult yesterday but at least Laszlo and I both managed to tempt a trout or two with the fly. 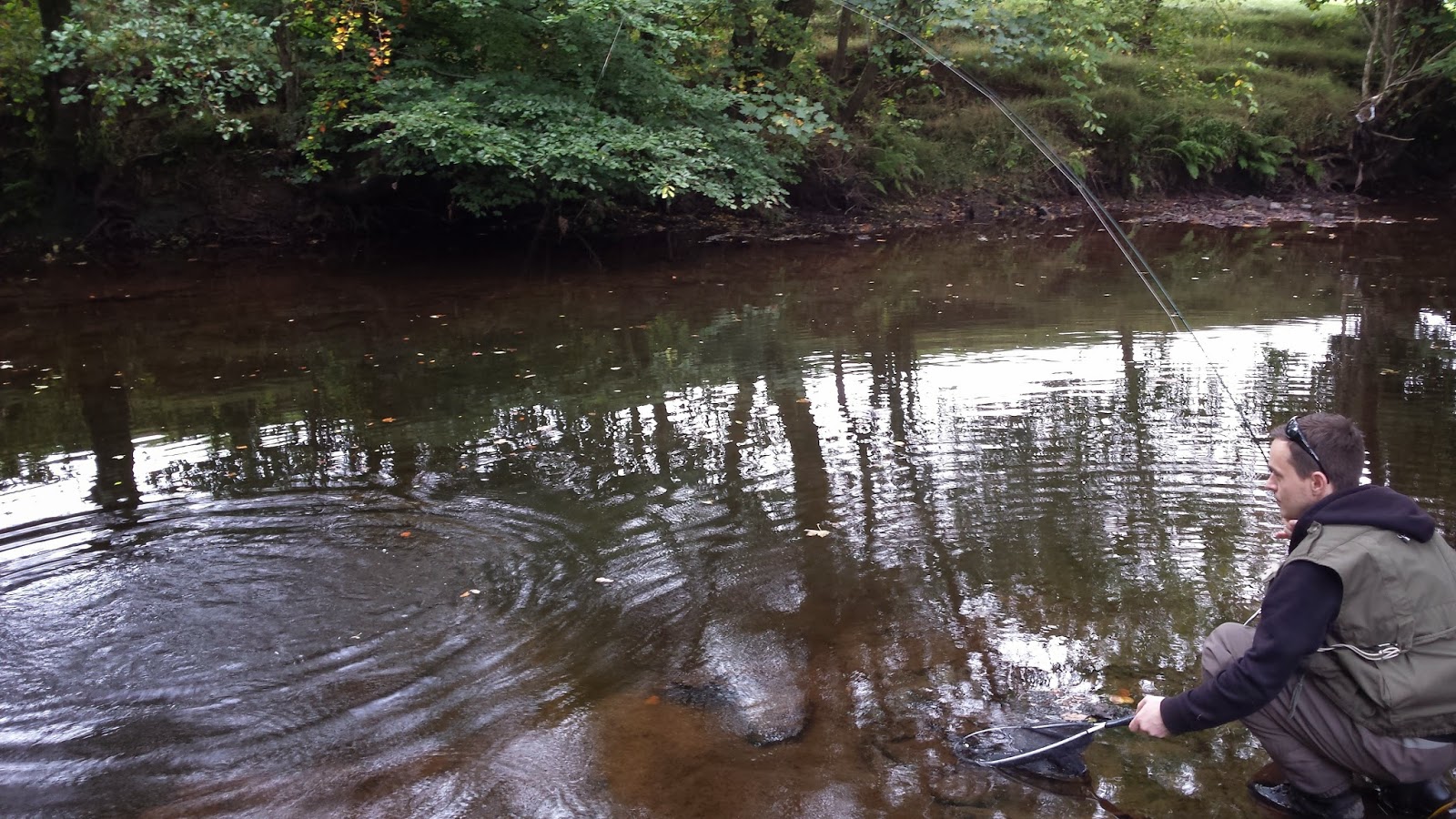 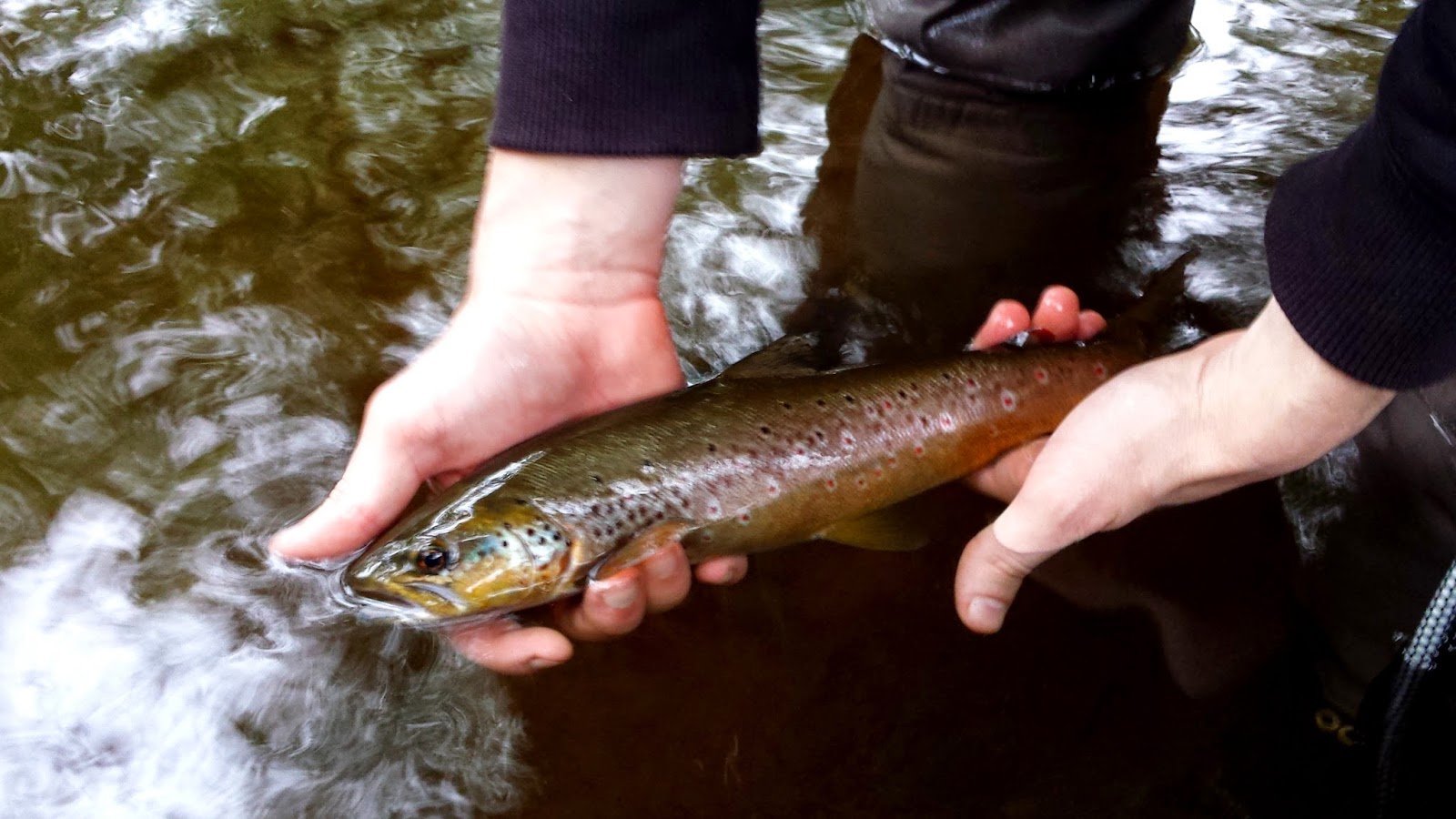 Laszlo's single trout leaped spectacularly out of the water and was the best fish of the day, fooled by a CDC emerger from a pool that hardly had any flow. The river is low after a summer of little rainfall and many of the pools appeared virtually static to the eye - foam and leaves drifted by barely perceptibly. Almost without exception the only sign of fish throughout the day was from these pools which meant most of my efforts were spent on them. Fishing deep, slow pools happens to be my least favourite type of fishing.

The day did start promisingly. Within the first hour I had lost a fish, taken one on a nymph and one on a dry, but that was to be it for the day. Not so much as a sniff after that. When trout did rise, and it was not often, I could not see what they were taking and no manner of the usual fly patterns would tempt them. I did spot a small number of what I took to be a tiny olive stonefly - they had 4 wings - and the trout may have been selectively locked on to them. Whatever the case, the fish had plenty of time to scrutinise my fly in the sluggish pools and were obviously alive to the game. 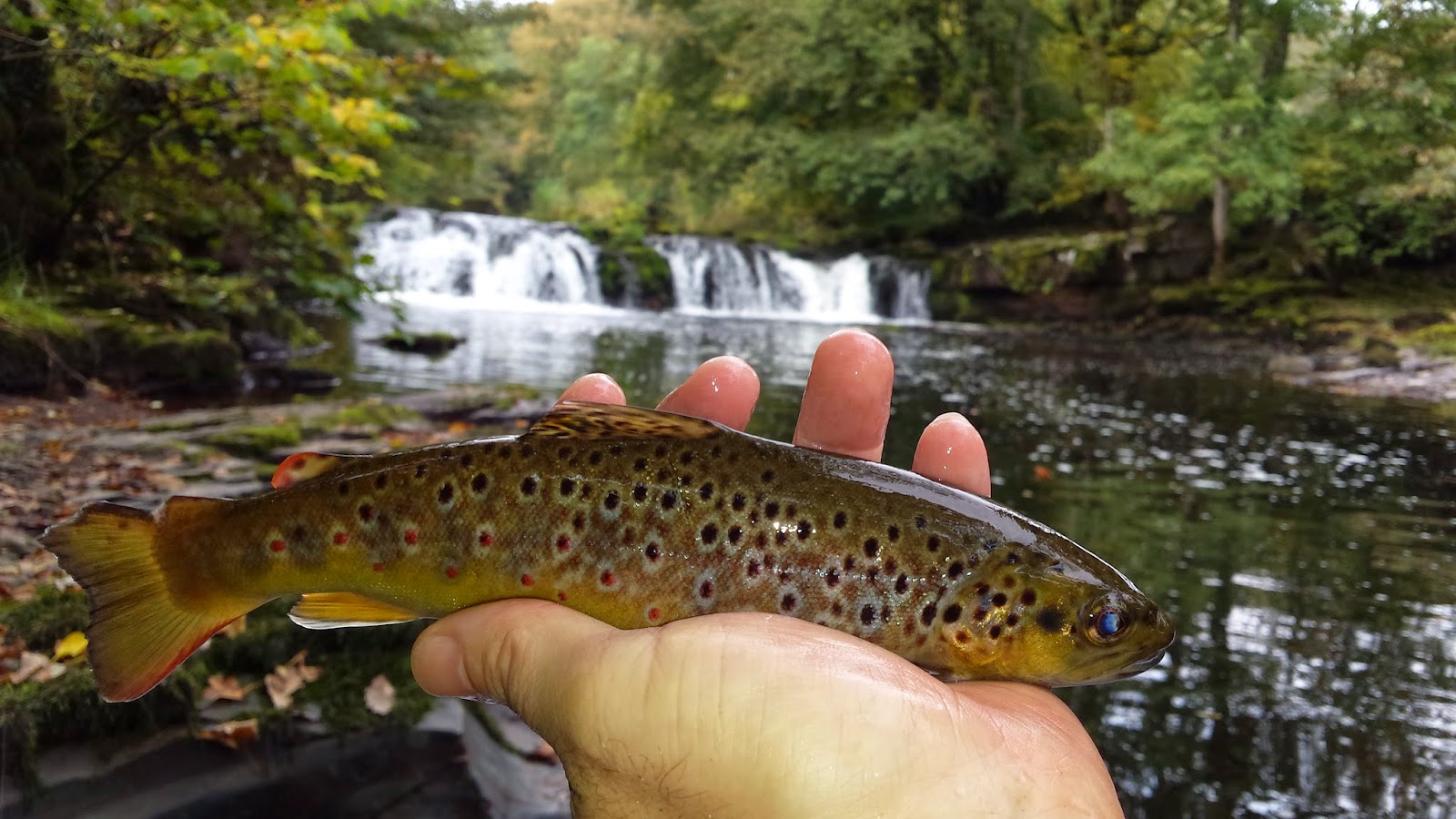 I thought I saw an otter for the very first time in Britain although it was only for a fleeting moment as the animal scampered out of sight surprisingly swiftly over large pebbles and tree roots. I distinctly recall the jet black colour of its glistening pelt which struck me as unusual for an otter. I mentioned it excitedly to Laszlo when I next saw him but in hindsight it was probably more likely to have been a large mink. Either way it was my first sighting of any mustelid species in Britain. 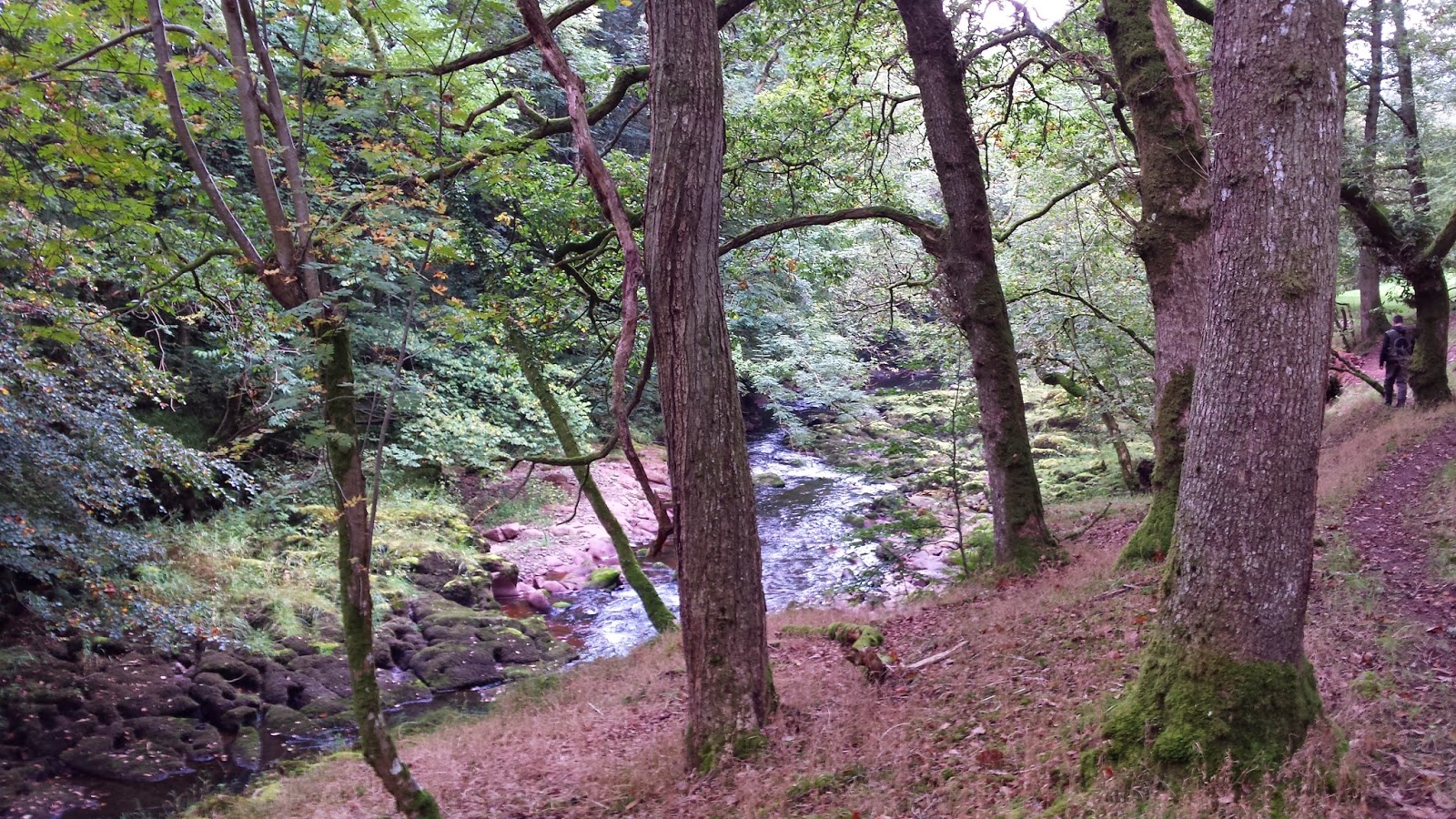 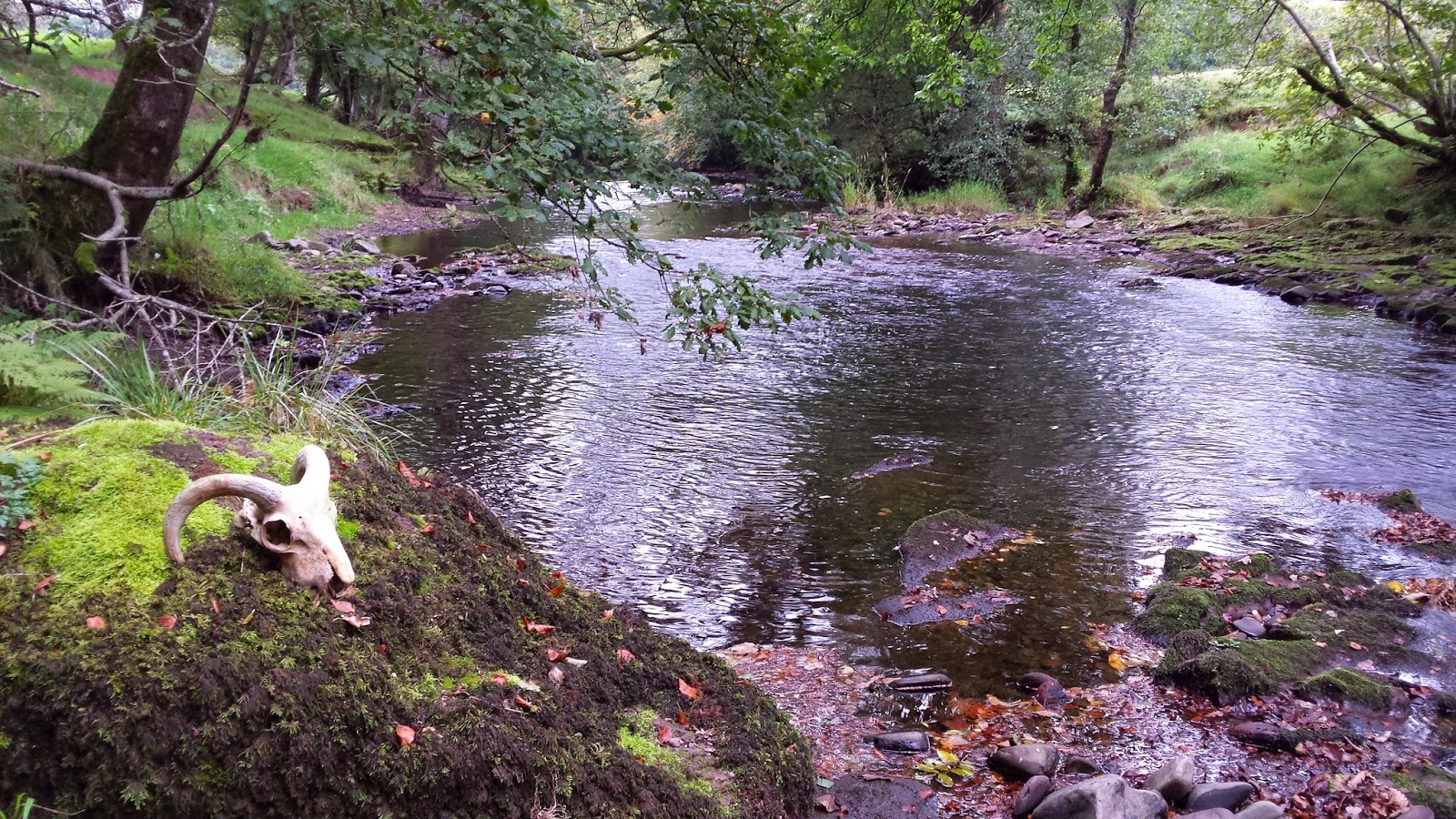 The local landowner was out walking his dogs and he stopped by to have a chat. His first words were "don't worry, it's not your fault. There are no fish here!" He told us he has owned the adjoining farm for 40 years and in that time he had witnessed the number of trout plummet. He lay the blame for the decline on cormorants, goosanders and rather curiously, the Chernobyl disaster of 1986 (I didn't know it at the time but have since learned that Welsh sheep farmers were still affected by Chernobyl sheep controls until 2012). His answer which he put quite passionately is for the Wye & Usk Foundation to stock the river with the good intentions of encouraging young children to take up fishing and for people "to once again speak in the pub about the fish they catch". It wasn't the time or place to voice my disapproval of stocking as a solution. There are fish here, albeit not in any great number, but they are wild fish in a natural unspoiled environment - part of the reason I am drawn to fishing for them. I would rather toil for one or two wild trout, and enjoy that challenge, than catch two or three or four times that number of stocked fish.

Having said that I intend my next trip to the Usk to be in late May or early June when the river and all its inhabitants are truly in the mood and the fishing is at its best!
Labels: Wales