A Sheep in Wolf's Clothing

I caught my first trout in a river in May 2009. For a long time aspirant river fly fisherman it was a treasured rite of passage. I also remember it as a bittersweet moment because the experience led to the fish's demise. I don't believe I have killed a river fish since.

It was a propitiously bright spring day in Mid Wales. Kate and I were being tutored by Andrew Cartwright in the basic skills of river fishing on the banks of the upper Severn. Sheep warily watched us whilst grazing in the fields and the yellow blossoming gorse bushes painted a pretty scene. It was Kate's first attempt at any kind of fishing and Andrew did a first class job in teaching her the roll cast and basic overhead cast in next to no time. I had been a stillwater fly fisherman for many years before that, but moving water was a perplexing and seemingly impossible animal next to lake fly fishing. The instruction was priceless. 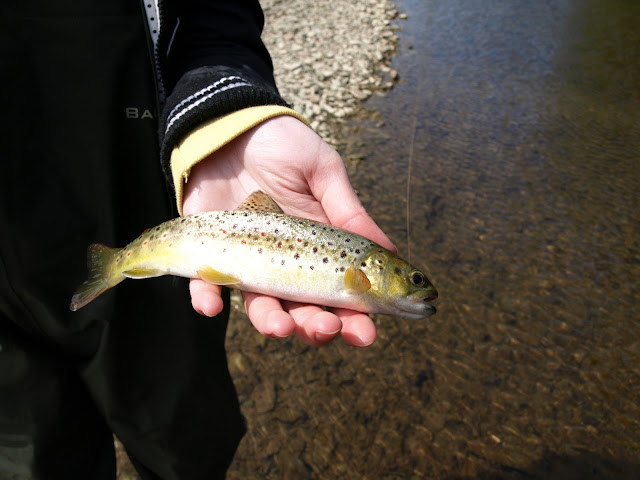 I left Andrew to continue to teach Kate and moved upstream, beyond a river bend to the next pool. Now with a vague inkling of what I was meant to do I cast my NZ duo rig into the river and watched the dry fly carefully as it floated downstream, until it was swallowed up by the tumultuous current of a tail pool. I left the flies to continue to drift downstream, unsighted, through the promising deeper water. Instinctively I lifted the rod and line and felt the unmistakable resistance of a fish on the hook. I mention instinct - that is how I like to remember it - but in reality I was probably oblivious to the take and lifted the flies out of the water to re-cast them. Nevertheless I was ecstatic, more so that I had accomplished the feat on my own. After a spirited fight I jubilantly brought the brown trout to hand. I remember the fish having unusually large, bulging eyes, which accords with the photos. 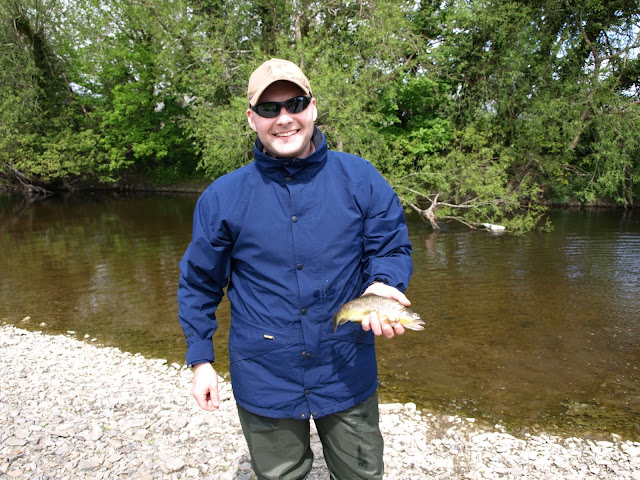 The trout had taken the nymph. Unfortunately the fly had been swallowed so deep in the throat that I was unable to remove it. I ran back to Andrew with the fish and even he could not reach the fly with his forceps. He took a view that the fish had been out of the water too long and summarily knocked it on the head to kill it. The fish wasn't wasted - we later took it into a local pub and the landlady said she would cook it for a guest. I still felt a little bad about it though.

A few weeks ago someone mentioned to me that trout are stocked into the upper Severn to complement the wild population. I was unaware of this and had assumed all the fish were wild. I went back and had a look at the photos of my first catch from four years ago and reckon it was most probably a stockie. The tail is a giveaway. A sheep in wolf's clothing. 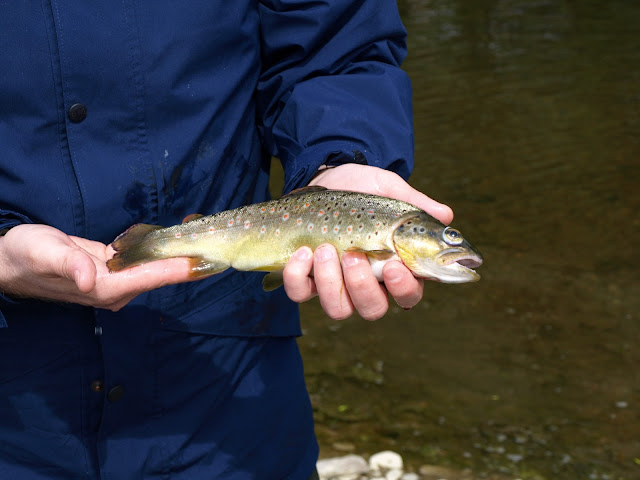 At first I was a little disappointed at the realisation, but the more I thought of it the more I have come to the conclusion that it is an insignificant detail and made it no less of an achievement for a first catch. On the bright side it has however made me feel fractionally better about the fish ending up as someone's supper.