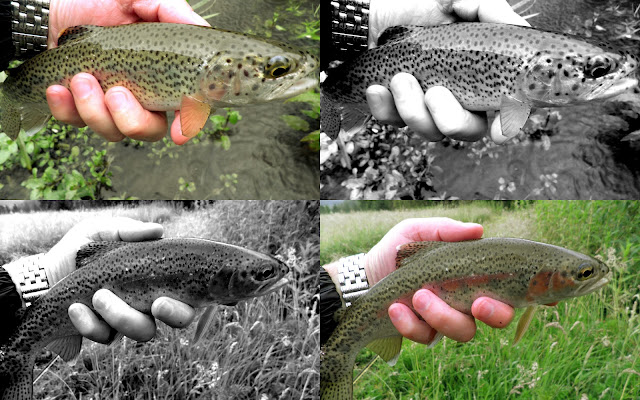 A very special population of wild rainbow trout exist in England, in the River Wye in Derbyshire.

By a strange quirk of nature rainbow trout introduced to Britain from North America appear unable to successfully sustain themselves in British rivers. The typical rainbow trout stocked in stillwater fisheries across Britain today are the progeny of generations of hatchery reared forebears and are no match for the rigours of the wild. There are however a few limited exceptions, no more than a handful of populations countrywide, where rainbow trout are known to spawn successfully in rivers. None are more successful or more renowned than the wild rainbows of the River Wye.

The first record of rainbow trout ova being shipped from the USA to the UK dates to 1885 and for the next few decades ova continued to be transported over the Atlantic in relatively small numbers. These shipments came from a very mixed brood stock assembled at the east coast waypoint of a hatchery in New York state. From the 1930s things changed when primarily Shasta strain rainbow trout ova was shipped to the UK in commercial quantities running to the tens of thousands per shipment. The first record of rainbows turning up in the Wye in Derbyshire dates back to between 1907 and 1910. The story goes that following a bad storm the rainbows escaped into the river from a lake into which they had been stocked near Ashford in the Water, and found the river very much to their liking. A theory which I gleaned from a riverkeeper based on the Wye is that these rainbows came from the initial batches of ova imported from the States, before the Shasta strain began to dominate later ova imports. Wye rainbows spawn in the spring whilst, according to the riverkeeper, Shasta strain rainbows tended to want to spawn in the early winter months of the year, and much less successfully in Britain. It is a theory supported - at least in part - by the well known American fish biologist Robert Behnke, who said "the 1885 shipment to the UK would have been highly diverse in ancestry with high heterozygosity for natural and artificial selection to effect rapid adaptive change."

The Wye is only 15 miles in length from its source near Buxton to its confluence with the River Derwent. The rainbows have been in the river for over 100 years and are largely confined to its waters and those of the Derwent which they obviously find very compatible. Whilst I wouldn't favour the idea of rainbow trout colonising other rivers in Britain and competing with native fish, as they have done very successfully in other parts of the world where they have been introduced, there is clearly little risk of this from the Wye rainbows - it would have happened already. As such, I view them as a peculiarity to be treasured for the variety they bring to British fly fishing. 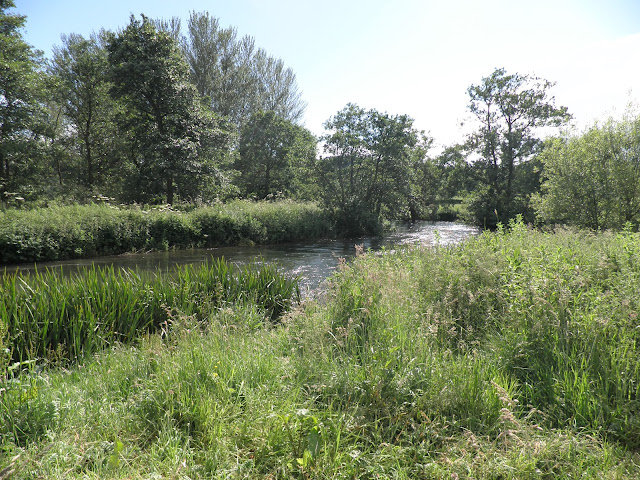 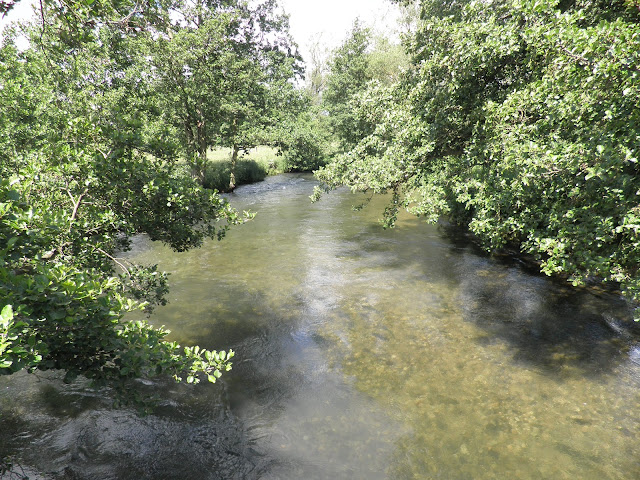 I received a very welcome and kind invitation to a day’s fishing on the Wye from fellow West Midlands based fly fisherman Steve, a member of the Peacock Fly Fishing Club which has access to a 7 mile stretch of water on the Haddon Estate. The rules of the club stipulate dry fly only and no wading. After a quick coffee and shortbread biscuit at the Peacock Hotel Steve and I drove out to the river. We parked on the banks of the Lathkill River where it joins the Wye and observed it running high and fast, but clear. We spied a fish from the stone bridge spanning the small river, effortlessly maintaining station in the fast current with an occasional flick of its tail. The weather was gloomy but as we made up our rods the sun emerged from behind the clouds and bathed the valley in warmth and colour. We followed the Lathkill downstream to its confluence with the Wye, and then followed the swift flowing waters of this great limestone river to the downstream limit of the beat. We walked slowly, looking for signs of feeding fish, but saw none. 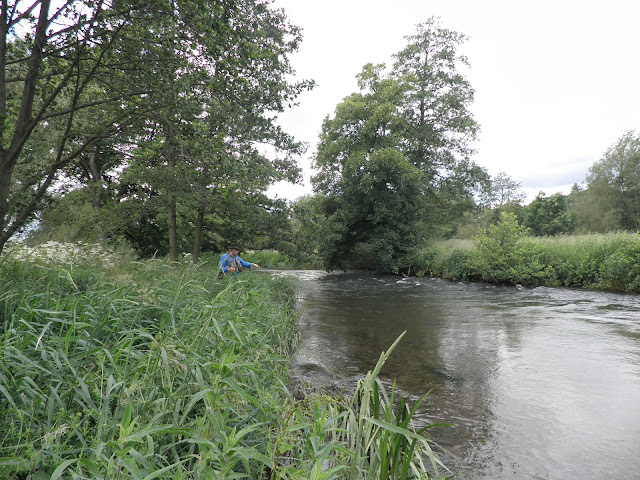 Casting was by no means easy and I found the going tough at first. Trees and vegetation made conventional casting difficult in places, exacerbated by the fast current and a gusty wind which played havoc with my fine tippet. I am so used to wading that at first it was frustrating not to have the option, but it was stimulating having to approach fishing in an altogether different way, using different methods. In most places the conditions allowed only for a rod to be threaded through the vegetation or poked over the bank side reeds to enable a fly to be dropped on to the water and drifted close to the bank. Within barely a drift or two in this fashion I spotted a fish move from under the bank to intercept my fly. The fish lifted in the water, tracking and scrutinising the size 16 Royal Wulff for a moment before sipping it in ever so gently, hardly causing a ripple to the water’s surface. It looked like a brown trout but I couldn’t be sure. I lifted the rod and the fish was on, stripping line for a second or two before the fly came loose. It was an auspicious start to the day, I felt, and a lesson not to ignore the water close to the bank – had wading been permitted I most likely would have charged straight into the water and would never have known that fish was there. 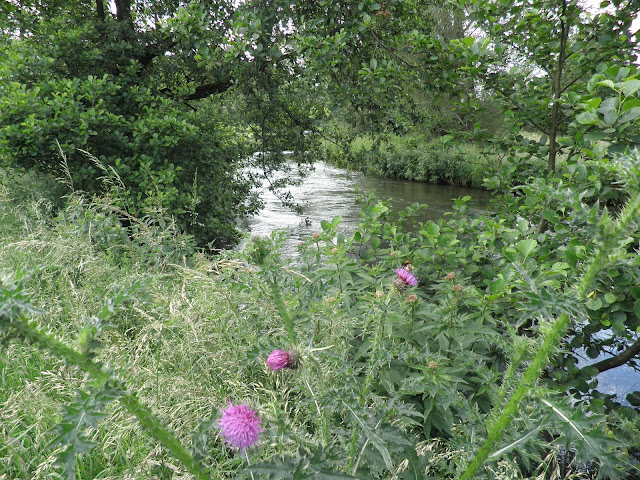 We fished the rest of the beat back up to the car without any joy. The wind had picked up and it started to rain. Unperturbed, Steve and I jumped in his truck and drove upstream to the next section. Here, again, the fish were disinterested in the dry fly and we spent at least a good two hours covering the water with our dry flies, to no avail. In one pool I did provoke three quick fire rises to a Caperer pattern, which I have since learned is a caddis which usually emerges in August and September. The fish didn't seem to know this. In a display of particularly poor fly fishing, I missed all three rises and sent the fish to sulk for a while. Then it really started to rain. Steve made for the truck and a flask of hot coffee whilst I soldiered on, determined to catch at least one of the Wye's renowned wild rainbows. 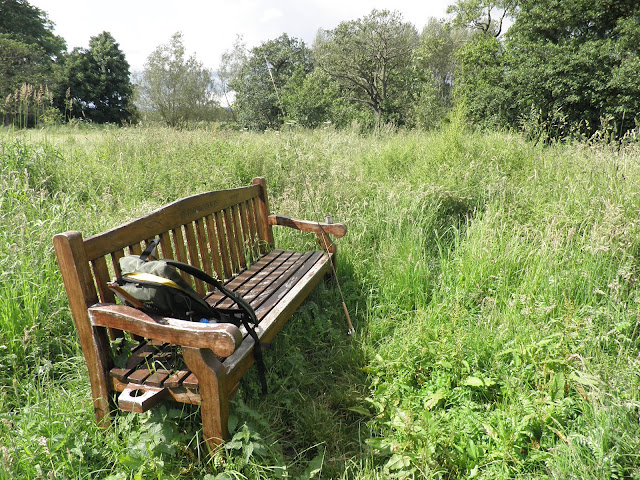 I continued to fish my way upstream. In one pool of turbulent water, I could see about 5 fish feeding on nymphs with reckless abandon. There were one or two very large fish amongst them too. I threw almost every dry fly in my box at them, but they were too transfixed on whatever hapless insects there were beneath the surface to notice or care. After a while I reeled in my line and just watched them, marvelling at the energy they were expending on such small morsels and the fluidity of their movements. The rain abated and the sun emerged from behind the clouds. I had been fishing for about 4 hours with nothing to show, and was acutely aware that I was receiving a fishing education. I sat on a memorial bench next to the river, sipped a cup of coffee, ate a chicken sandwich and watched the long grass blowing gently in the wind. I listened to birdsong and the trickle of water through the reeds. Re-energised and revitalised, I approached the river afresh, flicked the Caperer over the reeds and within an instant a rainbow trout consumed it in a splashy rise. I brought the fish to hand and admired it, my first wild rainbow trout from a river in Britain. I was impressed with the strength and fighting prowess this little fish had shown. I released it after a quick photo or two, and the clouds covered the sun and it started to rain again. That was my most enjoyable fishing moment of the year so far.


After that breakthrough moment a few fish started to rise to blue winged olives on the surface and the fishing improved a great deal. I coaxed another five rainbows to take the fly and all of them impressed me with the electric enthusiasm of their fight, the profusion of black spots on their flanks and tails and the ivory white markings on their fins. They were all perfect little specimens, the best of them about 12 inches in length. There can surely be few better fish than wild rainbow trout to catch on a fly. 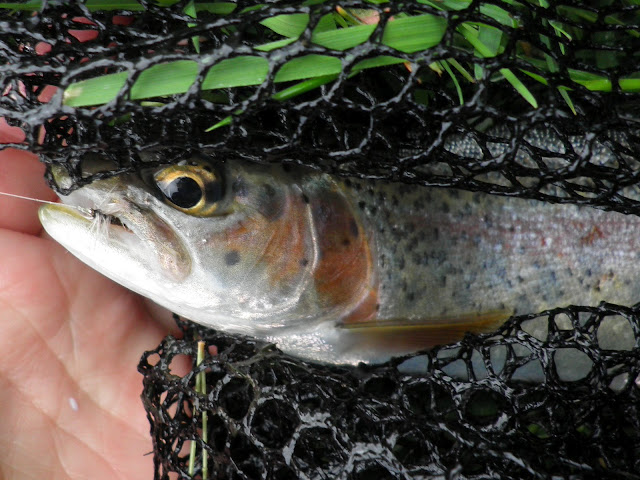 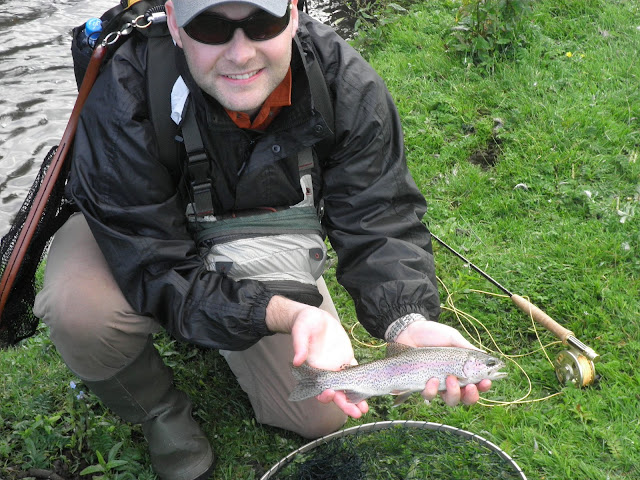 We fished till late, packed up and drove home through the town of Bakewell. Steve wanted to show me the large trout that live in the town water, fattened by bread. The fish appeared to congregate just upstream of the pedestrian bridges, waiting to be fed, and I was stunned by their size. Behemoths without fear of man, they reminded me too much of the stocked rainbow trout synonymous with British fisheries. It made me appreciate my experience of fishing a truly wild and special section of the Wye even more.